A Royal Navy jet has crashed in Cornwall during a training exercise forcing the two pilots to eject via parachute.

Locals are said to have spotted the Hawk T1 jet flying low over their homes in The Lizard area before crashing in a nearby field earlier today.

The plane is believed to have left RNAS Culdrose on a training exercise before crashing just nine miles away in the St Martins area of Helston at approximately 9.40am. 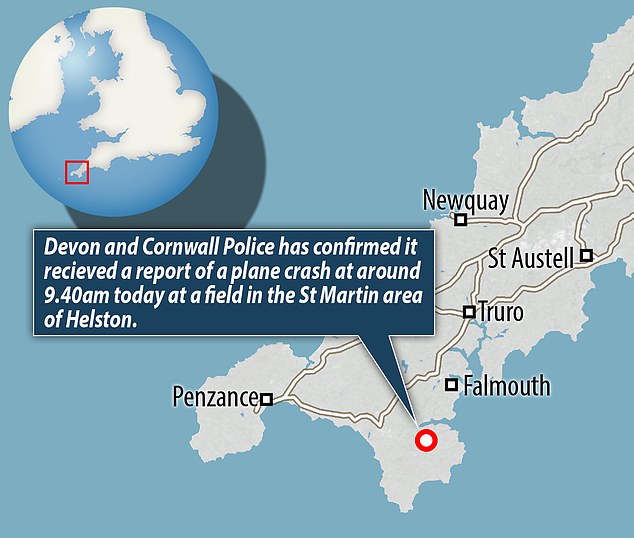 The jet crashed at around 9.40am today at a field in the St Martin area of Helston 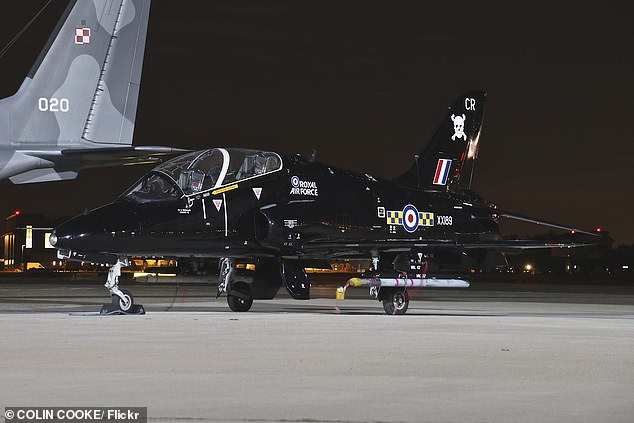 The pilots were taken to hospital after ejecting from the Royal Navy Hawk aircraft. Pictured, A stock image of a BAE Hawk T1

What is the 736 Naval Air Squadron and what do they do?

The maritime specialists use their jets to replicate the threats from enemy fighter aircraft and high-speed sea-skimming missiles.

Aerial battles between friendly and enemy jets are set up for the students to contend with, providing the live element of their training syllabus.

The Hawk jets, marked with the distinctive lightning bolt of 736 NAS, can often be found beyond the maritime environment; from close air support for land forces, to simulating attacks on helicopters to train the crews in fighter jet evasion.

The Ministry of Defence said: ‘Two pilots are being checked by medics after ejecting from a Royal Navy Hawk aircraft from 736 Naval Air Squadron during a flight from RNAS Culdrose.

‘An investigation will begin in due course. We won’t be providing further detail at this time.’

Locals said there was a huge ‘crack’ sound when two pilots ejected from the crashing twin-seat fast-jet before it banked and smashed into a field.

One woman said: ‘I saw the plane fly low over our house and then there was a crack as the two pilots ejected.

‘Parachutes open. Plane then banked left and crashed in nearby field. Just hope no one was hurt.’

Another woman who called 999 added: ‘I saw the plane flying low over our house, I heard a clunking sound, it flew on over our fields and then there was a loud crack and we saw two pilots ejecting.

‘I watched as their parachutes opened. I then saw the plane bank left and over the top of a hill before hearing a very loud bang.

‘There was no smoke or fire and I hear from locals that thankfully no one was seriously hurt.’

The primary role of 736 Naval Air Squadron is to provide simulated ship attacks for Royal Navy and NATO units in the run-up to deployment – using their jets to replicate the threats from enemy fighter aircraft and high-speed sea-skimming missiles.

Devon and Cornwall Police confirmed emergency services were at the scene of the crash and urged the public to stay clear of the area.

The force tweeted: ‘Emergency services are currently in the St Martins area of Helston following reports of a plane crash. Public are asked to avoid the area whilst first responders attend the scene.

‘Two people have been treated by ambulance at the scene and will now be taken to hospital. Their injuries are not currently thought to be life-threatening or changing.’

Mich. Mom Was Fatally Shot in Front of Kids — and Boyfriend Was Allegedly Seen Running from Home

Why is Sarah Ferguson Still a Duchess After Her Divorce From Prince Andrew?