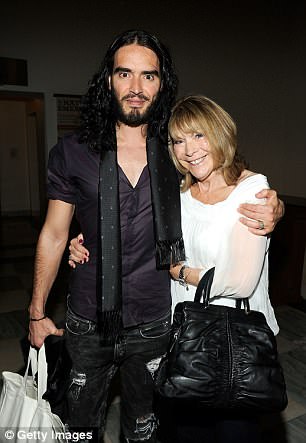 Russell Brand’s mother Barbara, right, was injured in a car crash on her way to the star’s home to babysit his 18-month-old daughter Mabel

Russell Brand’s 71-year-old mother has been injured in a hit-and-run accident while travelling in the star’s chauffeur-driven Audi A8.

The car was travelling near Brentwood, Essex when a Vauxhall Astra crossed onto the wrong side of the road and collided with the limo.

Barbara Brand, 71, was taken bleeding from the back of the car and put into an ambulance.

Brand’s chauffeur was also injured in the crash.

The star cancelled his show, Russell Brand: Rebirth, in Aberdeen and rushed to his mother’s side following the crash.

According to a statement released by Aberdeen Performing Arts: ‘Due to a personal emergency Russell’s promoters regrettably announce the postponement of Russell’s tour date at His Majesty’s Theatre in Aberdeen tonight.

‘Please keep hold of your tickets. Tickets holders will be contacted about the rescheduling of the show very soon.

‘We realise this will cause huge disappointment but we will do everything we can to reschedule the date and will be in touch with you soon.’

The driver of the Astra is believed to have escaped from the scene in a white Volkswagen Golf.

A witness told The Sun: ‘The Astra came round the corner and lost control. It went straight into the Audi.

‘The chauffeur got out and fell. Russell’s mum was trapped. She had a seatbelt across her chest. She was in pain and people got her out.

‘She was in a bad way, lying on a stretcher. She had blood coming from her nose and on the back of her head. We were talking to her, trying to keep her with it.’

The incident is believed to have happened around 11.40am.

Police are currently searching for the driver of the Astra and the getaway driver.

Mrs Brand was on her way to her son’s home to babysit Mabel. 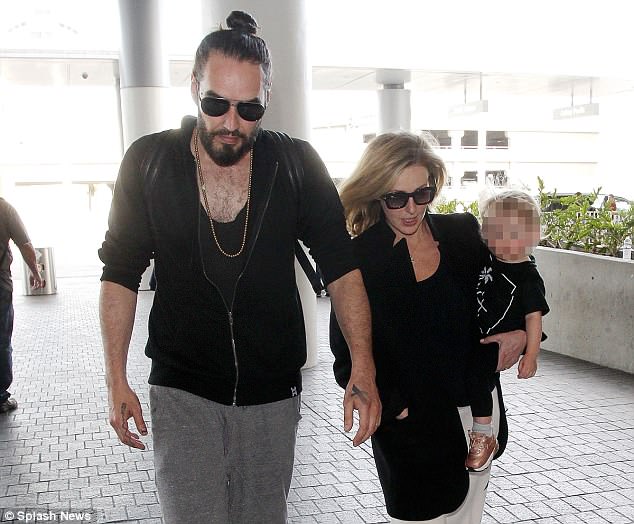 Russell Brand, pictured with his wife Laura and their daughter Mabel