Moscow: Russia's Federal Security Service has detained a US citizen in Moscow on suspicion of espionage according to a statement on its website on Monday. 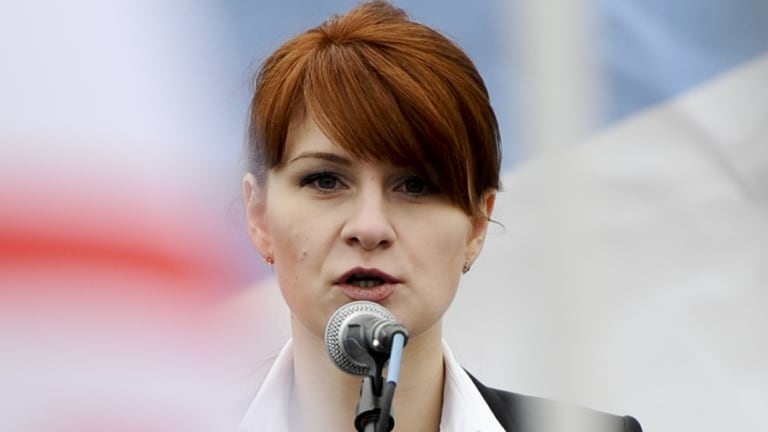 Maria Butina, leader of a pro-gun organisation in Russia, speaks to a crowd during a rally in support of legalising the possession of handguns in Moscow, Russia, in 2013.Credit:AP

The investigation department of the FSB, as the domestic security service is widely known, started a criminal case and investigations are underway, Interfax said, citing the FSB. It didn't provide any details on where the person was being held. The charges he faces could carry a prison term of as much as 20 years, according to Russia's criminal code.

The US has been alerted to the detention, according to a State Department official who said Russian authorities are expected to provide consular access to the person as required under the Vienna Convention. The State Department official didn't name the person being held, but the Russian security service identified him as Paul Whelan. His identity couldn't be confirmed independently.

David Whelan said in an email that he was Paul Whelan's brother and said that his brother had been arrested. He declined to comment on how he learned of his brother’s detention, his work status at the time of his arrest.

The detention comes amid heightened tensions between Russia and the US, including over Maria Butina, a Russian gun enthusiast who pleaded guilty earlier this month in the US to conspiring to act as an unregistered foreign agent.

Butina said in court that she'd been operating as a Kremlin agent as she befriended National Rifle Association leaders and influential US conservatives.

Russian President Vladimir Putin spoke out about the case on December 20, saying he didn't understand why Butina was detained and that he would support her.

Spy scandals have also rocked diplomatic relations recently in other parts of the world. Earlier this month, a third Canadian citizen was detained in China. The detentions came as Beijing fumed over the arrest of Huawei Technologies Co. Chief Financial Officer Meng Wanzhou, who was arrested in Canada this month as part of a US extradition effort.

Sky Q, Freeview and Virgin viewers will unlock dozens of free movies to watch next year