MOSCOW/MINSK (Reuters) – Russia said on Sunday it had told Belarusian leader Alexander Lukashenko it was ready to offer military assistance if necessary as demonstrators held the biggest protest yet against what they call Lukashenko’s rigged re-election. 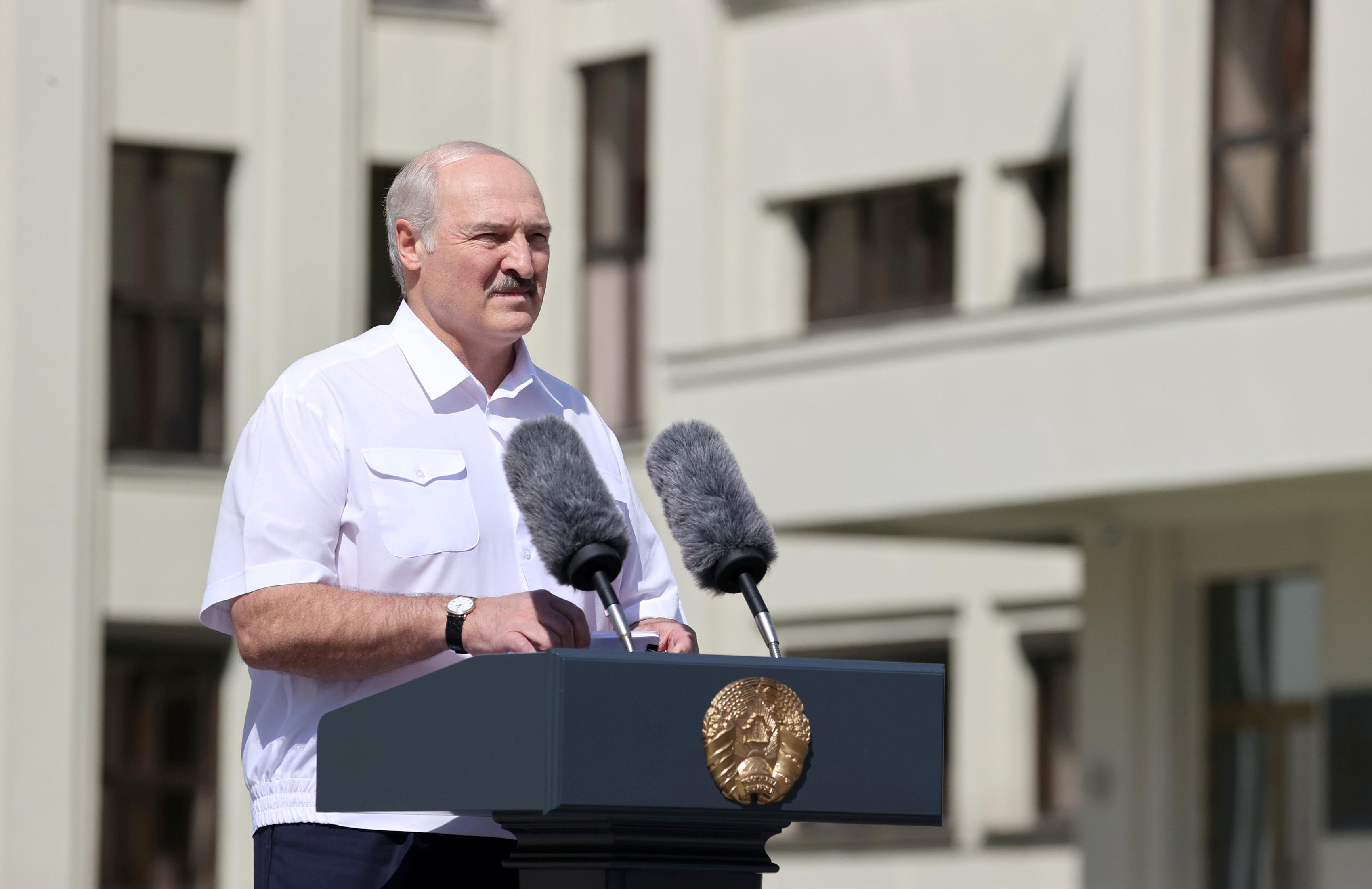 The protest in the Belarusian capital, Minsk, attracted around 200,000 people, a Reuters reporter estimated. At least two protesters have died and thousands have been detained in demonstrations since last Sunday’s vote.

People carried red and white flags and chanted “Lukashenko step down” and “We won’t forget or forgive.”

Opponents of Lukashenko, in power for 26 years, say the vote was rigged to disguise the fact that he has lost public support. He denies losing, citing official results that gave him just over 80% of the vote.

The Kremlin said Russian President Vladimir Putin had told Lukashenko Moscow was ready to assist Belarus in accordance with a collective military pact if necessary and that external pressure was being applied to the country.

It did not say where from.

Shortly before the opposition protest, there was tight security as Lukashenko’s supporters gathered in central Minsk for the first time since the election to voice their support for him and watch him give a fiery speech.

Lukashenko, under pressure from the European Union for cracking down on his opponents, said NATO tanks and planes had been deployed 15 minutes from the Belarusian border. NATO said it was closely monitoring the situation in Belarus, but that there was no military build-up at the country’s western border.

Lukashenko, who has alleged a foreign-backed plot to topple him, said Belarus was under pressure.

“NATO troops are at our gates. Lithuania, Latvia, Poland and our native Ukraine are ordering us to hold new elections,” he said, adding that Belarus would “die as a state” if new polls were held.

“I have never betrayed you and will never do so,” he said.

The Belarusian army would hold drills from Aug.17-20 in the west of the country, Russia’s RIA news agency reported.

Sviatlana Tsikhanouskaya, Lukashenko’s opposition rival in the contested election, had called for a huge “March of Freedom” through Minsk and in other towns and cities on Sunday.

A Reuters reporter said the Minsk segment was huge, with around 200,000 people present, and that a carnival atmosphere prevailed.

Alexei, a 31-year-old worker, said the protesters’ actions might not stay so peaceful if they did not get what they wanted.

“We all want Lukashenko to step down,” he said. “For now we are asking, but we will get sick of asking.”

Maria Kolesnikova, an opposition politician who has allied with Tsikhanouskaya, referred to Lukashenko as “the former president, said he should quit, and appealed to state officials to abandon him.

“This is your final chance to overcome your fear,” she said. “We were all scared too. Join us and we will support you.”

Thousands of people took part in anti-Lukashenko protests in other towns and cities.

State employees, including some police officers and state TV staff, have come out in support of the protests and some of the country’s biggest state-run plants, the backbone of Lukashenko’s Soviet-style economic model, have been hit by protests and walkouts.

Around 5,000 people attended the pro-Lukashenko protest, a Reuters reporter estimated. The Belarusian Interior Ministry put the number at 65,000. Opposition media channels said Lukashenko, a onetime manager of a Soviet-era collective farm, had bussed people in and that they were coerced into attending.

Reuters could not independently confirm that.

“The motherland is in danger!” one speaker told the crowd, who chanted: “We are united, indivisible!”

Some of those present held Belarusian national flags and chanted “For Belarus!” as patriotic music sounded from speakers.

“I’m for Lukashenko,” said Alla Georgievna, 68. “I don’t understand why everyone has risen up against him. We get our pensions and salaries on time thanks to him.”

Opposition presidential candidate Tsikhanouskaya, who fled to neighbouring Lithuania on Tuesday, wants an election recount and is forming a national council to facilitate a power transfer. 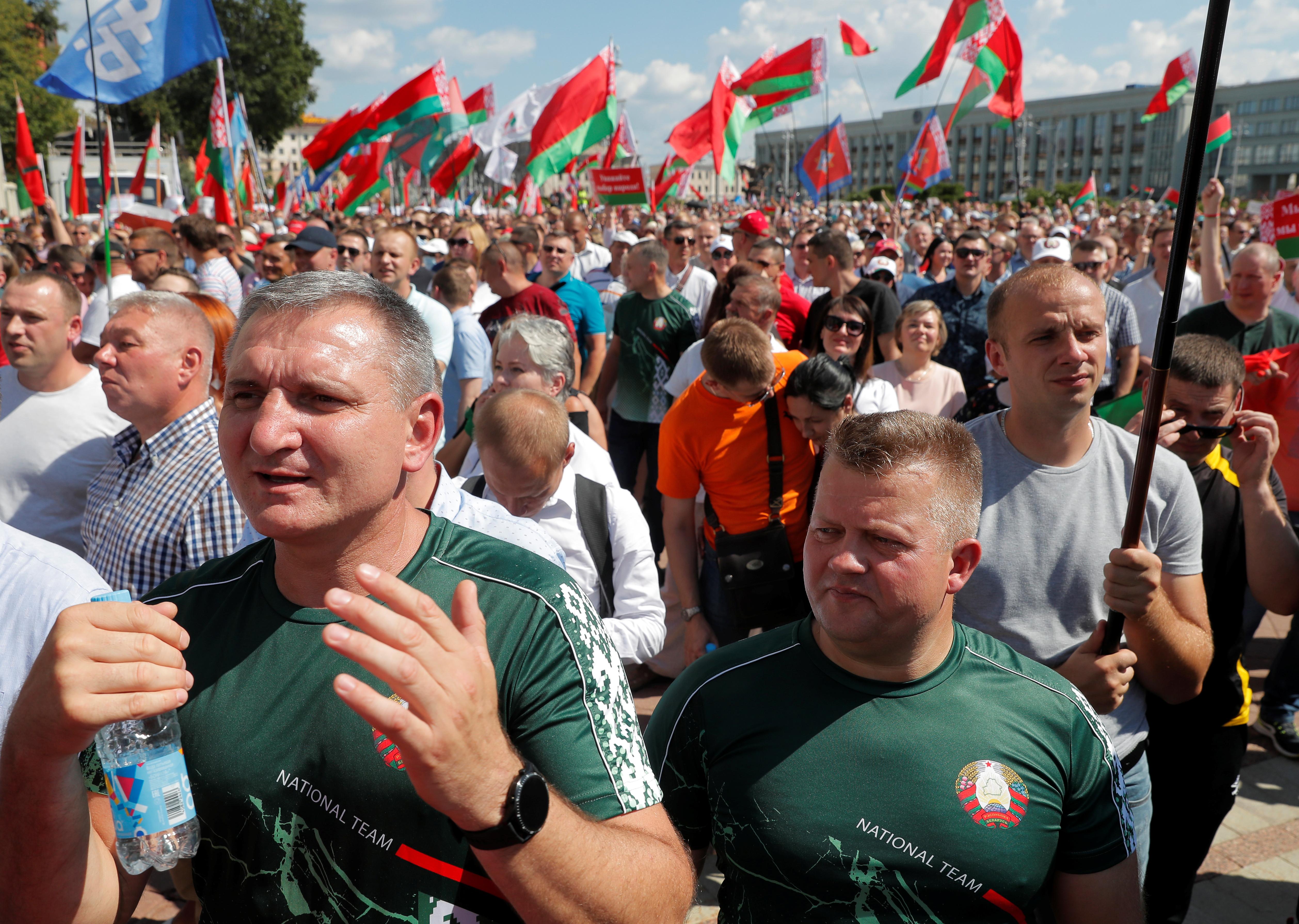 Russia, which has had a troubled relationship with Lukashenko, is watching closely as Belarus hosts pipelines that carry Russian energy exports to the West and is also viewed by Moscow as a buffer zone against NATO.

The EU is gearing up to impose new sanctions on Belarus in response to the violent crackdown.

Lukashenko and Putin have spoken twice this weekend.

The TVLine-Up: What's New, Returning and Leaving the Week of Oct. 25

Husband ‘murdered wife and sent text from her phone claiming she had coronavirus’, cops say – The Sun