Home » Russia stages drills with 10,000 troops and 40 warships in Crimea

Russia is staging huge military drills involving 10,000 troops and 40 warships in Crimea after Vladimir Putin warned the West not to ‘dare cross any red lines’ amid soaring tensions with Ukraine.

While Kiev and Nato have raised alarm over the very real Russian force of more than 100,000 soldiers at the Ukrainian border, an inflatable army this week appeared outside Moscow.

The helium-filled tanks, fighter jets, missile systems and transport trucks were proudly displayed by the defence ministry ahead of military exercises where the decoys will be deployed to fool enemy drones and satellites.

The tactic was famously used by Winston Churchill who created a fictitious base teeming with tanks in the southeast of England before D-Day to dupe the Nazis into thinking that the Allies were planning a second invasion to follow the Normandy landings.

The Kremlin has recruited Rusbal, a toy company founded by a hot air balloon enthusiast, to assemble the decoys. The firm states that the cost of fooling the enemy is a fraction the price of buying the legitimate hardware.

‘Tanks, aviation and air defence systems were moved to Moscow region so that “an enemy” had a chance not only to find a hidden aerodrome, but to obtain satellite pictures, too,’ said a report from the defence ministry’s own TV channel, Zvezda. 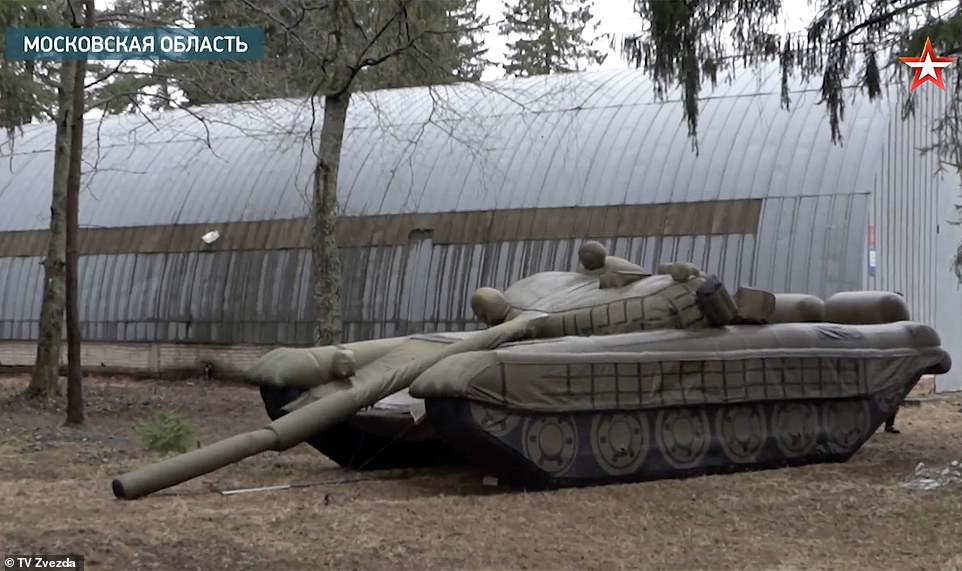 The helium-filled tanks, fighter jets, missile systems and transport trucks are intended to fool enemy drones or satellites carrying out reconnaissance (pictured: a tank in the process of being blown up) 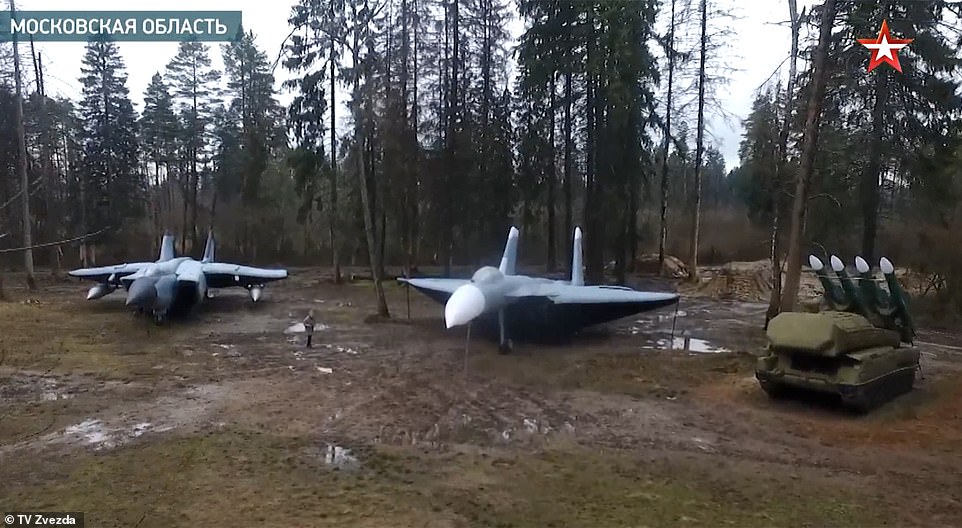 The blow up models are made to appear like full-sized versions of MiG fighter jets and Russian military systems. The Kremlin has recruited Rusbal, a toy company founded by a hot air balloon enthusiast, to assemble his decoys. The firm states proudly that the cost of fooling the enemy is a fraction the price of being the legitimate hardware. 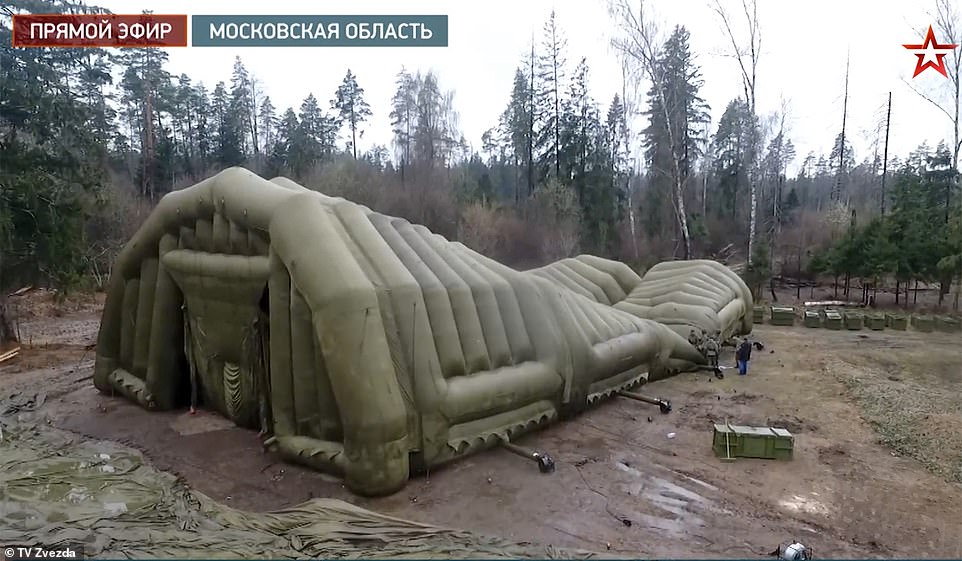 They have even gone as far as to design barracks-style structures to make it appear as if a large number of infantry are accommodated at the decoy base. The tactic was famously deployed by Winston Churchill who created a fictitious base teeming with tanks in the southeast of England before D-Day to dupe the Nazis into thinking that the Allies were planning a second invasion to follow the Normandy landings. 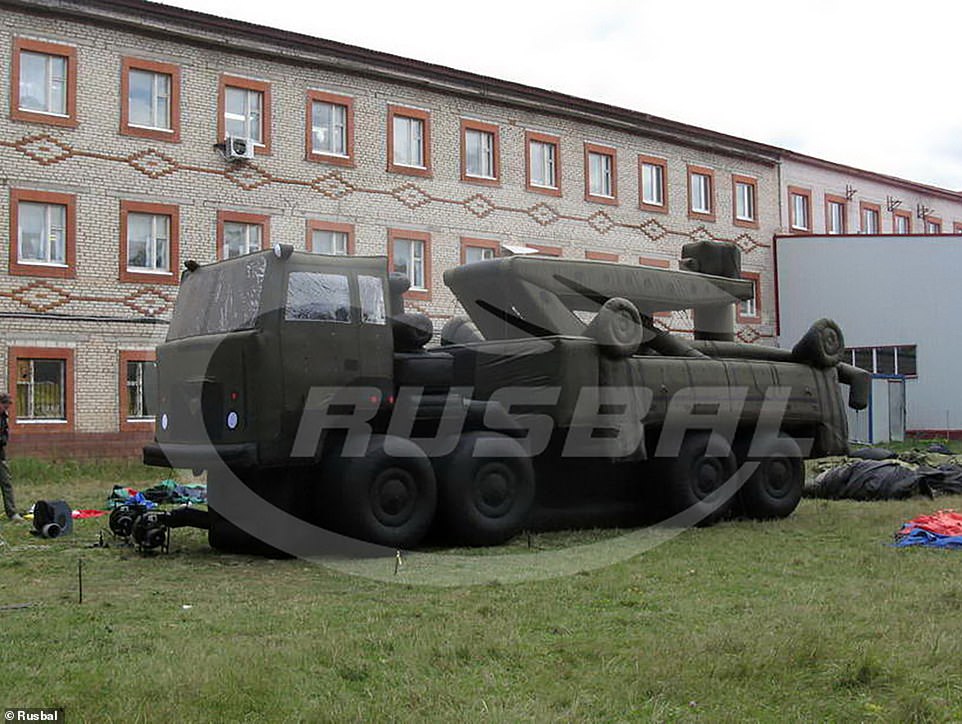 A decoy missiles-launching truck after it has been blown up, from the air they appear to be genuine 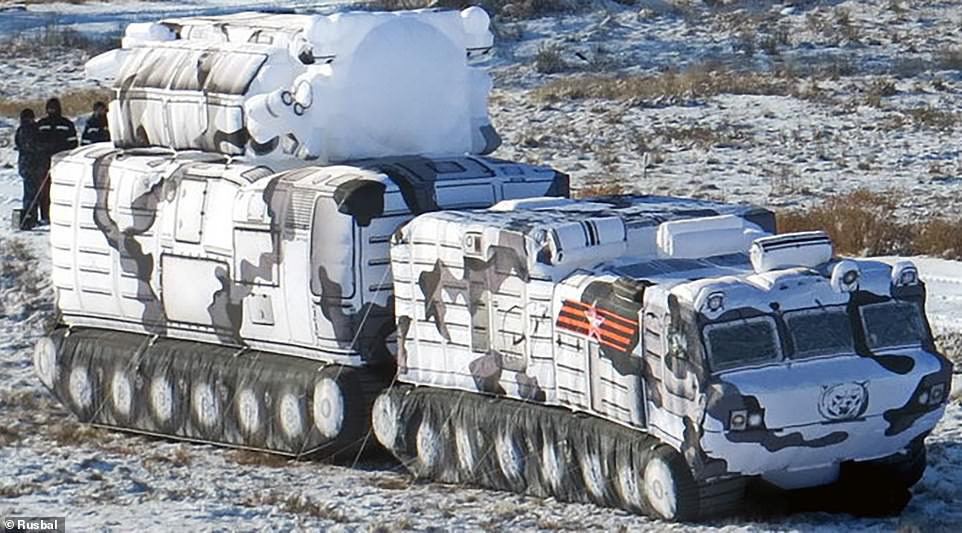 A snow-camouflaged truck was shown off the report which featured on the defence ministry’s own outlet. ‘Tanks, aviation and air defence systems were moved to Moscow region so that ‘an enemy’ had a chance not only to find a hidden aerodrome, but to obtain satellite pictures, too,’ said the broadcast 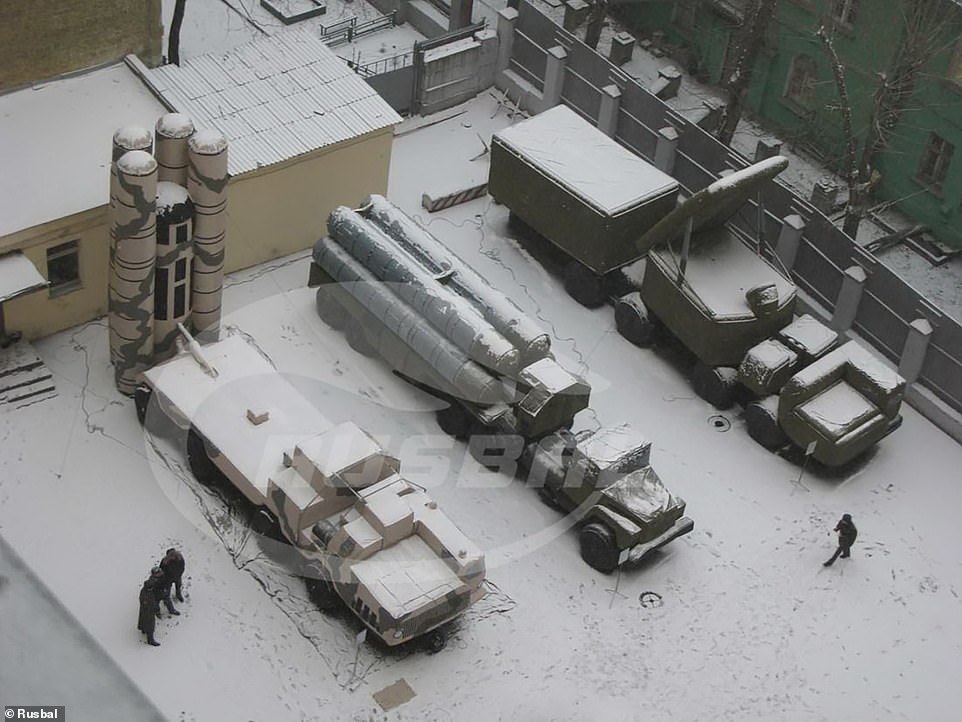 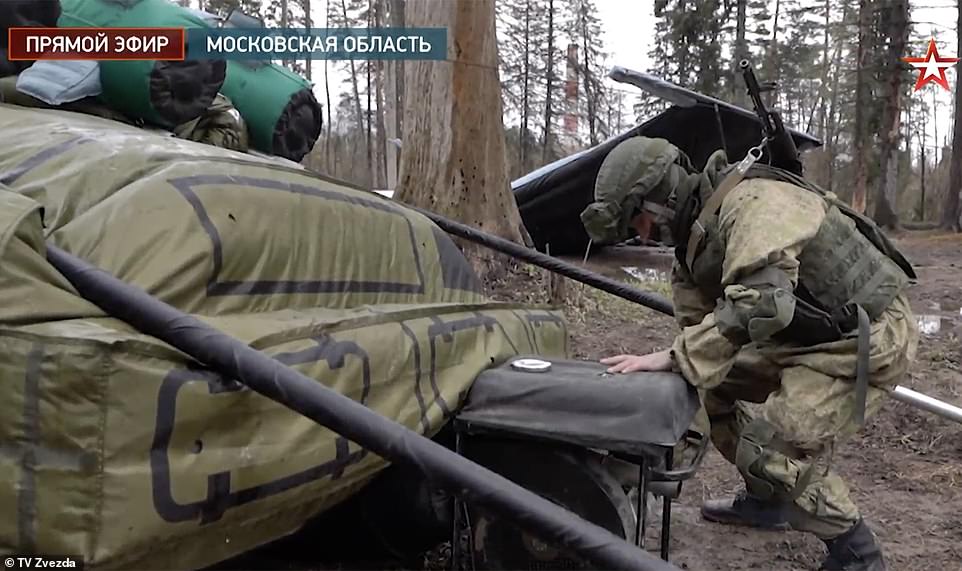 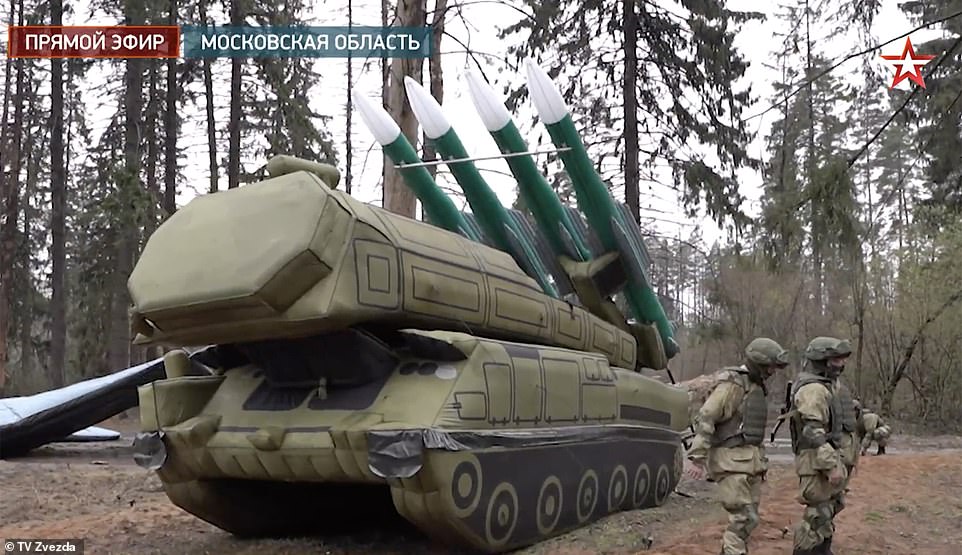 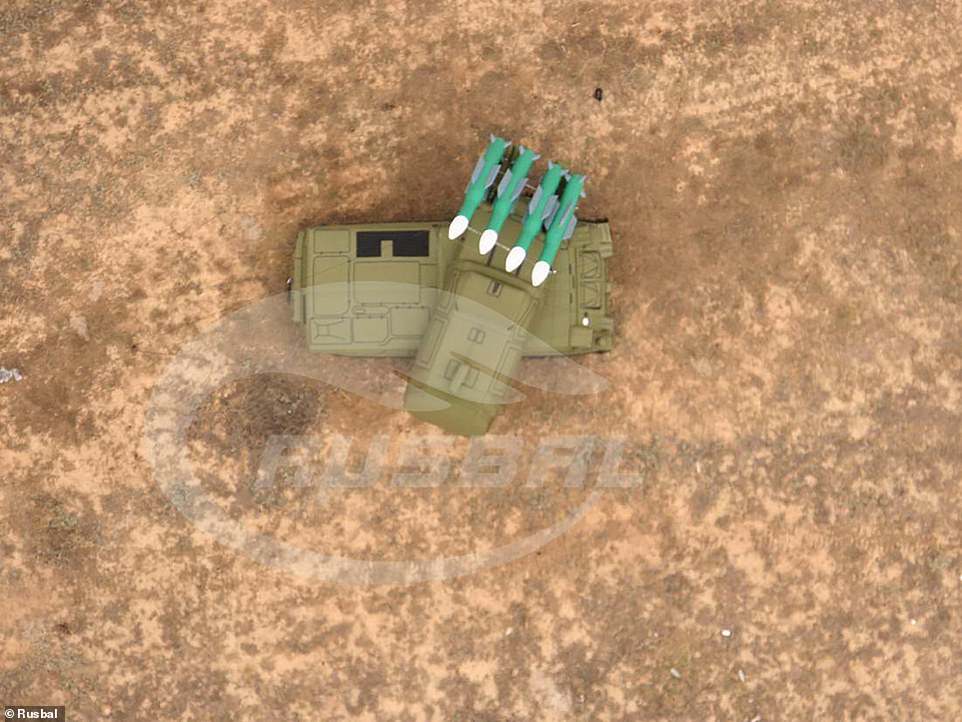 One of the missile systems seen from above, still visible a decoy, but at hundreds of feet the difference between the real thing is supposed to be imperceptible 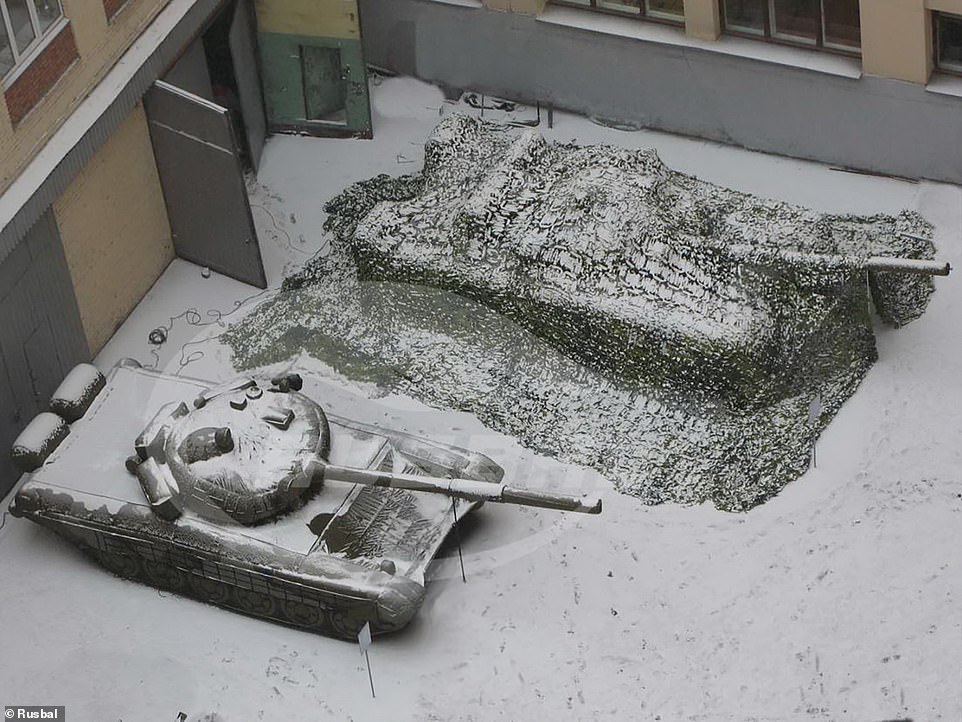 Two inflatable tanks are seen covered in snow, making it even more difficult to tell the decoys from the real thing 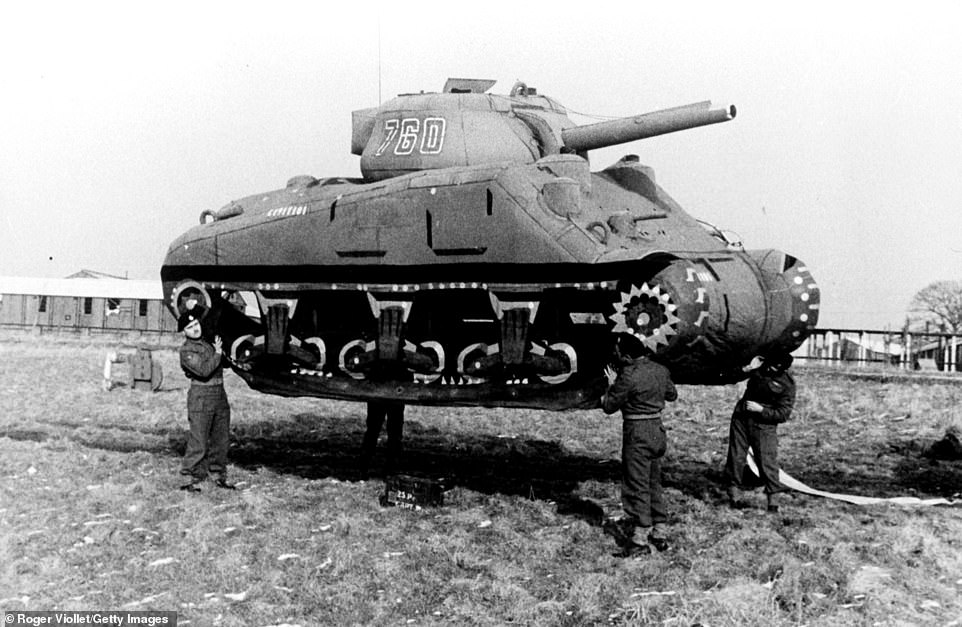 An inflatable tank is held aloft in southeast England in 1939. Churchill came up with the plan to create the fictitious First US Army Group (FUSAG), to dupe the Nazis into thinking that the Allies were planning a colossal invasion around Calais, when, in fact, all of its forces were being thrown at Normandy on D-Day

It shows the 45th engineer-camouflage regiment ‘armed with the most unusual equipment of the Russian army’.

Among the armoury is what looks like a MiG-31 and Su-27 fighters under the cover of an anti-aircraft missile system at a mock covert airfield in the forest.

The army says: ‘The inflatable equipment is nearly identical to the original thanks to the use of special materials.

‘It also has the same radiation background so that an enemy does not notice the deception. The decoys can be created within minutes.’

It comes as Putin gave a very real warning to the West on Wednesday, saying Moscow’s response to any encroachment on its territory will be ‘quick and tough.’

Putin lashed out at Nato and the U.S. during his annual state-of-the-nation address following weeks of ratcheting tension on the Ukrainian border where thousands of troops and tanks have been stationed.

Washington and its allies have urged the Kremlin to pull the troops back, but Putin has pressed ahead, even dispatching 20 warships and 50 fighter jets to carry out live fire drills in the Black sea this week.

‘I hope that no one dares to cross the red line in respect to Russia, and we will determine where it is in each specific case,’ Putin said.

‘Those who organize any provocations threatening our core security interests will regret their deeds more than they regretted anything for a long time.’

Moscow has rejected Ukrainian and Western concerns about the troop buildup, saying it doesn’t threaten anyone and that Russia is free to deploy its forces on its territory.

But the Kremlin also has warned Ukraine against trying to use force to retake control of the rebel-held east, saying Russia could be forced to intervene to protect civilians in the region.

‘We really don’t want to burn the bridges,’ Putin said. ‘But if some mistake our good intentions for indifference or weakness and intend to burn or even blow up those bridges themselves, Russia’s response will be asymmetrical, quick and tough.’

As Putin spoke, a wave of protests started rolling across Russia in support of imprisoned opposition leader Alexei Navalny, and a human rights group said nearly 1,500 people were arrested.

Thousands marched in central Moscow, where police blocked off a square next to the Kremlin. Police in St. Petersburg blocked off Palace Square, outside the Hermitage museum, and protesters instead massed along Nevsky Prospekt.

The politician, who is Putin’s most persistent critic and was poisoned with a chemical nerve agent last year, started a hunger strike three weeks ago to protest what he said was inadequate medical treatment and officials’ refusal to allow his doctor to visit him. His supporters called the rallies as his health reportedly is in severe decline. 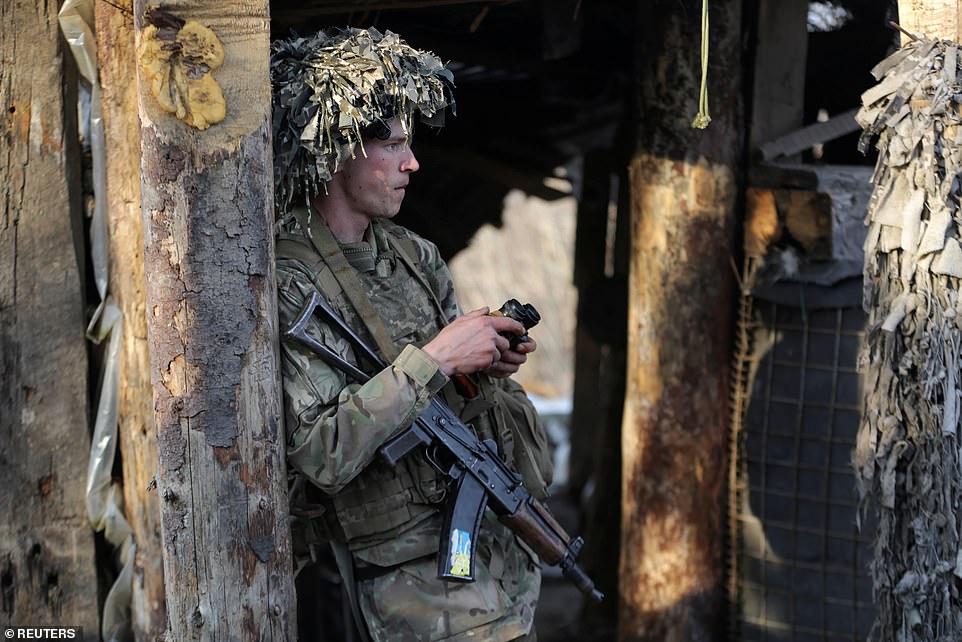 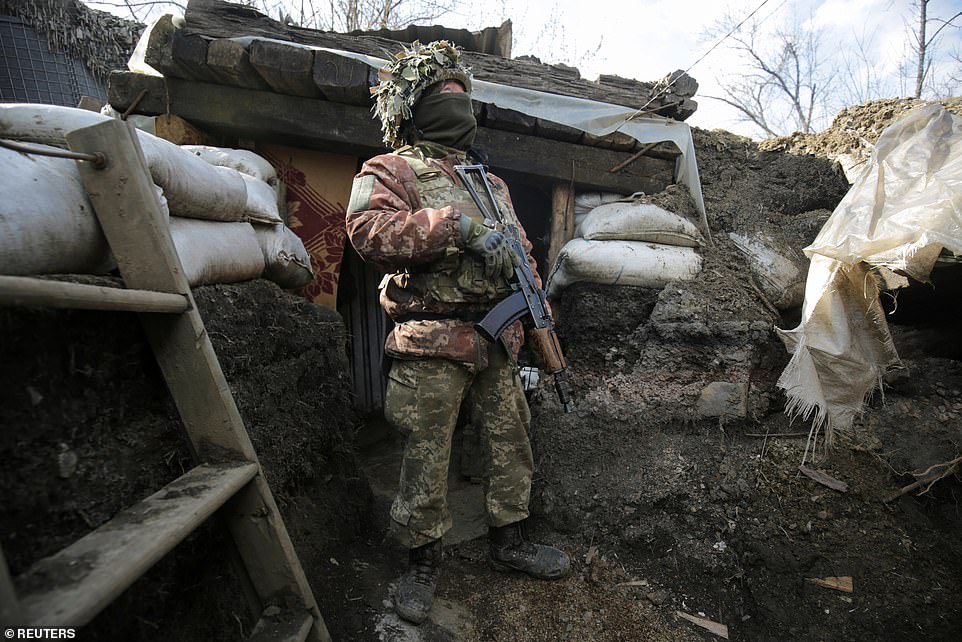 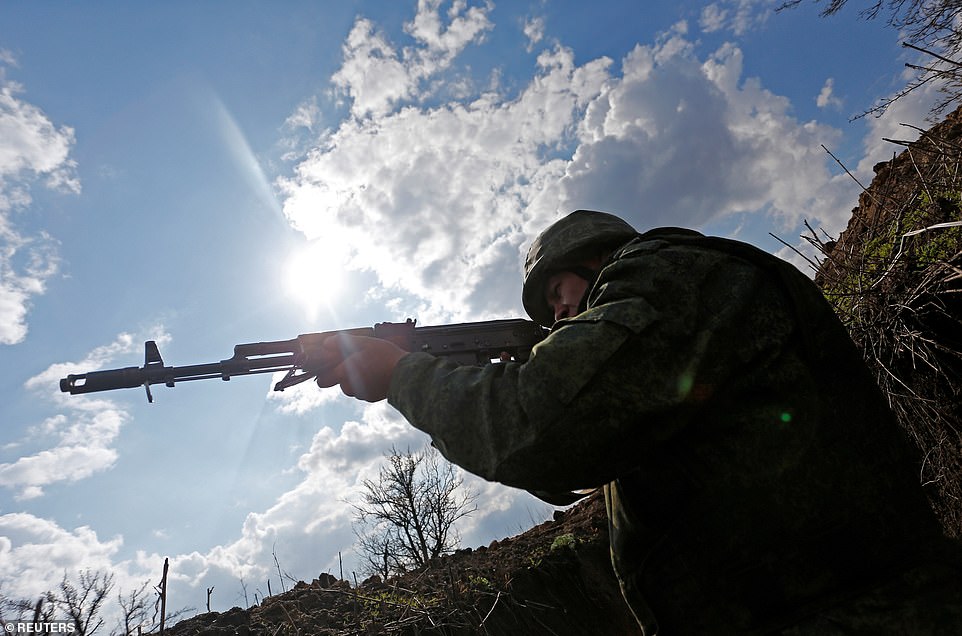 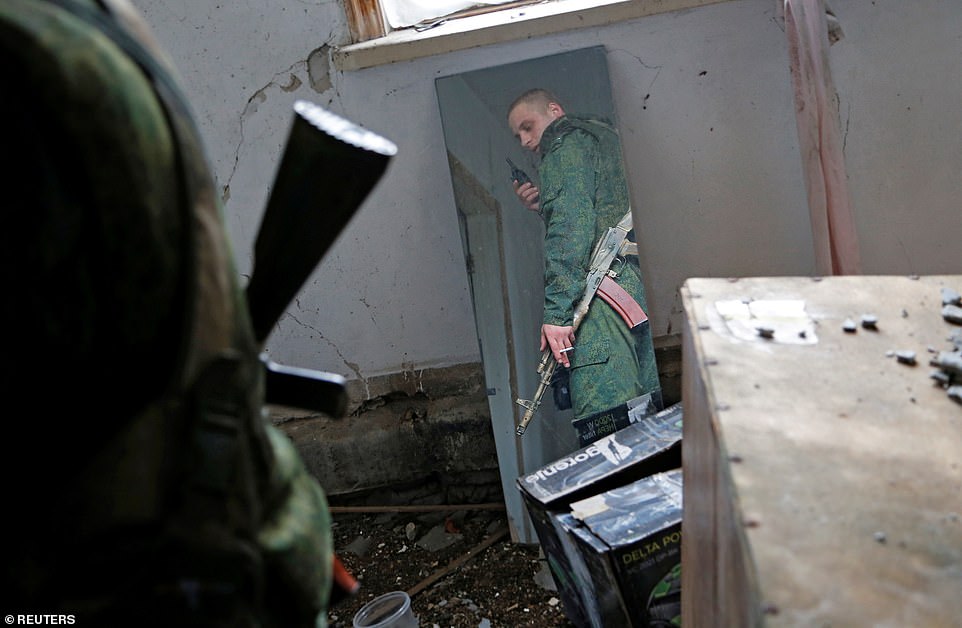 A militant of the pro-Russian Luhansk People’s Republic (LNR) is reflected in a mirror at fighting positions on the line of separation from the Ukrainian armed forces in Luhansk Region, Ukraine April 21 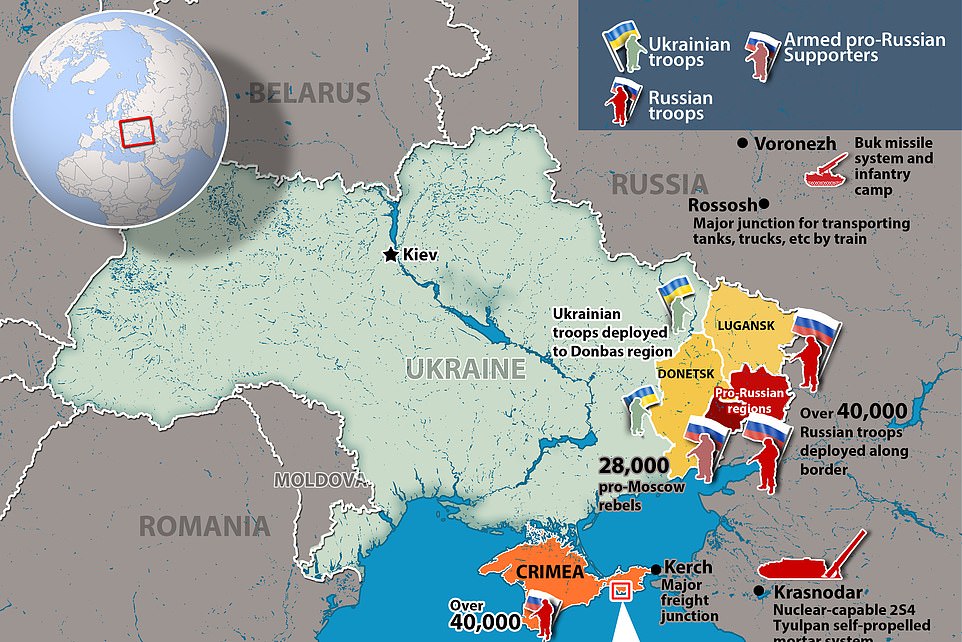 Nato says that Putin has more than 100,000 troops now massed on the Ukrainian border, in addition to 20 warships in the Black Sea which threaten to cut off vital Ukrainian ports

In his speech, Putin pointed to Russia’s moves to modernize its nuclear arsenal and said the military would continue to build more state-of-the-art hypersonic missiles and other new weapons.

He added that the development of the nuclear-armed Poseidon underwater drone and the Burevestnik nuclear-powered cruise missile is continuing successfully.

In an apparent reference to the U.S. and its allies, the Russian leader denounced those who impose ‘unlawful, politically motivated economic sanctions and crude attempts to enforce its will on others.’

He said Russia has shown restraint and often refrained from responding to ‘openly boorish’ actions by others.

The Biden administration last week imposed new sanctions on Russia for interfering in the 2020 U.S. presidential election and for involvement in the SolarWind hack of federal agencies – activities Moscow has denied.

‘Russia has its own interests, which we will defend in line with the international law,’ Putin said during Wednesday’s address.

‘If somebody refuses to understand this obvious thing, is reluctant to conduct a dialogue and chooses a selfish and arrogant tone, Russia will always find a way to defend its position.’

In an emotional outburst, Putin chastised the West for acquiring a defiant stance toward Russia.

‘Some countries have developed a nasty habit of bullying Russia for any reason or without any reason at all. It has become a new sport,’ he said.

In an apparent reference to the U.S. allies, he compared them to Tabaqui, a cowardly golden jackal kowtowing to Shere Khan, the tiger in Rudyard Kipling’s ‘Jungle Book.’

‘They howl to please their lord,’ he said.

Russia this week engaged in a tense tug-of-war with the Czech Republic, following Prague’s move to expel 18 Russian diplomats over a massive Czech ammunition depot explosion in 2014.

Moscow has dismissed the Czech accusations of its involvement in the blast as absurd and retaliated by expelling 20 Czech diplomats. 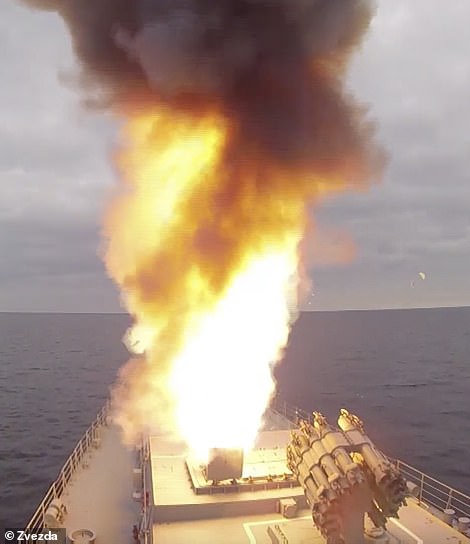 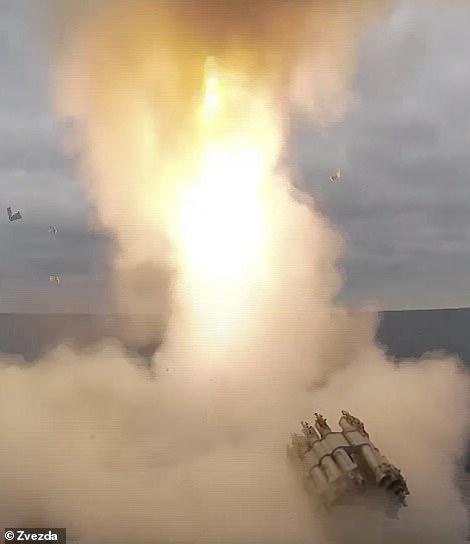 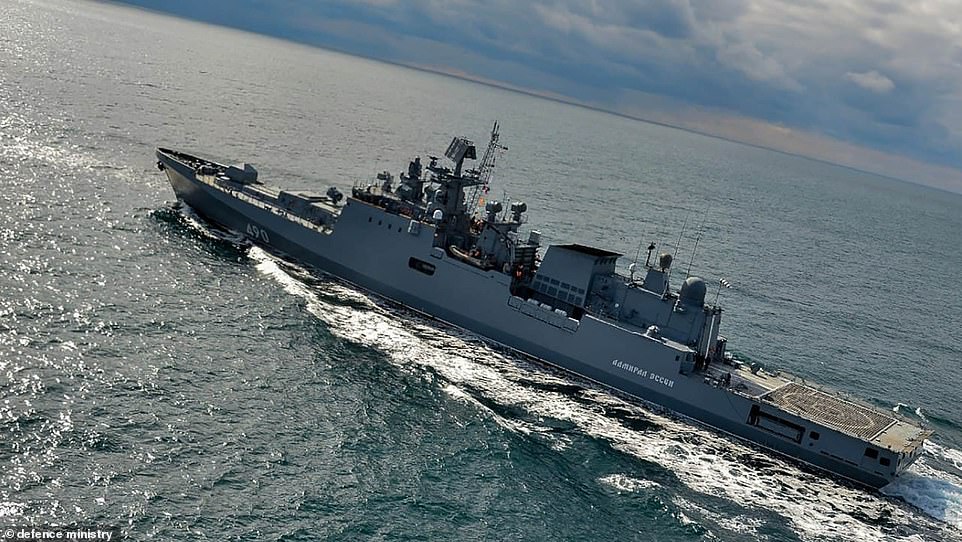 Putin also harshly criticised the West for failing to condemn what he described as a botched coup attempt and a failed plot to assassinate Belarus’ President Alexander Lukashenko, allegedly involving a blockade of the country’s capital, power cuts and cyberattacks.

‘The practice of organizing coups and planning political assassinations of top officials goes over the top and crosses all boundaries,’ Putin said, drawing parallels to plots against Venezuelan President Nicolas Maduro and the popular protests that led to the ouster of Ukraine’s former Russia-friendly president, Viktor Yanukovych, in 2014.

Russia responded to Yanukovych’s ouster by annexing Ukraine’s Crimean Peninsula and throwing its support to the separatists in the country’s east. Since then, fighting there has killed more than 14,000 people and devastated the industrial heartland.

Putin dedicated most of his annual address to domestic issues, hailing the nation’s response to the coronavirus pandemic.

He said the quick development of three coronavirus vaccines underlined Russia’s technological and industrial potential. He called for a quicker pace of immunizations, voicing hope the country could achieve collective immunity this fall.

He put forward incentives to help the economy recover from the pandemic and promised new social payments focusing on families with children.

Nurse, 61, is crushed to death by backhoe in Brooklyn intersection

Isle Of Wight Festival Scrapped Due To Coronavirus