Here kitty, kitty! Russian zoo is mocked for making a keeper dress as a tiger as they practice their drills for a big cat escape after a staff member was mauled

This is the bizarre moment a zoo keeper dressed up as a tiger for a practice drill.

Staff at the zoo in Kaliningrad in Russia were practicing safety procedures after a keeper was mauled by a Siberian tiger last year.

They took around half an hour to grab the man dressed as an escaped tiger.

The strange exercise was held after zoo staff reacted slowly when keeper Nadezhda Srivastava, 44, was pinned down by a tiger for ten minutes last year.

She was eventually rescued by visitors who distracted the tiger by throwing heavy objects into its enclosure.

The predator attacked Ms Srivastava after the keeper went to feed it and accidentally left a gate unbolted. 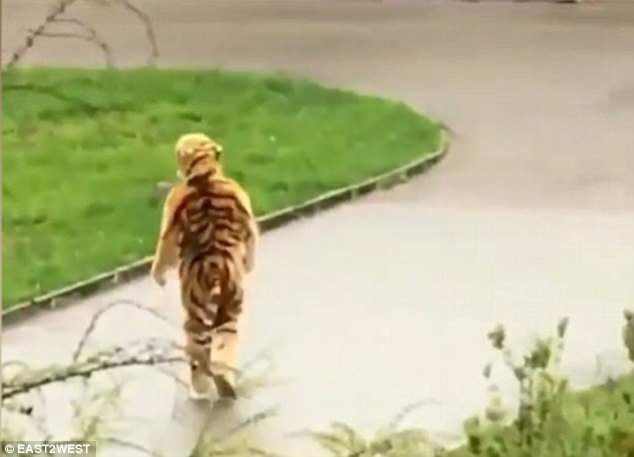 That attack took just ten minutes to injure the zoo keeper, who has still not returned to work.

In comparison, keepers took 30 minutes to capture the man dressed as a tiger.

Unsurprisingly, reaction online has been less than complimentary of the drill.

One person pointed out that a real tiger could’ve caused serious damage in 30 minutes, while another pointed out locating an escaped cat would be easier if ‘screaming visitors’ were present.

A spokesman told The Sun: ‘The entire process of detection, immobilisation, and return of the animal to the enclosure took 30 minutes. 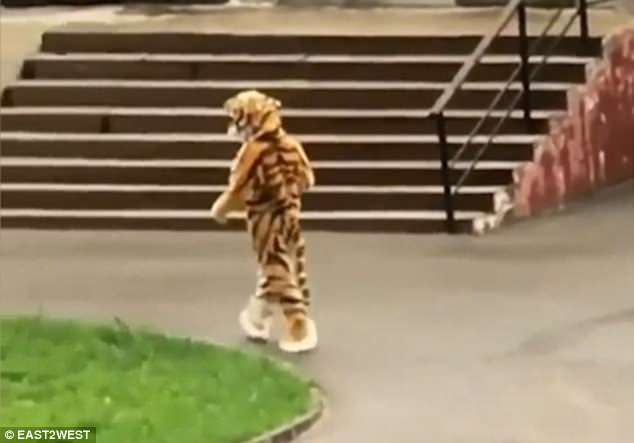 The bizarre drill, which saw staff take 30 minutes to get the fake tiger, comes after a keeper was mauled last year

Reliving the horrific attack, Ms Srivastava explained how she protected her throat from the animal by putting her hands and elbows in its jaw.

She also revealed that a man called Oleg was fundamental in her rescue.

She explained how Oleg rushed over to her after hearing her screams and threw a rubbish bin into the tiger enclosure, scaring the animal.

She said: ‘I remember Oleg screaming, guiding me, where to go. Without him, I might not be here still.’

She has called on the visitors who rescued her to be honoured.

Here's How Kylie Jenner Really Got That Scar On Her Leg