Sadiq Khan today again blamed commuters for packed Tube trains during the coronavirus crisis as he was shown footage of the cramped conditions on live TV.

The Mayor of London claims ‘too many people are not staying at home’ and again insisted they could not run any more services as he admitted only around half of all trains are now going during rush hour.

Today there are waits of up to 20 minutes between trains when usually it would be three to five minutes, leading to more busy carriages and platforms packed with key workers with no choice but to go to work.

Mr Khan told Good Morning Britain today: ‘Transport for London staff are working their socks off. 30 per cent are self isolating or have symptoms. We are providing max services we can – of the 13 lines on TFL – all but two are working’.

He added: ‘There is a concern that still too many people who really, really should not be going to work are using public transport during the rush hour and the key message is unless you really have to get to work, work from home, and if you do have to go into work, please avoid the rush hour.’ 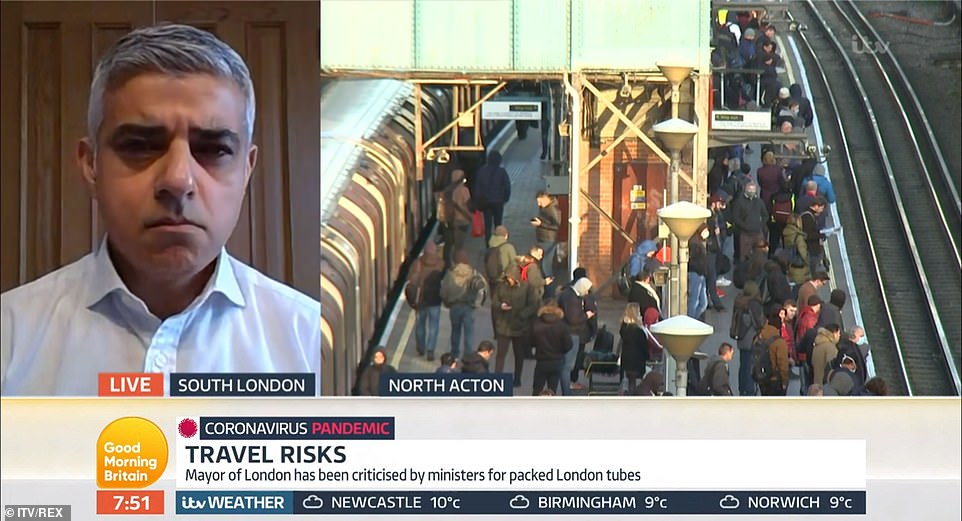 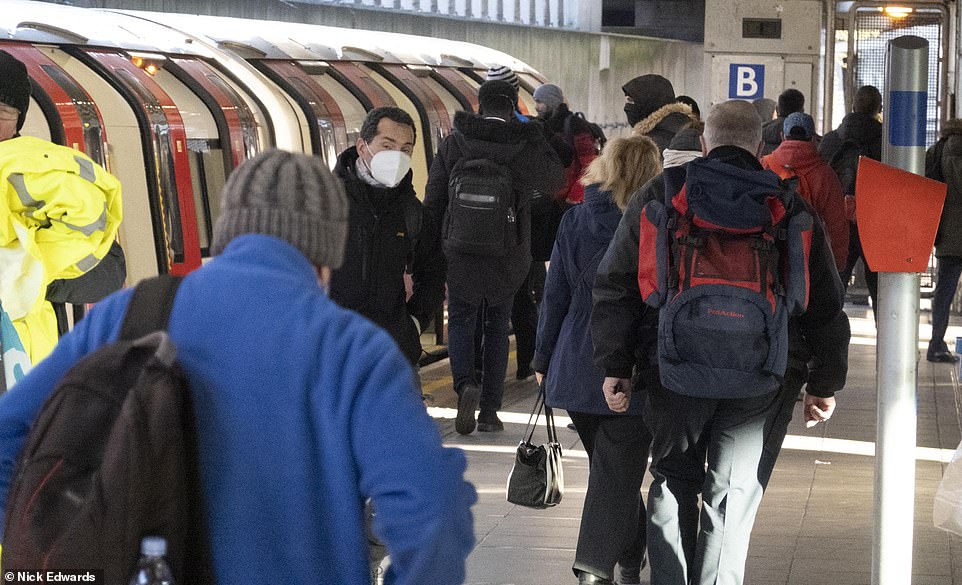 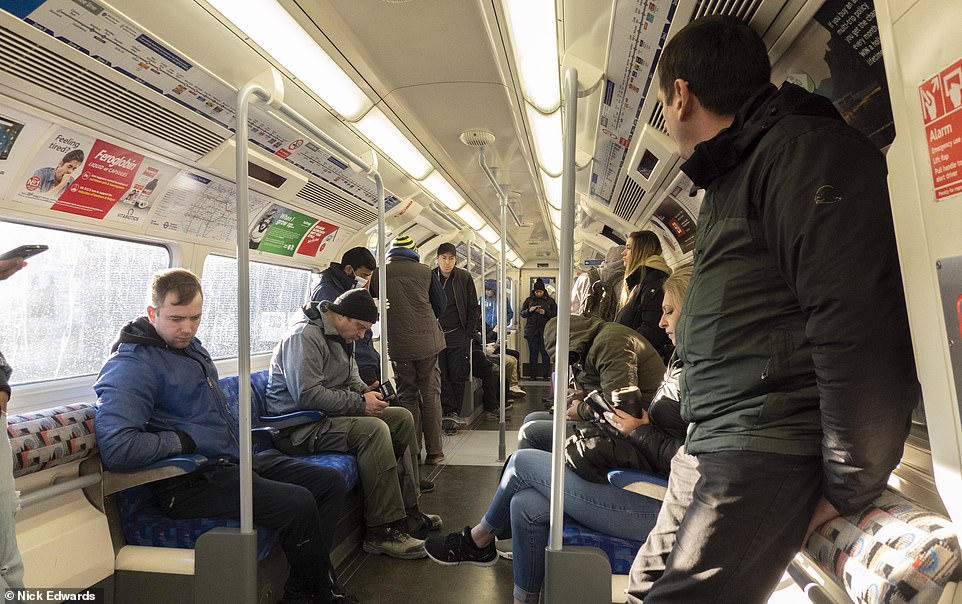 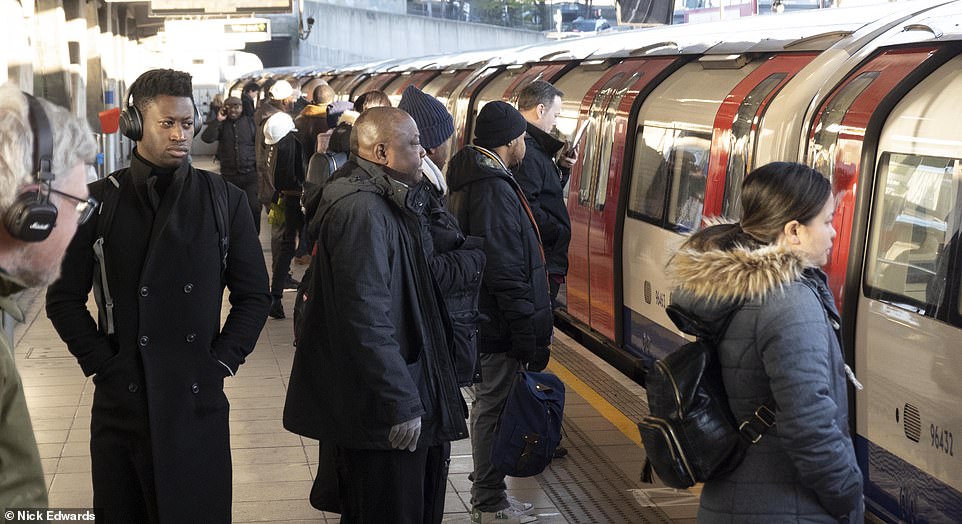 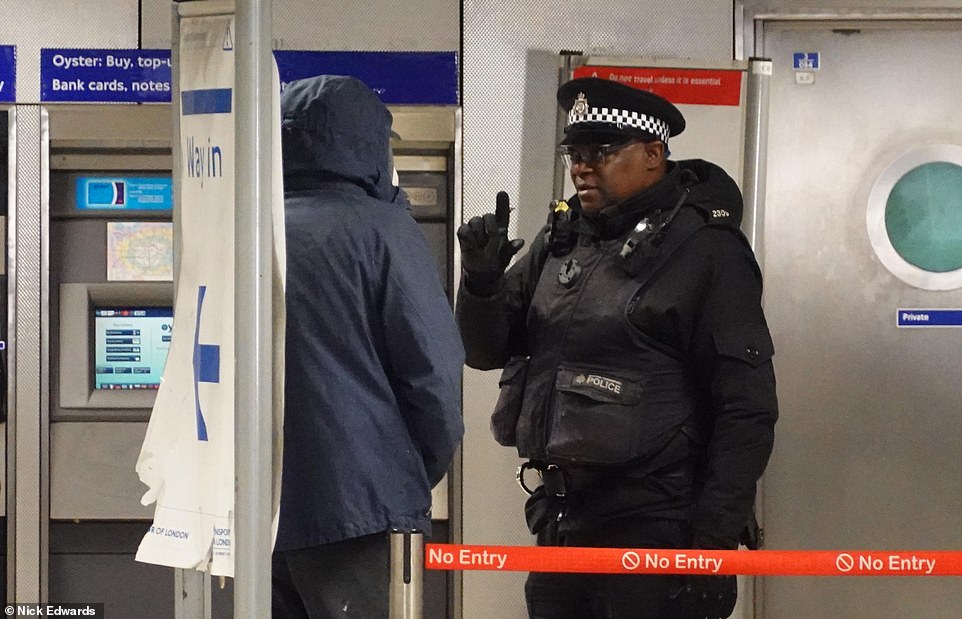 Earlier he told BBC Radio 4’s Today programme: ‘We have in London roughly speaking 90% of our buses still running to take critical workers to work – that’s more than 8,000 buses, more than 600 routes.’

Mr Khan also said 55% of trains on lines run by Transport for London (TfL) are running during rush hour. 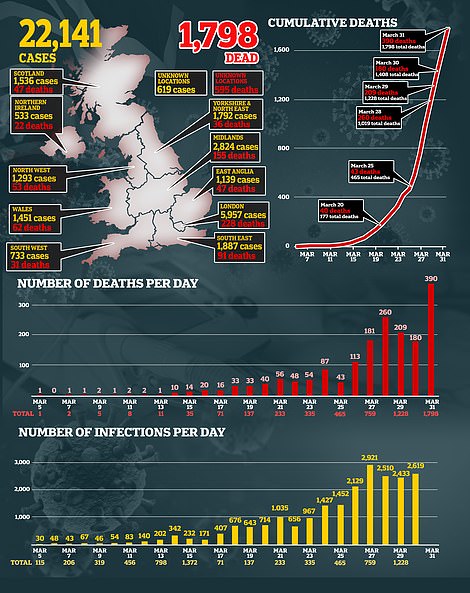 He added a ‘large number’ of TfL staff are ‘self-isolating or are sick with Covid-19’.

Passengers complained about the lack of space as they travelled to work, leading to them being unable to follow Government guidance to keep two metres away from others.

Transport for London (TfL) has called for its services to only be used for ‘essential journeys by vital workers in the NHS and other critical services’.

It said passenger numbers on Monday morning were down 94% compared with the same day last year.

Demand on the previous Monday was down 85% year-on-year.

But a Central line passenger, who did not want to be named, said there were ‘plenty of commuters’ on the platform at Leytonstone station, east London on Monday morning.

She told the PA news agency: ‘People observed social distancing whilst on the platform but as soon as the train arrived everyone moved towards the doors.

‘Perhaps there should be an announcement that commuters should take their time in getting on and off.’ 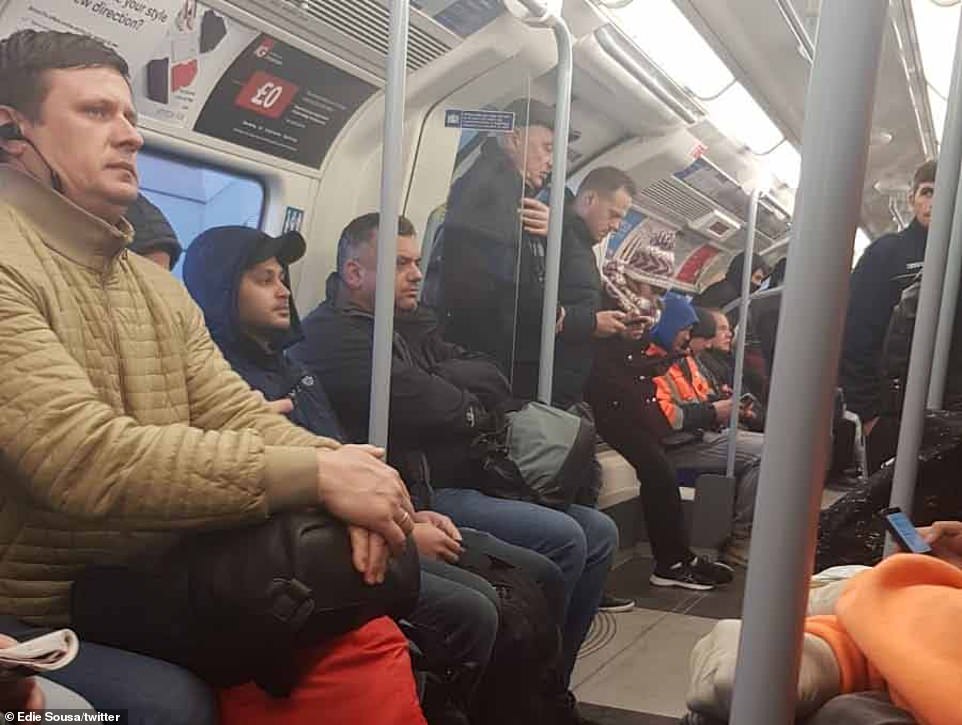 Another woman who did not want to be named said she is concerned about her partner catching coronavirus on the Tube, particularly as they are both NHS nurses.

She commented: ‘My partner is an NHS registered nurse going to Westminster from Newbury Park Tube.

‘It is so difficult to get a seat, even at 6am.

‘I’m worried that she will catch the virus herself and get ill but also pass it on to her colleagues or me.

‘I am also an intensive care and high dependency unit registered nurse.

‘This will take us away from critically ill patients during this very trying time.

‘We are already at reduced numbers of registered nurses in intensive care and high dependency units, even before Covid-19. Now the situation is worse.’

Train drivers’ union Aslef posted a video showing a crowded platform with passengers stood shoulder-to-shoulder waiting to board a service.

It also posted a message which read: ‘Shocking scenes again on London Underground this morning. Workers being forced to take unnecessary journeys by unscrupulous employers.

‘Government must take action to close non-essential workplaces so our members can continue to provide safe services for key workers.’

Ofcom clears Corrie over Rana's death after more than 200 complaints

Melania Trump: The Blood Trees of Doom look ‘even more beautiful’ in person

How Nicholas Hoult Feels about Working With Ex Jennifer Lawrence