Volunteers and private companies are pitching in to help with the search for missing 3-year-old Lina Sadar Khil, who vanished from a playground at her family’s apartment complex in San Antonio on Monday evening.

Kenjoh Outdoor, an advertising company with digital billboards throughout the United States, put up two billboards in San Antonio on Wednesday at no cost after sarch activists contacted them.

“Nothing like this has ever come across our desks,” Jake Levine, a salesperson at Kenjoh, told Fox News. “I’m really happy to play a small part.” 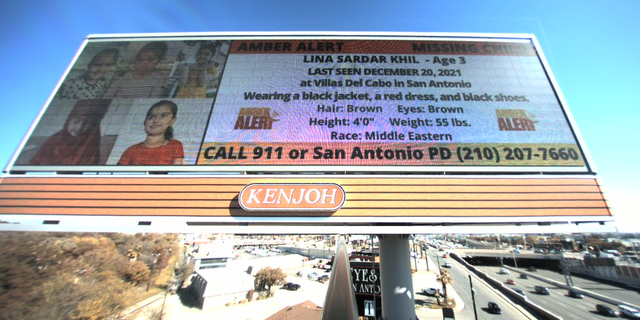 Lina’s mother was watching her on a playground at the Villas del Cabo apartment complex in northwestern San Antonio on Monday evening when the 3-year-old disappeared.

She was reported missing a couple of hours later and the Texas Department of Public Safety sent out an amber alert that evening, calling her an “abducted child.”

Lina’s father, Riaz Sardar Khil, told KENS-TV through a translator that his family settled in San Antonio two years ago after fleeing from “threats that were posed to us” in Afghanistan.

“During our entire lives we have not been as saddened as we were yesterday and today,” the father told the local news outlet.

“We have every available asset at the police department working on this case right now,” McManus told reporters on Tuesday.

The FBI and local law enforcement officers are going door-to-door and searching every room at the family’s apartment complex. Helicopters could be seen overhead on Tuesday and Wednesday.

No PM apology for sleaze row as it wouldn't be sincere, says Rees-Mogg

Dr. Drew Says Pete Davidson Must Avoid Ariana Grande Because His Life Depends on It

Kylie Jenner reveals Stormi, 2, has deadly nut allergy – the 11 signs to know in children – The Sun