Home » World News » Satellite images show the destruction of the Moria refugee camp, Europe’s largest migrant camp, after it was ravaged by a fire 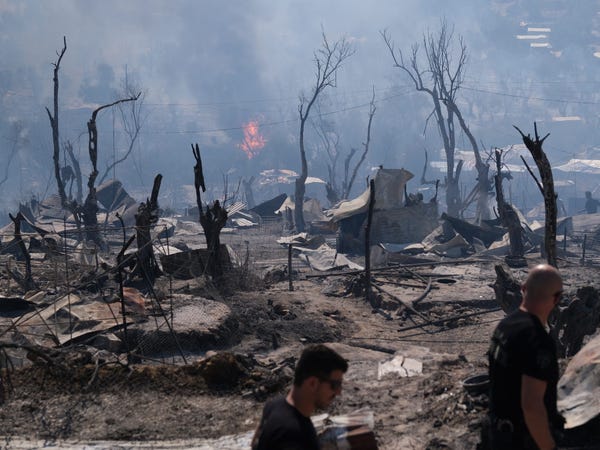 The overcrowded Moria refugee camp in Greece was set ablaze on Tuesday night displacing the more than 12,000 migrants being housed there.

Greek authorities said the fire was most likely started by camp residents who were "dissatisfied" with lockdown measures implemented to curb the spread of the coronavirus, after 35 people tested positive for COVID-19 this week, CNN reported.

Non-governmental organizations told the Guardian that the situation is dire and more tragedy is unfolding as the camp still burns.

Annie Petros, head coordinator of the charity Becky's Bathhouse, told the Guardian that police prevented her from taking injured people to the hospital while she was driving them away from the fire.

"When we saw there was a fire we drove as fast as we could with water to the camp, intending to take sick people to hospital. I can't describe properly the scene we saw. There were streams of people, thousands of them, walking away from the camp. They were totally silent, terrified and traumatized, walking through thick smoke and the awful smell of burning plastic," Petros told the outlet.

The camp which is the largest in Europe is notorious for holding six times its intended capacity of 2,200. 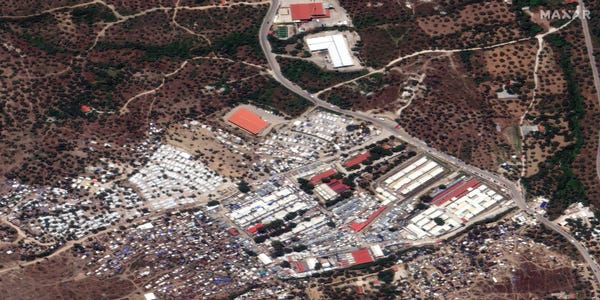 The destruction from the fire left more than 12,000 people without shelter. 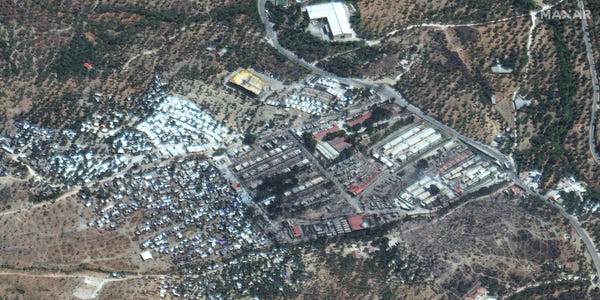 "We now have 12,000 people with no shelter, homeless on the main road. I have been called just now by the army, they want to get food to people and masks, sanitization," Omar Alshakal, a former refugee and founder of Refugees4Refugees, told the Guardian.

The camp was supposed to be sealed off until September 15. After a man tested positive for the virus, the camp would only allow "security personnel" access after a temperature check. 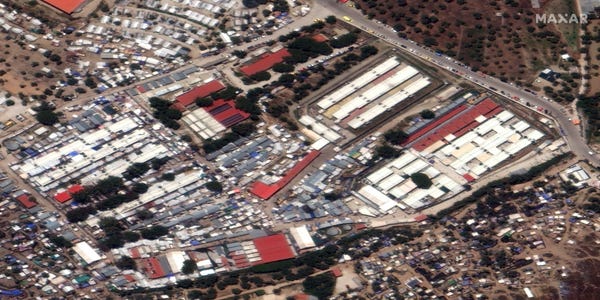 CNN reported that 35 people in the camp tested positive for COVID-19 this week.

Authorities believe the cause of the fire was likely those in the camp who were upset by the lockdown measures.

There have been no reported injuries from the fire yet, but Greek Prime Minister Kyriakos Mitsotakis declared a state of emergency. 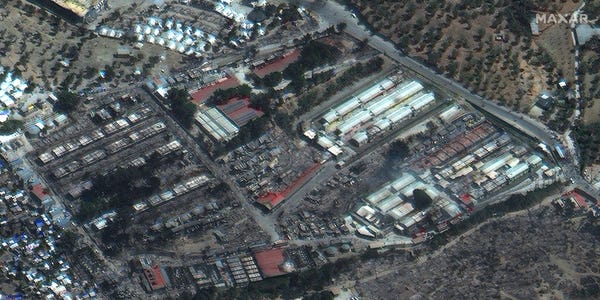 "I recognize the difficult conditions. However, nothing can become an alibi for violent reactions to health checks. And, much more, for riots of this magnitude," Mitsotakis said, according to CNN. "The situation in Moria cannot continue because it is a matter of public health, humanity, and national security at the same time."

There were more than 20,000 people in the camp at the start of the pandemic, but thousands were transferred off the island. 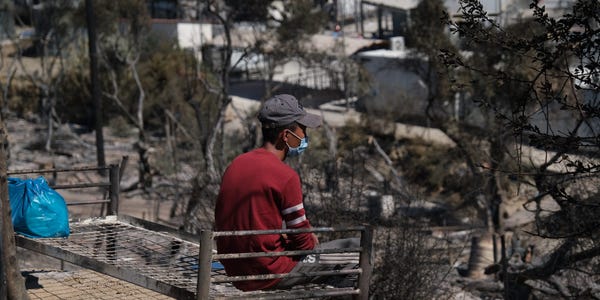 "There are still too many people there," Ylva Johansson, the European commissioner for migration told The New York Times this week.

She called the conditions in camp "unacceptable."

The camp is almost entirely destroyed. 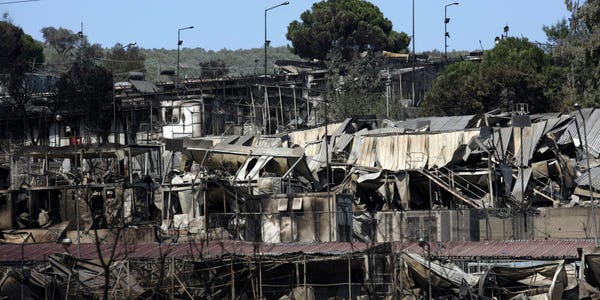 The New York Times reported that surrounding areas were also impacted and only a medical facility and a small number of tents were spared on Tuesday.

Many families including those with children slept in the open without any bedding or cover. 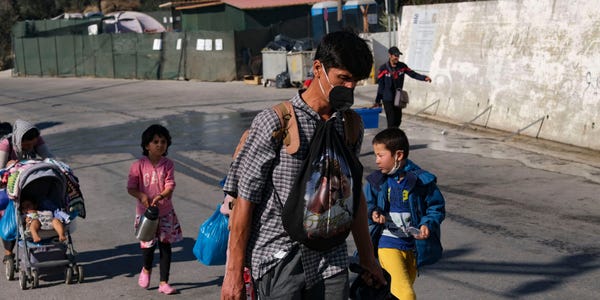 Some had to walk miles to the other villages to get access to basic supplies like food and water, Al Jazeera reported.

"Our home burned, my shoes burned, we don't have food, no water," Valencia, an eight-year-old Congolese girl said.

Al Jazeera said Valencia was walking barefoot when she approach a Reuters reporter and asked for a biscuit because she was hungry.

Another smaller fire hit the camp on Wednesday, destroying most of what was spared the night before. 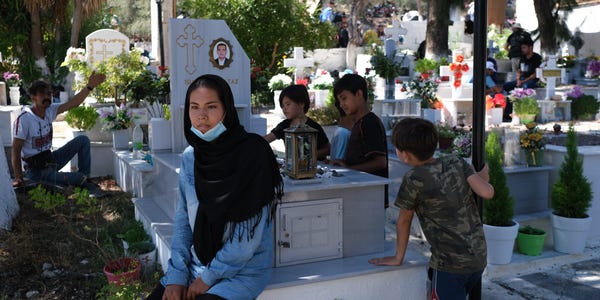 Around 400 children were flown to mainland Greece. 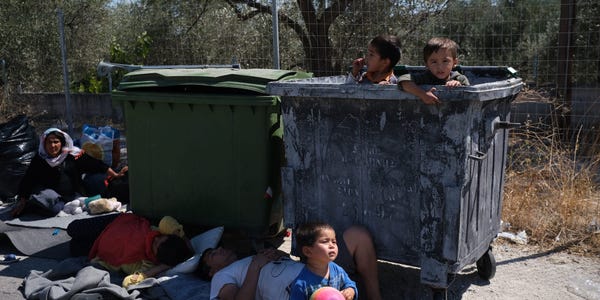 Around 2,000 people would be temporarily sheltered on ships, Migration Minister Notis Mitarachi said. 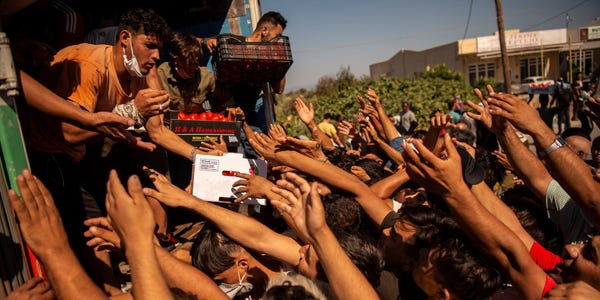 The Greek ferry Blue Star Chios, which can accommodate 1,000 people has already docked at a port 60 miles away from the main island. Two naval vessels will also be sent to hold some who are displaced, the BBC reported.

'The Bachelorette': ET Will Be Live Blogging Tayshia's Hometown Dates!

Best BBQs of 2018 for al fresco dining and summer parties