A further five F-35 Lightning jets have landed in their new permanent British home after being flown from the US.

The flight from US Marine Corps Air Station Beaufort in South Carolina marked the second wave of the jets arriving at their new base of RAF Marham in Norfolk, which is now home to nine of the supersonic stealth aircraft. 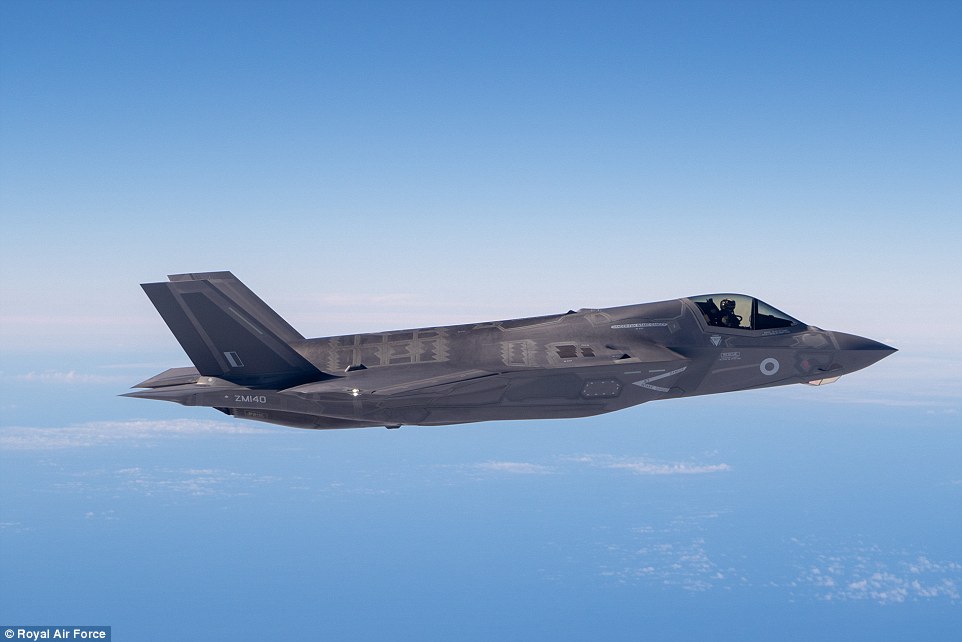 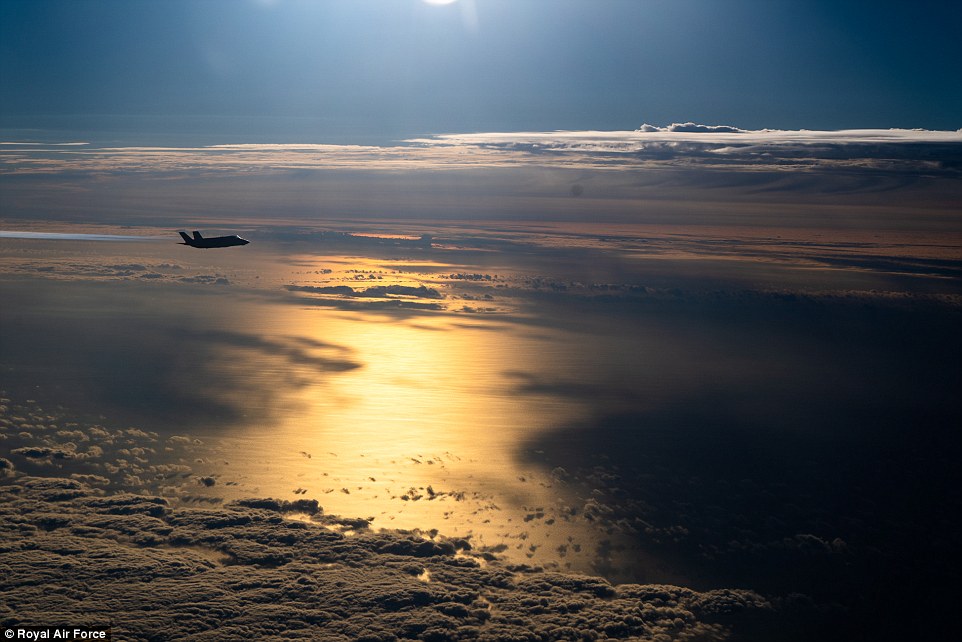 A stunning sunset greeted the Royal Air Force and Royal Navy pilots as they entered UK airspace, flying over the South West 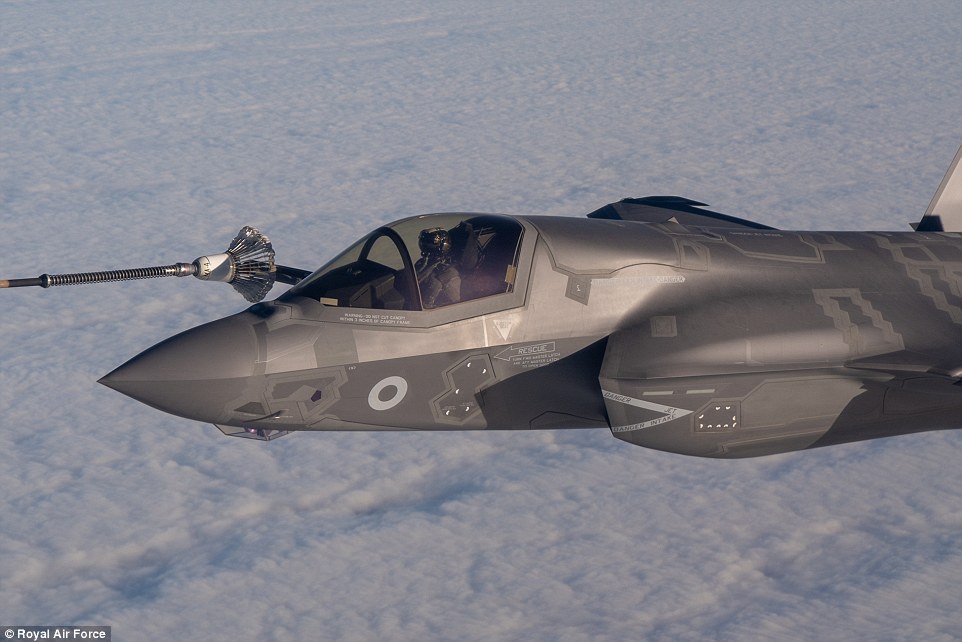 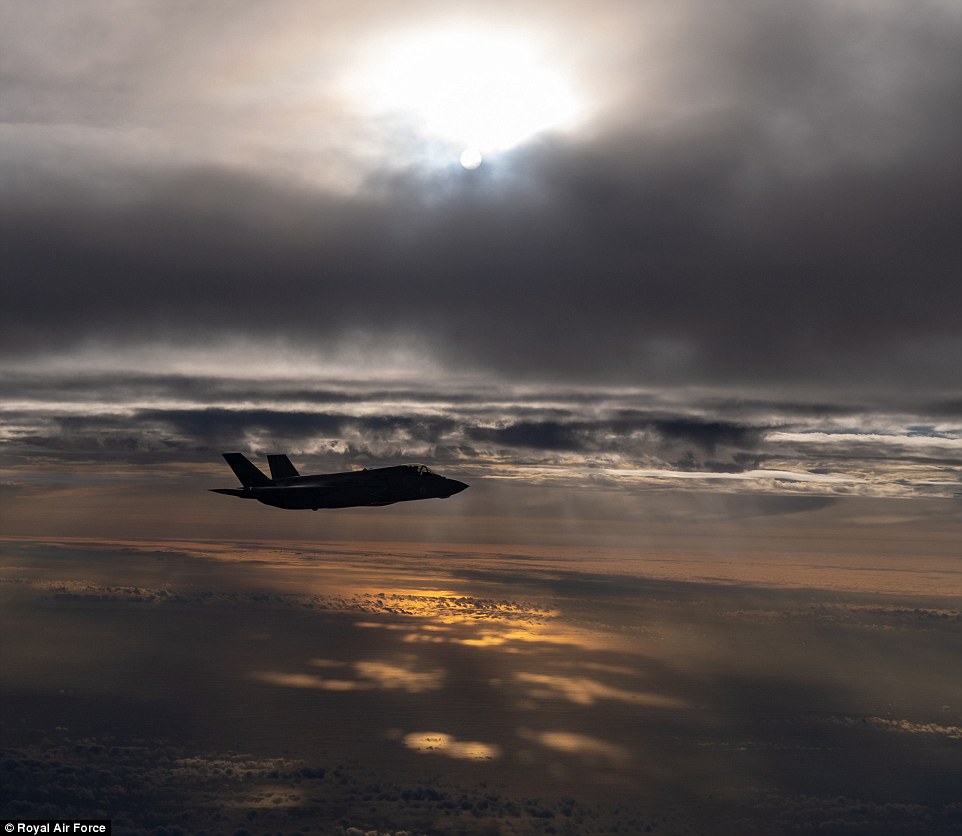 The first four F-35s arrived at RAF Marham in June, ahead of the arrival of the latest five (one of which is pictured) on Friday 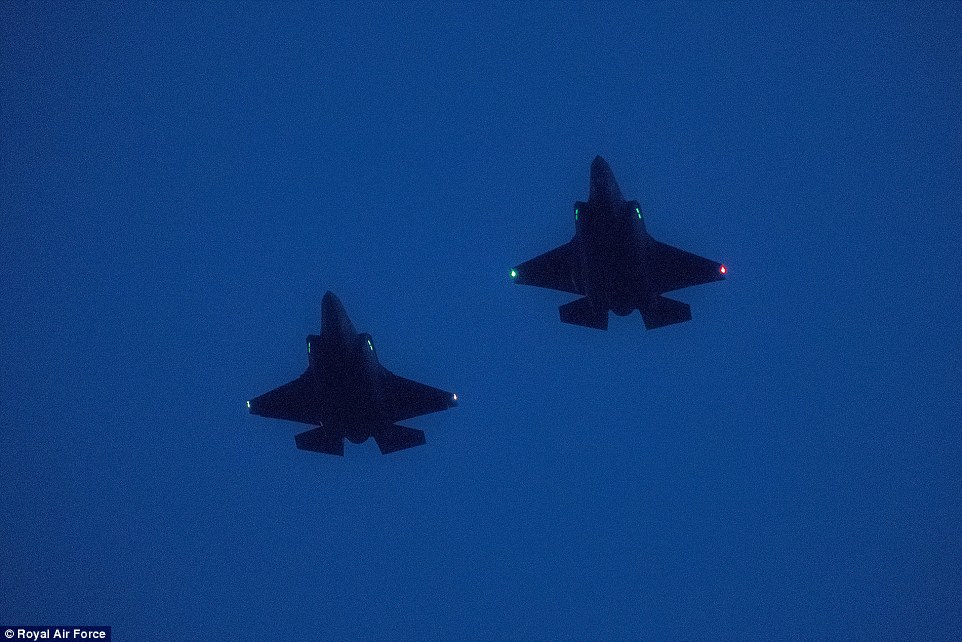 Defence Secretary Gavin Williamson has described the jets, which are estimated to cost between £92million and £120million each, as ‘formidable fighters’ which are set to keep the country safe from the ‘gravest of dangers’.

Britain currently has 15 F-35Bs – the short take-off and vertical landing variant of the jets – and has pledged to purchase 138 in total from Lockheed Martin. The first four F-35s arrived at Marham in early June.

The arrival of the five new F-35s is a positive step for the RAF, with the project having had a troubled history of production and delivery – and its cost overruns making it the most world’s most expensive weapons system. RAF Marham in Norfolk, which has had a £200million upgrade, is now home to nine of the supersonic stealth aircraft 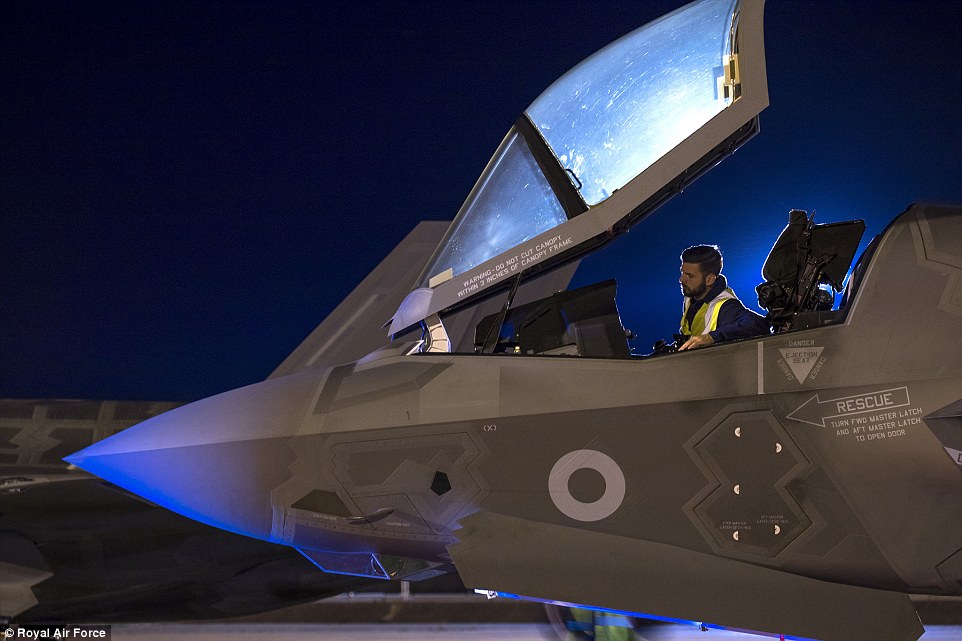 The arrival of the F-35s is a positive step for the RAF, with the project having had a troubled history of production and delivery The F-35 stealth jets have a range of 1,300 miles and carry gatling guns, air-to-air missiles and GPS- and laser-guided bombs 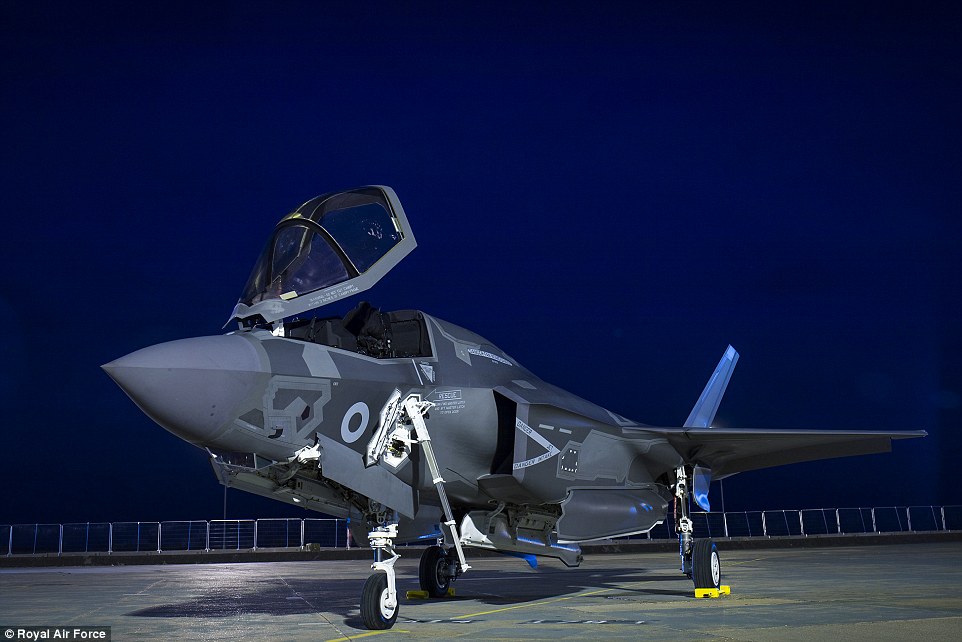 It comes as military personnel were warned about the dangers of social media after an RAF airwoman’s Tinder profile was hacked in an apparent espionage plot.

An unknown spy took control of her account and used it to try to manipulate a serviceman into disclosing secrets about the F-35Bs. Operatives with allegiance to either Russia or China are thought to be the most likely culprits.

The F-35 stealth jets have a range of 1,300 miles and carry gatling guns, air-to-air missiles and GPS- and laser-guided bombs. They are behing housed at Marham, which has had a £200million upgrade.

In June, former Rolls-Royce engineer Bryn Jones, 73, was arrested amid fears secret information about the F-35 jets had been passed to Beijing. He was held by Scotland Yard detectives under the Official Secrets Act.

F-35: the world’s most expensive weapon system that has been plagued with problems

The delivery pf the RAF’s new, US-built F-35B Lightning II Joint Strike Fighter marked a rare moment of celebration in what has been a troubled project.

The ‘fifth generation’ fighter aircraft is the world’s most expensive weapons system, though costs have finally stabilised at an eye-watering $406billion.

Manufacturer Lockheed-Martin agreed to cap costs after US President Donald Trump critised the project and even tweeted support for a rival aircraft.

Britain is currently embarked on a £9.1billion programme to purchase 48 of the F-35s, from American aviation giant Lockheed Martin, by 2025.

America enticed its Nato and other allies into sharing the cost of the aircraft by offering input into manufacture and 15 per cent of each one is comprised of parts from British companies while some of the jets will be made in Italy.

But the planes have been plagued by a catalogue of problems which have sent costs soaring.

There are fears about shortcomings in the technical systems underpinning the new generation of war planes will leave them unable to function properly.

The true cost of the British planes delivered this year is estimated to be over £150million each to cover ‘extras’ such as software upgrades and spare parts.

There are also concerns plane’s software system is vulnerable to cyber-attack and cannot be tested independently by the UK.

The problems are not helped by the department responsible for the computer networks essential to the aircraft’s operation needs to find savings of £400 million this year.

The reports into the costs and other problems prompted the Defence Select Committee to launch an inquiry into the project.

It reprimanded the Ministry of Defence for keeping parliament and the public in the dark about the costs.

The MoD has so far refused to provide the estimated cost to the UK of buying the F-35, beyond referring to a National Audit Office which used the £9.1billion figure.

MPs said ‘it is simply not acceptable for the MoD to refuse to disclose to parliament and the public its estimates for the total cost of the programme’.

Though the cost of the F-35 has been the focus of attention, there have also been embarrassing reports of operational shortcomings emerging from the United States.

In a mock air battle in 2015, the cutting edge plane was defeated by an older generation F-16, a plane designed in the 1970s.

Overheating, premature wear of components in the vertical tails and vulnerability to fire were also found to be issues.

The US Air Force temporarily grounded dozens its F-35 stealth fighters while it investigated an oxygen supply issue.

The Marine Corps, who also operate the same F-35B model the UK has purchased, was forced to ground its planes after flaws were found in the  computer system.

Sleazy landlord, 53, who was exposed by Jeremy Kyle as demanding women tenants had bondage sex with him is jailed

Here’s why Columbus Short was killed off Scandal

Great-grandad cyclist, 59, is thrown 100ft through air as he is killed by hit-and-run driver in footage shared by family