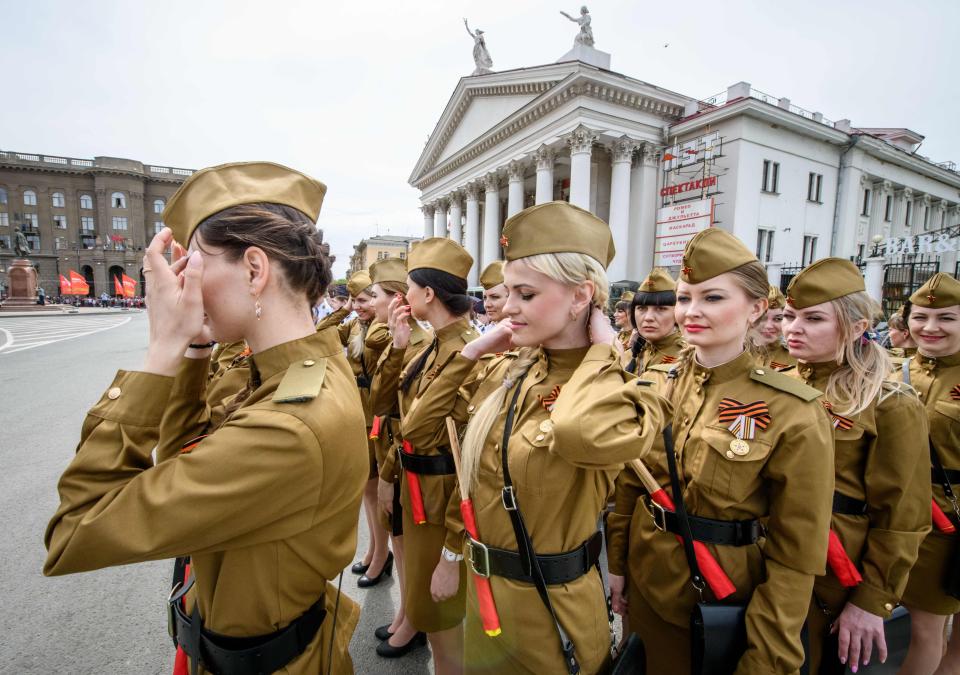 With the eyes of the world on Moscow, Putin took the opportunity to showcased his nuclear war-proof Terminator tanks in Red Square.

Next-generation Su-57 stealth fighter jets flew overhead – but the city's policewomen gave audiences and excuse to not to crane their necks.

And in St Petersburg, immaculately dressed emergency workers smiled for the cameras as they marched in perfect formation. 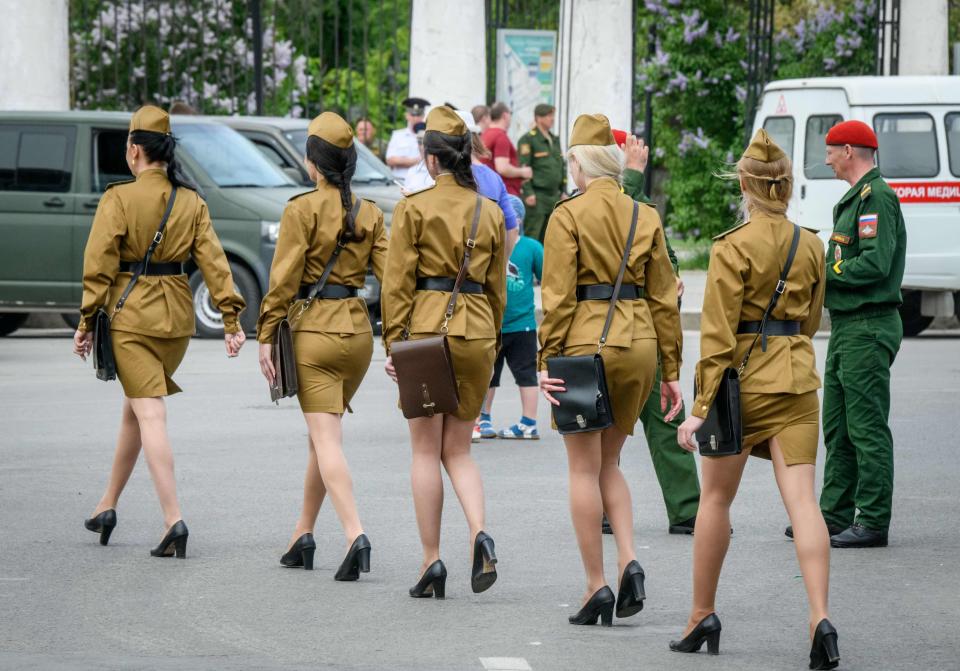 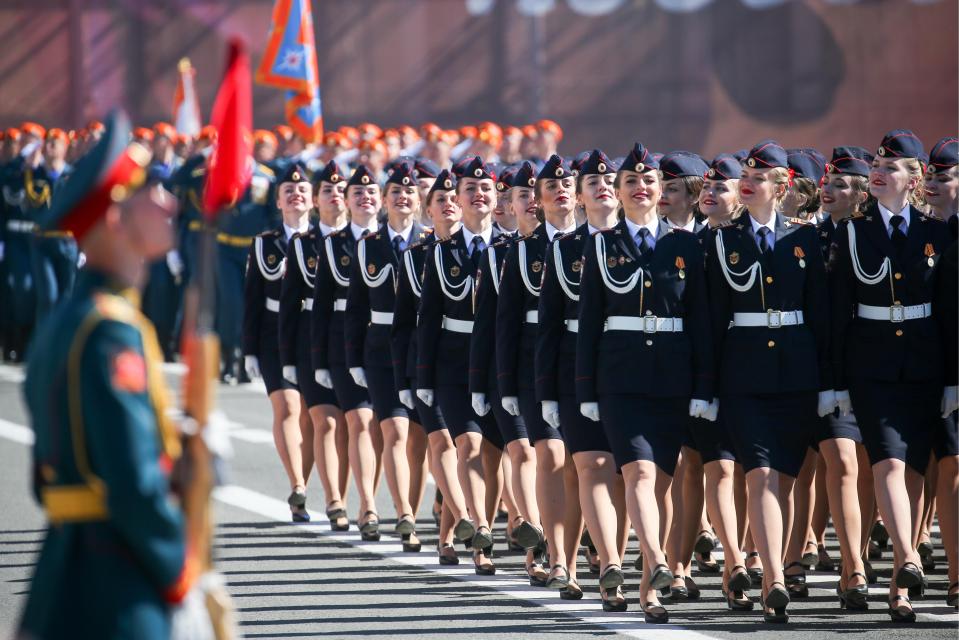 They wore red berets while servicewomen taking part in the same procession had blue caps to match their dark jets and skirts.

Women have legally been able to serve in Russia's armed services throughout the Cold War period.

By the turn of the Century, around 10 per cent of its one-million-strong military force was comprised of women, according to the International Institute for Strategic Studies.

Around 800,000 women served in a military capacity during WWII, with 89 receiving its highest honour: The Hero of the Soviet Union. 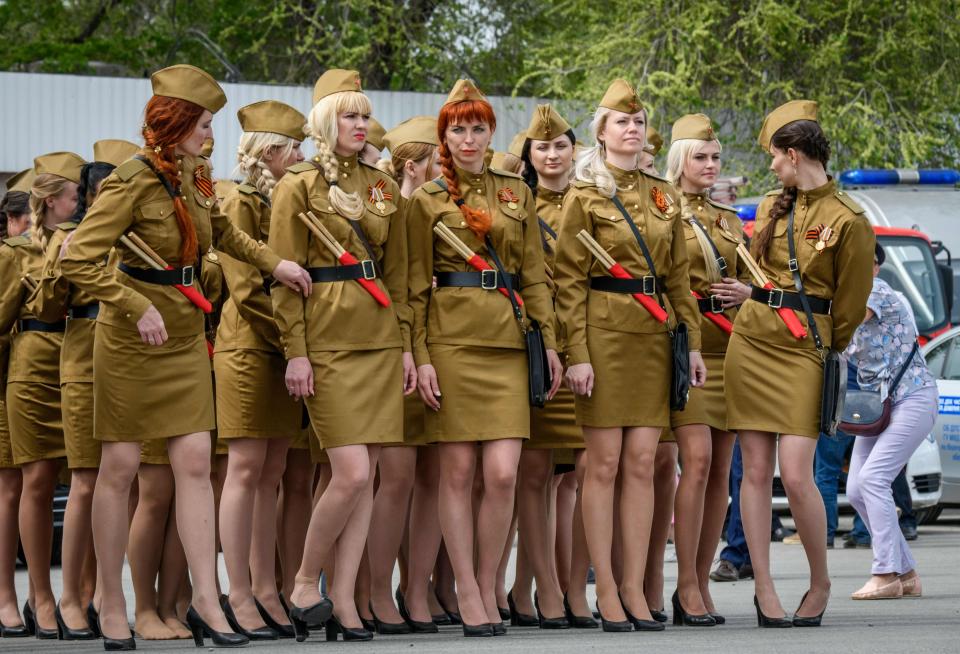 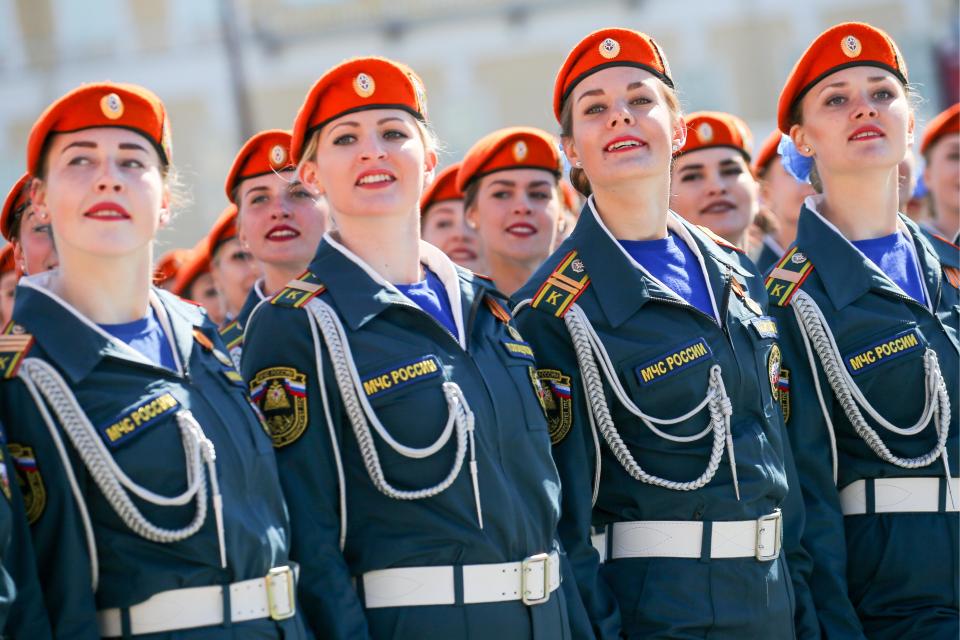 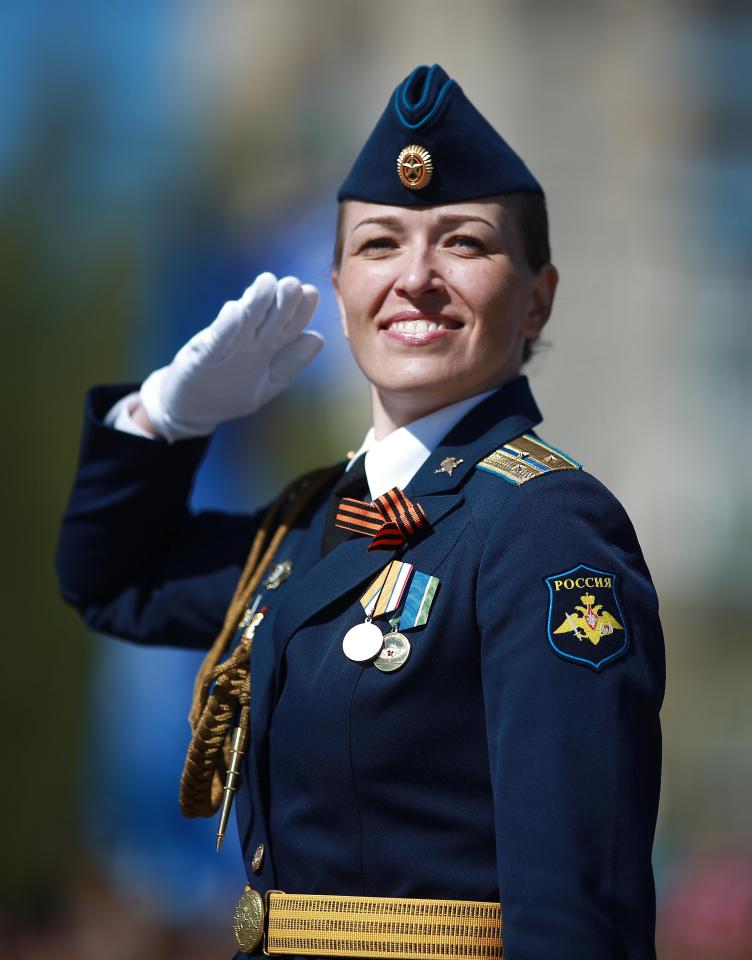 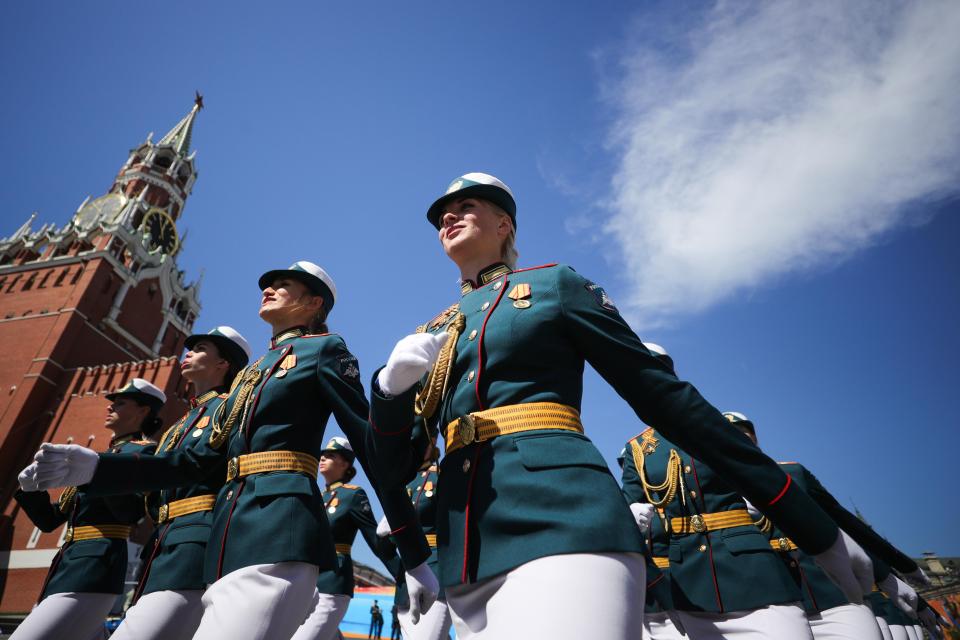 Addressing a massive audience of both civilians and 13,000 servicemen earlier today, Putin broadcast a message of peace.

He said: "Mankind has to realise that peace is very fragile… Russia is open to dialogue on all different aspects of global security."

The annual procession, marking the surrender of Nazi Germany in WWII, comes at a time of great tension between Russia and the global community. 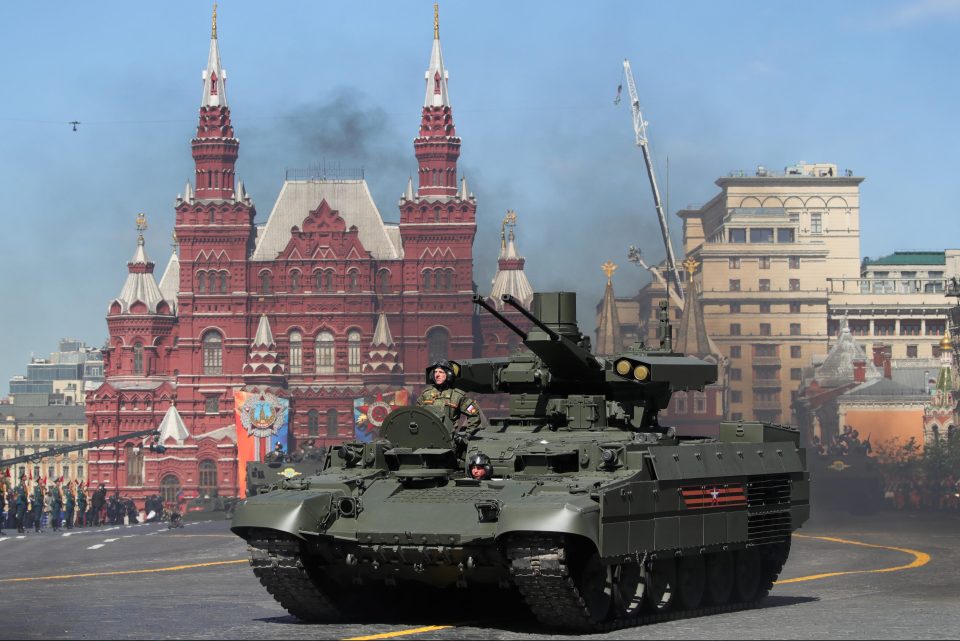 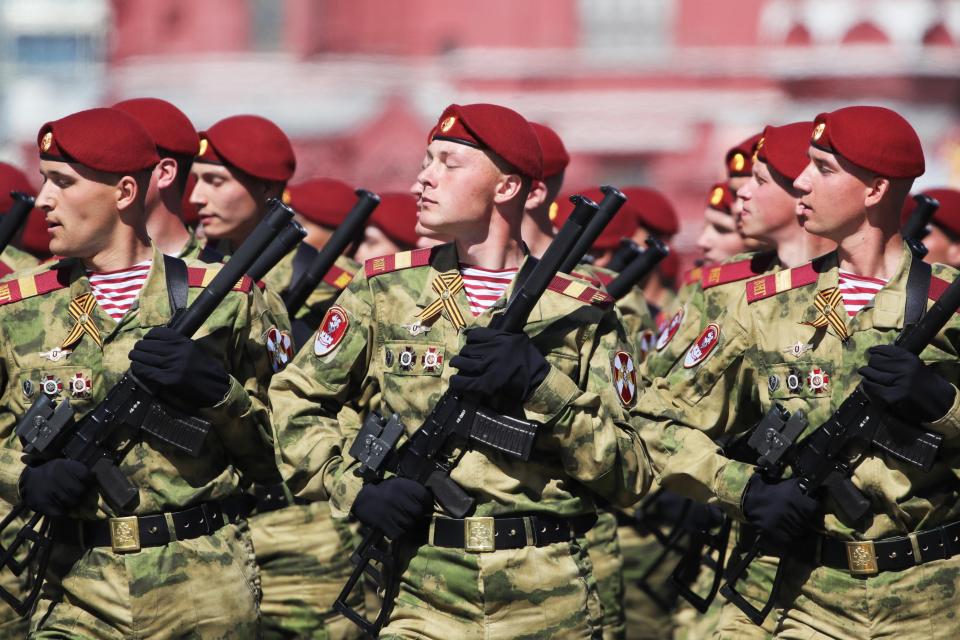 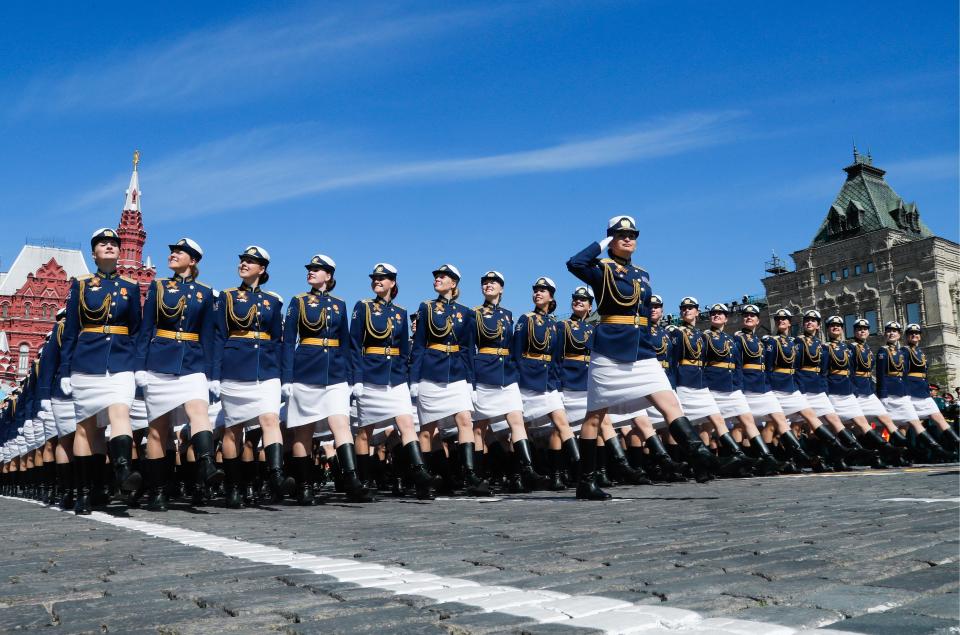 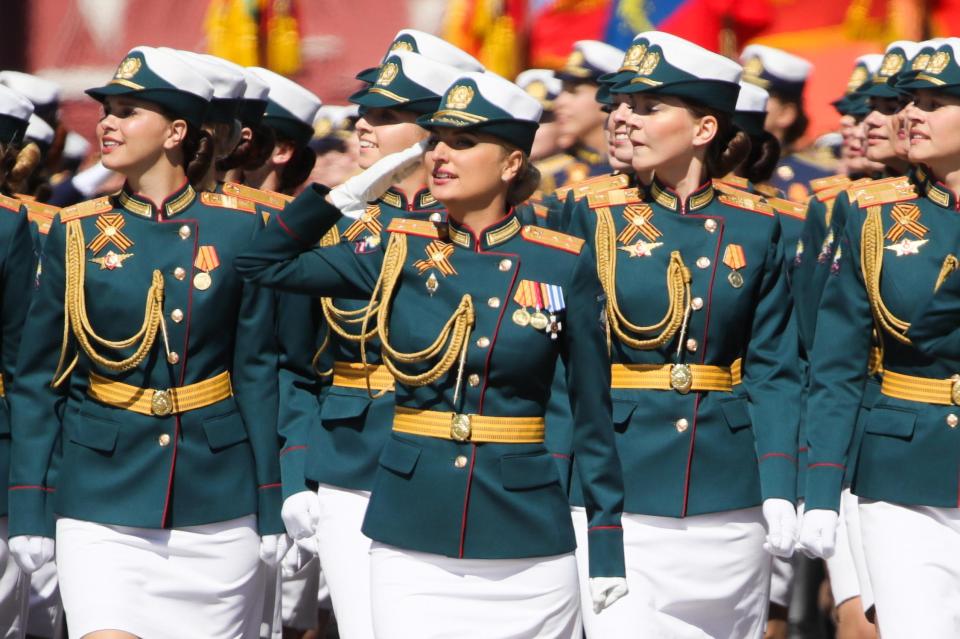 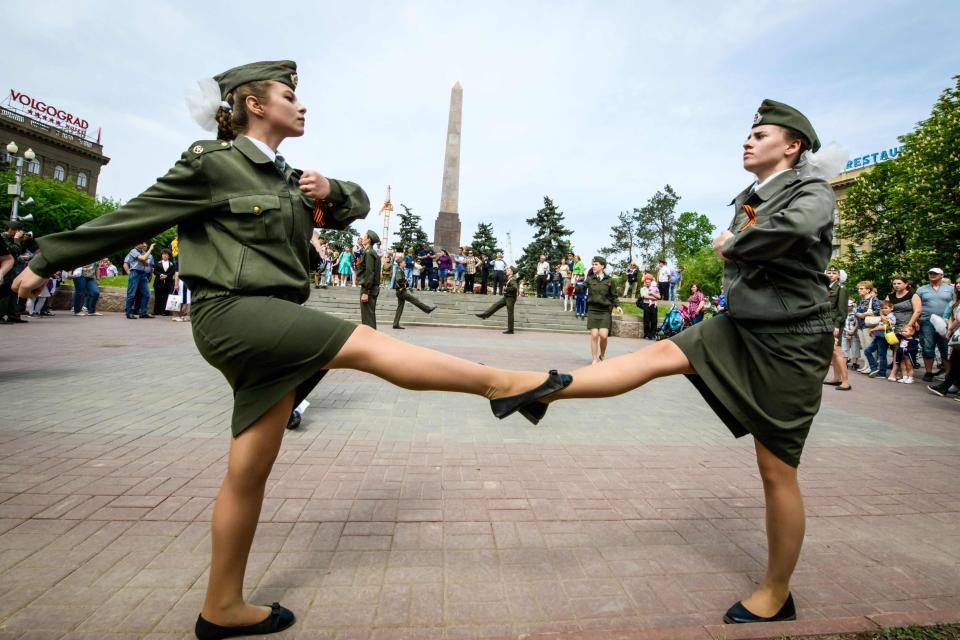 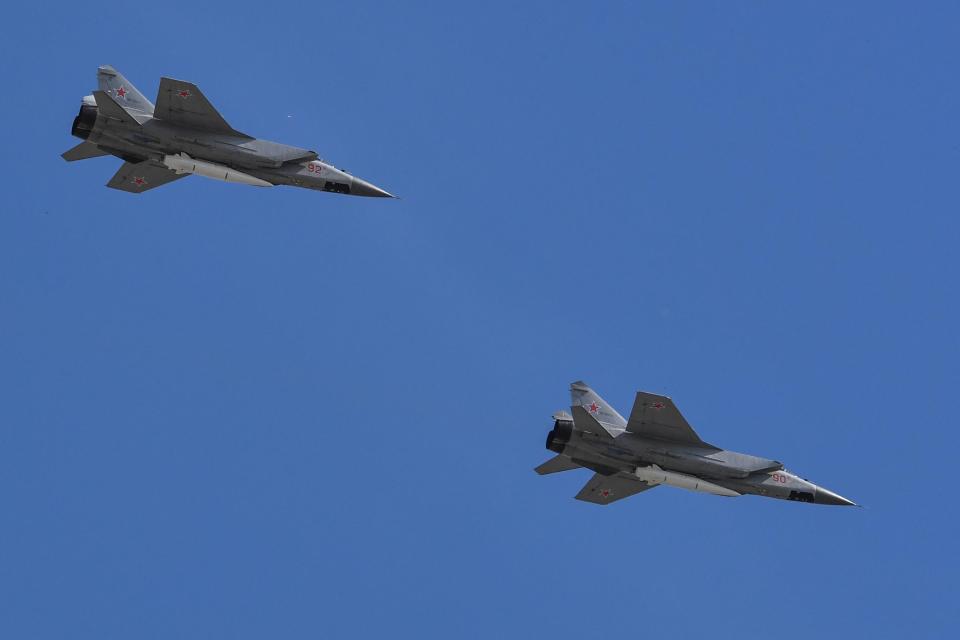 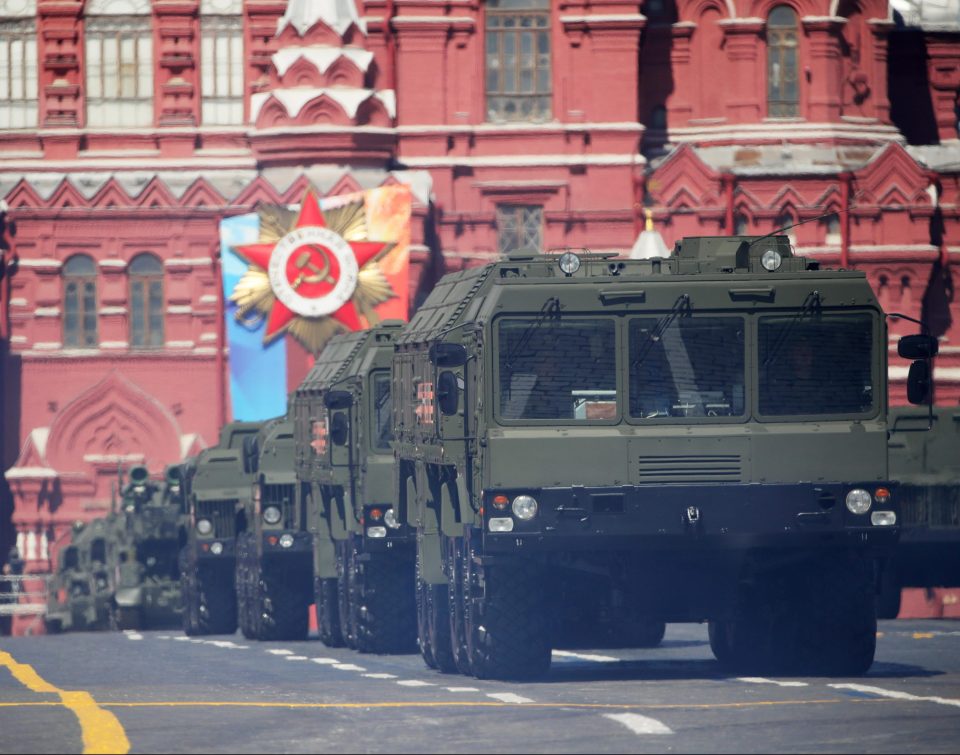 Now, in a clear show of force, Russia has broadcast images of some 159 tanks, rocket launchers and remote-controlled killing machines to the world.

They include the formidable 47-tonne BMPT, better known as the Terminator, designed to fight on even after nuclear war.

Its heavy armour is understood to be capable of protecting its three man crew from both radiation and chemical weapons.

It is armed with twin 30mm cannons, grenade launchers, machine gun and the Ataka anti-tank missile which shoots rockets at a supersonic 550 metres per second. 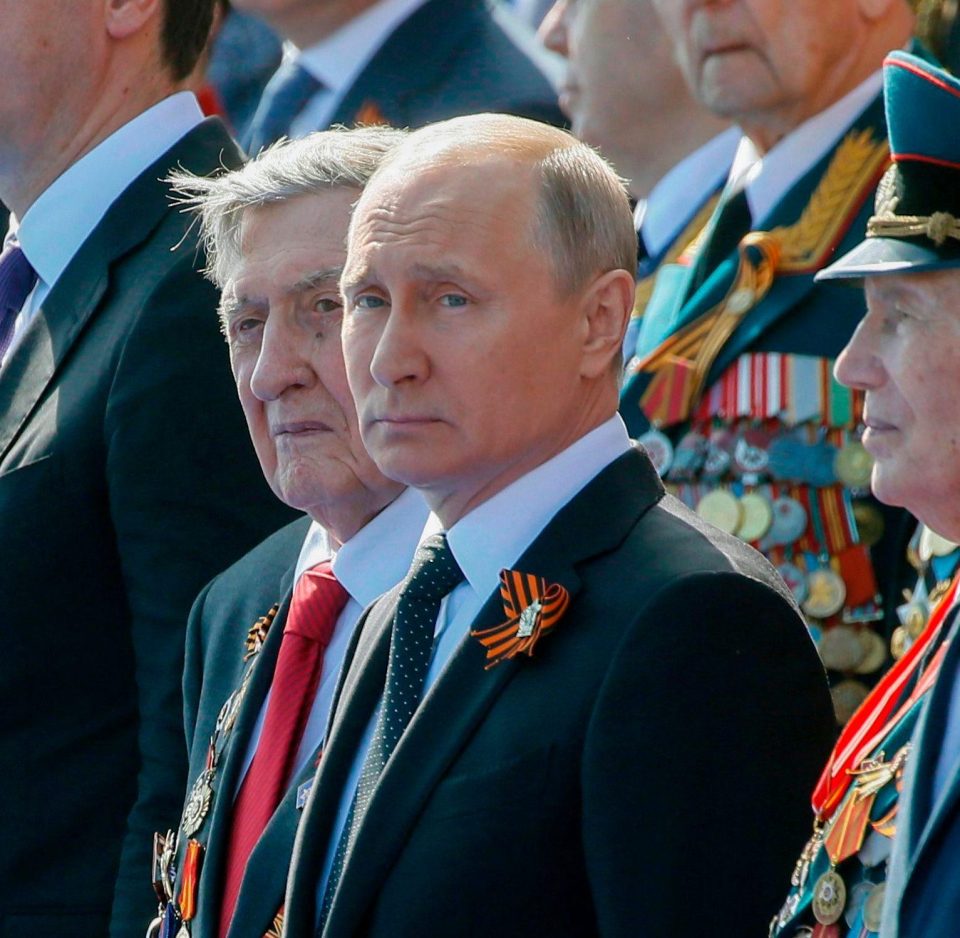 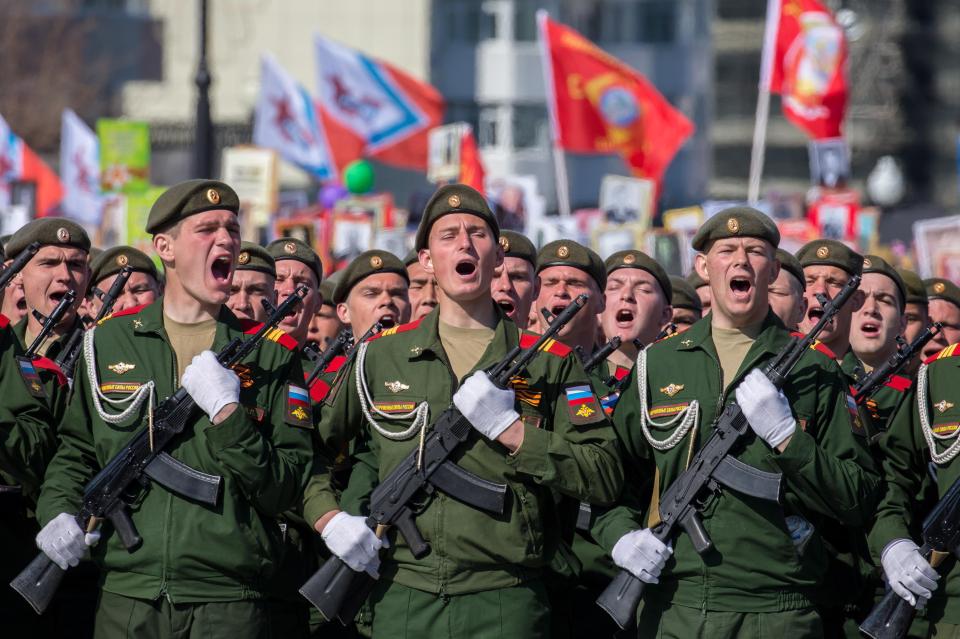 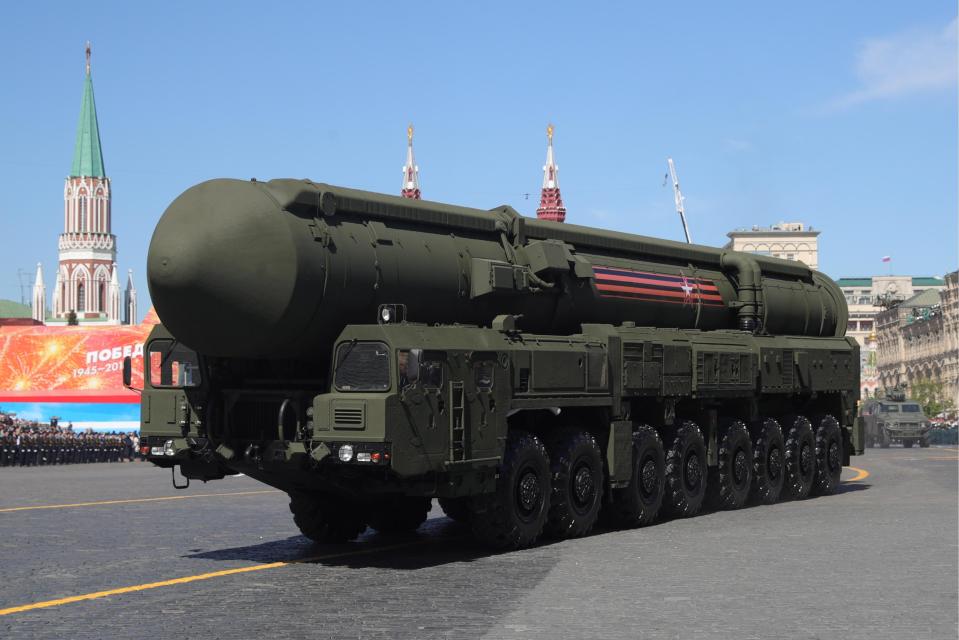 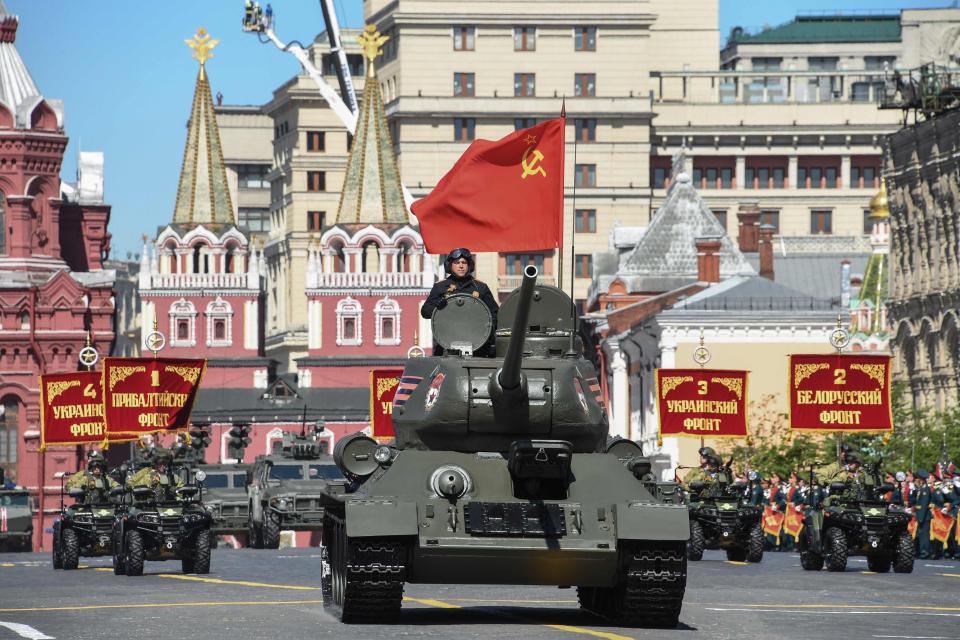 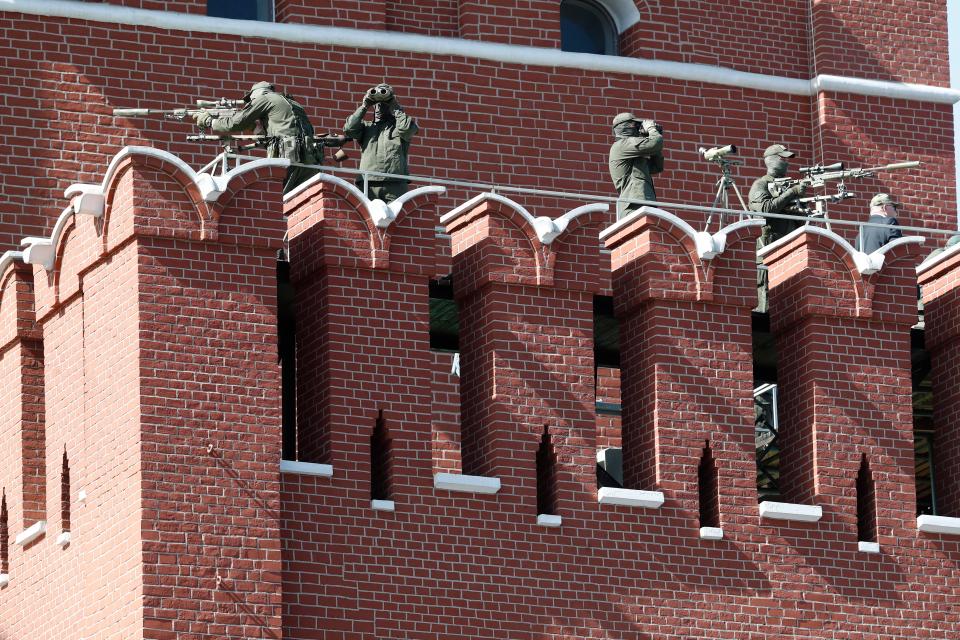 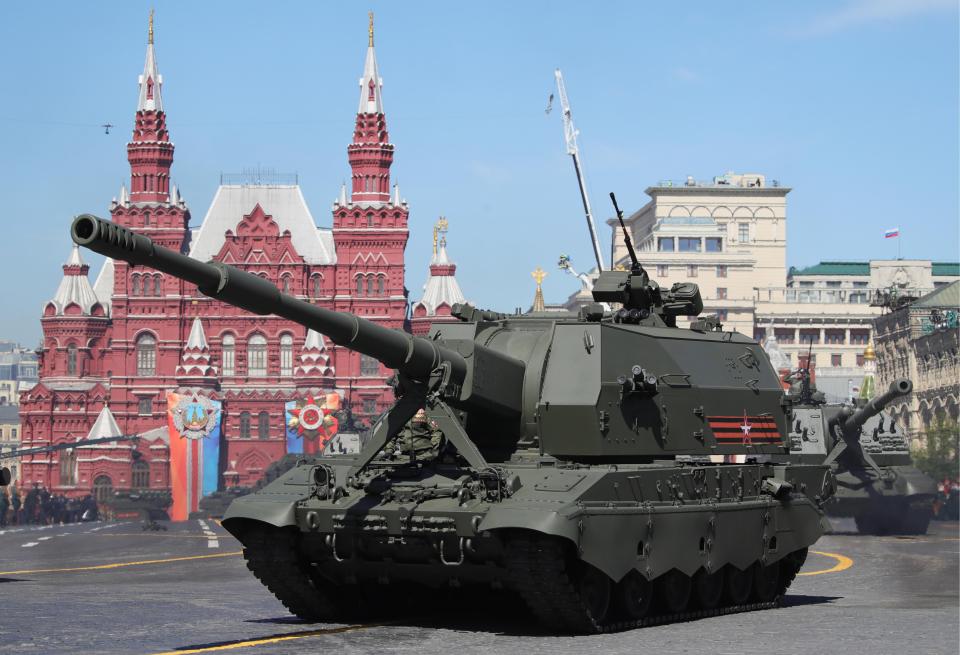 Fresh from war trials in Syria, the state-of-the-art, single-seat Su-57 flew over the city for the time.

The Su-57 is fitted with a revolutionary computer system which helps the pilot by analysing "battlefield dynamics".

It is also equipped with a futuristic radar which allows it to "see" air, ground and naval targets at distances far beyond most modern systems.

The jet, expected to be in full service next year, will be equipped with an array of weapons including air-to-air, air-to-ground and special anti-radar missiles.

The Uran-9 combat vehicle, also tested in Syria, is said to be capable of ambushing and destroying NATO tanks in the battlefield.

‘GoT’: Instead of Gendry, George R.R. Martin Initially Set Arya’s Love Storylines With These Men