Freedom for 2.2million people ‘shielding’ from Covid-19 in England as Matt Hancock announces they will be able to reunite with loved ones from July 6 and can go back to work at the start of August

More than two million people trapped at home under the Government’s ‘shielding’ scheme to protect them from coronavirus will finally be allowed back outside and to reunite with loved ones from July 6.

Health Secretary Matt Hancock said levels of the virus in the UK are now so low that it will soon be safe for vulnerable people to start returning to normality.

The 2.2million ‘clinically extremely vulnerable’ people in England will be allowed to meet up with small groups outdoors in two weeks’ time.

They will be afforded similar freedoms to the general public for the first time since the Government told them to stay at home at all costs from March 29.

But they should continue to avoid public indoors places like shops and places of worship until August 1, when shielding will be lifted completely.

Cancer patients, people with serious lung conditions, those whose immune systems don’t work properly and pregnant women with heart disease are included among the shielded patients.

For people who have been shielding but don’t feel safe going back into society, the Government will continue to offer support beyond the end of July – they will still be eligible for help from NHS volunteers or for priority supermarket delivery slots.

Mr Hancock acknowledged the policy had been ‘incredibly tough’ for many but said ‘this sacrifice has been for a purpose’.

Doctors said patients would receive the announcement with ‘mixed emotions’ after months of anxiety and may have trouble trusting that it is safe to go back outside.

Scotland, Wales and Northern Ireland have separate rules which will relax at different rates – Scottish First Minister said it will continue there until at least the end of July. 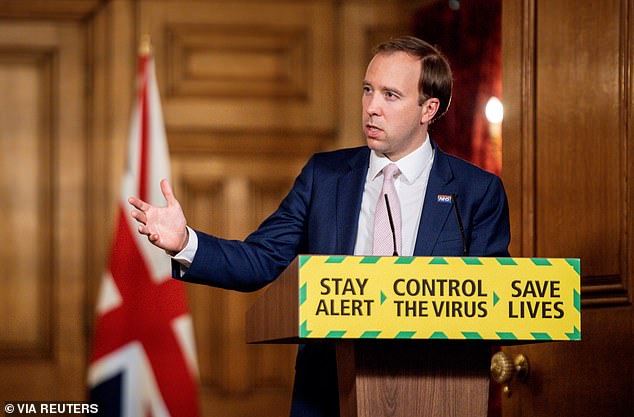 Health Secretary Matt Hancock today announced that shielding would come to an end on July 6, admitting it had been ‘incredibly tough’ for the 2.2million people advised to do it

The Department of Health said today that people will be able to go outside as much as they want while maintaining social distancing, from July 6.

They will be able to meet up with others in groups of up to six, as long as they stay outdoors and maintain social distancing – currently 2m (6’6″) from others.

They will also be allowed to stop social distancing from people within their own homes, which they had been advised to do.

And shielding people will also be allowed to join the ‘bubble’ rule if they live alone or are a single parent, in which they can join with another household to act as if they live together.

WHAT IS SHIELDING AND WHO WAS TOLD TO DO IT?

Shielding is the highest level of isolating that people were advised to do at the peak of the UK’s coronavirus crisis.

It was recommended for people considered ‘clinically extremely vulnerable’ to Covid-19 because they have a serious illness or disability.

People who are shielding should stay in their homes and gardens at all times, unless it is an emergency, and have food and other supplies delivered to their door.

The advice has now relaxed a bit and people who are shielding can go out in public for exercise, for example, but should maintain strict social distancing and not get close to anyone from outside of their household.

People in the shielding group have been urged not to take part in the creation of social ‘bubbles’, which allow single-person households to join up with another household and interact as if they live together.

The shielding group includes these people:

Shielding rules will then come to an end completely on August 1, the Department of Health announced, but people will still be offered support with shopping and medical appointments if they want it.

From that date, vulnerable people will be allowed to return to work if they want to, to go out shopping, and to visit places of worship – but they will still be urged to stay home as much as possible.

Officials still want people who are shielding to spend as much time at home as they can, but the urgency of the guidance is being taken down a notch.

Doctors are concerned, however, that seriously-ill people won’t feel safe returning to the same level of normality as the rest of the country.

Professor Donal O’Donoghue, from the Royal College of Physicians, said: ‘Today’s announcement will be met with mixed emotions by many.

‘The past few weeks and months have been challenging and we know that many patients will be unsure about what lies ahead.

‘It is crucial that the government builds trust by regularly communicating and engaging with those who have been shielding up to now.

‘Patients are likely to have many questions and we need to ensure that frontline NHS staff are equipped with the detailed scientific evidence base to be able to support patients to make their shared decisions based on individual assessments of risk and their personal priorities.’

The Government is loosening its shielding rules in light of tumbling numbers of new cases of the coronavirus and daily deaths now in the dozens rather than hundreds.

And official statistics show just 958 more cases of the disease were diagnosed, in the lowest 24-hour jump since Boris Johnson imposed the draconian restrictions to halt the outbreak on March 23 (967).

Scotland has now recorded zero deaths on six occasions in June, including no victims for the last two days. While Northern Ireland has had no deaths on 11 separate days, with three in a row up to today. The East of England also added no victims to their count today.

Health Secretary Matt Hancock said today: ‘I want to thank all those who have been shielding for so many weeks for their commitment to the shielding programme.

‘I know this has been incredibly tough. Shielding has involved not leaving your house for months, not seeing people you care about, not being able to wander to the park for some fresh air, or even pop to the shops for something you need.

‘This sacrifice has been for a purpose, and I want to thank every single one of you.

‘We knew it was a difficult ask, but these measures have been vital in saving lives. Now, with infection rates continuing to fall in our communities, our medical experts have advised that we can now ease some of these measures, while keeping people safe.’

A THIRD OF SHIELDING PEOPLE DID NOT FOLLOW RULES, SURVEY FINDS

More than a third of ‘clinically vulnerable’ people ordered to shield themselves by the Government admit they did not follow the rules to the letter.

Data from the Official for National Statistics show more than a million people most at risk of dying of Covid-19 left their homes or had visitors during Britain’s crisis.

The Government urged certain groups of people, including cancer patients, organ transplant recipients, and those with lung diseases, not to leave their homes during the peak of Britain’s outbreak.

Rules have been slightly relaxed now for those groups, but they remain the most at risk in the country and have been left out of rules allowing social ‘bubbles’.

The ONS report showed that 33 per cent of people in the shielding group said they were ‘mostly’ following the rules, compared to 67 per cent who said they definitely were. 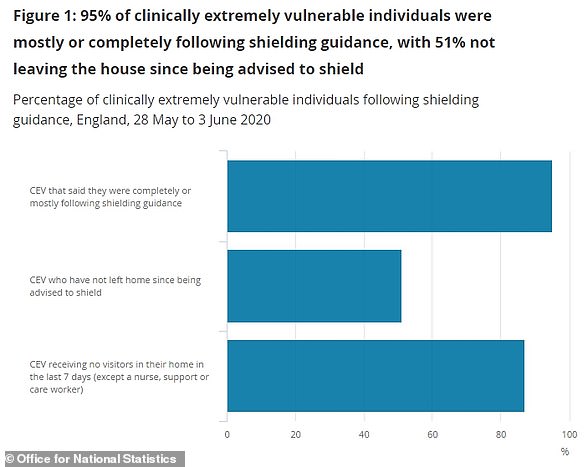 Only half of people in the shielding group said they had stayed at home completely, as they were advised to do, since the shielding guidance was issued

Its survey also revealed that the shielding policy – intended to protect the most vulnerable members of society – hit some people’s mental health. 35 per cent of people, equal to some 785,000, said their mental health had worsened as a result of being stuck at home during the pandemic.

Tim Gibbs, a statistician at the ONS said: ‘More than 2.2million people were advised by the government to shield during the coronavirus (Covid-19) pandemic as they had been classified by the NHS as clinically extremely vulnerable.

‘While it is difficult to pinpoint the exact number of people who were completely shielding, 62 per cent reported that they were fully following official advice.’

The ONS admitted that it was likely the true number of people following the advice was even lower.

Almost half of the 4,149 people questioned in the survey – 49 per cent of them – said they had left the house at least once while they were supposed to be shielding.

Shock as Love Island couple are brutally dumped from the villa

Miss Universe 2018: See the Top 10 in Their Evening Gowns

CDC says coronavirus death toll will be much LOWER than White House’s prediction of 240,000 – The Sun