Home » World News » Shop with tongs and lock up your cat: Scientists’ suggestions for life after lockdown

London: Banning pet cats from roaming outdoors, making shoppers pick up products with tongs and insisting people walk clockwise around parks, are among 275 suggestions made by Cambridge University to reduce the spread of coronavirus after lockdown.

A team of biosecurity and conservation experts has trawled through measures adopted by other countries, as well as coming up with new ideas, to help people avoid contamination. 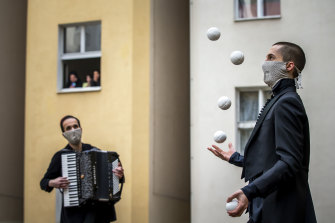 Residents of Prague watch entertainers during the lockdown.Credit:Getty

They suggest that cafe owners could open outdoor areas only at first, and that pedestrians should be urged to walk on the right side of the pavement and only be allowed to enter parks at specific times of day, depending on their age.

Patients with doctors' appointments could be asked to wait in their car outside the surgery until called in, while music could be turned off in shops so people do not need to move closer to each other to be heard.

"There's increasing pressure to reopen the economy and get people back to work and out of isolation," said Professor William Sutherland of the University of Cambridge's Department of Zoology, who led the study.

"But if we return to operating as we did before the pandemic, there will be a second wave of the virus. All activities will need to be considered individually, and phased back in carefully."

Other suggestions include discouraging kissing and hugging outside of family members or a "bubble" of close friends. Permits could be required to leave the house as in France, which imposed a 6pm curfew.

Minimum spends could be brought in to shops to discourage short frequent visits, and shopping trips could be allocated based on the first letter of surname, the study says. And individuals could bring their own tools, such as tongs to pick up shopping.

Showering could be encouraged upon returning home and pet cats could be kept indoors during outbreaks to prevent spreading the virus to neighbouring households. "It's basically about how to stop people hanging around together, and phasing in activities starting with the ones that are the safest," added Sutherland.

Experts have warned that coronavirus will have a profound social, psychological and biological impact on Britons long after lockdown ends and have called for urgent research into the mental health effects of the pandemic.

The fear of contracting the virus, coupled with separation of families and job insecurity, is causing widespread anxiety and could lead to depression and self-harm, researchers warned.

In a new paper in The Lancet Psychiatry, a team of 24 experts from institutions including Cambridge University, King's College and the Institute of Psychiatry Psychology and Neuroscience, call for greater attention to be paid to how the crisis is affecting the mental health of the nation.

A survey of 2198 people, commissioned ahead of the article, found many people are suffering a "general existential anxiety".

Loneliness was raised repeatedly as were concerns about feeling trapped and being unable to plan for the future.

Previous outbreaks of infectious disease have been known to have an impact on mental health: the SARS epidemic was associated with a 30 per cent increase in suicide in over 65s, and 29 per cent of healthcare workers experienced "probable emotional distress".

There are also fears that many people could turn to excessive drinking, online gambling or problem shopping, which could also impact their mental and physical health.

I Travel Constantly, and These Are the $35 Pants I Pack on Every Single Trip