A company in Singapore has developed a breathalyser test for Covid-19, which it claims can give a result in under a minute.

Breathonix, a spin-off start-up firm from the National University of Singapore, also claims its test was 90 per cent accurate in a small trial of 180 people.

It hopes to get the green-light from regulators early next year in order to start using the test to diagnose people with the disease.

The test looks for volatile organic compounds (VOCs) — chemicals in breath that are released by diseased cells in the body. 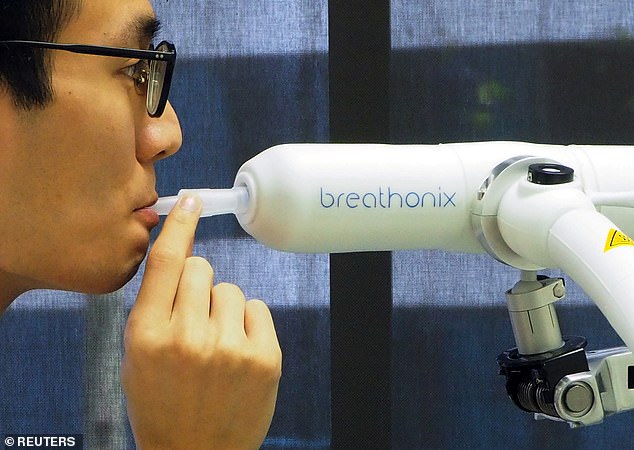 Breathonix, a startup firm from the National University of Singapore, has developed a breathalyser test for Covid-19 which it claims can give a result in under a minute. It’s still in the prototype stage (pictured) 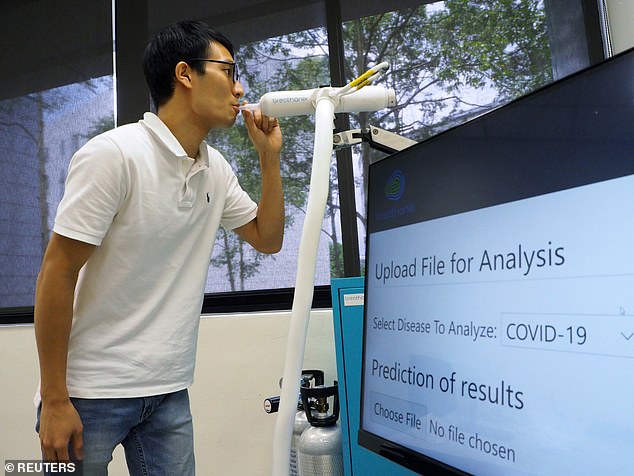 Breathonix is currently expanding its trial across Singapore and hopes to improve the accuracy of its test before putting it on the market at the start of next year.

Its accuracy rate was discovered during a pilot trial involving 180 volunteers at the National Centre for Infectious Diseases (NCID).

Among the participants, almost 50 had tested positive for the coronavirus. The test accurately diagnosed more than nine in 10 Covid-19 patients.

If proven to work, breathalysers are a non-invasive, quick and cost-effective alternative to the current coronavirus swab tests.

However, technology for breathalyser tests so far has struggled to be specific enough about which virus a person is carrying.

And the accuracy of a standard Covid-19 swab test is so far unmatched – although it is not perfect and can produce incorrect results.

Breathalysers have the potential to be used to screen people on mass at places like airports, sport events or conferences, creators say. If someone was to be flagged as a potential case, they could go on to have a more robust PCR test to confirm infection.

A breathalyser test may be developed with one of several different technologies.

It may look for polyamino acids, viral particles exhaled in the saliva.

Isothermal testing looks for the viruses genome in a sample of breath or saliva. It is the ‘most likely to work’ when differentiating viruses, Sterghios Moschos, a molecular biologist at Northumbria University who is creating a breathalyser test said.

Another technology is based on terra-hertz waves. It can detect how the virus matter vibrates – which would be different to other viruses.

Some breathalysers look for volatile organic compounds (VOCs) – chemicals in the breath (or urine, sweat or blood) that are released by diseased cells in the body.

VOCs are also what disease-detecting sniffer dogs are able to detect in order to help diagnose people. They are currently being trained in the UK and elsewhere in the world to recognise VOCs associated with Covid-19.

The breath test also has a 95 per cent specificity rate – meaning that it gave a correct ‘negative’ result 95 per cent of the time. Five per cent of people without the disease were wrongly told they were positive.

The researchers are hoping to recruit up to 600 patients over the next few months to validate the product, which is still in the prototype stage.

At £15 ($20), Breathonix claims its test would be 70 per cent cheaper than PCR tests — which are used across the world to swab people for the coronavirus.

And the breath test is easy to carry out with it not requiring specially trained staff or laboratory processing, unlike PCR tests that can take days to produce results.

However, infected patients would likely still need to have a sensitive PCR test to confirm the result given by the breath test because of its current lower levels of accuracy, the firm said.

Jia Zhunan, co-founder and chief executive of Breathonix, said it could be deployed at conferences, sports events and concerts — all of which have been halted during the pandemic in case they become ‘super-spreader’ events.

‘Results are generated in real time, making it an attractive solution for mass screening, especially in areas with high human traffic,’ he told Straits Times.

The NUS graduate is confident that the breath test could be a game-changer in the fight against the coronavirus in Singapore, which has so far recorded 58,000 cases but only 28 deaths.

The device uses disposable mouthpieces to ensure there is no cross-contamination.

Suspected patients blow into the device, which is connected to a sampler machine that assesses breath to look for unique compounds emitted by Covid patients.

Volatile organic compounds (VOCs) exit the body through the breath, as well as blood, urine and sweat.

The compounds are released by diseased cells in the body and are different depending on the type of illness a person has.

VOCs can also be detected by trained sniffer dogs, who can help flag diseases like cancer and Parkinson’s. They are currently being trained in the UK and elsewhere in the world to recognise VOCs associated with Covid-19.

‘This results in detectable changes in a person’s breath profile,’ Mr Zhunan said. ‘As such, VOCs can be measured as markers for diseases like Covid-19.’

Results are generated by a computer within 60 seconds, it’s claimed.

A similar breathalyser is being tested by a hospital in France, although experts have warned the system may be too costly for widespread distribution because it is a machine, and not a portable device.

In Israel, creators of a ‘very promising’ small breathalyser test say it can give results in 30 seconds.

NanoScent, the firm making test kits, said an extensive trial for the presence of live virus delivered results with 85 per cent accuracy. But chief executive Oren Gavriely also believes the breathalyser would only be used as a screening tool.

Northumbria University scientists are also developing a breathalyser test which they previously said could be in mass production by Christmas. And academics at the University of Tasmania are trialing a similar gadget.

Countries worldwide are looking to develop alternative tests to the PCR nasal swab, which is invasive, costly and needs to be read by a laboratory technician.

Another promising method is the spit test, one of the many technologies for rapid testing being looked into by the British government.

Saliva-based testing is being trialled on people in Southampton and Salford, Greater Manchester.

Almost 10,000 people took part in the first phase of the Southampton pilot, which ‘showed the at-home saliva sampling kit to be a reliable means of testing for large-scale, regular testing’.

If proven to work, it would help accomplish the government’s £100billion ‘Operation Moon Shot’ which pledges to increase daily tests by around twelve-fold by early next year to give the country back its ‘freedom’.