New York: Nineteen people, including nine children, were killed in a fire started by a malfunctioning space heater at a Bronx apartment building in New York City’s deadliest blaze in more than three decades.

New York City Mayor Eric Adams, just over a week into the job, confirmed the tragedy in the imposing 19-floor Twin Parks North West building which provided affordable housing units and was home to a Gambian community.

Earlier on Sunday, officials said 32 people had been hospitalised with life-threatening injuries and some 60 people were injured in total as smoke drifted through the building on a cold winter morning.

“This is a horrific, horrific, painful moment for the city of New York,” Adams told reporters. “The numbers are horrific.” 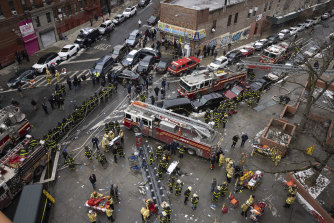 Firefighters work outside an apartment building after a fire in the Bronx on Sunday.Credit:AP

The fire itself started from a space heater in an apartment that spanned the second and third floors of the building, and only made it to the hall, officials said.

But smoke still spread to every floor of the 120-unit building, likely because the door to the apartment was left open, the city’s fire department commissioner Daniel Nigro told reporters at a news briefing.

“Members found victims on every floor in stairwells and were taking them out in cardiac and respiratory arrest,” Nigro said. “That is unprecedented in our city.” 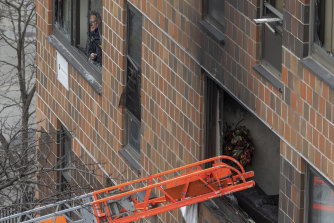 News photographers captured images of firefighters entering the upper floors of the burning building on a ladder, multiple limp children being given oxygen after they were carried out and evacuees with faces covered in soot.

Resident Vernessa Cunningham, 60, said she raced home from church after getting an alert on her phone that the building was on fire.

“I couldn’t believe what I was seeing. I was in shock,” Cunningham said from a nearby school where some residents gathered. “I could see my apartment. The windows were all busted out. And I could see flames coming from the back of the building.” 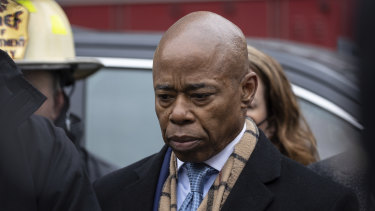 New NYC Mayor Eric Adams outside the apartment block after the fire.Credit:AP

The fire was not believed to be suspicious, but the cause was under investigation, officials said.

Building resident Cristal Diaz, 27, told the New York Post she started putting wet towels at the bottom of her door after smelling smoke while drinking coffee in her living room.

“Everything was crazy,” she said. “We didn’t know what to do. We looked out the windows and saw all the dead bodies they were taking with the blankets.”

The 120-unit building in the Twin Parks North West complex was built in 1973 as part of a project to build modern, affordable housing in the Bronx.

“Many of these buildings are old. Not every apartment has a fire alarm. Most of these buildings have no sprinkler system,” congressman Ritchie Torres, a Democrat who represents the area, said on MSNBC. “And so the risk of a fire is much higher in lower income neighbourhoods, in the Bronx, than it might be elsewhere in the city or in the country.”

Nigro and Torres both compared the fire’s severity to a 1990 blaze at the Happy Land social club where 87 people were killed when a man set fire to the building after getting into an argument with his former girlfriend and being thrown out of the Bronx club.

Sunday’s death toll was the highest for a fire in the city since then. It was also the deadliest fire at a US residential apartment building since 2017 when 13 people died in an apartment building, also in the Bronx, according to data from the National Fire Protection Association. That fire started with a three-year-old boy playing with stove burners and led to several law changes in New York City, including having the fire department to create a plan for educating children and parents on fire safety and requiring certain residential buildings to install self-closing doors.

The Bronx fire happened just days after 12 people, including eight children, were killed in a house fire in Philadelphia.