A SCOTTISH MP tipped as the next First Minister was forced to quit today after he told a schoolboy he was “cute” and invited him to dinner while bombarding him with 270 online messages.

SNP Finance Secretary Derek Mackay, 42, resigned after the Scottish Sun revealed how he pestered the lad, 16, in private on Instagram and Facebook over six months after contacting him out of the blue. 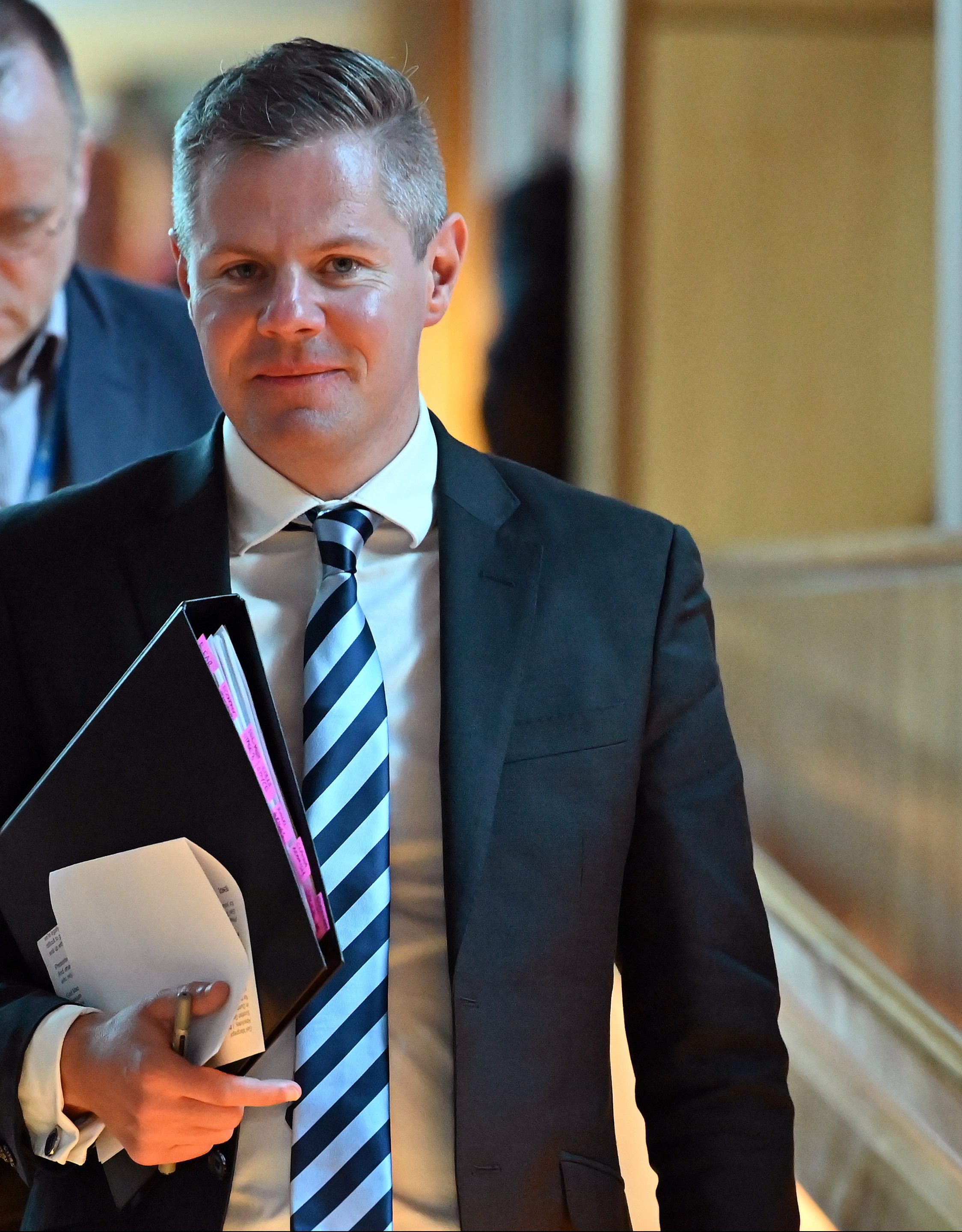 He said this morning: "I take full responsibility for my actions. I have behaved foolishly and I am truly sorry."

He apologised to the boy's family and offered Scottish First Minister Nicola Sturgeon his resignation.

The mother said: “A man like that is not supposed to say these sort of things to a boy.”

The boy’s mum accused Mr Mackay of targeting her son after it emerged the Holyrood chief sent him the messages despite knowing he was 16.

The Finance Secretary asked the fresh-faced teenager to dinner and offered to make him his guest at a parliament rugby event after befriending him out of the blue on Facebook and Instagram.

The openly-gay dad of two — who came out in 2013 when leaving his wife — liked snaps of the rugger-mad youngster in his sports gear and even pinged direct messages to him on Christmas Day.

But even after the boy revealed he was just 16 and told Mr Mackay not to “try anything”, the MSP — bookies’ favourite to succeed Nicola Sturgeon as First Minister — didn’t back off and bombarded him with messages until this month.

And in one conversation, the politician asks: “Are our chats between us?” before telling the teen: “I think you are really cute.”

The boy’s outraged mum, 37, who only learned of the creepy exchanges last week, told of her horror at seeing Mr Mackay appearing to flirt with her son. 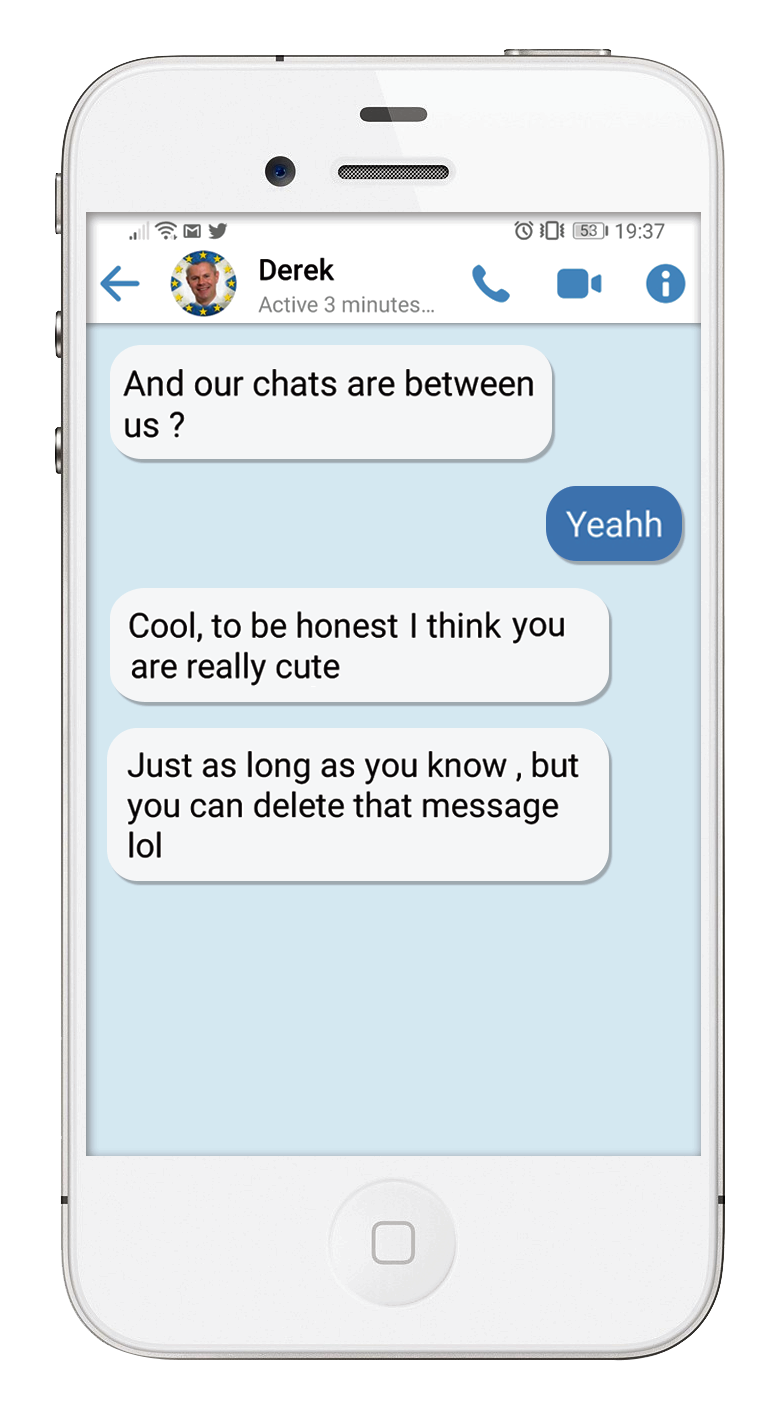 “I worry about what would have happened if my son had sent him back a message he wanted to hear.

“You can see he tries again and again — like he is trying to get my son to change his mind about something. He is trying to see how much he can push it.”

The conversations began last August when the SNP big gun — due to deliver Holyrood’s £43billion Budget in parliament today — sent a private greeting to the lad as he was preparing to go into S5.

Cool, then to be honest I think you are really cute.

In one of their first chats, Mr Mackay offered to pay for the boy to go to a rugby game, saying: “I could take you?”

In a midnight exchange starting at 12.03am on Friday, December 27, messages show the MSP telling the lad: “You are looking good with that new haircut.”

The youngster replies: “Thanks, needed a change. Long hair was getting annoying.”

Mr Mackay, who lives with his boyfriend in Bishopton, posts back: “Cute. You don’t mind compliments.”

The Scottish Sun can exclusively reveal:

And then Mr Mackay says: “Good. And our chats are between us?”

The boy agrees and Mr Mackay adds: “Cool, then to be honest I think you are really cute.

“Is that Ok? Just as long as you know but you can delete that message. Lol.” The boy did not delete the message.

In another exchange on Sunday, September 8, the boy claims Mr Mackay revealed his sexuality before deleting the post.

A note saying a message has been deleted shows up on Facebook messenger at this point.

The schoolboy responded politely, telling the MSP: “As long as you’re not trying anything I don’t mind you being gay.” 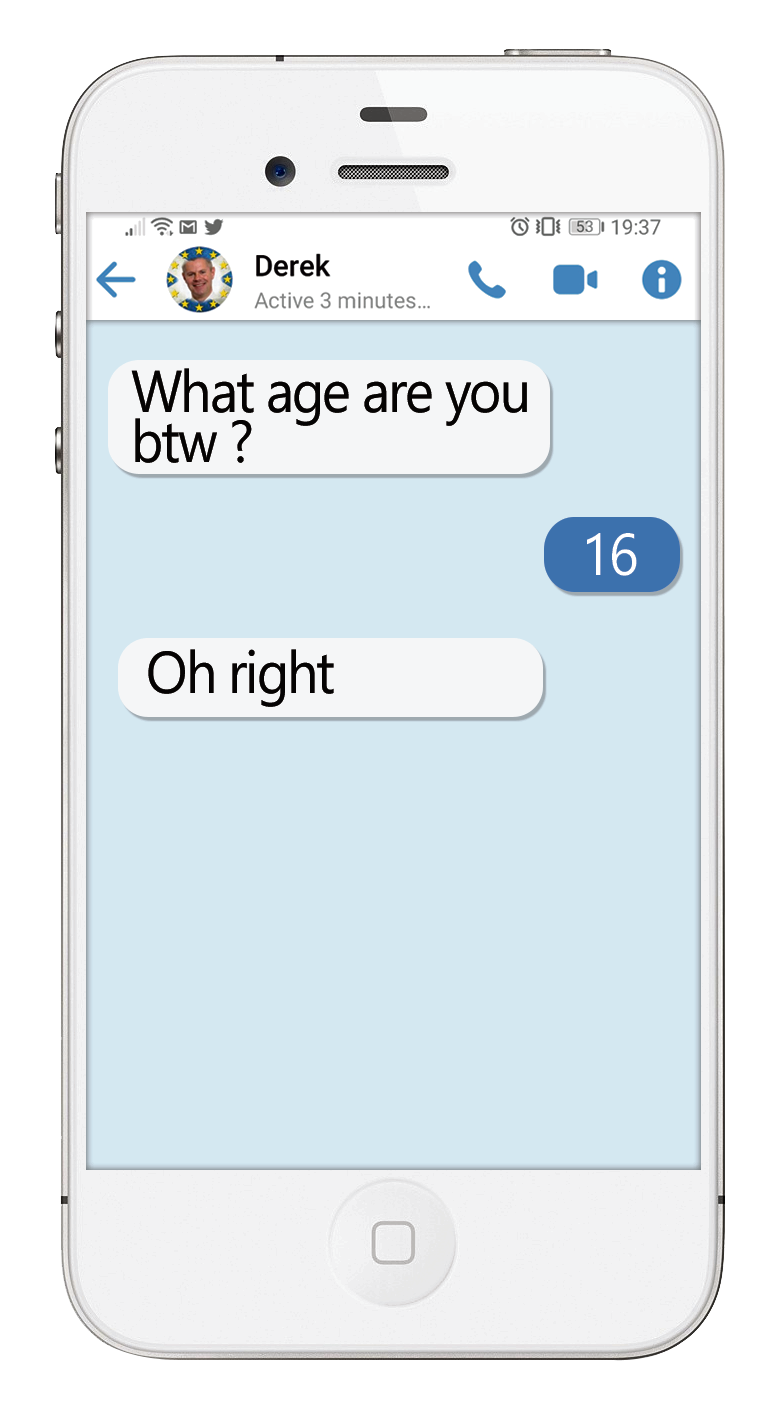 The Scottish Sun has seen full details of the conversations which began on Thursday, August 2, 2019, when Mr Mackay sent a ‘Hey’ note at 8.18am via Instagram.

The teenager told The Scottish Sun that before the unexpected social media contact, he had no idea who the politician was.

Mr Mackay, Renfrewshire North and West MSP, initially exchanged pleasantries with the lad on August 3 on Instagram where the politician told him it was “nice to chat”.

At the end of the conversation the boy asked: “Are you not a politician?” Mr Mackay replied: “Aye.”

Mr Mackay then attempted to engage him in conversation on nine occasions — switching from Instagram to Facebook — between August 8 and 30.

And on September 8 he tried to make contact again, this time asking the boy, whose profile contains rugby pics: “Do you follow scottish rugby nations.”

Messages show the boy is clear about his age, telling Mr Mackay in September he is 16 and at school.

The offer to take the boy to a rugby game came as he quizzed the youngster about the sport, saying: “You might have to explain the rules before I go.”

Mr Mackay posts back: “Is that an invite lol.” 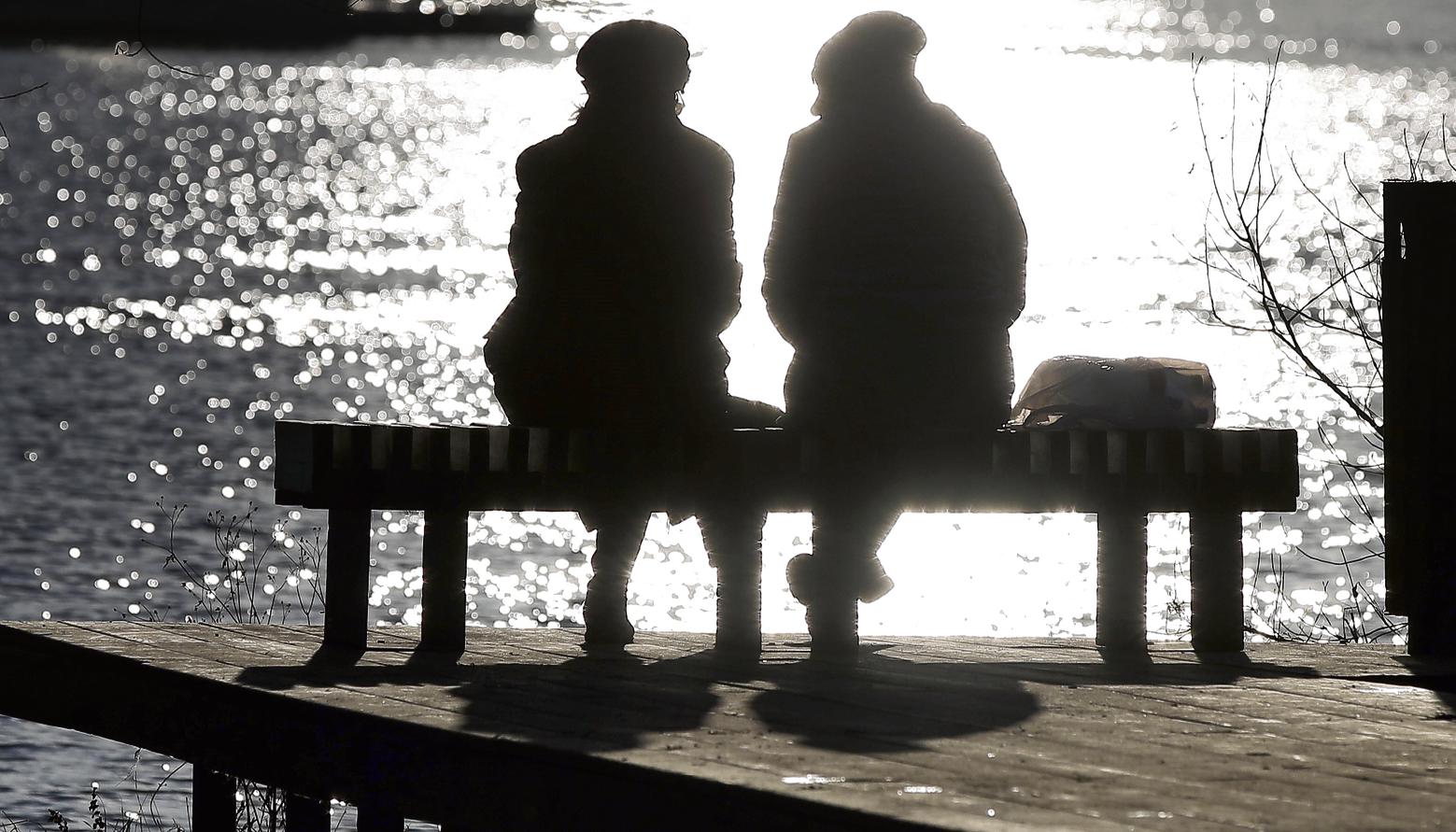 The teen dismisses the idea, saying: “Don’t have the money for that.”

But Mr Mackay then offers: “I could take you?” The boy then says he “wouldn’t mind that” and the MSP immediately asks: “What’s your mobile.”

Within minutes of receiving the number Mr Mackay is said to have sent a text to the youngster from his long-held mobile number, verified by The Scottish Sun. He later sent a separate text to the boy, which we have seen.

In a further chat in October Mr Mackay asks the lad to help him deliver campaign leaflets.

He tells Mr Mackay he would need to get home before 8pm to which the politician says: “Oh you will be finished long before then.

The MSP then sends a follow-up message, asking “Unless you wanted to stay for dinner lol.”

But the boy says that “My mum would get worried” and does not accept — or go to deliver leaflets — despite Mr Mackay appearing to put pressure on him.

Cool, then to be honest I think you are really cute.

The SNP big gun tells him: “I do finance and the economy.”

He then asks: “You are pro independence yeah?”

The boy replies: “Don’t really have an opinion tbh.”

On December 16, Mr Mackay gets in touch again and tells the lad he will be hosting a Scottish Rugby Union reception at Holyrood which he says was taking place on January 8.

He tells the boy: “I think I will do that rugby event.”

The lad replies: “Great to hear.” Mr Mackay adds: “And you can be my guest.”

Mr Mackay even took time out on Christmas Day to contact the boy, sending a string of messages including one just before midnight that said: “You still up.”

The minister continued to contact him over the festive period including a message which appears to have been sent when the MSP was at the gym.

And on December 27, he ramped up comments with the “cute” remarks.

Since then, the boy has not replied, despite receiving 12 messages from the Nat up until five days ago.

The lad says he accidentally posted a thumbs-up when scrolling through chats on January 31, but quickly deleted it.

The boy’s raging mum said: “Inside, I have always been afraid of what can happen on social media — but I never really thought something like this would happen to him.

“When I finally found out what was going on I was furious.

“A man like that is not supposed to say these sort of things to a boy — he looks like he wants something from my son. When I finally read the messages it was terrifying and made my stomach turn. My son’s friends, his girlfriend, can say he is cute — but not this strange man. 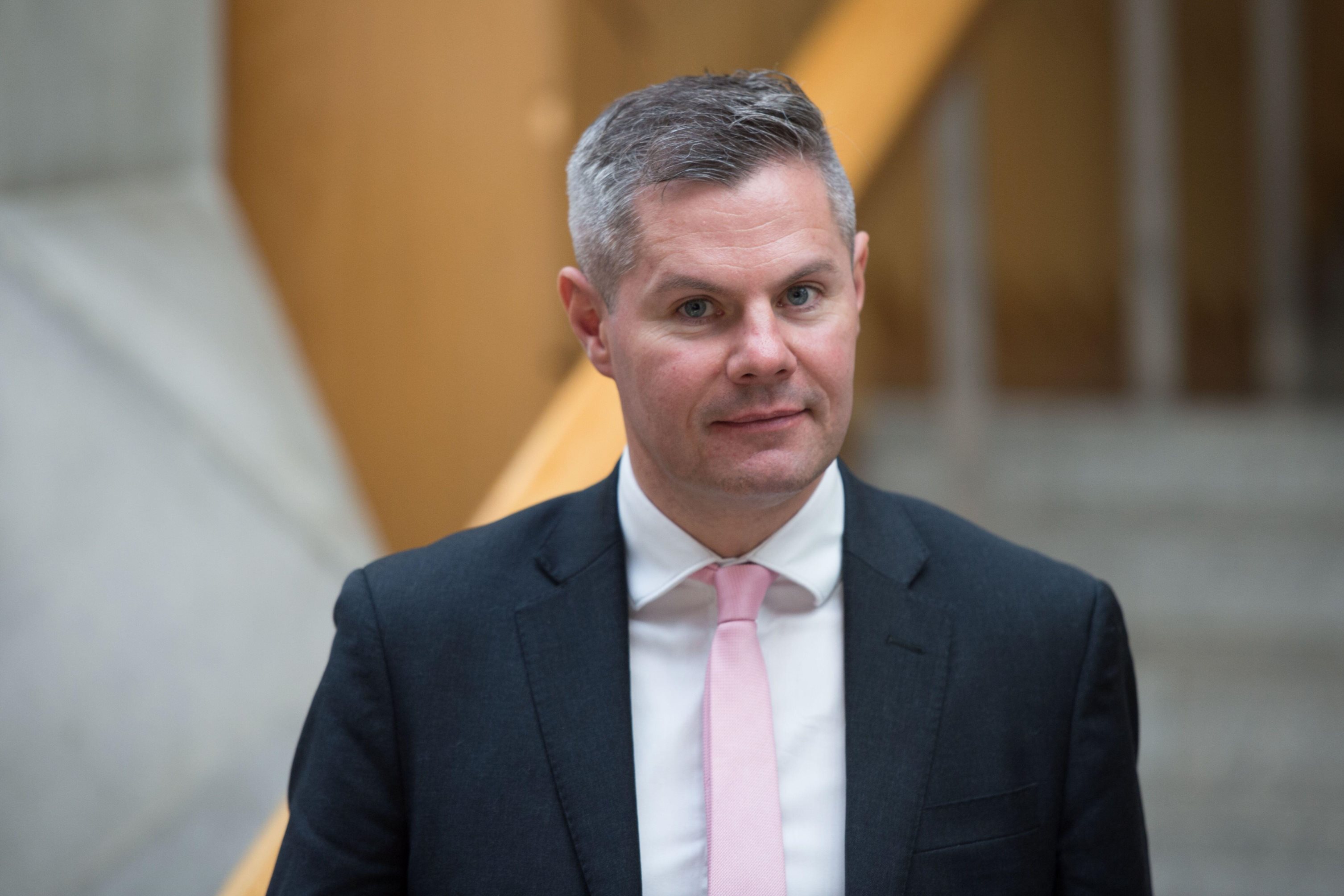 “When he asks my son if it’s OK to call him cute he was then waiting for an answer.

“He was looking for a positive response to see if he can take it further. But he didn’t get a reply and then he seems confused and worried about what he’s said.”

The mother told how the first she knew of the chats was when her son “mentioned a politician had invited him to a rugby reception at the parliament”.

She went on: “I just thought ‘that sounds good’ and assumed he’d be going with his friends and team-mates.

“I said it would be good to meet some important people because it could help you in the future.

“Every time he goes somewhere I have a chat with him because I want to protect him. But what can I do when someone contacts him on social media on Christmas Day?

“It’s very upsetting this was going on and I didn’t know anything about it.”

When asked what action she believes should be taken against Mr Mackay, the mum added: “Nicola Sturgeon should remove him from his position.

“I don’t know if he should lose his job but he should be dealt with very seriously. I hope he can take lessons from this situation and something must happen that forces him to think about what he’s done.”

The boy said: “He should be made to apologise, not just to me but to everyone else who has been let down by this. I think he should be sacked to be honest.”

Why Netflix Hasn't Peaked Yet – Despite Lackluster Subscriber Growth