‘The worst decision in the history of football’: Social media erupts with hilarious memes as fans mock farcical Raheem Sterling penalty for tripping over in Man City’s Champions League win

It’s been called the worst penalty decision ever – and footage of Raheem Sterling being tripped up by his own toe inside the box to win a spot kick last night has sparked a blizzard of amusing memes.

On goal with his Manchester City side 1-0 in their Champions League game against Shakhtar Donetsk, the winger pulled back his left leg to shoot, but instead of connecting with the ball hit his boot on the turf and tumbled to the ground.

Despite their being no defender near the England star, referee Viktor Kassai quickly concluded he had been hacked down and awarded a penalty. Sterling’s teammate Gabriel Jesus then slotted it to help City on their way to a 6-0 win. 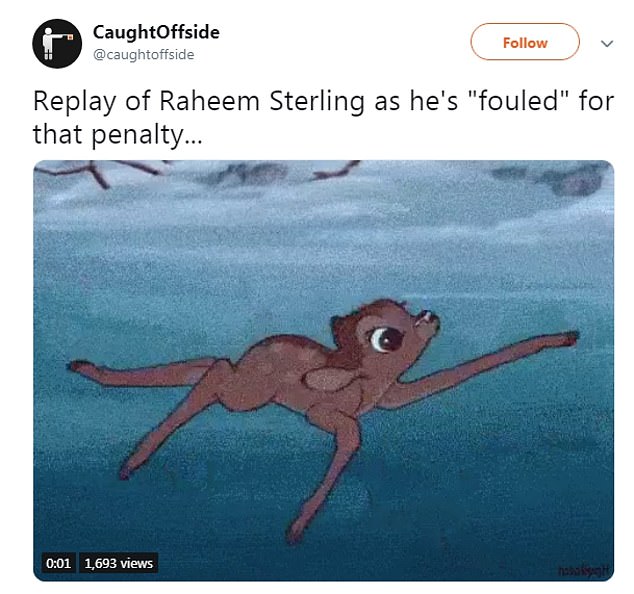 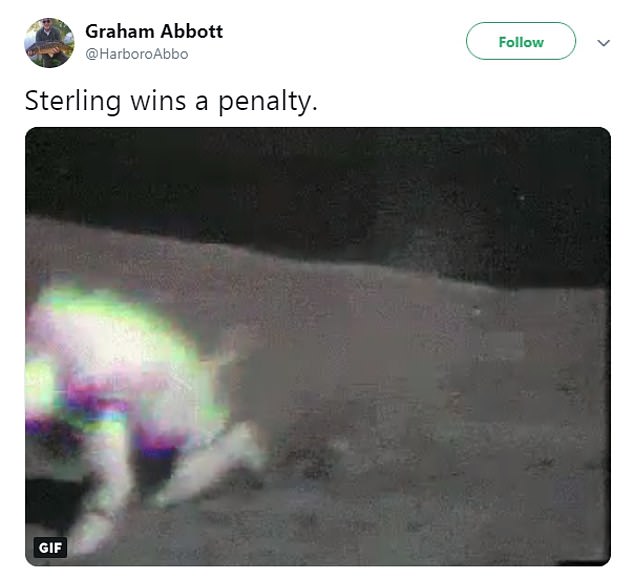 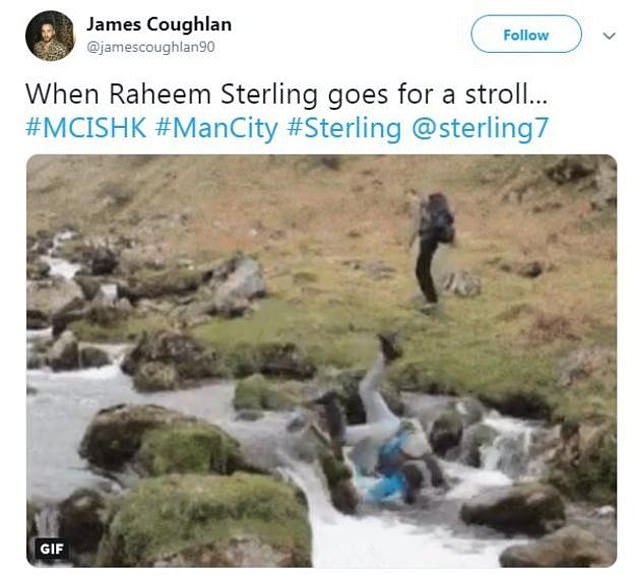 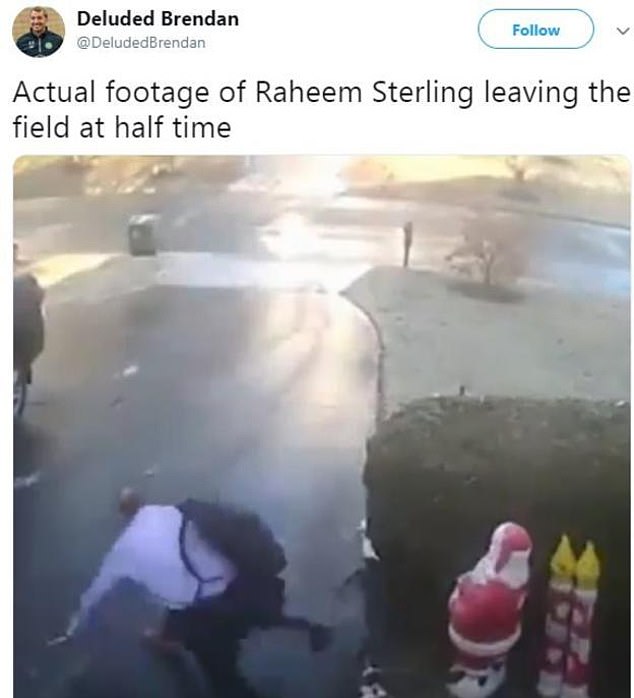 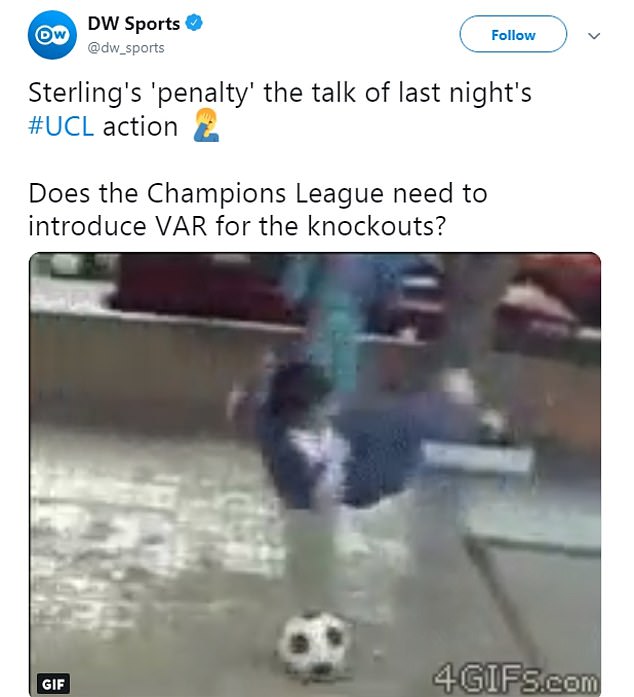 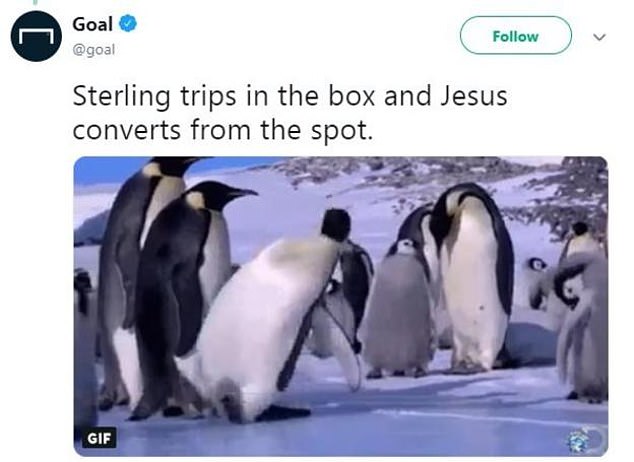 ‘I went to chip the ball and don’t know what happened,’ Sterling said after the game. ‘I didn’t feel contact. I scuffed the ball. Apologies to the ref.’

City boss Pep Guardiola claimed the 23-year-old might have owned up but claimed the fault lay with the lack of video technology rather than his player.

‘We realised immediately it wasn’t a penalty,’ Guardiola said. ‘He could do that (tell the referee), yeah. But last season Liverpool and James Milner could say the same for the pass for the second goal in the 44th minute of the quarter-final. That was a legal goal. VAR is what it is. I said a long time ago the refs must be helped.’

Social media users were quick to make fun of the incident by posting falling over memes – including a surprising number featuring penguins slipping over on ice.

There were plenty of puns, including one man who quipped on Twitter that the incident was ‘the worst Sterling fall since Brexit’.

Others were less jocular, slamming the referee for ‘one of the worst decisions ever in football’ and saying Sterling should have admitted to the referee that he had felt no contact. 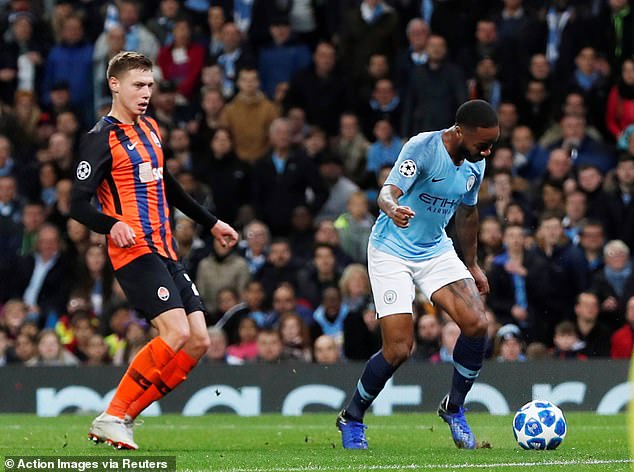 Raheem Sterling apologised to the referee after winning a ludicrous penalty yesterday, which sparked a blizzard of amusing memes on social media 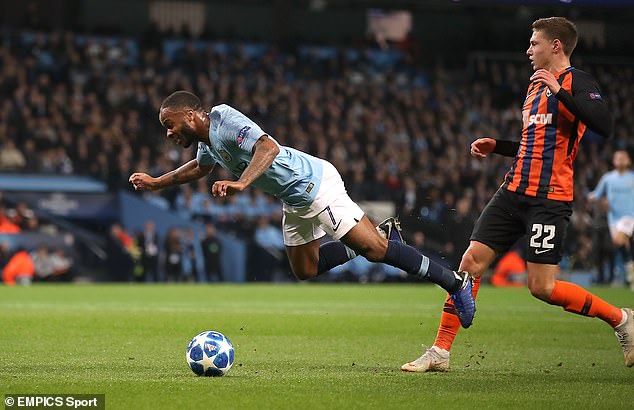 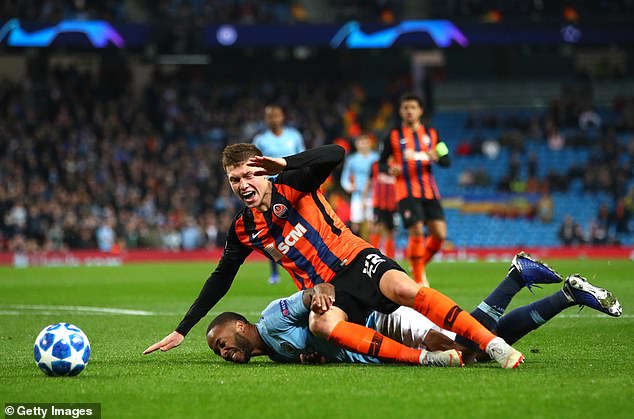 The ref nevertheless pointed to the spot, but Sterling admitted after there was ‘no contact’

Shakhtar manager Paulo Fonseca said: ‘It’s difficult to speak about the penalty after a result like this but it’s ridiculous. Everyone saw it. I told the referee it was ridiculous. But we didn’t lose the game because of that.’

City are almost through to the knockout stages and could seal that spot away at Lyon in three weeks’ time.

David Silva, Sterling and Riyad Mahrez all found the net, with Gabriel Jesus taking his season tally to five with a hat-trick.

‘It was a massive win,’ Sterling said. ‘The Lyon match (a 2-1 home defeat in September] was one of those a wake-up calls. You lose the ball and these good teams can punish you.’ 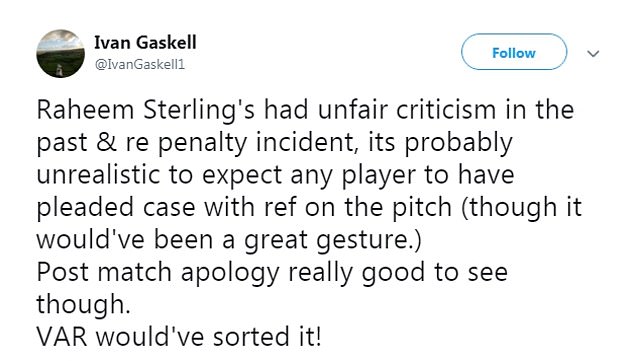 Others were less jocular, slamming the referee for ‘one of the worst decisions ever in football’ and saying Sterling should have admitted to the referee that he had felt no contact

Guardiola added: ‘I am a happy man. It was an incredible performance, the way we attacked and defended. Unfortunately we’re not qualified but we are so close. We want to maintain that level.’

Guardiola praised Jesus, who ended his barren run in front of goal with two penalties before a sublime late chip.

‘It’s important – the striker lives for goals,’ Guardiola said. ‘The quality of Gabriel is it doesn’t matter what happens, he always fights and when that happens you can’t have regrets.

‘At 2-1 he had another clear option. We need all the guys (to perform) all season because it is long.’

City have nine points in Group F, Lyon – who they face away next – have six, Hoffenheim have three and Shakhtar have two. 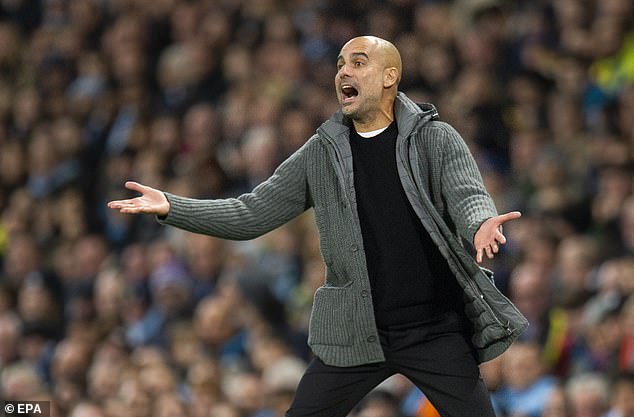 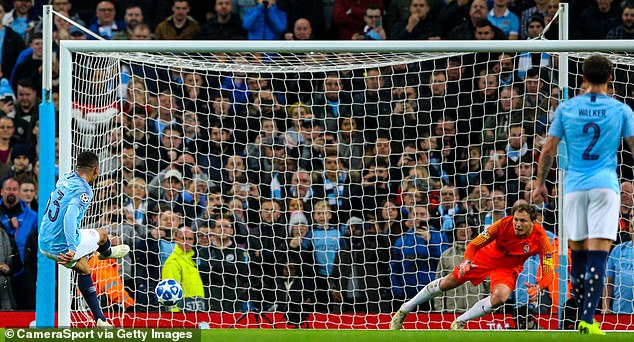 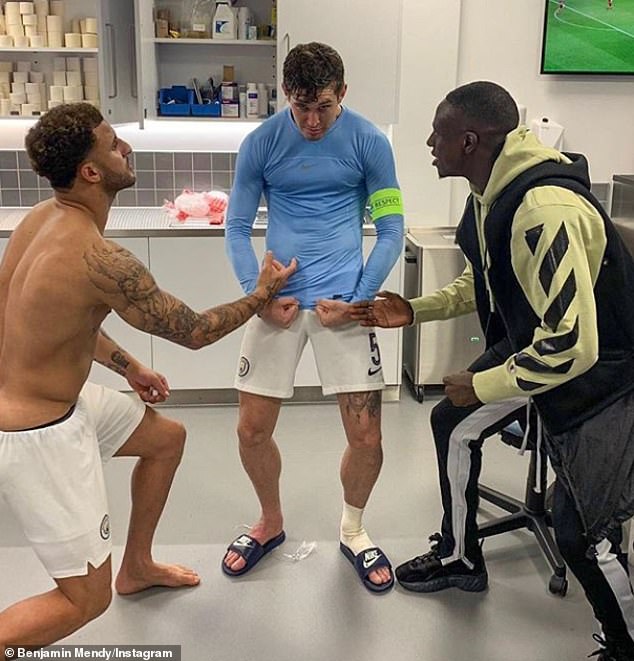