He’s over the Moon! South Korea’s President Moon Jae-in celebrates as he is told Parasite has won four Oscars during meeting with officials

Clapping as he is surrounded by top secretaries at a meeting in Seoul, the country’s capital, he heralded the victory as instilling ‘pride and courage’ in the nation.

Black comedy thriller Parasite, which tells the story of a poor family pretending to be unrelated and highly qualified individuals in order to get employed by a rich family, scooped the gongs for Best Picture, Best Director, Best Foreign Language Film and Best Original Screenplay. 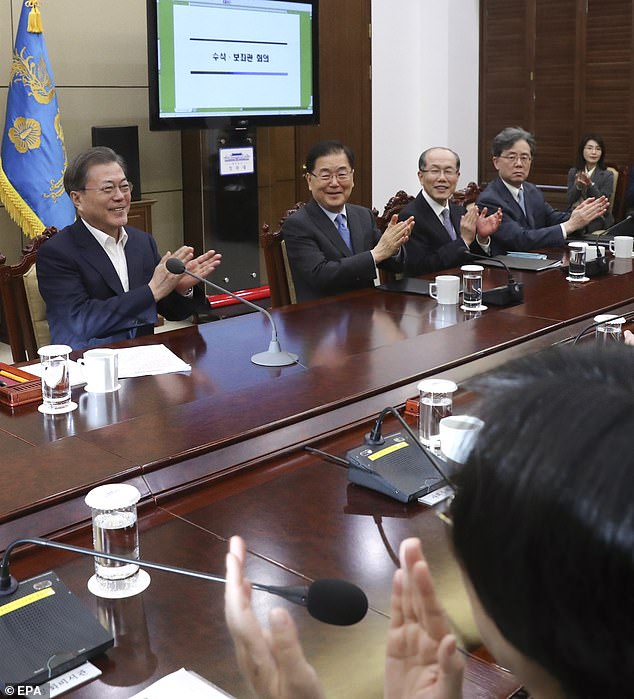 South Korea’s President Moon Jae-in smiles and claps at a meeting in Seoul, the country’s capital, as he heralds the film’s achievements as instilling ‘pride and courage’ in the nation 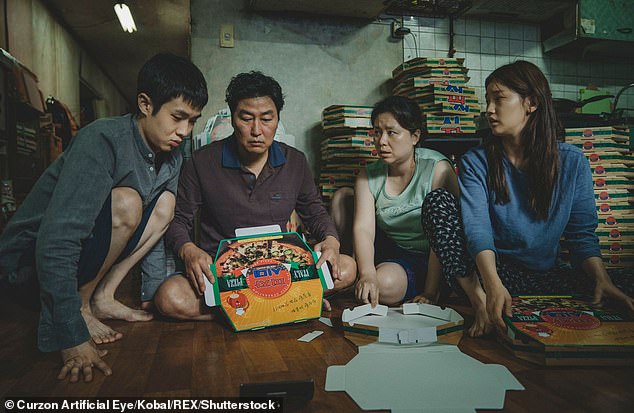 Speaking in Seoul, Mr Jae-in said the victory by the film’s cast and crew will help the people ‘come together to weather difficulties’.

‘I am very pleased to see a Korean film shoulder to shoulder with those of other countries,’ he added.

Director Bong Joon-ho’s film vaulted over what he once called the ‘one-inch tall barrier of subtitles’ to capture international attention like no previous South Korean movie.

But as the night continued, the film also came out on top of increasingly prestigious categories, including International Feature Film award, Best Director for Bong, and the top award, Best Picture. 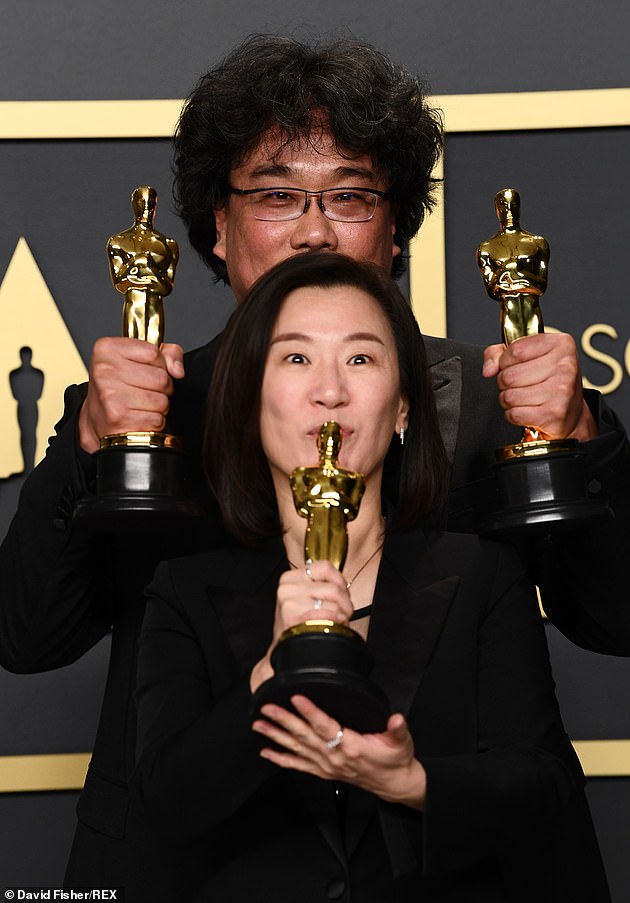 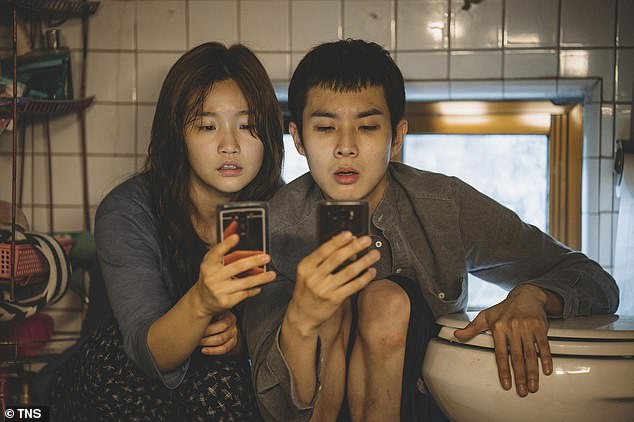 Critical hit: The film has been a critical hit since hitting theatres in November, with a whopping 99 per cent Rotten Tomatoes rating from 393 reviews

‘I’m ready to drink tonight,’ Bong joked, after thanking the cast and staff during his acceptance speech for the International Feature Film award.

A satirical take on the vast gap between the rich and poor in South Korea, the movie came as South Korea grapples with the divide between ‘dirt spoons’ – those born to low-income families who have all but given up on social mobility – and ‘gold spoons’, as those from better-off families are known.

Although South Korea’s film industry is one of the largest in the world, the Korean-language ‘Parasite’ made unprecedented waves in international markets.

Park family: The poor Kim family begin to infiltrate the lives of the Park family in the film, first as the children becoming tutors for their daughter, and later with the Kim matriarch and patriarch working for the Park’s as well 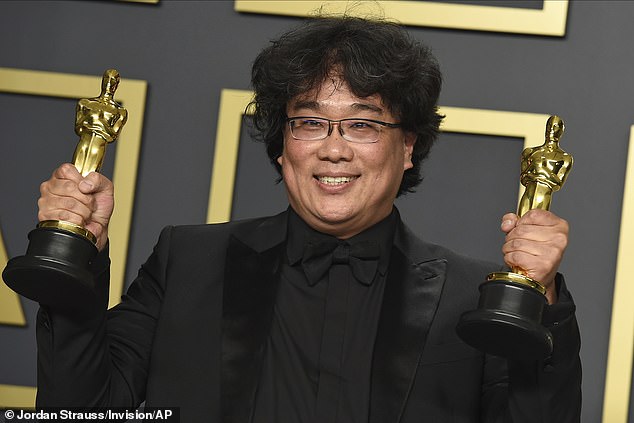 Rich house: ‘Because the story is about the poor family infiltrating and creeping into the rich house, it seems very obvious that Parasite refers to the poor family, and I think that’s why the marketing team was a little hesitant,’ Bong said in an interview

After the nominations were announced in January, Bong said he saw it as a sign that language is no longer a stumbling block for global success.

‘I was so proud as a Korean to hear that a South Korean film defeated so many famous foreign films,’ said Chung Su-yoon, a Seoul resident who watched ‘Parasite’ just two hours before the Oscars.

Pop culture critic Kim Hern-sik said the deeper messages of ‘Parasite’ allowed it to resonate with people around the world.

‘Just like BTS had a popular appeal by casting the problems the youth go through everywhere in the world, ‘Parasite’ gained global understanding by demonstrating the issue of the gap between the rich and poor,’ Kim said, referring to the K-pop group that has found wide success in the United States and around the world despite Korean-language lyrics.

One clip making the rounds on South Korean social media mocked a reporter who asked Bong why he shot the film in Korean.

‘She should’ve asked Scorsese or Tarantino why they shot their own movies in English,’ one commenter said, referencing other directors who were nominated. 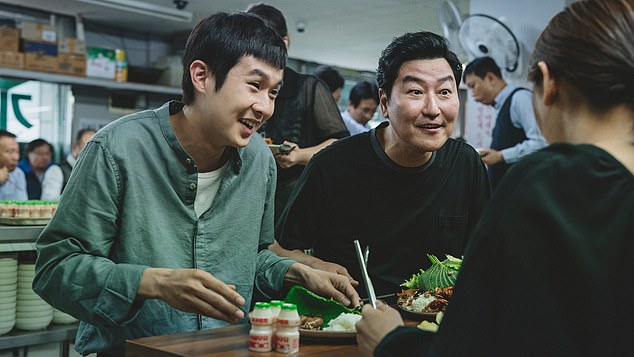 Latching on: The film shows how both families serve as ‘parasites’ in different ways, with the Park’s latching onto the Kim’s wealth and the Park’s exploiting the Kim’s for cheap labour 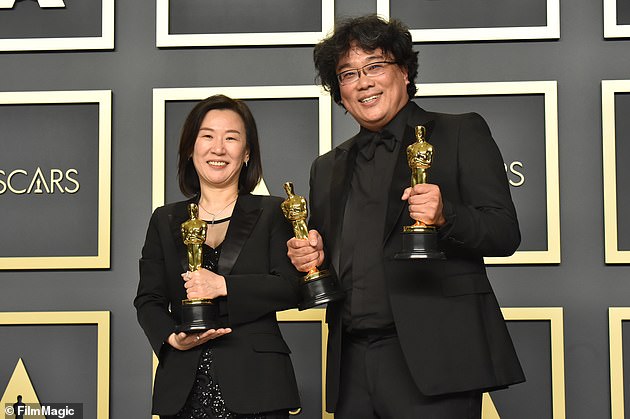 Own experience: The filmmaker largely found inspiration for Parasite in his own experiences in his 20s, when he worked as a tutor for a wealthy family

Another popular clip on South Korean social media was a slow-motion shot of the cast enjoying the night on the red carpet, cheering the stars and wishing them the best of luck.

U.S. Ambassador to South Korea Harry Harris tweeted, ‘we are doing a watch party at the embassy eating jjapaguri’, referring to the noodle dish the rich family enjoys in the movie.

The movie’s distributor, CJ ENM, said it was a ‘historic moment’ that will go down in Korean film history.

‘Over the past year, we have realised that the status of Korean films has dramatically increased thanks to ‘Parasite’,’ the company said in a statement.

Hashtags Parasite and Director Bong Joon Ho were the most trending on Twitter South Korea, while the movie name was the most searched on the local Naver web portal after the victories.

Some South Koreans called the win a ‘national celebration’.

‘Global audiences will watch the movie and say that ‘South Korea can also do it,’ said Kim Chan-dong, a pastor who watched ‘Parasite’ on its second day in theatres.

‘The movie frankly portrayed the story of people in hardships, arousing deep sympathy from people.’