"There's a special place in hell for any foreign leader that engages in bad faith diplomacy with President Donald J. Trump and then tries to stab him in the back on the way out the door," Trump trade adviser Peter Navarro said in an interview broadcast nationally broadcast in the US.

The verbal volleys by Navarro and Trump's top economic adviser, Larry Kudlow, picked up where Trump left off on Saturday evening with a series of tweets from Air Force One en route to Singapore for his nuclear summit Tuesday with North Korea's Kim Jong-un.

Just as the Trudeau-hosted G7 meeting of the world's leading industrialised nations had seemed to weather Trump's threats of a trade war, the US President backed out of the group's joint statement that Trudeau said all the leaders had come together to sign.

Trump called Trudeau "dishonest & weak" after Trudeau said at a news conference that Canada would retaliate for new US tariffs. 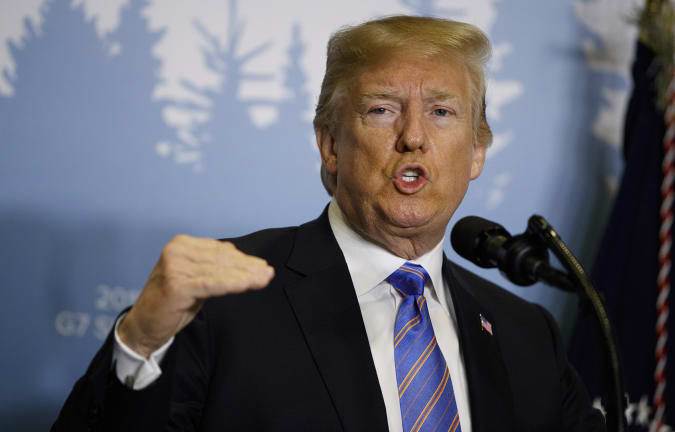 US President Donald Trump fanned the flames with Canada in a series of tweets following the G7 meeting in Quebec, refusing to sign the leaders’ communique.

Trudeau didn't respond to questions about Trump when the Prime Minister arrived at a Quebec City hotel on Sunday for meetings with other world leaders.

A Trudeau spokesman, Cameron Ahmad, said on Saturday night that Trudeau "said nothing he hasn't said before – both in public and in private conversations" with Trump.

And Roland Paris, a former foreign policy adviser to Trudeau, jabbed on Trump on Twitter: "Big tough guy once he's back on his airplane. Can't do it in person. … He's a pathetic little man-child."

Trudeau said he had reiterated to Trump, who left the G7 meeting before it ended, that tariffs would harm industries and workers on both sides of the US-Canada border. He told reporters that imposing retaliatory measures "is not something I relish doing" but that he wouldn't hesitate to do so because "I will always protect Canadian workers and Canadian interests."

Navarro, the Trump trade adviser, said his harsh assessment of what "bad faith" Trudeau did with "that stunt press conference" on Saturday "comes right from Air Force One."

He said Trump "did the courtesy to Justin Trudeau to travel up to Quebec for that summit. He had other things, bigger things, on his plate in Singapore. He did him a favour and he was even willing to sign that socialist communique. And what did Trudeau do as soon as the plane took off from Canadian air space? Trudeau stuck our president in the back. That will not stand." 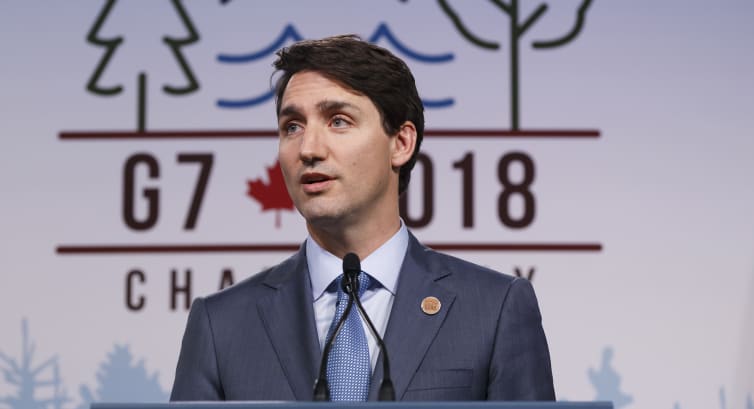 Kudlow, in a separate TV appearance, said Trudeau was "polarising" and "really kind of stabbed us in the back." The Canadian leader pulled a "sophomoric political stunt for domestic consumption," Kudlow said, that amounted to "a betrayal."

"Don't blame Trump. It was Trudeau who started blasting Trump after he left, after the deals had been made."

Trudeau had said Canadians "are polite, we're reasonable, but also we will not be pushed around."

He described all seven leaders coming together to sign the joint declaration despite having "some strong, firm conversations on trade, and specifically on American tariffs."

In the air by then, Trump tweeted: "Based on Justin's false statements at his news conference, and the fact that Canada is charging massive Tariffs to our U.S. farmers, workers and companies, I have instructed our U.S. Reps not to endorse the Communique as we look at Tariffs on automobiles flooding the U.S. Market!"

Before leaving for Singapore, Trump had delivered a stark warning to America's trading partners not to counter his decision to impose tariffs on steel and aluminium imports. The G7 also includes Britain, Italy, France, Germany and Japan.

"If they retaliate, they're making a mistake," Trump said.

Trump insisted relationships with allies were a "10" just before he left the summit.

At a rare solo news conference before heading to Asia, Trump said he pressed for the G7 countries to eliminate all tariffs, trade barriers and subsidies in their trading practices. He reiterated his longstanding view that the US has been taken advantage of in global trade, adding, "We're like the piggy bank that everybody's robbing, and that ends."

Proffee becomes the latest trend to take over