Local holidaymakers are treating West Australian tourism operators like trash, spending their JobSeeker and JobKeeper payments at resorts and caravan parks while expecting an experience more akin to a booze-filled Bali getaway.

Operators complain about being abused by tourists who leave rubbish, are loud and rude at night, refuse to abide by resort rules and treat staff like "dirt". And some believe it is the people enjoying their holidays courtesy of the taxpayer who are the worst-behaved. 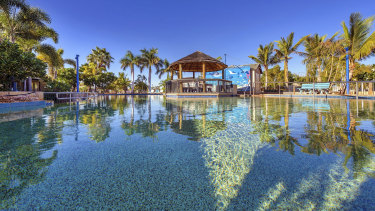 Ningaloo Caravan and Holiday Resort manager Ray Beven said he was seeing feral behaviour he had never experienced in his 11 years managing the park. He said the year had already been hectic due to the pandemic, and he’d had enough of dealing with horrible visitors at the usually peaceful resort.

"They treat people like a bit of dirt," he said.

"They just seem to think they can treat people like the Indonesians, which is a shame and you can’t discuss it with them.

"They just want to party all night; when people ask them to quieten down in the caravans they give them the finger up and are abusive."

He said people who said they didn’t have jobs and were travelling on government payments refused to work when he told them he had jobs available. They were mostly aged between 18 and 30, and families had to leave the resort due to their abusive acts.

"It’s a shame because we have got old people coming here for 25 years and they’re getting upset with people, particularly the way they leave the ablutions," he said.

"There is verbal abuse all the time."

Some refused to abide by park rules, such as staying out of the pool when it was closed at night, and reacted aggressively when asked to stop. Others demanded discounts, as if bartering in Bali.

Mr Beven said the only way he could deal with some groups was to threaten to call the police. Then some people left bad online reviews in revenge. 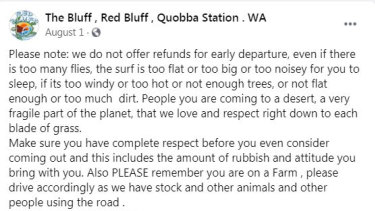 The owners of accommodation on pristine northern WA beaches say visitors have been demanding refunds for ridiculous reasons.Credit:Facebook

"You have just got to be careful because then they go to TripAdvisor and put nasty things on about you," Mr Beven said.

Giralia Station Stay owner Denver Blake said it was lovely having more people around, but many did not realise they were coming to the outback. His homestead is located "where the outback meets the coast" – about 100 kilometres from Coral Bay.

"I think a lot of people haven’t been past Wanneroo, and they come up here – where we think we have a fantastic backyard – and people who come here usually love it and appreciate it, but they’re leaving rubbish and being rude," he said.

"I think a lot of people are used to going to Bali and sitting in a 5 or 4-star hotel and being waited on."

Mr Blake said he found it sad that so many West Australians were treating people running tourism businesses poorly, when interstate and international travellers came to WA to appreciate the great outdoors and did not act the same way. 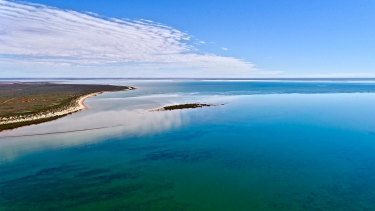 He called many of his recent visitors "slobs".

"They like to sit in a hotel; they’re not adventurers. They’re the sort of people who would never come up here."

Mr Blake recently had to ask a group of 16 people to leave because they were abusing others.

"Their language was unacceptable," he said.

"It was alcohol-related. I don't think I've ever had to ask anyone to leave our campsite since we opened."

The owners of Quobba Station at Red Bluff, at the far southern end of Ningaloo Reef, raised similar issues on social media.

They offer accommodation on the pristine beaches, ranging from basic camp sites to luxury eco safari tents that run on solar power and rainwater tanks.

The post listed ridiculous reasons why visitors had complained about their stay and demanded refunds, and warned: "Make sure you have complete respect before you even consider coming out, and this includes the amount of rubbish and attitude you bring with you."

"Please note: we do not offer refunds for early departure, even if there is too many flies, the surf is too flat or too big or too noisey [sic] for you to sleep, if its too windy or too hot or not enough trees, or not flat enough or too much dirt," they wrote.

"People you are coming to a desert, a very fragile part of the planet, that we love and respect right down to each blade of grass."

The post also called out people who drove too fast on their farm and treated others with disrespect.

WA Tourism Council boss Evan Hall said travellers needed to realise regional WA was remote, which was what made the sparsely populated areas so special. But it also meant visitors were not going to get 'major destination' experiences.

"You are not going to get your choice of 15 different places to eat in town, with teams of staff ready to bring a cocktail to your door," he said. 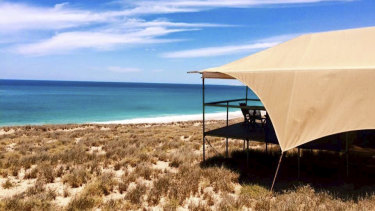 Mr Hall said less-developed countries with "appalling low wages" could provide cheap hospitality to western tourists, but this was not the case in WA.

"We are calling for our WA guests to be considerate and respectful for business owners and staff who are trying to give the best service they can," he said.

"There was three months where these people thought they were going to go bust. Then a month later it’s, ‘Why can’t you speed up the service?’”

Mr Hall said operators ran out of supplies. They had to ditch beer as it went off and the backpackers left. Suddenly, only two or three months later, they were inundated.

"The operators are getting tired," he said.

"There are only so many days you can work straight, without staff. A little bit of patience will go a long way with everybody. Check your expectations."

Roblox Is Finally Back Online; CEO Blames ‘Several Factors’ and Apologizes for Delay in Restoring Service