As the temperature climbed past 30 degrees on Sunday and the sun beat down on the crowd, Trung Truong kept his cool.

Over four hours of the St Albans Lunar New Year Festival, he played bass in a string of bands – segueing from jazz to Latin, traditional Vietnamese and western pop numbers. 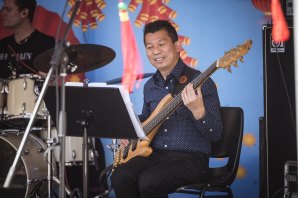 The COVID-19 pandemic is not over, but for Mr Truong, who is a local businessman, and for tens of thousands of other attendees, the festival offered a much-needed taste of normal life.

The 12-hour St Albans event, for which Alfrieda Street is blocked off, went solely online last year due to pandemic restrictions.

But with rules on gatherings lifting recently, Mr Truong, 54, was in a committee of volunteers who managed to organise the festival in six weeks instead of the usual six months. 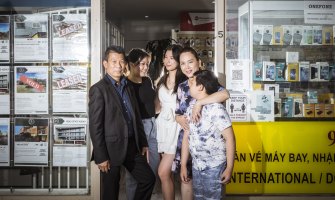 Immigrant success story: Trung Truong outside his phone, travel and real estate shop with his wife Trang and their children Christine, Vivian and Johnathan.Credit:Chris Hopkins

There were dragon and lion dances, traditional Vietnamese music and dancing, fireworks and carnival rides, and restaurants and cafes were doing a roaring trade.

Du Huynh, of the Fresh Chilli Deli, said they were on track to sell almost 1000 banh mis (Vietnamese baguettes), about 50 per cent more than on a normal day.

Nga Nguyen, 34, drove 50 kilometres from Springvale with a friend and six children, including her twins Giselle and Zoe, 2, because other Lunar New Year festivals had been cancelled.

Ms Nguyen, a Vietnamese refugee born in Hong Kong, wanted to share the Vietnamese culture with her children, who were otherwise growing up in a Western culture. 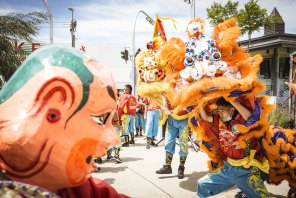 Mr Truong, the bass player, said the festival was a good way to remind himself and younger generations of their culture.

It brought the community together and would help businesses recover after a gruelling two years of pandemic restrictions.

His travel business, mostly arranging trips to Vietnam, was “completely dead” during the pandemic.
Revenue for his real estate and phone repair and accessory businesses dropped by 50 per cent.

Mr Truong’s is an immigrant success story. His family were left destitute after his father, police commander Thanh Truong, was arrested by the communist Viet Cong in Saigon in 1975, when Trung was seven years old. 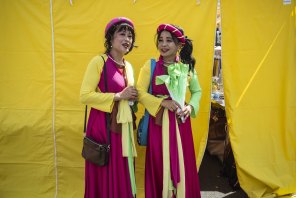 Nothing was heard from Thanh until he returned to his family in 1989, 14 years later. Trung Truong, his parents and three siblings all soon emigrated to Australia, joining another brother and uncle, who had come to Australia by refugee boat in 1984.

The family have lived in St Albans since 1994.

Mr Truong who is married to Trang Nguyen, said in Australia he could study, run a business, have a house and the future was brighter for his kids, Christine, 19, Vivian, 15, and Johnathan, 11.

Festival co-manager Gemma Loyer said even a few months ago, it was uncertain whether the event would go ahead.

She said the fact that the organisers had got there was “a testament to the passion that people have for this community”.

Get Your First Look at Uzo Aduba in HBO's 'In Treatment'