Student loan interest rate to more than DOUBLE from 4.5% to 12% in England and Wales: Financial watchdog IFS slams ‘no good reason’ for ‘eye-watering’ hike facing graduates amid cost-of-living crisis

Graduates in England and Wales will be paying up to 12% interest on their student loan repayments later this year, according to the Institute for Fiscal Studies.

The financial watchdog said the rate will more than double from the current 4.5% as it said there was ‘no good reason’ for the ‘eye-watering’ hike amid the cost of living crisis.

The IFS predicted this year will be a ‘rollercoaster ride’ for graduates who took out their student loans since 2012.

The new rates would mean students are charged higher rates of interest on their loans than homeowners paying off mortgages.

The Institute for Fiscal Studies (IFS) has calculated that because of current retail prices index (RPI) inflation rates, the maximum interest rate on loans – paid by those earning £49,130 or more – will rise from current rates of 4.5% to 12% for half a year.

Interest rates for low earners are set to rise from 1.5% to 9%, the IFS said.

They added that this means a high-earning recent graduate with a typical loan balance of £50,000 would incur £3,000 in interest over six months, a higher amount than a graduate earning three times the median salary for recent graduates would usually pay.

The IFS said that the maximum student loan rate was then set to fall to around 7% in March 2023, fluctuating between 7% and 9% for a year and a half. 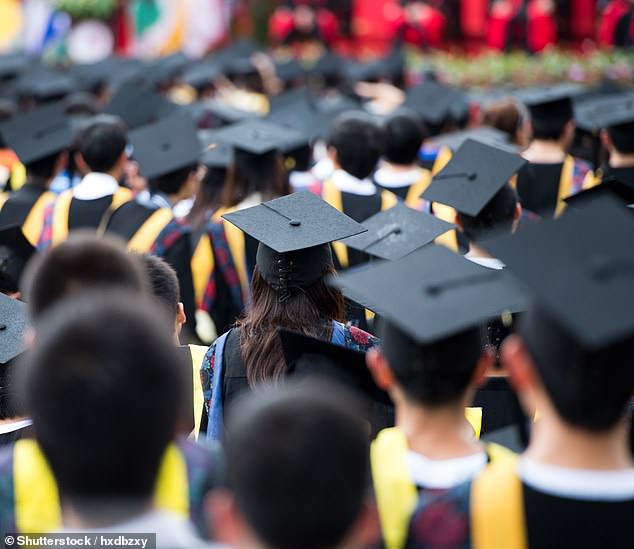 Graduates in England and Wales will be paying up to 12% interest on their student loan repayments later this year, according to the Institute for Fiscal Studies

‘These wild swings in interest rates will arise from the combination of high inflation and an interest rate cap that takes half a year to come into operation.’

They said that the ‘interest rate rollercoaster’ would cause problems, as the interest rate cap disadvantages students with falling debt balances.

It could also put students off going to university, or push graduates to pay off loans when this would have no financial benefit for them.

The ‘eye-watering’ rises are linked to the Retail Price Index and a rise in the cost of living.

‘This high reading implies an eye-watering increase in student loan interest rates to between 9% and 12%,’ the IFS said.

‘That is not only vastly more than average mortgage rates, but also more than many types of unsecured credit. Student loan borrowers might legitimately ask why the Government is charging them higher interest rates than private lenders are offering,’ they added. 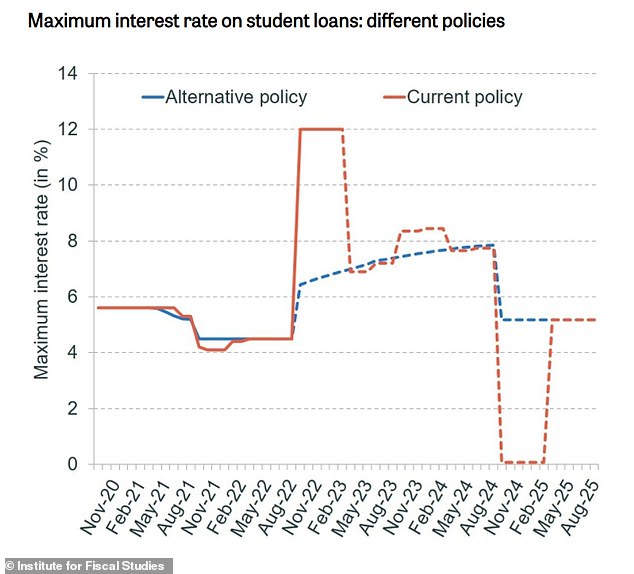 The situation is likely to disadvantage higher-earning graduates. Borrowers whose debt is falling over time will be charged more than those whose debts are rising.

The IFS said this would lead to ‘unfortunate redistribution’ between graduates.

Ben Waltmann, senior research economist at the IFS, said: ‘Unless the Government changes the way student loan interest is determined, there will be wild swings in the interest rate over the next three years.’

‘There is no good economic reason for this. Interest rates on student loans should be low and stable, reflecting the Government’s own cost of borrowing.

‘The Government urgently needs to adjust the way the interest rate cap operates to avoid a significant spike in September.’

Google bans another dangerous Android app – if you’ve downloaded it, delete it now!

Men, this is how you can make women feel safer now clocks have gone back