Students have demanded a university change its name because of its anti-Semitic links.

Campaigners have launched a petition to change the name of Leicester’s De Montfort University, named in honour of the 13th century Knight and Earl, Simon de Montfort.

De Montfort was the 6th Earl of Leicester and hailed as the founder of Parliament, but as a fanatical Christian, he expelled Jews from Britain and encouraged the massacres of Jewish communities.

The student union said their institution ‘should not be promoting the name’, adding: ‘This is not a name we say with pride. It is not reflective of our core values and beliefs.’

The university joins a chorus of other establishments seeking to eradicate local ties and references to Britain’s colonial past.

The move has sparked fevered debate online, with some slamming what they call, ‘Virtue signalling nonsense’, and others hailing the ‘inclusive initiative.’ 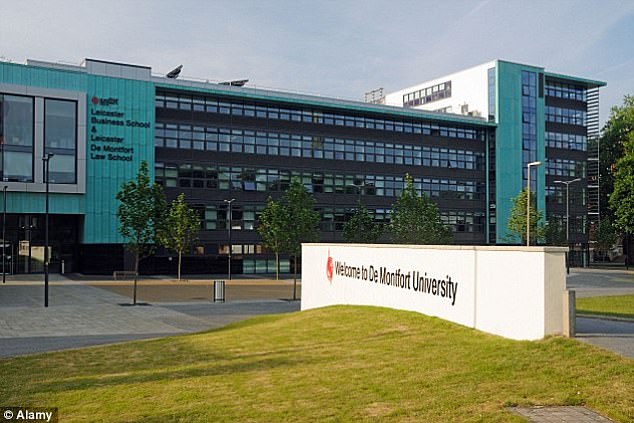 Campaigners have launched a petition to change the name of Leicester’s De Montfort University, named in honour of the 13th century Knight and Earl 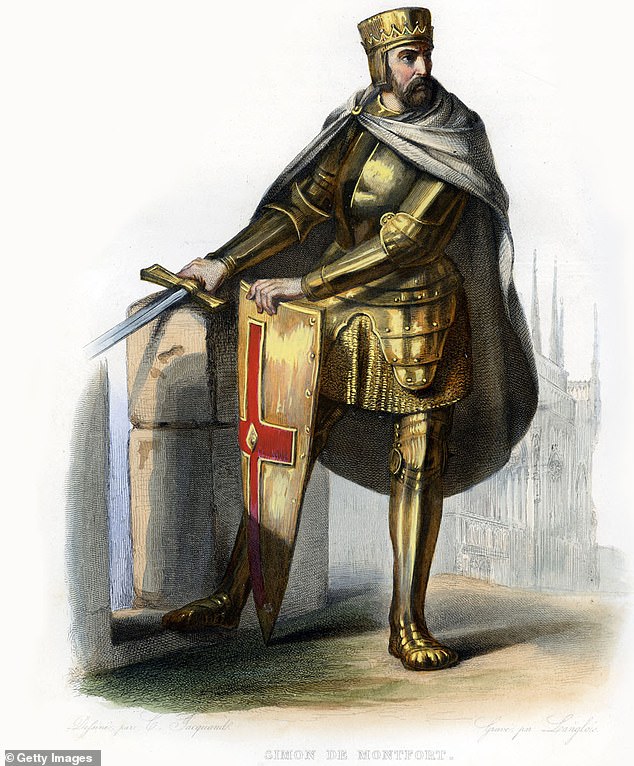 Simon de Montfort, earl of Leicester, was a French noble who came to England in the 1230s

Britons erase their past: The ‘racist’ road names and controversial plaques torn down and renamed

The move to rename De Montfort University comes after the statue of slave trader Edward Colston was pushed into Bristol Harbour in June, sparking a wider debate about the historical links to institutions around the country.

The bronze memorial to the 17th century slave merchant was pulled down during a Black Lives Matter protest on June 7, amid growing tensions about Britain’s colonial past, sparked by global outcry following the death of George Floyd who died in police custody in Minnesota on May 25.

Campaigners linked to the anti-racism movement have since called for 92 statues, roads or other monuments which they deem racist to be toppled – with a full list being compiled on the website www.toppletheracists.org.

A number of schools and buildings named after Colston subsequently launched consultations to be renamed.

Paint was thrown at a statue of Admiral Lord Nelson at Deptford Town Hall in South East London, while the gravestone of music hall singer GH Elliott who sang in blackface was covered up in Rottingdean, East Sussex.

Elsewhere, National Trust bosses said they will review a statue of a kneeling African figure clad in leaves carrying the sundial above his head which stands in front of Dunham Massey Hall in Altrincham, Greater Manchester.

And in South Wales, a plaque honouring the memory of 17th century slave trader Captain Thomas Phillips in Brecon was torn down.

Activists forced the removal of 18th Century slave dealer Robert Milligan from outside the Museum of London in West India Quay, Docklands in June.

More than 130 councils have announced plans to review monuments in their authorities for ‘appropriateness’, and London Mayor Sadiq Khan said he would conduct his own review into statues and street names in the capital.

Mayor Anderson also announced that Liverpool Council will proceed with plans to fix signs describing Liverpool’s role in slavery to roads named after slave owners. Roads that could be included are Rodney Street, Parr Street and Earle Street in the city centre.

In September, Governors at Sir John Cass’s Foundation Primary School said its name was ‘incompatible’ with the school’s values. It will now become The Aldgate School.

And in September hundreds of people signed a petition calling for James Gillespie’s High School in Edinburgh to be renamed.  Born in 1726, James Gillespie was a wealthy tobacco merchant in 18th-century Edinburgh and was one of the richest men in the Capital.

The former Leicester Polytechnic renamed itself in de Montfort’s honour in 1992.

The university’s student union says it wants to break the link with de Montfort because of his anti-Semitic views and actions which led to violent persecution of Jewish people.

In a statement, the De Montfort Student Union (DSU) said: ‘This ultimately led to the expulsion of the entire community from Leicester and the massacre of hundreds of Jews across the country.

‘His is not a name we believe anyone within our community would want to be associated with; and after conversations with key stakeholders we are confident that the campaign we are pursuing is the correct one.

‘De Montfort is not a name we should be promoting.

‘This is not a name we say with pride.

‘It is not reflective of our core values and beliefs.

‘Therefore, as of this moment, your Executive Officer team of 20/21 are formally launching a campaign to change the name of De Montfort University.’

But it has led to a backlash online.

‘Where was this outrage when the rowing team was found to be doing ‘blackface’?

‘Are only certain minorities worth defending? [sic]’

Another added: ‘I think if the name is changed, which is entirely understandable, its vital to ensure a proper consultation with students from various groups to ensure the new name is both free of this issues, and still has it’s own distinctive identity.’

‘The initiative is really beneficial for how our university sees itself, and to promote a further increase of inclusivity.’

This comes after the statue of slave trader Edward Colston was pushed into a river in Bristol in June, sparking a wider debate about the historical links to institutions around the country.

The De Montfort statement adds: ‘The changing of the university’s name has been spoken about in whispers by students, staff and the local community for years and it’s time we bring it to the forefront.

‘This should not just be a virtue signalling act.

‘Alongside the change of the name, we want to ensure that the university actively begins to start dismantling any signs of antisemitism within the institution.

‘In June this year, DMU committed to critique and challenge themselves to prove to the student community that they will change and become a truly anti-racist university.

‘It is now time to show us. Show us that they are passionate about becoming the best university they, and we, can possibly be – one that truly embraces equality and diversity.

We ask that the university pledges to start the work that will ultimately lead to changing the name by December 2023.’

A DMU spokesman said: ‘As an educational and research institution, we welcome honest and critical debate and accept that this will involve difficult discussions around historical figures such as Simon de Montfort.

‘We very much welcome the discussion the De Montfort Students’ Union campaign will bring and are very happy to work alongside our students to ensure the future of our university is fit for us all.’ 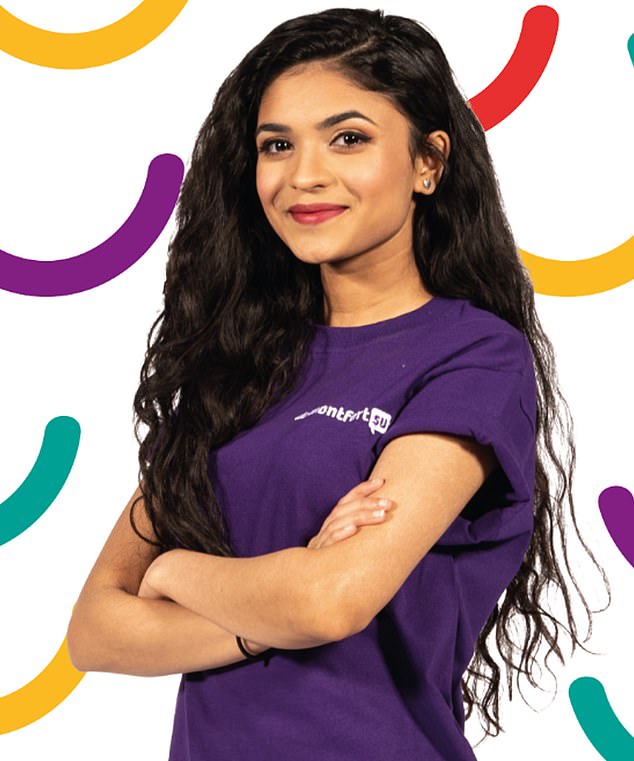 Aisha Ismail, student opportunities and engagement executive (pictured), said: ‘[De Montfort] is not a name which is reflective of our core values and beliefs’

Simon de Montfort, earl of Leicester, was a French noble who came to England in the 1230s and received lands from King Henry III who was around the same age.

He controversially married the king’s sister at a time when marriages of the aristocracy were strictly controlled by the king.

Henry III however, accepted the marriage and Simon became one of King Henry’s main advisers.

Simon De Montfort’s Parliament was the first instance of a parliament in which representatives from towns and the shires were summoned together to discuss matters of national concern.

This Parliament is seen as the earliest forerunner of the modern Parliament because of its inclusion of both knights and burgesses, for a reason other than the granting of taxation.

This broadened the types of people represented at a high level who were participating in affairs of the nation.

The second of these took place at Westminster between January and March 1265, and was the first parliament at which representatives of the cities and boroughs were present alongside knights representing their counties to discuss matters of national concern as opposed to granting taxation.

But he was seen by many as an inflexible fanatic, or self-interested opportunist.

He was unpopular among the barons, and this may have been part of the reason he struggled to gain support.

He came to power by force and used his position to enrich his family and followers, to the point where he alienated his key ally, Gilbert de Clare, the new earl of Gloucester.

Montfort was a populist leader who presented himself as the defender of ‘England for the English’.

He also pursued policies against the Jewish money-lenders, cancelling debts to many minor landowners who were suffering from excessive borrowing.

Many of the intellectual circle with which Montfort was involved were advocating new ideas about Christian piety that involved intolerance towards Jewish communities, and which resulted in the 1270s in the expulsion of all the Jews in England.

Montfort’s regime eventually fell on 4 August 1265 when he was defeated and killed at the Battle of Evesham by a royalist army led by the king’s son Edward.

Why Charlize Theron Thinks Marvel Fans Will Like Bombshell

Brad Pitt and Jennifer Aniston should never get back together. Here’s why