A super-rare white blackbird has been spotted at Waitrose in Dorset, with experts warning that its appearance makes it stand out to predators.

David Boag – an author of 18 books – was looking for blackbirds on January 20 when he stumbled upon the rare creature in the supermarket’s car park in Wimborne Minster, Dorset.

White blackbirds often live short lives because the white skin makes them susceptible to being killed by predators. 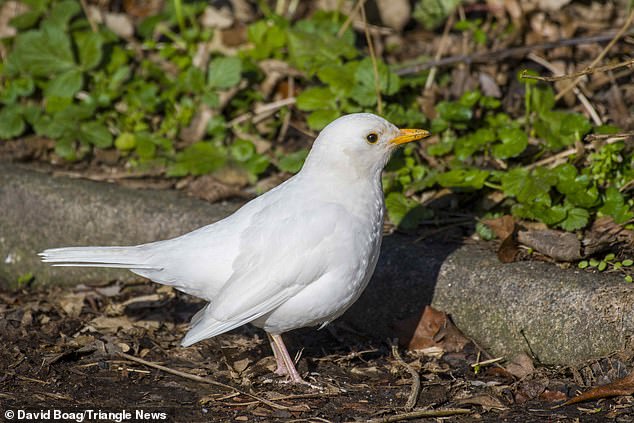 Pictured: The white blackbird in Minster, Dorset, which is more vulnerable to predators due to its colourless feathers 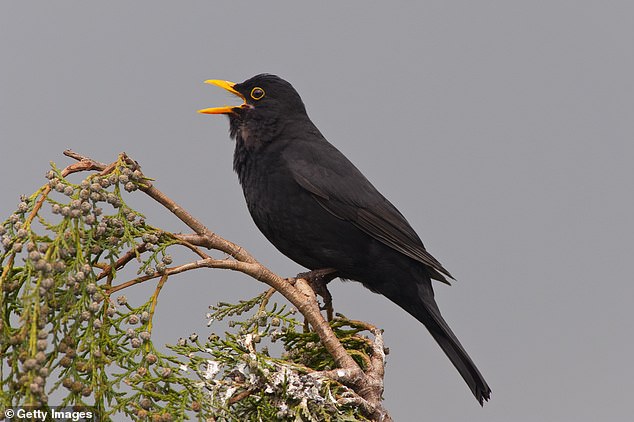 A common male blackbird, featuring the more traditional colours, is shown singing on a hedge

The photographed bird has a rare condition called leucism meaning it has a genetic mutation which prevents colour from being deposited on its feathers.

It is not the first time a bird like this has been spotted in the UK and experts say they are becoming more common.

After spotting the white featured bird, David said: ‘Blackbirds often have odd white feathers or patches of white, but a pure white bird is very rare.’

AN RSPB spokeswoman, Becca Smith, said: ‘Leucism is interesting because it can either affect a bird’s plumage either partially or completely as the case seems to be here.

‘Leucistic birds are certainly a good spot and do appear to be showing up on our doorsteps more often in recent years, which could be all the more reason for the public to look out for them during their Big Garden Birdwatch this coming weekend.’

It comes after last month a dog walker was left bamboozled this festive season after he captured footage of a rare Albino Pheasant strolling around a British garden.

The bird was brazenly looking round the woodland area while Brian Cave was taking his dog for a walk in Newquay, Cornwall.

Video footage captured by the 52-year-old shows the unusual bird strolling around on Christmas Day. 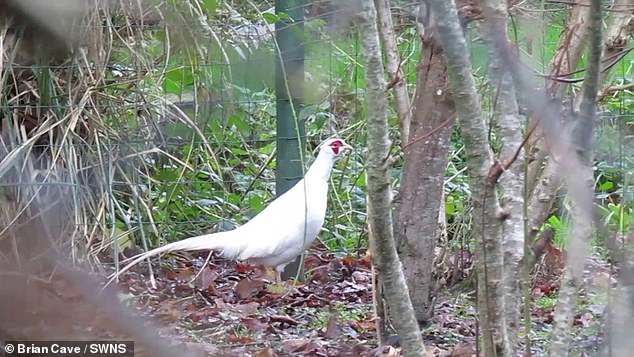 Brian Cave, 52, was taking his pet dog, Blaze, for a walk just before Christmas when he saw the unusual bird (pictured above)

The bird was identified as an Albino Pheasant, which are a rare species, with female pheasants usually being pale brown with dark mottling.

Male pheasants are much larger and usually have a dark green head and neck with a chestnut body.

The British Trust for Ornithology have now said the sighting was extremely rare, but that sadly, many Albino birds don’t make it to adulthood.

It is thought that they are a prime target for hunters due to their colour, but the registered charity said most ‘die soon after fledging, primarily as a consequence of their poor eyesight, and albino birds are not thought to progress to adulthood in the wild’.

What is Leucism and which animals does the condition affect?

Leucism is an abnormal condition that affects animals including birds, mammals, reptiles and fish.

It is caused by a genetic mutation that inhibits melanin and other pigments – substances that give an animal its colour. This gives them white or patchily coloured skin, hair, or feathers. 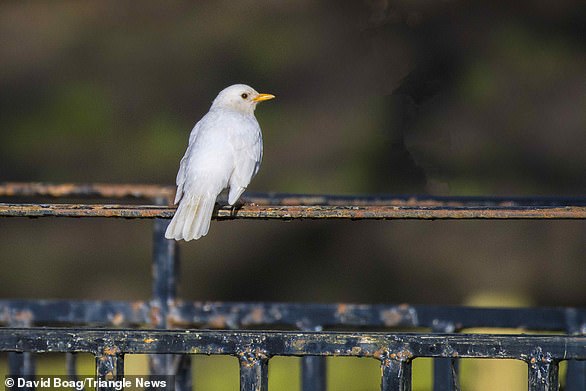 The condition is actually different from albinism, which is a absence of any pigmentation, including in the eyes and feet.

Vertebrates with albinism are not only white in colour but also have very pale eyes, often pink or red – this is the easiest way of distinguishing between leucism and albinism.

Tom Brady and Gisele Bundchen: A Timeline of Their Relationship

Cut it out. Meghan Markle tackles trends her way