Commissioners in Surfside, Florida, have rejected a proposal to trade public beachfront to the eventual buyer of the condominium collapse site so that a memorial to the 98 victims could be built there.

The decision followed an emotional meeting Tuesday as family members of those who died in the June 24 collapse of the Champlain Towers South and town residents packed the commission chambers, the Miami Herald reported. They had to set up an overflow room to accommodate the crowd.

After about an hour of public comment, commissioners told the victims’ families that they wouldn’t consider a proposal to tear down Surfside’s community center and build a new one, along with a memorial, at the collapse site. They also said they would not put such a land swap before voters in a referendum.

“My heart breaks for you because I know this is something that you were getting your hopes up about,” Mayor Charles Burkett, who was the lone supporter of the proposal, said. “I hope you will not give up hope.”

Commissioners Salzhauer and Nelly Velasquez had appealed to opponents of the idea to speak up.

“This is the moment we come together as a community to defend our community center and all town-owned properties,” Velasquez wrote on social media. Salzhauer wrote separately that the town “will NOT allow this tragedy to be exploited for profit and become the undoing or Surfside’s priceless community center and our residents’ quality of life.”

Deliberations were interrupted at times by upset family members, the newspaper reported. One man yelled “Let the people vote!” A woman pressed Salzhauer on her recent comments, saying: “You called us delusional.” 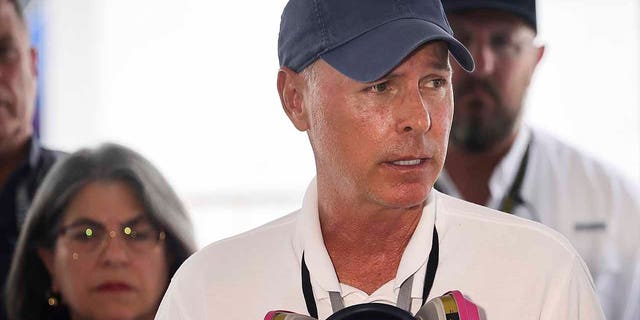 The board agreed to explore ways to build a victims memorial, either on a sliver of land where part of the tower fell, or at another location.

Currently, an offer of $120 million for the Champlain Towers South property is on the table. The swap plan would have allowed the buyer to build a tower instead at the site of Surfside’s 10-year-old community center, which features an oceanfront pool and waterslide and multi-purpose rooms. A new center would be built, along with a memorial, at the disaster site.

Miami-Dade Judge Michael Hanzman, who is overseeing the class-action lawsuit over the collapse, had favored the swap as a way of compensating victims through a property sale while enabling a memorial to be built. 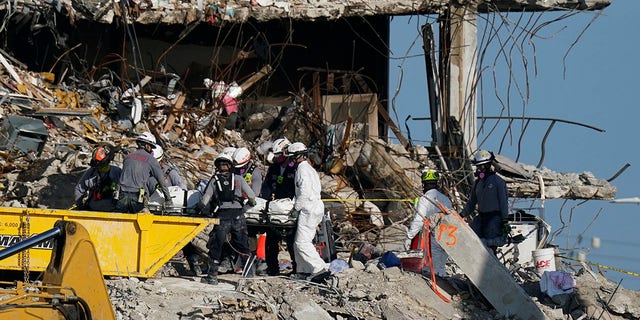 Search and rescue personnel remove remains on a stretcher as they work atop the rubble at the Champlain Towers South condo building where scores of people remain missing more than a week after it partially collapsed, Friday, July 2, 2021.
(AP Photo/Mark Humphrey)

“It shouldn’t be their decision, it should be the residents’ decision,” said David Rodan, whose brother and three cousins died in the collapse. “They’re afraid because they know that the residents want to do the right thing, they want to look back in history and see a memorial where it should be instead of a building.”

Rodan told the Herald that he and his group will continue pushing for a referendum.

“The community wants to see a memorial there and if the land swap is the only option, the community is willing to move their community center five blocks,” Rodan said.

However some residents who oppose the land swap told commissioners they support a memorial site, but not at the expense of the community center.

“I’m in favor of a memorial. I think it’s only right for the victims and their families. I’m not in favor of a land swap,” Surfside resident Paul O’Malley told NBC6.

Raquel Oliveira, whose husband and 5-year-old son died in the collapse, asked commissioners to help the families find a way to build a memorial.

“Maybe the swap is not the best option or maybe it is,” she said. “What I ask is that we have a little bit of time to take the right decision.”