Stockholm: Sweden is heading for a hung parliament after an election that saw the popularity of the nationalist Sweden Democrats surge, as one of Europe's most liberal nations turns right amid fears over immigration.

Far-right parties have made spectacular gains throughout Europe in recent years amid growing anxiety over national identity and the effects of globalisation and immigration following armed conflict in the Middle East and North Africa. 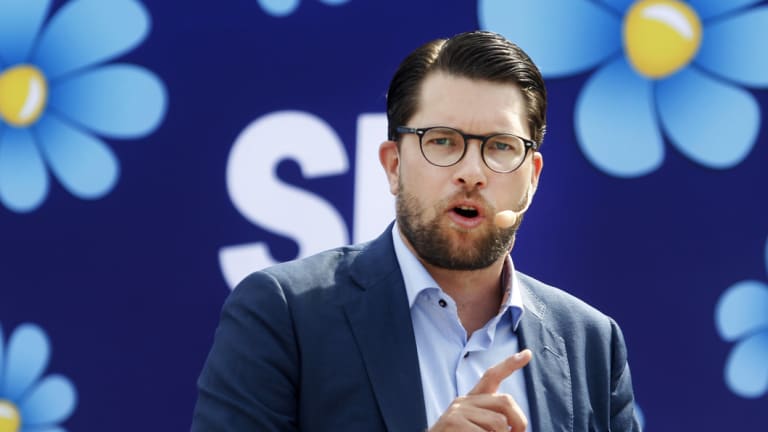 In Sweden, an influx of 163,000 asylum seekers in 2015 – the most in Europe in relation to the country's population of 10 million – has polarised voters and fractured the political consensus.

Partial results from Sunday's vote, with some 80 per cent of districts counted, show the ruling centre-left Social Democrats and Greens and their Left Party parliamentary allies winning 40.6 per cent of the vote, while the opposition centre-right Alliance were seen at 40.1 per cent.

The Sweden Democrats, a party founded by white supremacists, rose to 17.8 per cent from 12.9 per cent in the last election four years ago, in effect securing the balance of power.

Still, their result looks set to fall short of their own leaders' predictions of a vote of 20 per cent or more.

Nevertheless, their leader Jimmie Akesson told a party rally: "We will gain huge influence over what happens in Sweden during the coming weeks, months and years".

With neither main political bloc able to command a majority, the Sweden Democrats, who want the country to leave the European Union and put a freeze on immigration, could play a decisive role in negotiations over forming a government that look set to be complex and drawn-out.

Akesson challenged Ulf Kristersson, the centre-right Alliance's candidate for the premiership, to choose between seeking support from the Sweden Democrats and the incumbent Social Democrat prime minister, Stefan Lofven.

The election will add to concerns in Brussels as the European Union enters campaign mode ahead of the European Parliament election in May, which could give more voice to eurosceptic groups and thwart efforts at closer EU integration.

The record levels of asylum seeks in 2015 magnified worries about a welfare system that many voters already believe is in crisis, even though refugee numbers have fallen sharply since then.

Lengthening queues for critical operations, shortages of doctors and teachers and the failures of police to deal with inner-city gang violence have shaken faith in the "Swedish model", built on a promise of comprehensive welfare and social inclusion.

Flashbacks reveal the truth about Mick's abuse as Katy is caught in EastEnders?