They just don’t get it! Large crowds stop for a coffee and a chat as they totally ignore social distancing rules at a Sydney beach – despite dire warnings that they could be spreading coronavirus

A popular Sydney beach continues to be busy despite desperate pleas for people to stay home and prevent the spread of coronavirus.

Manly, on Sydney’s picturesque Northern Beaches, was packed on Saturday as locals adopted a ‘business-as-usual’ attitude despite the COVID-19 pandemic.

Couples, families and friends were seen breaking social-distancing rules – with one family telling Daily Mail Australia that they wouldn’t let the global crisis that has killed more than 50,000 people interrupt their usual morning swim.

The Northern Beaches are a known hotspot for coronavirus, having the second-highest number of cases in New South Wales. There are 101 cases of COVID-19 in the area, behind only Bondi in the city’s eastern suburbs.

Saturday’s busy turnout comes after beachgoers also flocked to Manly and nearby Freshwater and Curl Curl beaches on Friday. 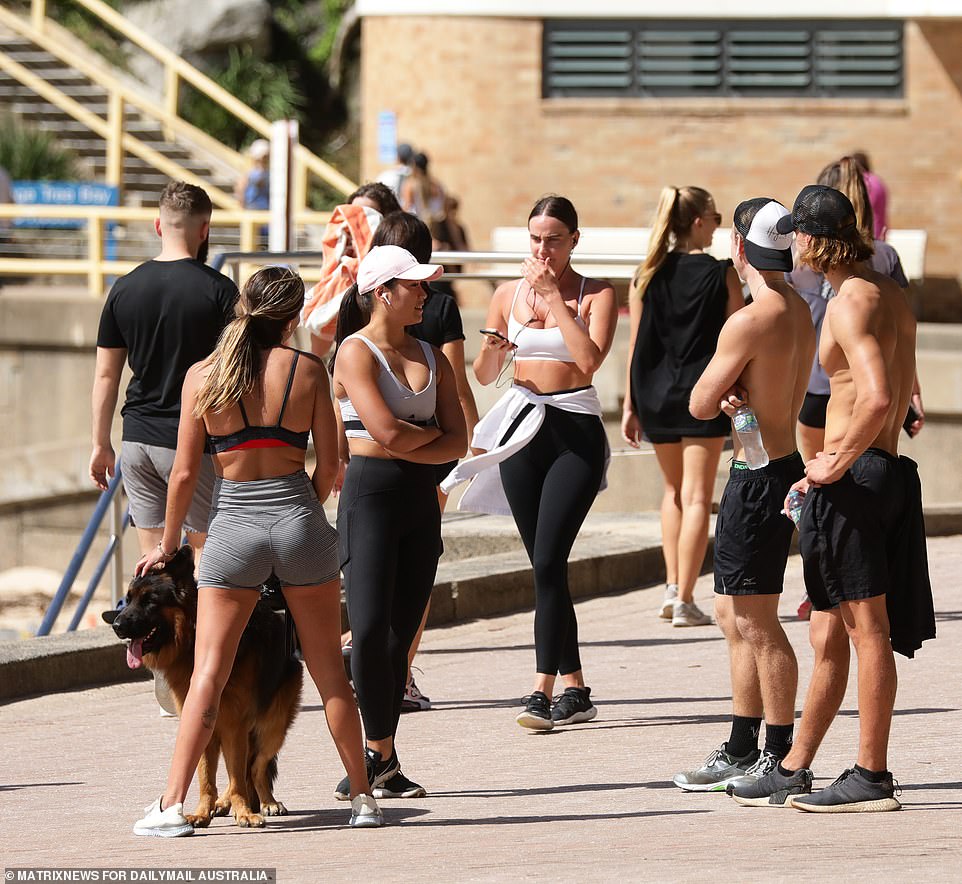 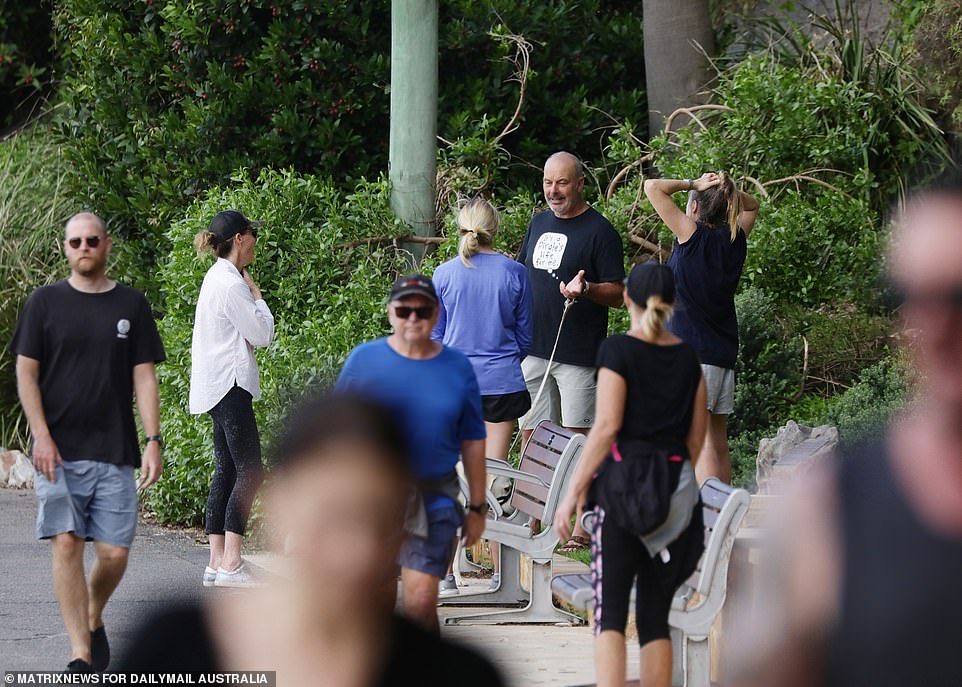 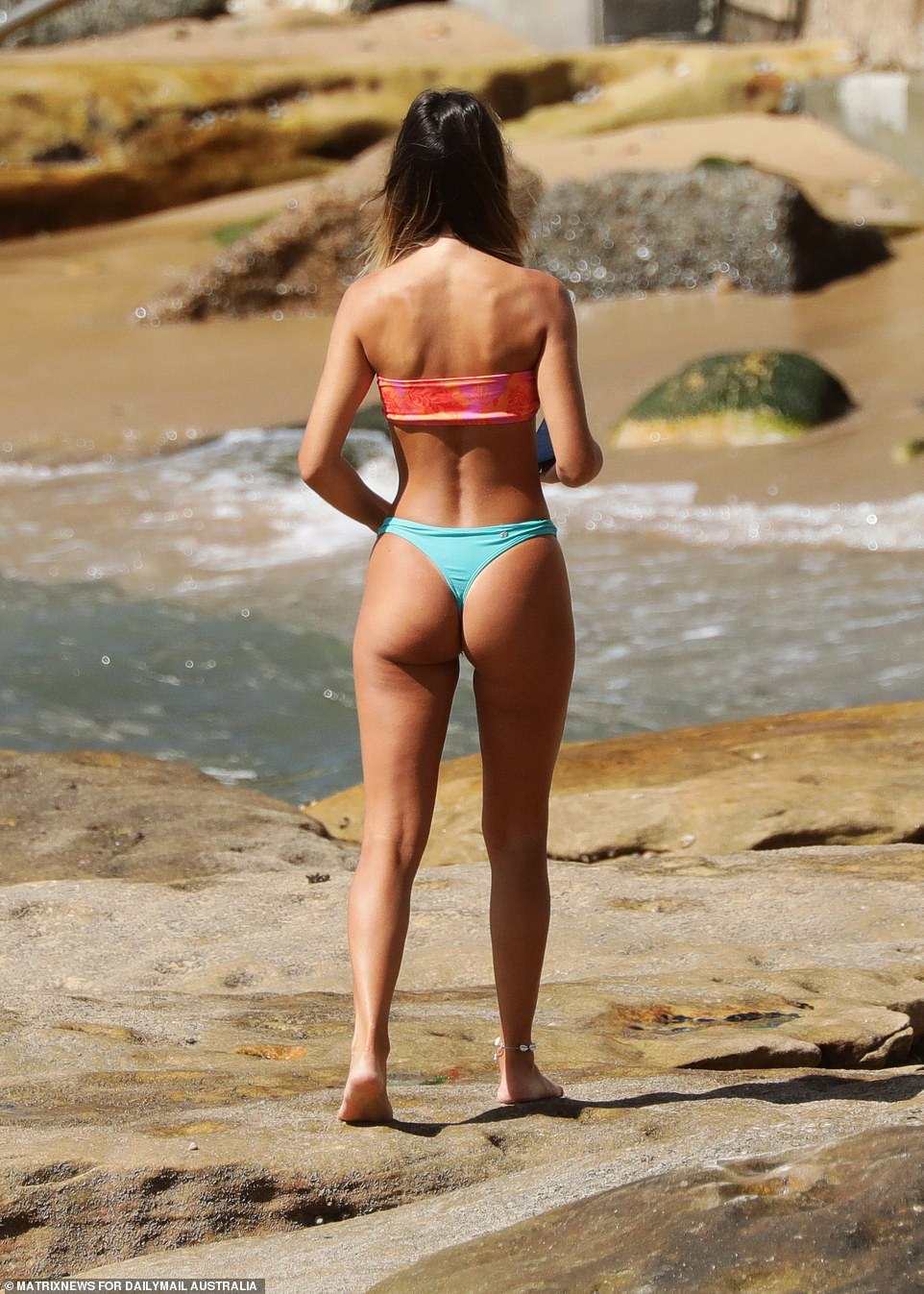 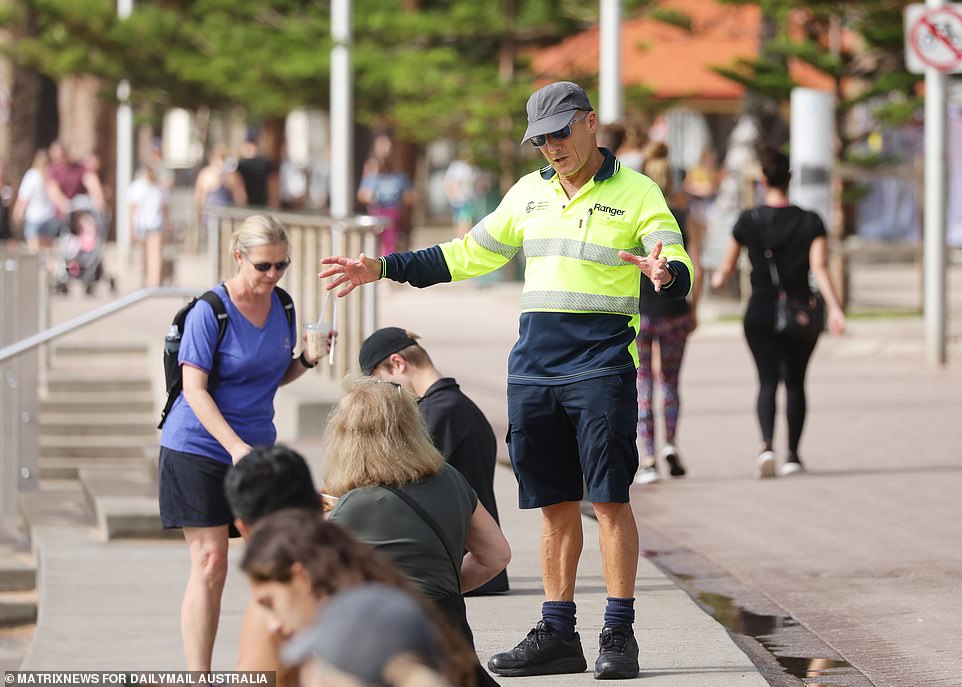 His father, Chris Shaw, noted that ‘last week there were a few people here clumped in groups but I hope that people are starting to get the message about how serious this virus is now’.

Beachgoers at Manly today were pictured chatting in groups, ignoring the 1.5-metre distancing rule and sunbaking.

Some were even seeing standing around sipping coffees as they enjoyed their 22C morning at the beach.

The Federal Government’s tough social distancing measures require all Australians keep a distance of 1.5metres away from each other and restrict groups to a maximum of two people.

There has been a fresh surgeovernight in coronavirus cases in New South Wales with another 104 people confirmed to have the killer illness.

NSW Health Minister Brad Hazzard said there were now 2,493 cases of coronavirus in the state, up from 2,389 on Friday.

The number of new cases in NSW had been declining for the last three days before Saturday’s new figures. There are now 5,539 confirmed cases in Australia, meaning more than 43 per cent of cases are in New South Wales.

The NSW Government implemented further restrictions that only allow residents to leave their homes for one of 16 essential reasons.

One young woman out for a walk with her boyfriend said she felt at risk coming down to the beach.

Jana, 26, said: ‘It’s really busy down here, people definitely aren’t behaving any differently. I don’t like to walk down here because I feel like it’s too crowded.’ 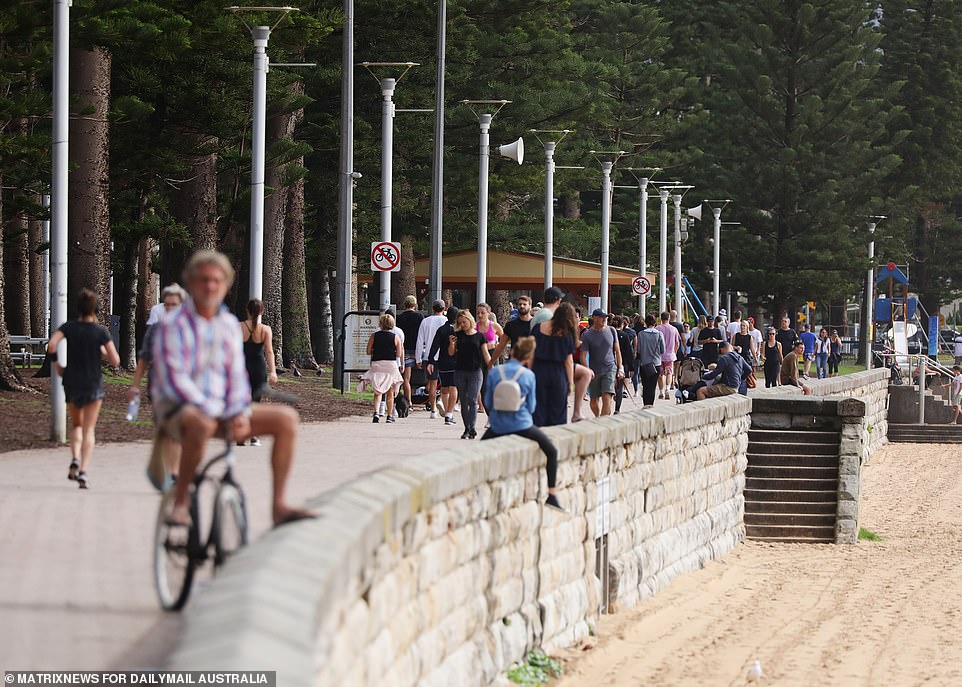 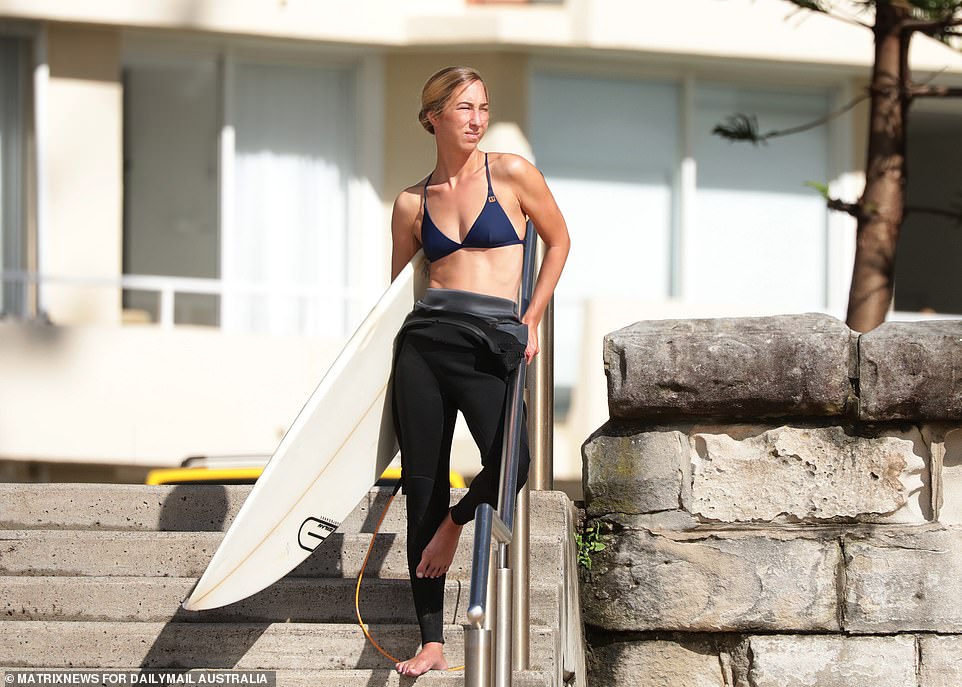 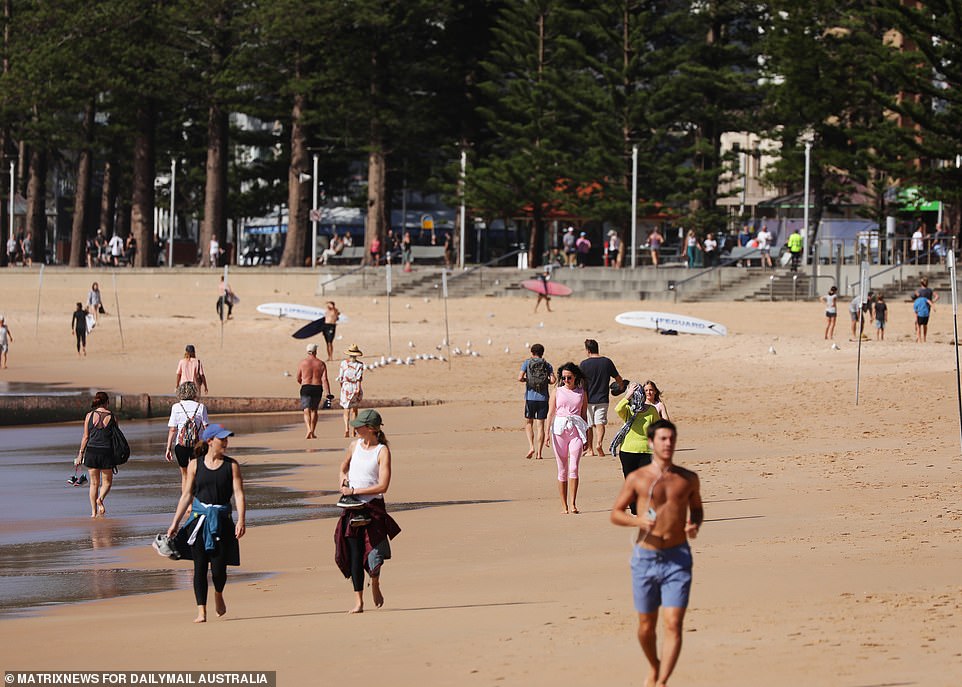 Two friends who were strolling along the walkway told Daily Mail Australia that the lack of social distancing was an issue in Manly.

One woman, 33-year-old Kat, said: ‘The social distancing measures are not well understood here. Not may people are giving you space, especially all the runners jogging and brushing up against you.

‘There’s a bit of confusion around the restrictions and it’s not really clear if we should be going out or staying home.’

On being out and about herself, Kat said: ‘I don’t feel at risk. I feel most guilty that I could be putting someone else at risk.’ 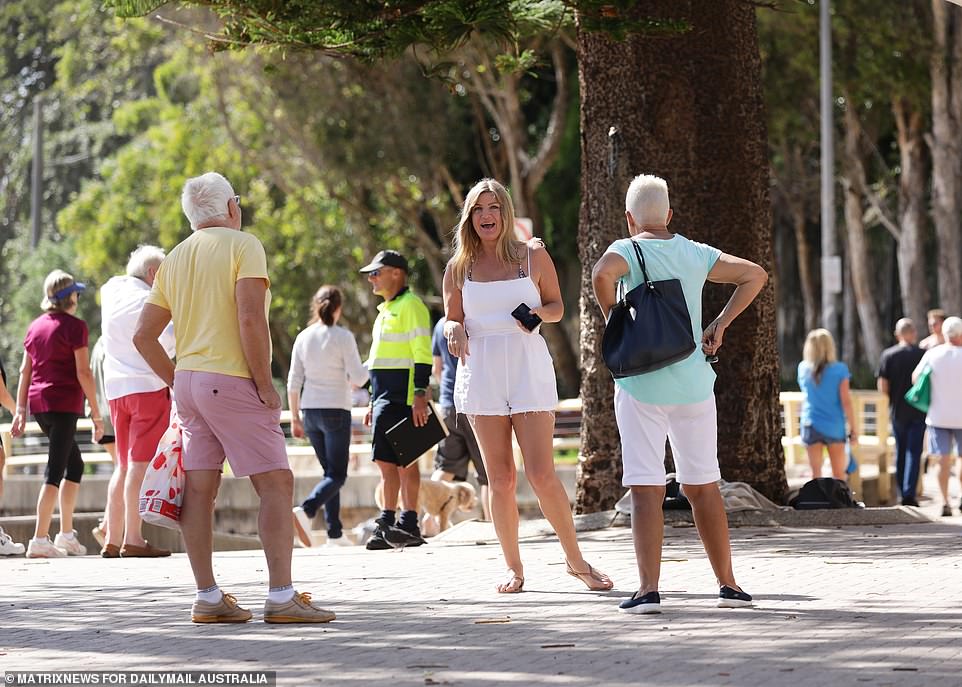 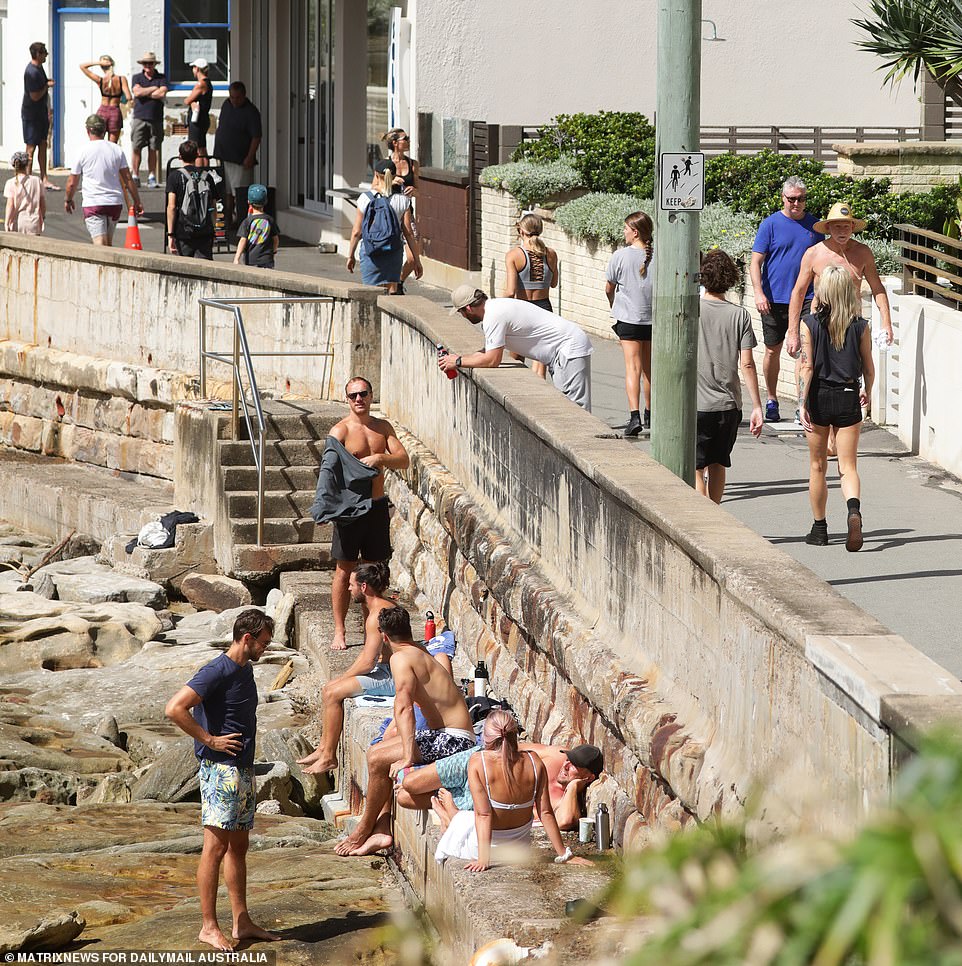 Her friend El, also 33, said that it was ‘hard to make the space among so many people’.

She noted that: ‘Being outside is the only thing keeping people sane at the moment, so I think it’s important to keep the beach open wherever they can.’

Licien Batista, 34, on a walk with her baby and friend from Brazil, said that the social distancing measures should be more closely followed.

‘If everyone keeps their distance and follows the rules then we will be able to get over this virus quicker,’ she explained. 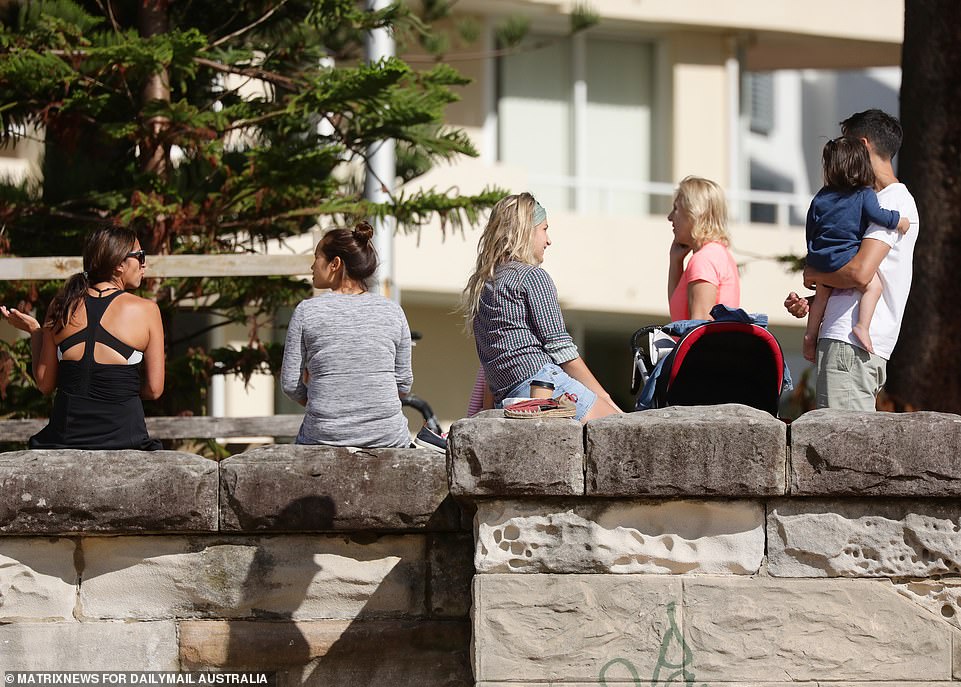 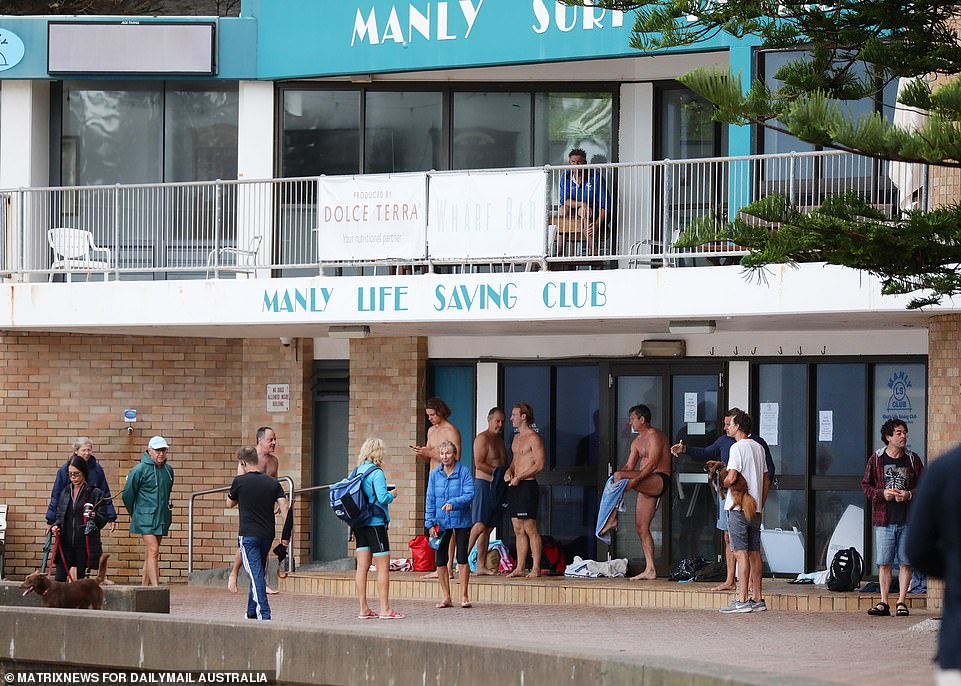 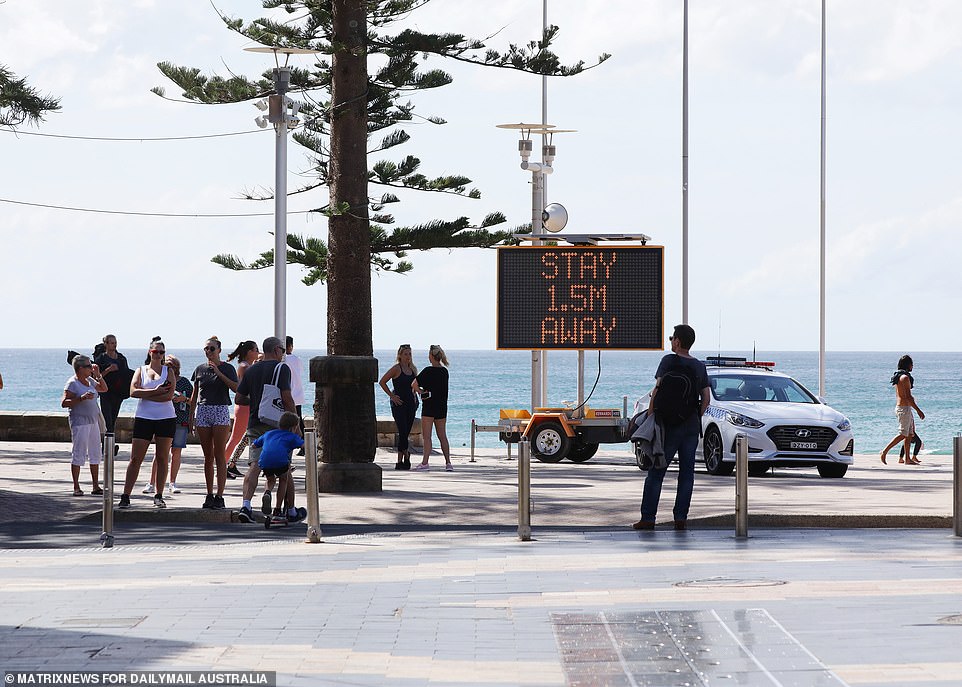 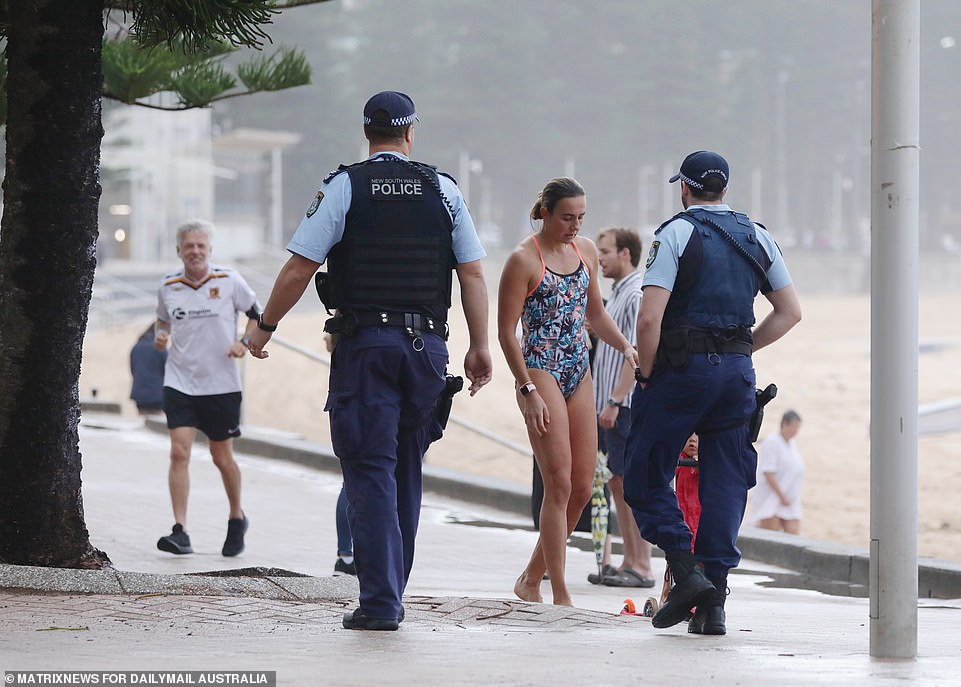 ‘Some people aren’t following the rules and they might get us sent into a total lockdown. When it’s nice weather people come down to the beach and hang out in groups and stroll around or sit on the sand,’ Ms Batista said.

Other beach-goers felt that they were protected from the virus as long as they were cautious.

One couple pushed a pram along the walkway and said they were taking extra precautions.

Jeremy Bennett, 36, said: ‘We’re just being really careful, staying away from people and making sure not to touch any railings or anything, we’ve brought hand sanitiser with us.’ 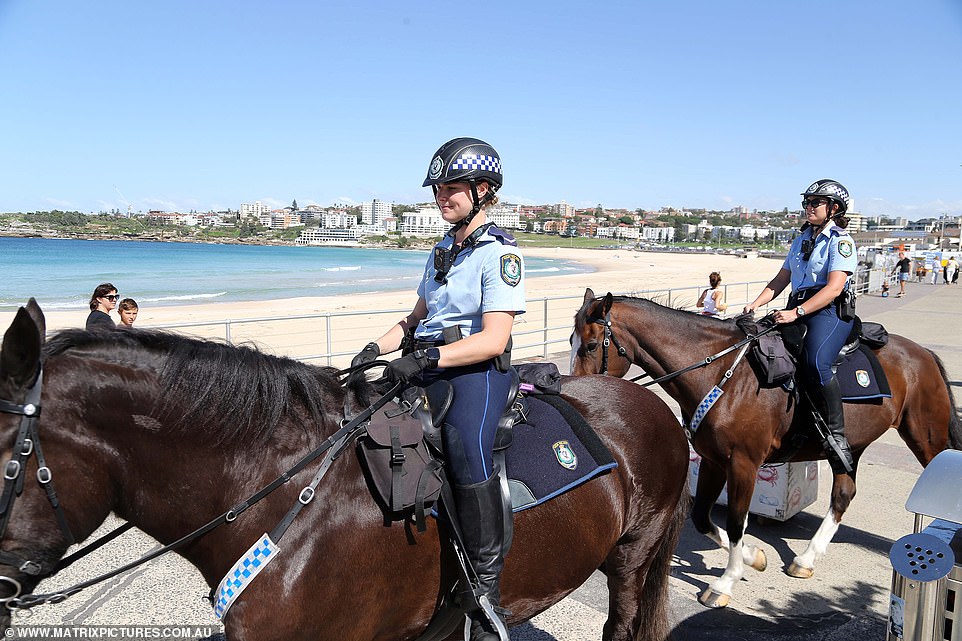 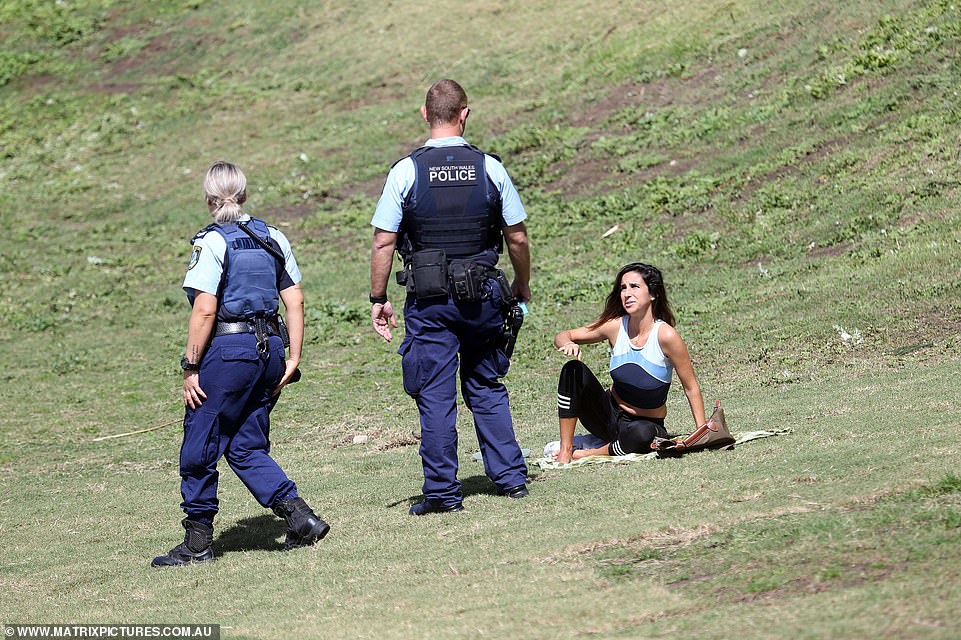 His wife Sasha, 31, agreed: ‘We don’t feel at risk as long as there’s lots of space but sometimes the beaches can get really busy and clogged up.’

Two NSW police officers were patrolling the beach and asked anyone who was not exercising to return home.

Lifeguards and council rangers were also monitoring the group sizes.

Unlike Manly, the beaches in Sydney’s East were shut down over coronavirus fears.

This did not stop Bondi locals from trying to enjoy some sunshine by the beachside on Saturday.

NSW Police patrolled Bondi Beach on horseback and approached anyone who was sitting down in the grass.

They asked couples and families to move along back to their homes.

Groups of friends and single beach-goers were also informed that they could not stay at Bondi beach or its surrounds.

The number of positive coronavirus cases across Australia have reached 5,539. 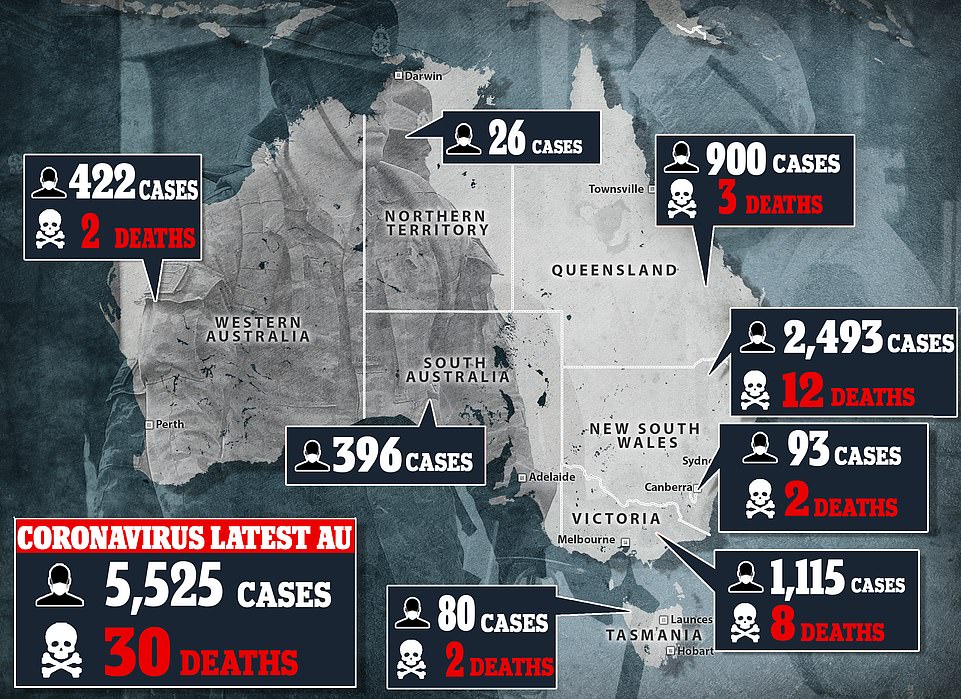 The number of positive coronavirus cases in Australia rose to 5,523 and the death toll reached 29 on Saturday April 4

How to bid at auction in a cooling market

Prince Harry arrives back in UK for Prince Philip's without Meghan Markle – but where will he stay?