A deer walks into a bar in the Royal National Park. Sound like a bad joke?

Actually it's the Deeban Spit sand bar at Maianbar Beach in Sydney's south. The deer, one of about 2000 in the park according to the Friends of Royal organisation, swim across Port Hacking estuary at low tide. 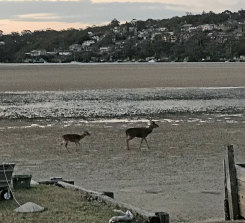 That may be a clue to the origin of the feral rusa deer spotted twice in central Sydney this month. Two deer sauntered along in Leichhardt at 7am. Upon capture one needed to be euthanised, the other escaped. Nine days later a female, likely the escapee, was sighted in Pyrmont and on rail tracks near Central station. It too was euthanised. But where did they come from? 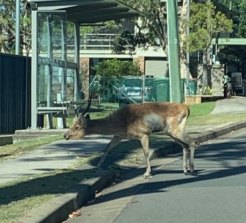 Rusa deer at the bus stop in Maianbar, 2020. Credit:Sam Townsend

He has a theory about the route taken by the Sydney deer. "That journey wouldn't have happened overnight," Mr Parker said. "Along the way there are a number of islands of small pasture where they could have spent a couple of nights.

"More than likely they have followed a railway corridor and zig-zagged through suburbs or little creeks leading into main river sources. We have got [tracking] collars on six fallow deer and are quite alarmed at the distances they are travelling." He said deers aren't frightened by trains and cross busy roads including the M4.

Sydney Trains says since July some 15 incidents have involved deer being struck by trains along with 25 sightings. The last deer strike was October 5 at Unanderra in Wollongong. The agency has invested more than $1 million on fencing along the South Coast line through the national park. 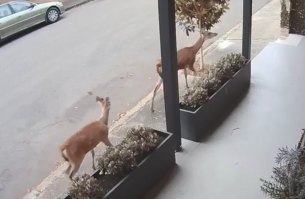 Two deer were filmed running through Coleridge Street at Leichhardt on October 6.Credit:ABC/Facebook

Mick Jovanovic's house overlooks the sand bar at Maianbar. "The deer are everywhere, I see them in the water every day," he said. "Three weeks ago two stags had a fight in front of my property. It was very good to watch."

Peter Macdonald is across Port Hacking at Grays Point. "You see the antlers coming across the river," he said. "They are constantly here." 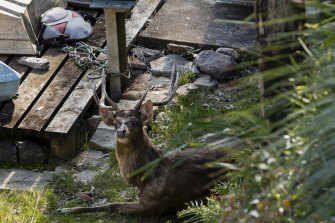 A deer spotted on October 22 in the mangrove swamps of the Port Hacking estuary at Grays Point.Credit:Rhett Wyman

So where did the Sydney duo go next? Jim Koukoutaris, neighbour to Mr Macdonald, hypothesises. "They would follow the green belt," he said. Up through Loftus, Woronora Heights, Bangor, Illawong across the Georges River and all of a sudden you are in Lugarno," he said.

Where to from there? With the aid of Google Earth, it appears possible they continued north alongside the Georges River to Riverwood. Turn right and follow the rail corridor to Wolli Creek, follow the Cooks River then through Marrickville golf course and pick up the light rail corridor at Dulwich Hill. Six stops to Marion and disembark at Leichhardt. Well, it's a theory.

Sydney may, for the time being, celebrate that it isn't plagued by deer to the same extent as Wollongong. Lord mayor Gordon Bradbery in a submission to the Senate inquiry says 3500 deer have been culled since 2011.

An 80kg Rusa female can consume 2-3 kg of vegetation per day.

The impact of large 80 to 120 kg animals on a car can be extensive.

Source: Friends of Royal submission to Senate inquiry into the impact of feral deer, pigs and goats, July 2020.

The most important news, analysis and insights delivered to your inbox at the start and end of each day. Sign up to The Sydney Morning Herald’s newsletter here, to The Age’s newsletter here and Brisbane Times‘ here.

This Is How Much Jack Quaid Is Worth

California hospitals contemplate rationing care as they get more overwhelmed

Plusnet could finally rival BT, Sky and Virgin thanks to a huge broadband speed upgrade