Is that wise, owl? Thirsty bird makes a rare daylight appearance to bathe in a pond and drink beakfuls of water

An artist based in Yorkshire was lucky enough to capture the moment a tawny owl took a bath in his pond at home during the UK’s recent heatwave.

Robert Fuller, a respected artist who paints pictures of animals, set up a camera at home in Thixendale, North Yorkshire.

In this video filmed in June a curious tawny owl can be seen jumping into the pond – unusually in daylight – and taking down several beakfuls of water.

The brown owl relaxes in the water and casually looks over its shoulders before setting in for a bit of daytime bathing. 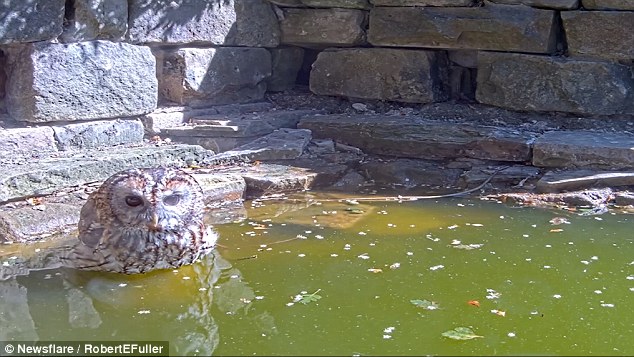 A nocturnal tawny owl has been seen relaxing in a Yorkshire garden pond during the day time. Even more bizarre is the unique way the bird is sipping at the water 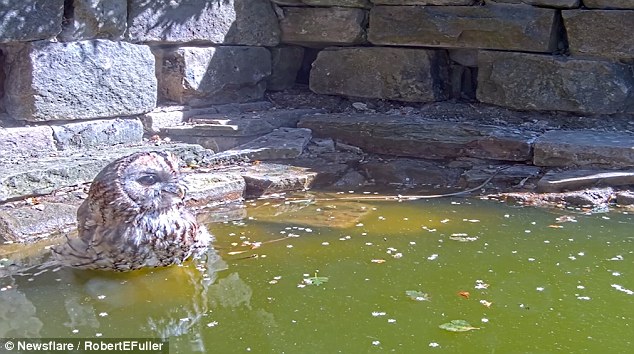 The amazing moment was captured by artist and photographer Robert Fuller. He often uses nest cams to study animal behaviour

Tranquil as can be the tawny owl is unfazed by leafs, twigs and even another bird swooping past.

At the end of the clip the owl flies off to the right of the camera frame, spreading its amazing wings.

Mr Fuller explains: ‘As temperatures soar here in the UK during one of the most prolonged hot summers on record my wildlife cameras captured this tawny owl taking a dip in my pond.

‘Not only is this unusual behaviour for a nocturnal bird to be bathing in daylight, but it is also extraordinary to see an owl drinking like this.

‘Normally, birds of prey get the moisture they need from the prey they consume.

‘Watch this owl gulping beakfuls of water in the brilliant sunshine.’ 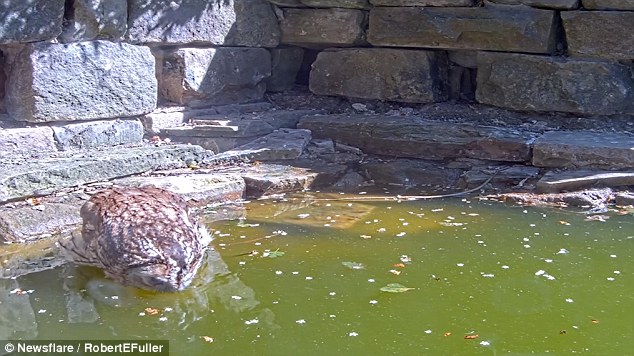 Mr Fuller said the beakfuls of water was unusual as ‘normally, birds of prey get the moisture they need from the prey they consume’ 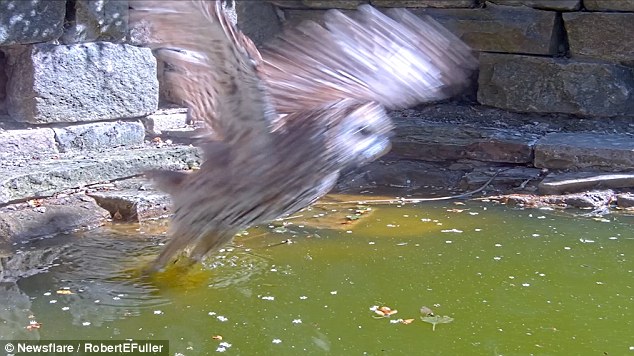 The tawny owl sits for a while, enjoying the cool water on a hot summers day, and then flies out of the camera frame 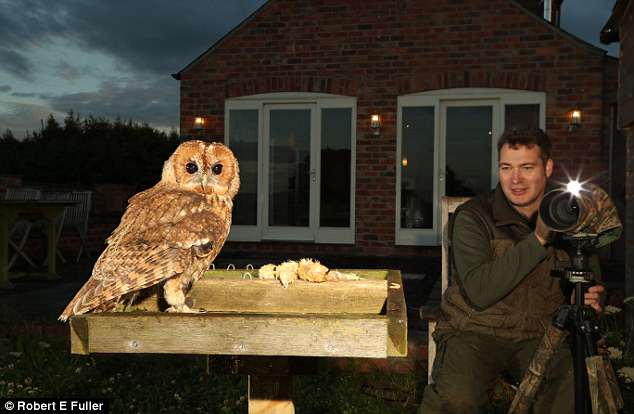 Pictured: Wildlife photographer Rober Fuller sets up his camera to get a snap of a tawny owl

Fuller uses nest cams to study animal behaviour so that he can ‘capture the individual characters’ of his wild subjects in paint.

The artists work has been used by the RSPB and National Trust and exhibited in galleries across the world.

His own gallery in North Yorkshire is visited by as many as 7,000 people each year.

Your Daily Horoscope for Monday, April 29

Germany: Two killed as van drives into crowd in Muenster