Disabled teacher, 64, is hospitalized after 18-year-old female student PUNCHED her in the face as part of sick ‘slap a teacher’ TikTok challenge

A disabled teacher at a Louisiana high school was hospitalized after a female student punched the unsuspecting educator in the face as the incident was filmed and posted online in what cops suspect was part of the ‘slap a teacher’ TikTok challenge.

In the video posted to TikTok on Wednesday, the unidentified 64-year-old English teacher at Covington High School is seen sitting at her desk in a near-empty classroom talking to Larianna Jackson, 18, after the dismissal bell rang.

About 20 seconds into the video, Jackson suddenly wallops the woman in the face and repeatedly strikes her, sending the teacher sprawling off her chair and onto the ground.

Voices in the background, presumably belonging to other students, said: ‘B**** she better f***ing not,’ as if they knew the attack was going to happen. 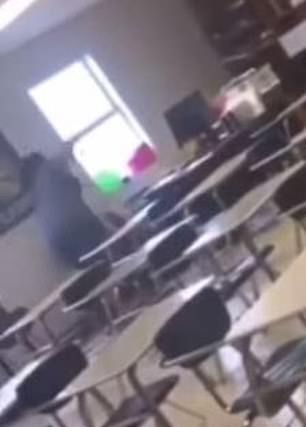 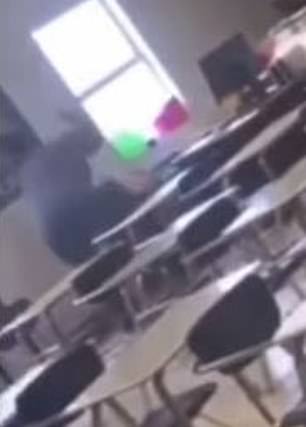 A 64-year-old disabled teacher at a Louisiana high school has been hospitalized after a female student punched her in the face as part of a ‘slap a teacher’ TikTok challenge. About 20 seconds into the video Jackson suddenly punches the unidentified teacher in the face and repeatedly strikes her, causing her to fall off her chair and onto the ground 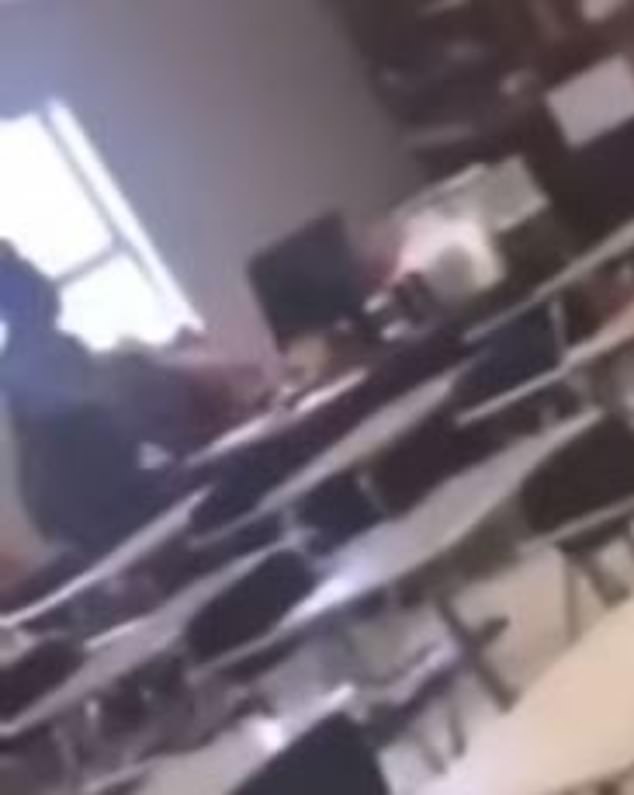 Voices in the background, presumably belonging to other students, said: ‘B**** she better f***ing not,’ as if they knew the attack was going to happen

Police said that the teacher had to be hospitalized to treat injuries she sustained in the ‘vicious’ attack, according to a statement posted by the Covington Police Department on Facebook on Thursday.

Police did not give any information on the teacher’s disability.

Jackson has been arrested and charged with battery of a school teacher, which is punishable as a felony. She is being held at St Tammany Parish Jail until her trial.

Police suspect the attack was another cruel copycat of the TikTok challenge known as ‘slap a teacher’.

A statement also read: ‘The Covington Police Department would like to remind everyone that anyone who participates in such a challenge will be booked accordingly.

‘In this post we also attached the video that has been circulating around the internet. This matter is still under investigation and more arrests for forthcoming.’

However, TikTok took to Twitter to let people know that no such trend exists on the social media app.

‘The rumored “slap a teacher” dare is an insult to educators everywhere. And while it is not a trend on TikTok, if at any point it shows up, content will be removed,’ the tweet said.

Yet there’s been a supposed list of school challenges circulating on the platform, and October’s ‘slap a teacher’ follows September’s ‘devious licks’ challenge where students posted TikTok videos of themselves vandalizing school bathrooms and stealing soap dispensers and even turf from football fields.

Some academic institutions were forced to closely monitor or even shut down bathrooms, where much of the vandalism occurred.

TikTok removed ‘devious licks’ content from its platform and redirected hashtags and search results to its guidelines to discourage the behavior and that it doesn’t allow content that ‘promotes or enables criminal activities’.

It appears TikTok has also promptly removed all videos of the ‘slap a teacher’ challenge. DailyMail.com searched the term and there were ‘no results found’.

‘This phrase may be associated with behavior or content that violates our guidelines,’ the screen read.

However, the incident at Covington High School, located about 45 miles north of New Orleans, was not the first one that has been attributed to the viral craze.

Educators in South Carolina confirmed last Friday that an elementary student had assaulted a teacher by striking her in the back of the head. 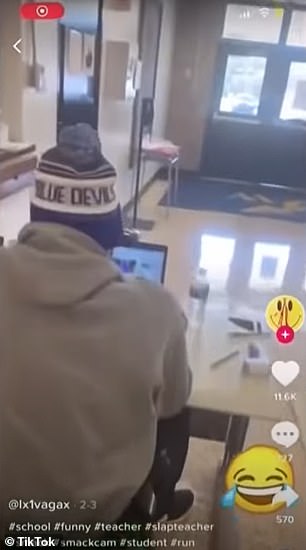 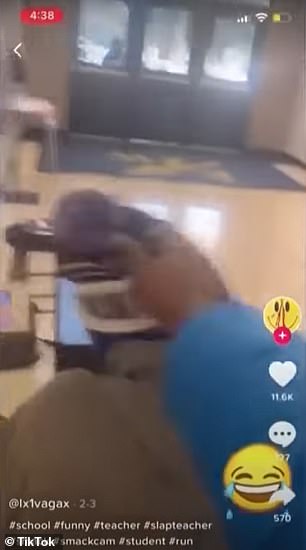 The ‘slap a teacher’ challenge, which was designated for the month of October on a list of school challenges circulating across TikTok, prompts students to strike a teacher or staff member and then run away before they are caught. At least two school districts have already reported slapping incidents that were allegedly connected to the challenge. This video purports to show an unidentified teacher being slapped

Bryan Vaughan, Director of Safety and Transportation at Lancaster County Schools in South Carolina, issued a letter to parents warning that any assault is ‘an expellable offense’.

‘This type of behavior, just like theft and destruction of property, is not a prank. It’s criminal behavior,’ Vaughan wrote.

‘Any student who physically assaults a staff member will be held responsible both legally and by board policy. Assault on a staff member is an expellable offense which means the student is removed from the school for the rest of the year’.

He also urged parents to ‘educate [their] kids on the issue and monitor their social media habits’.

A slapping incident was also reported at a school in Springfield, Missouri and resulted in police involvement. It is unclear if that student faces any criminal charges.

Meanwhile, leaders from school districts across the United States say their educators are on ‘high alert’.

Legislators, including Connecticut Attorney General William Tong, argue that TikTok needs to meet with lawmakers, educators and parents and ‘commit to reforms that stop reckless content’. 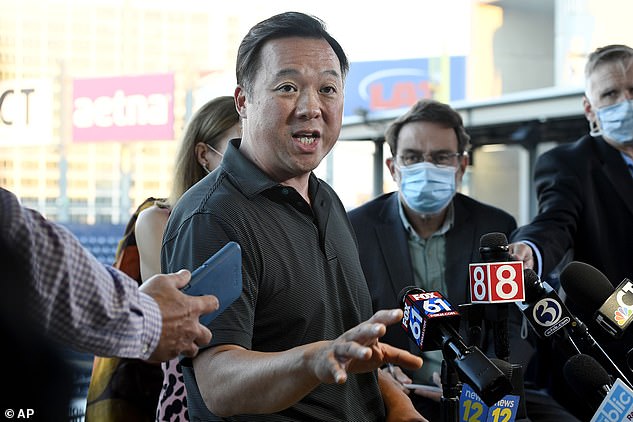 ‘The last thing anyone needs right now is for children to be inundated by targeted social media encouraging lawlessness, self-harm and reckless, dangerous pranks,’ Tong wrote in a letter to TikTok’s CEO.

‘Viral TikTok videos have resulted in youth overdosing on medications, disfiguring their bodies, and engaging in a wide variety of physically dangerous acts. With new reports of the “slap a teacher” challenge, it is clear that TikTok is unable to control the spread of harmful content. Simply put, whatever TikTok has been doing to enforce its terms of service has not been working and merits serious review and reform.’

The California Teachers Association took to Facebook on Tuesday to alert their members about the ‘dangerous trend’.

‘Educators beware!’ the post read. ‘One of the latest trends on social media is a “challenge” that encourages students to physically attack (“slap”) educators and video record it.’

The union, issuing a notice on how educators should handle the trend if it does come to their schools, reminded teachers that regardless of whether or not slapping results in injury, it is ‘assault and battery’.

The organization deemed the behavior ‘completely unacceptable’ and reiterated that in ‘addition to potential serious harm to victims, a student perpetrator could face serious consequences, including expulsion or criminal prosecution’. 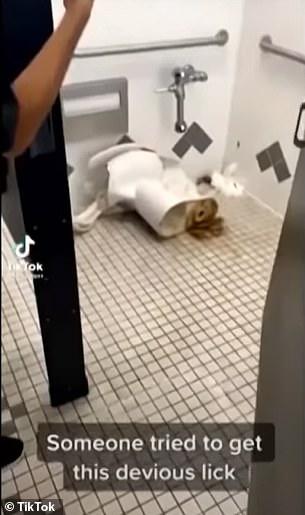 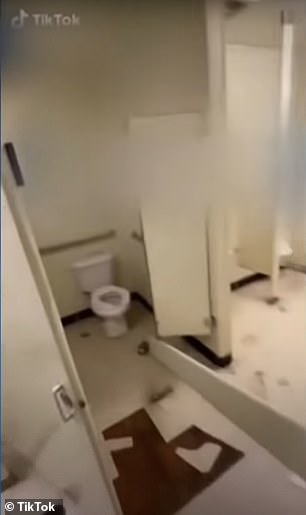 The ‘slap a teacher’ challenge follows September’s ‘devious licks’ challenge in which students posted TikTok videos of themselves vandalizing school bathrooms and stealing soap dispensers and even turf from football fields. Some academic institutions were forced to closely monitor or even shut down bathrooms, where much of the vandalism occurred

School officials are also urging students not to participate in the trend and asking parents to facilitate discussions with their kids about the dangers of participating in social media challenges.

‘We are calling on parents to talk with their children and let them know that threatening and engaging in physical harm is not a joke. Such action is and will be treated as assault. There will be zero tolerance for such behavior,’ Jenni Benson, president of the Nebraska State Education Association, wrote in a press release.

Her claims were echoed by John Spatz, executive director of the Nebraska Association of School Boards.

‘We need parents to talk to their kids and warn them of the serious consequences they face for such stunts, especially slapping a teacher,’ he wrote.

‘Not only are these challenges disturbing, they are asking students to participate in criminal or possible life-changing events.’

Oscars 2022: Multi-Hyphenate Will Packer Will Produce Show for First Time

Why Don’t I Have A Facebook Avatar? Try This Before Giving Up