Home » Teddy bears and figurines in riot gear: How China is hoping to convince Hongkongers of need for tough law

Hong Kong: Teddy bears clad in black police riot gear, on sale for more than A$80 apiece. Schoolchildren’s messages of gratitude to the authorities, pasted onto the walls of their schools. Uniformed police officers goose-stepping in formation, accompanied by a counter-terrorism drill complete with a helicopter and hostage simulation.

This is National Security Education Day in Hong Kong, the first since the central Chinese government imposed a wide-ranging security law on the territory last year. 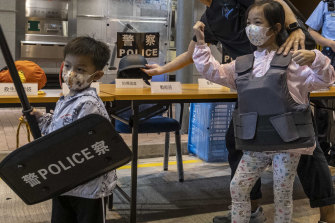 The law, a response to months of fierce and sometimes violent anti-government protests that began in 2019, has become synonymous with the authorities’ efforts to clamp down on dissent and ensure staunch loyalty. And the panoply of activities on Thursday indicated how they plan to do so: with a mixture of cutesy cajolery and overt shows of force, for a law that an official once said should hang over Hongkongers like a “sword of Damocles”.

“Any ‘hard resistance’ that undermines national security will be struck down by the law. Any ‘soft resistance’ will be regulated by the law,” Luo Huining, the central government’s top official in Hong Kong, said at a ceremony kicking off the day’s events.

The full program was designed to inculcate young and old with the importance of national security. It had been promoted extensively through street-side banners, front-page advertisements in the city’s newspapers and even a scrolling digital display on one of Hong Kong’s downtown skyscrapers, among the government’s most concentrated propaganda efforts since the law was enacted in June.

The law’s effects have already been widely felt. Authorities have cited it to arrest around 100 people, gut the political opposition and remake Hong Kong’s electoral system. 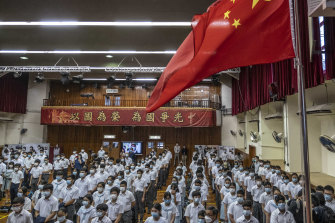 Students stand during a flag-raising ceremony for National Security Education Day at a secondary school in Hong Kong, the first such occasion since the introduction of new national security laws which followed months of pro-democracy protests.Credit:Lam Yik Fei/The New York Times

Even the line-up of speakers at the event’s opening ceremony underscored how once-freewheeling Hong Kong was being remade in mainland China’s image, with the central government wresting control from local officials.

Carrie Lam, the city’s chief executive, was the only sitting Hong Kong official to speak during the ceremony, which was held in the cavernous harbour-side convention centre. The other speakers included the head of the central government’s newly created security office in Hong Kong, the commander of the Chinese People’s Liberation Army garrison and the head of the Chinese Foreign Ministry’s branch in the city.

“I especially thank the Hong Kong people,” said Zheng Yanxiong, the security office head. “From being unfamiliar with, guessing about, and waiting and watching for the national security law, they have arrived through a very natural and reasonable process at acceptance, welcoming and support.”

After the speeches, attendees filed out of the auditorium, each clutching a tote bag emblazoned with a custom National Security Education Day emblem, a logo in the shape of a shield, edged by a row of books. 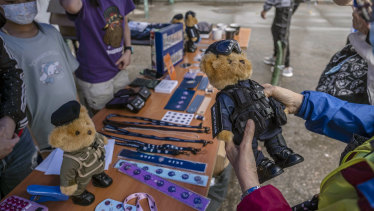 Outside the convention centre, a helicopter hovered, part of another exhibition nearby — an open house at the Hong Kong Police College.

If the opening ceremony had showcased Hong Kong’s new reality via bureaucratic speeches, the police open house opted for the action-movie approach. It featured a demonstration by a counter-terrorism squad, complete with a police dog, hostages and an officer descending from an overhead helicopter, scooping an evacuee into his arms before being hoisted back into the air. Also on display was a water cannon, a familiar sight to pro-democracy protesters against whom such devices were frequently deployed in 2019.

Officers had begun the open house with a show of goose-stepping. Traditionally, many of the disciplined services in Hong Kong, a British colony until it was returned to Chinese rule in 1997, had marched in the British style. But the Chinese army is known for the distinctive goose-step, in which the leg does not bend at the knee.

“After enjoying this wonderful performance,” an official website for National Security Education Day promised, viewers would be led inside to view armoured vehicles, the explosives disposal team and recruitment information. 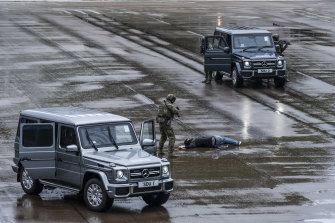 If memories of the counter-terrorism demonstration were not enough to take home, there were souvenirs available for sale. They included the riot-gear-clad teddy bear, a pair of zip ties strapped to its chest ($80); key chains engraved with crowd-control phrases like “Disperse or we fire” and “Warning: Tear smoke” ($5 each); and a set of figurines, clutching rifles and shields and bearing police warning flags about illegal assembly (“festive special offer”: $147).

It seemed unlikely that any sort of protest would break out in such a heavily fortified location. Still, officials seemed eager to forestall even a hint of the so-called soft resistance Luo had singled out in his speech. As journalists waited to enter the open house, security officers asked some who were wearing yellow or black face masks — colours associated with the pro-democracy movement — to swap them for blue ones the authorities provided.

There was at least one small protest on the day. As officials gathered in the convention centre, four pro-democracy activists tried to march through parts of downtown, bearing a poster that said “Without democracy and human rights, there is no national security”. They were followed by dozens of police officers. 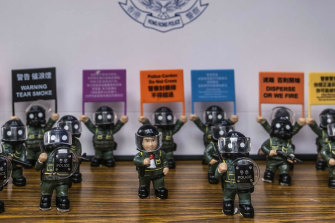 In other parts of the city, schoolchildren — including those in kindergarten — were enlisted in the promotion of national security. Education has been a particular focus for the authorities, who have blamed what they call biased curricula for turning Hong Kong’s youth against the government.

On Thursday morning, many schools hosted ceremonies to raise China’s national flag and sing the national anthem (which the Hong Kong government last year made a crime to disrespect).

At the Wong Cho Bau middle school, which is run by a pro-Beijing teachers union, the principal told students during a morning assembly that national security should be incorporated into every part of their curriculum, including geography and biology classes, as well as weekly flag-raising ceremonies.

“These daily accumulations can help us construct our own national concept and identity, so as to achieve prosperity and glory for the country,” said the principal, Hui Chun-lung. “So everybody should study hard. If the youth are strong, then China is strong.”

had filled out and pasted onto a “community mosaic wall.”

“Please express your opinion toward the idea of ‘Support national security, guard our home,‘” the prompt said.

In response, the students expressed their gratitude to the government and their relief that the pro-democracy protests had subsided.

“Those people who protest everywhere are intolerable, destroying public places and hurting our home,” one student wrote.

Other students’ responses were even more effusive.

The Ultimate TV Universe Included 'Everybody Loves Raymond,' 'The King of Queens,' and 3 Other Classic Sitcoms

Rachel Lindsay Has Harsh Words For This Bachelorette Contestant