‘Her entire head is alive!’ Hairdresser shares skin-crawling video of teenager with ‘more lice than strands of hair’ as the bugs swarm onto her FACE and neck

A hairdresser has shared a skin-crawling video of a teenager with ‘more lice than hair’ as the parasites crawl through her long locks and onto her face and neck.

Rachel Maroun, 21, who lives in Sydney, works as a head lice technician and was visited by a 13-year-old girl with long brunette locks, who had been suffering from millions of parasites most of the year.

When she arrived, Ms Maroun was left in shock by the severity of the case and showed the teenager’s hair, which has ‘hundreds of eggs buried’ and lice crawling over the scalp. 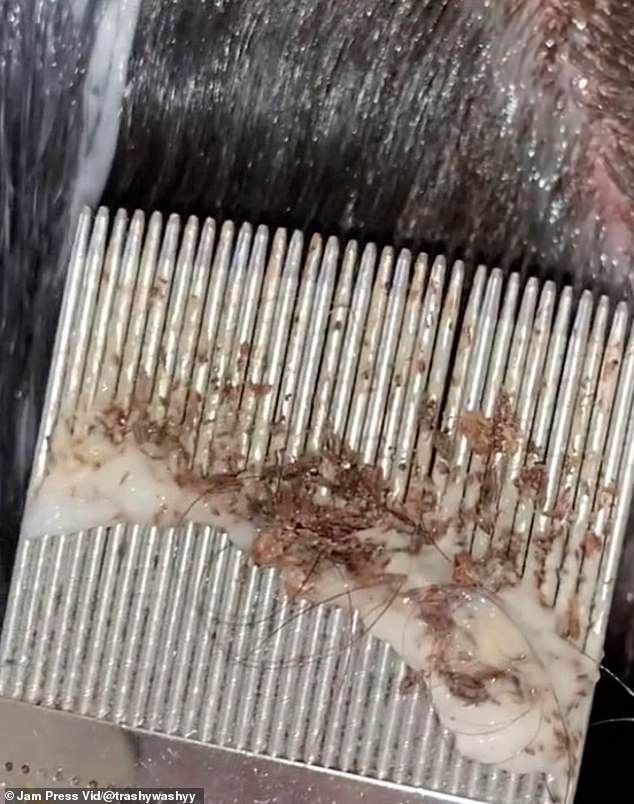 Rachel Maroun, 21, from Sydney, Australia, works at a lice clinic and was left shocked when she had a 13-year-old girl come in who had ‘more lice than hair strands’. As she was combing them, the lice were coming out in ‘wads’ 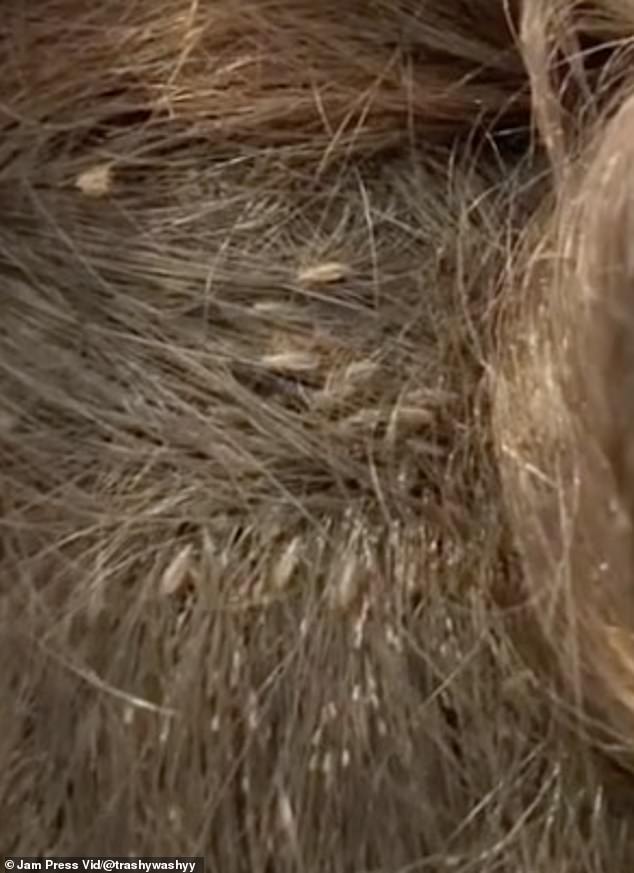 In the video, which she shared with her 1.7 million followers on TikTok, the large parasites can be seen crawling over her head, face and neck 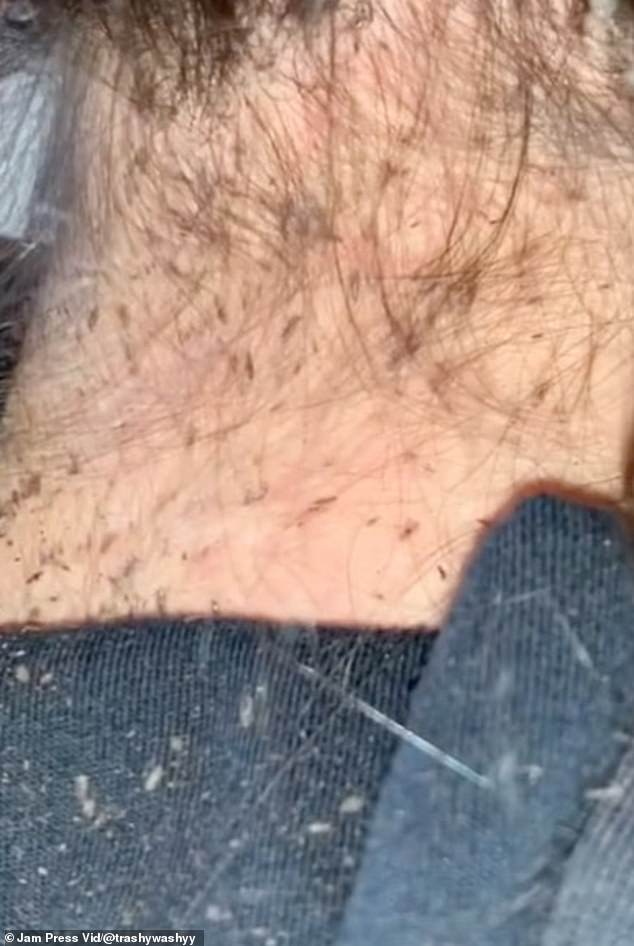 Before starting the treatment, Ms Maroun, queries whether she’ll have to shave the girl’s hair because the infestation is so bad

In the video, which she shared with her 1.7 million followers on TikTok, the hairdresser films the client’s hair and questions whether she will have to shave the girl’s long tresses because the infestation is so bad.

She wrote: ‘We have a massive treatment today so get your hair nets and let’s get into it.

‘So my first thought when a client comes in like this is, “Oh my god. This is a whole dang lot.”

‘My other thought is, “Can we shave the hair?”‘

Giving viewers a closer look at the eggs and the lice, which are seen crawling around next to one another, Ms Maroun adds: ‘Sometimes we do shave hair but I didn’t want to do that to a 13-year-old girl with long hair.’

The post, which has since racked up 74 million views, has shocked viewers to their core, with one commenter saying: ‘Her entire head is alive with them!’

Continuing the treatment, Ms Maroun said: ‘As you can see these lice are just having an absolute rave in her hair, they have just completely taken control.

‘I think there were more lice than strands of hair on her head. 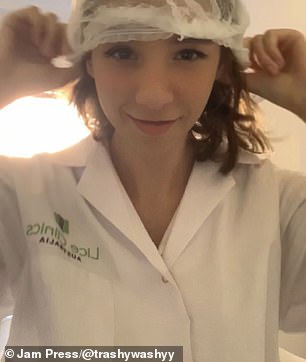 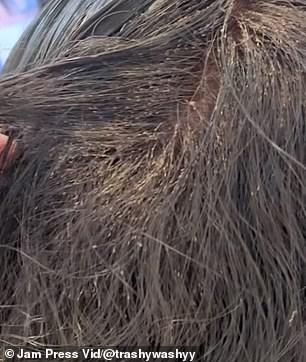 Ms Maroun, (Pictured Left) works at a lice clinic and was left shocked when she had a 13-year-old client (Pictured Right) come in who had ‘more lice than hair strands’, but after three appointments, taking eight hours each, the child was ‘lice-free’

‘There was no more space in her hair so they were crawling onto her face and drinking blood out of her face.’

The lice can also be seen dropping down onto the teen’s clothes and crawling on her body.

The client remains calm and plays on her phone while Ms Maroun gets to work, combing through the hair and scooping out ‘massive wads’ of lice – which she proceeds to pop to kill, using a glass tumbler.

The lice can also be seen on the floor and covering the hairdressers shoes as she works on the hair.

Finally, the child was lice-free after three appointments, which took a total of eight hours to complete.

The hairdresser clarified that it was not a case of neglect – but that the child had special needs and ‘wasn’t able to communicate that she had lice until much later’.

The post went viral, racking up 8.8 million likes and being viewed 74 million times. 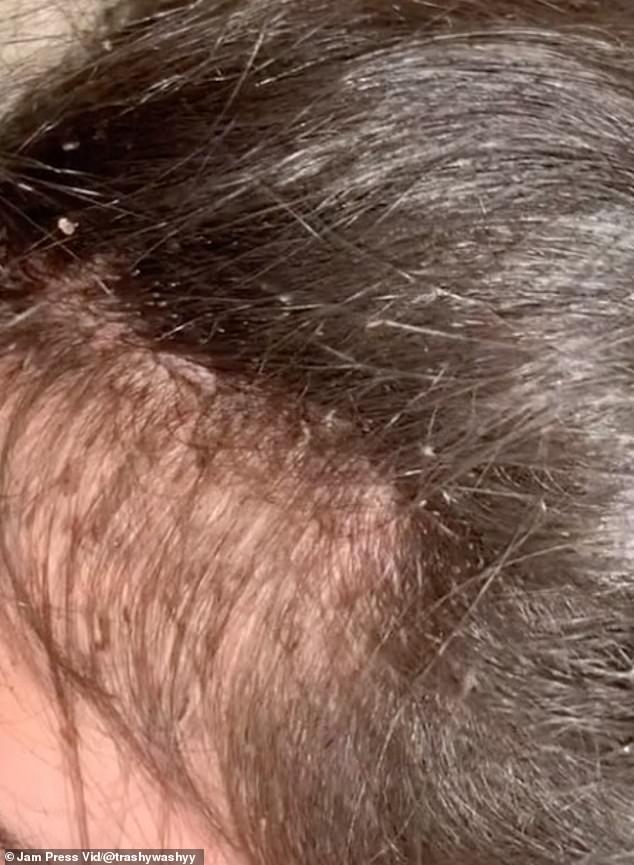 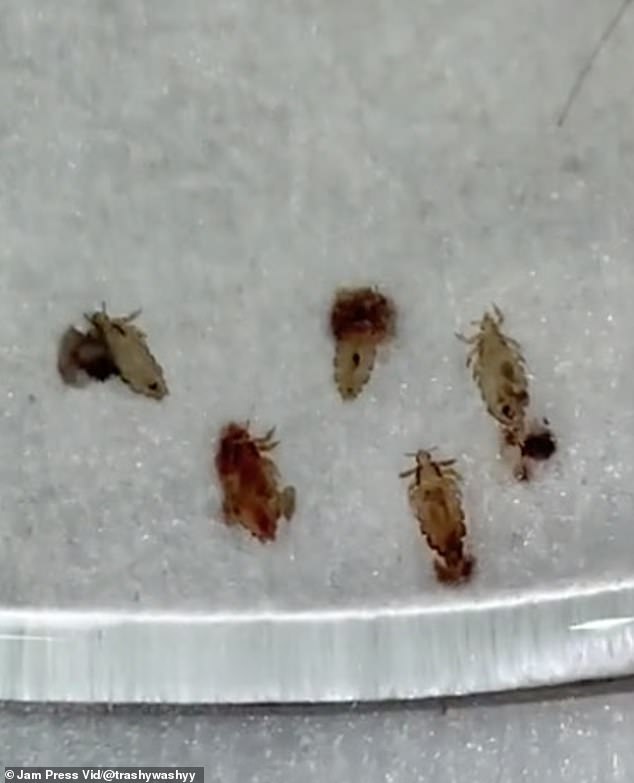 Ms Maroun rolled a glass tumbler over the large parasites, once they were extracted from the client’s hair, and ‘popped’ them to show the blood they were filled with from the girl’s scalp

One person commented: ‘Omg how can you let it get this bad tho.’ [sic]

‘My head is itchy,’ another user said.

Someone else said: ‘Please the fact that she’s just sitting there feeling them all crawl of her is beyond me.’

One person said: ‘Whatever you get paid, it’s not enough.’

‘How so calm! The lice is running around her head!’ added another viewer.

Someone else commented: ‘Christ this poor girl her entire head is alive with them. Glad u were able to help her.’ [sic]

Ms Maroun admitted the situation was ‘overwhelming’ but seeing clear results at the end is what makes her job worth it.

‘It’s really overwhelming because obviously I am sympathetic towards the poor child that is in that situation,’ she told Jam Press.

‘But it’s the prime thing that motivates me to do a good job because I know it means I can make a difference. 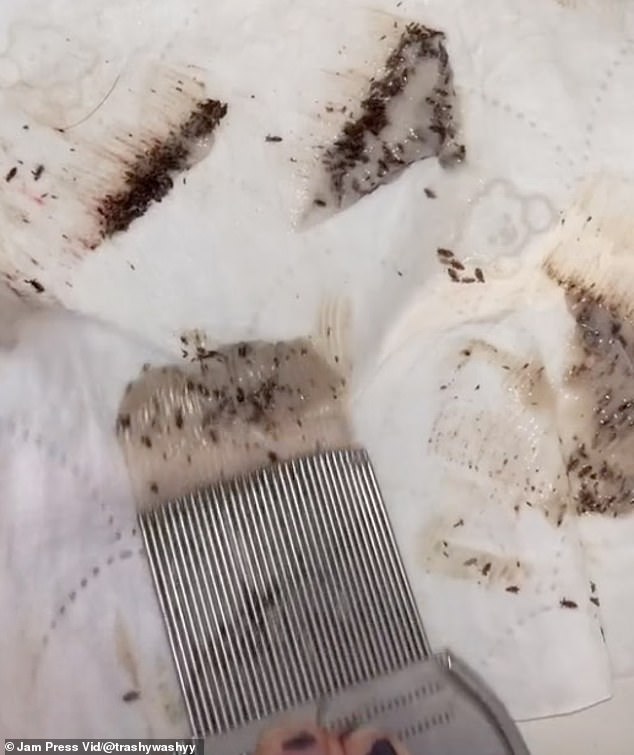 ‘I had a lot of pressure for that case. I understand that lockdown really limited the family’s ability to seek professional help.

‘They were dealing with a case of super lice and the client wouldn’t let her parents do her hair due to over-stimulation, so they left it all up to me.

‘It’s pretty rare to see such severe cases but when it does happen it’s always a shock. I couldn’t believe someone could’ve had them for that long and managed to be okay with it.’

After the treatment, Ms Maroun said the young girl couldn’t stop smiling and touching her hair, and described it as an ‘indescribable relief’.

She said: ‘Being able to see her scalp was a milestone moment but seeing her long hair completely clear was what made the process so worth it.’

2. Head lice infestations happen with direct head-to-head contact. It is extremely rare to get head lice any other way. Less than two percent of head lice comes from the environment.

4. Head lice only live on the human head; not your pets, body or stuffed toys.

5. A head lice infestation is not an indication of poor hygiene. Having clean hair or dirty hair doesn’t influence if you get lice, it’s just bad luck!

6. Once one person in a household gets lice, there is a significant chance that someone else will become infested.

7. Head lice are not dangerous. They do not carry or spread any diseases they’re just a nuisance.

About Last Night: my boyfriend is a party animal, I’m not

ICYMI, Killing Eve Is Back With Another Season of Binge-Worthy Style