Predictions of the ‘death of the wallet’ are proving premature in Middlesbrough, where more than nine out of ten people still carry cash.

A survey found 92 per cent of residents in the Teesside town say they always have cash when they leave home, compared with the national average of just under 73 per cent.

The study into cash machine habits – to coincide with the 55th anniversary tomorrow of the UK’s first ATM at Barclays Bank in Enfield in 1967 – found only 46 per cent of people in Cardiff carried cash, the lowest level in the country.

Cambridge (91 per cent), Exeter (90), Swansea and Newcastle (both 88) completed the top five cash-carrying locations. Newport (50 per cent), Dudley (57), London (58) and Leicester (59) joined the Welsh capital as the least likely to use notes or coins.

The poll of 2,000 was run by e-money firm Transact Payments. 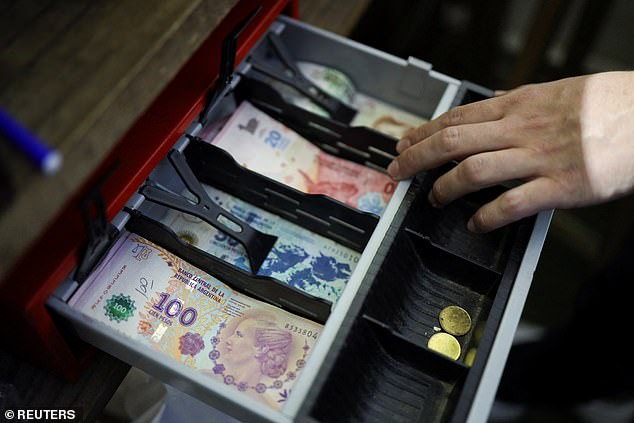 As society becomes increasingly cashless, thanks to contactless payments via phones, plastic and even watches, the numbers carrying money is plummeting.

Since 2010, cash payments have fallen by more than 70 per cent with five out of six payments made using ‘non-cash’ methods, although around five million Britons are still ‘heavily reliant’ on notes and coins.

A spokesman for Transact Payments said: ‘Despite a sharp rise in the adoption of card and digital payments due to the pandemic, consumers also believe that cash is here to stay and that its death has been greatly exaggerated.’

Its chief executive Kriya Patel added: ‘Our research reveals how the UK is still highly reliant on more traditional methods of banking, which is at odds with an expectation that Britain will turn into a ‘cashless’ society very soon.

‘Critically however, it also uncovers a deep worry amongst a sizeable majority of the public about the negative impact that becoming a cashless country would have on elderly family and friends.

‘The wholesale move away from physical coins and notes could have potentially adverse effects beyond the elderly, including lower income workers, rural communities, and more.’

Celebrities at the Super Bowl: Beyonce, Jay Z, Bennifer and more in the stands