The Thai boys evacuated from the flooded cave have paid their respects to the former Navy Seal diver who died trying to save them.

The 12 youngsters and their football coach were not told that Saman Kunan had drowned ahead of their dramatic rescue from the Tham Luang cavern just days ago.

His dramatic death convinced the Thai authorities for the need to call back the British cave-diving experts to lead the ‘mission impossible’ to save the boys.

But now doctors have decided the boys, aged between 11 and 16, are well enough to learned of the former Thai Navy Seal’s personal sacrifice for them. 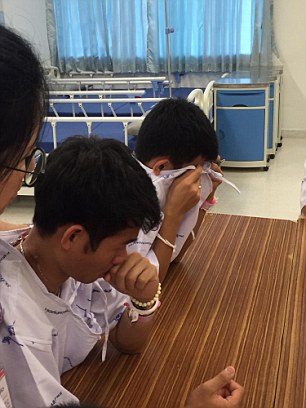 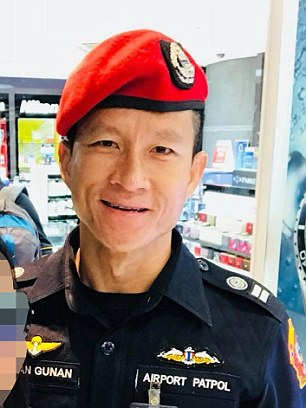 Ekkapol Chantawong (left), the 25-year-old football coach who led the ill-fated outing into the cave, wipes away tears with a clenched fist after learning about Saman Kunan’s (right) death

The youngsters bowed their heads in respect to the brave former navy diver and posed with a drawing of former Petty Officer Kunan at their hospital ward where they are being treated for malnutrition, pneumonia, ear infections and exhaustion.

One boy covers his face as he cries.

Ekkapol Chantawong, the 25-year-old football coach who led the ill-fated outing into the cave, wipes away tears with a clenched fist.

‘All of the boys who were evacuated from the cave have been informed of the death of one of the rescuers,’ Dr Jesada Chockbamrungsuk, who is in charge of their treatment announced.

‘All of the boys cried and were in tears when they found out.

‘The survivors expressed their thanks to the Thai Navy Seal by bowing to his picture. 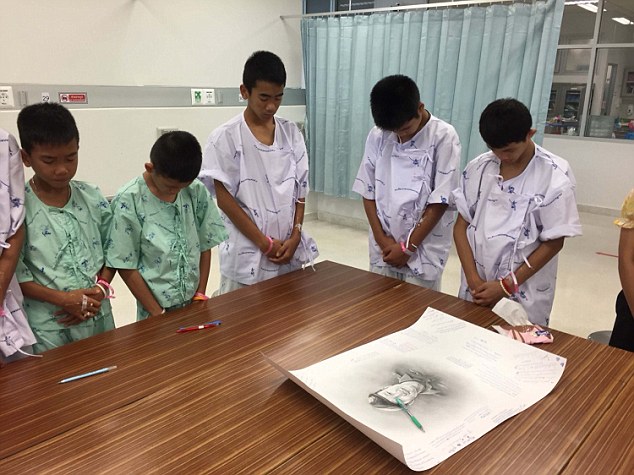 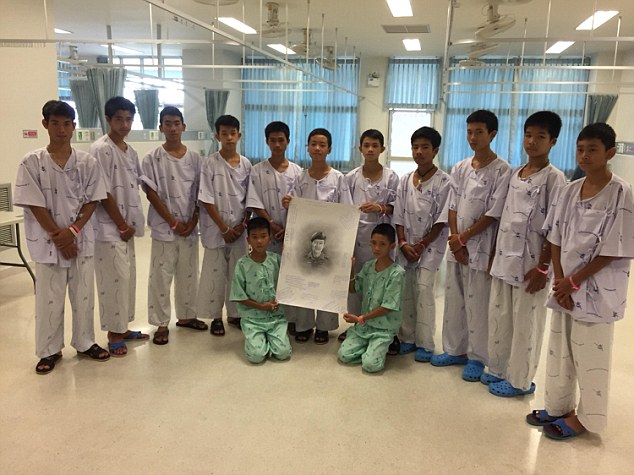 ‘The boys all promised to be a good person and lead a good life to honour him.’

He added: ‘We told them about the death of Navy Seal Kunan as part of the process of preparing the boys to go back home and to lead normal lives.’

Hundreds of mourners paid their respects to the 37-year-old at a special ceremony attended by high ranking military officials and a representative of the king at the Wat Ban Nong Khu temple in his home town of Chatuphak Piman yesterday (Sat).

Kunan was awarded the Knight Grand Cross (First Class) of the Most Exalted Order of the White Elephant medal and posthumously promoted to Lieutenant Commander.

Dressed in their hospital robes the youngsters can also be seen enjoying a sit-down meal together. 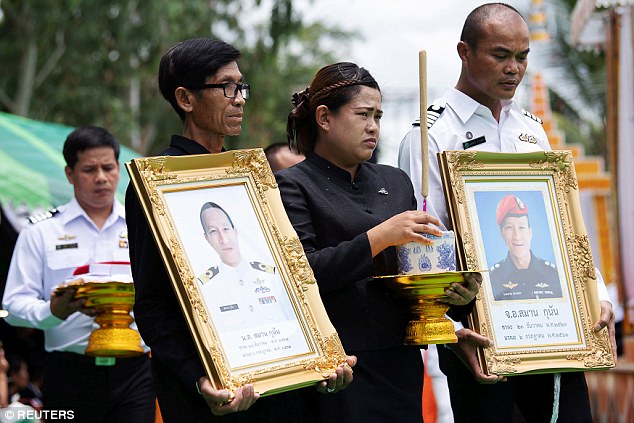 Family members hold pictures of Samarn Kunan, a former Thai navy diver who died working to rescue a young soccer team trapped for days in a flooded cave, during his funeral 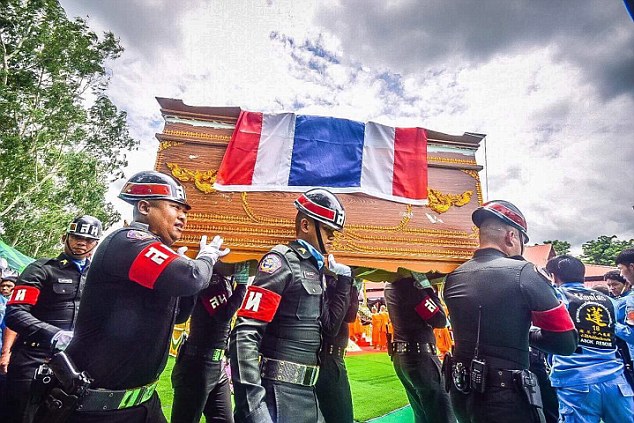 Crowded around a table the boys are eating traditional Thai dishes of rice, pork and soup.

The 12 boys and their football coach will watch a recording of the World Cup final which takes place on Sunday, but not the live broadcast.

‘Given that the final will be broadcast quite late our time, and we want the boys to rest and not to be looking at screens too much, we will probably record the final and show it to them later,’ said an official the Chiang Rai Prachanukroh Hospital.

France play Croatia in the World Cup final in Moscow on Sunday, at 10pm in Thailand.

FIFA had invited the boys and their coach to attend the final in Moscow, but they can not go for medical reasons.

The 12-member ‘Wild Boars’ team and their coach spent more than two weeks trapped inside a flooded cave in the northern province of Chiang Rai.

They have been recovering in hospital since they were rescued over three days last week and will discharged on Thursday.

The boys, aged 11 to 16, and their 25-year-old coach had planned to explore the Tham Luang cave complex for about an hour after soccer practice on June 23. 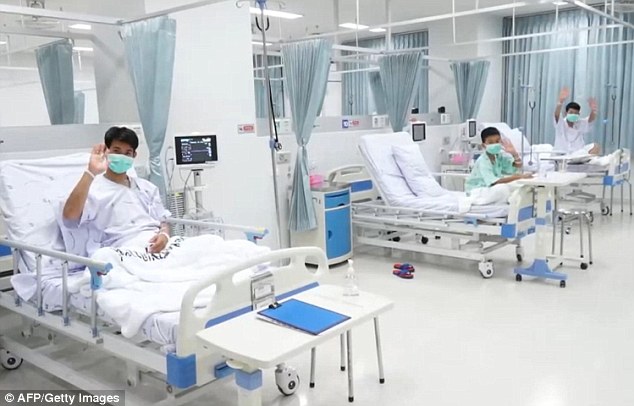 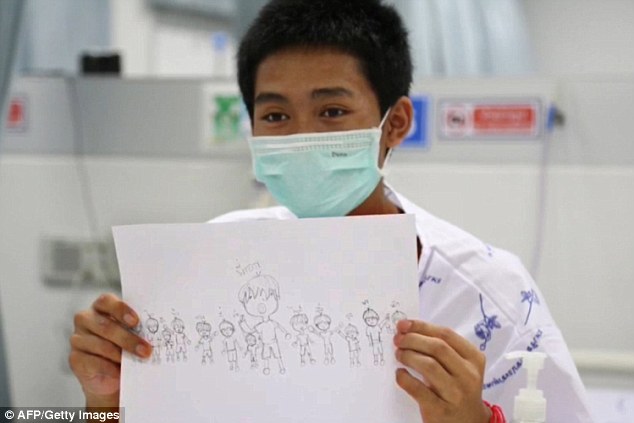 A hospital official said the 12 boys and their football coach will watch a recording of the World Cup final which takes place on Sunday, but not the live broadcast

But a rainy season downpour flooded the tunnels, trapping them.

Two British divers found them on July 2, squatting on a mound in a flooded chamber several kilometres inside the complex.

Rescuers then had to work out how to get them out through the flooded tunnels.

All 13 were brought to safety in a perilous rescue organised by Thai Navy SEALs and an international team of cave-diving experts.

The rescue was greeted with joy by some of the world’s biggest football clubs.

About 4,000 volunteers were on Sunday taking part in a clean-up of the area around the Tham Luang cave.

A park area around the mouth got trampled by the hundreds of rescuers, and media workers, who flocked to help with the mission and to report on it.

Authorities have closed the cave for now but hope to reopen it later as a tourist attraction – with sufficient safeguards in place to make sure no one gets trapped again.

H.E.R.’s ‘Fight For You’ Nominated For Best Original Song At 2021 Oscars