BANGKOK (Reuters) – Pupils at more than a dozen Thai high schools raised three-finger “Hunger Games” salutes during the national anthem on Tuesday in a sign of spreading support for student-led anti-government protests. 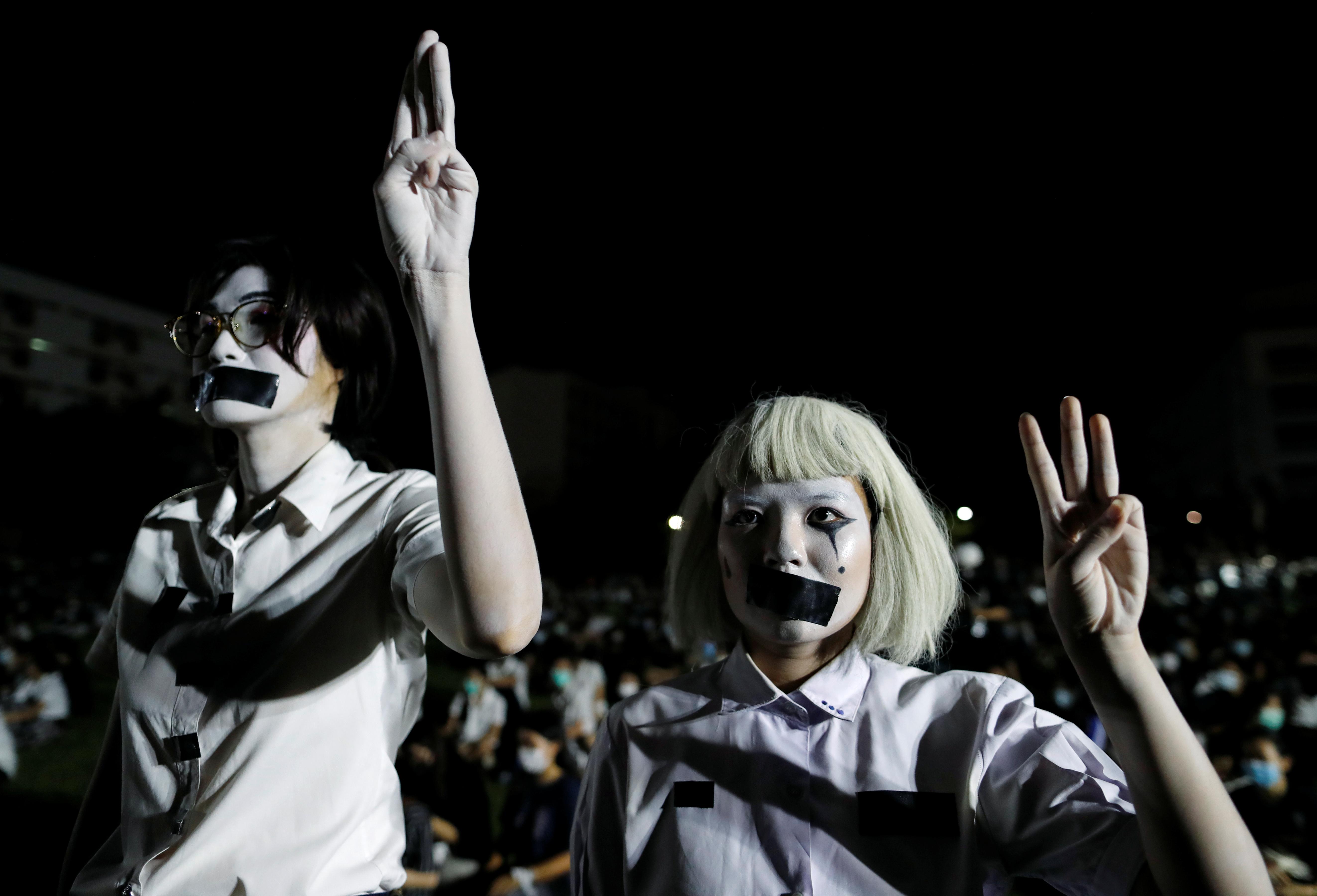 Demonstrations that began on university campuses have taken place almost daily since mid-July in an increasing challenge to the ruling establishment in the Southeast Asian country that has long been dominated by the army and the monarchy.

High school protests during morning assemblies began in at least eight schools on Monday. The three-finger salute has been a symbol of calls for democracy since Prime Minister Prayuth Chan-ocha first took power in a 2014 coup.

Some students also wore white ribbons to show their support for protesters, who seek Prayuth’s departure, a new constitution and an end to the harassment of activists. Some students have also called for reforms to the monarchy, once a taboo subject.

“I want to show that I don’t like dictatorship and want true democracy,” said one 17-year-old student who joined the protest at a government school on Monday and said she did not want to be named for fear of reprisals after pressure from teachers.

The school did not respond to a Reuters request for comment.

Education Minister Nataphol Teepsuwan said at an educational fair in Bangkok on Monday that the students had the right to express themselves and should not be punished, but also warned that there was a limit to how far they should go.

Prayuth told reporters he was willing to listen to the students but questioned the motives of some.

“I heard from some students that those that don’t want to take part in these actions gets bullied into doing it,” he said.

Protesters accuse Prayuth of holding on to power unfairly after elections last year under rules drawn up his junta. He says the elections were fair.

Apart from the political demands, some pupils complain of a school system which emphasises obedience and tradition, from lining up daily for the national anthem to strict rules on uniforms, haircuts and behaviour.

“Students see politics through the lens of school life that lacks democracy and has many highly authoritarian elements,” said Prajak Kongkirati, a political scientist at Thammasat University in Bangkok.

“What we are witnessing is the beginning of a social revolution.”

A hashtag that translates as #WhiteRibbonAgainstDictatorship was used nearly 1 million times on Twitter while others trending included #ThreeFingersForNationalAnthem.

Videos shared on social media show some teachers trying to stop students from giving the salutes, but in other schools teachers have joined in raising their hands.

Increasing support for the protest movement was evident in Bangkok on Sunday when more than 10,000 people joined the biggest demonstration for years.

High school students said they were planning further protests on Wednesday, including one at the Ministry of Education.

Opinions Are Split On Whether Canada Will Target U.S. Pharmaceutical Industry To Retaliate Against Tariffs