Somewhere lost in the talk of most of the highest-rated rookie quarterbacks failing to fulfill their massive expectations in Year 1, a pretty clear theme has emerged.

The 2021 NFL draft has a chance to be considered a whopper of a class. As in, among the best talent groups we’ve seen in recent years, and perhaps beyond.

Time will tell, of course, and it’s far too soon to cast any kind of final judgment. But in the meanwhile, can we take a minute to discuss the non-QB rookie riches we’ve been blessed with this season?

Five quarterbacks went in the top 15 selections. Here are the other 10 picks in that range:

5. Bengals WR Ja’Marr Chase — Set records for most yards by Bengals receiver ever; most receiving yards (266) by any rookie in a game

8. Panthers CB Jaycee Horn — Started the first three games (one INT) at age 21 before a broken foot ended his season

12. Cowboys LB Micah Parsons — One of the most dominant rookie defenders in recent memory, with 13 sacks, 3 forced fumbles 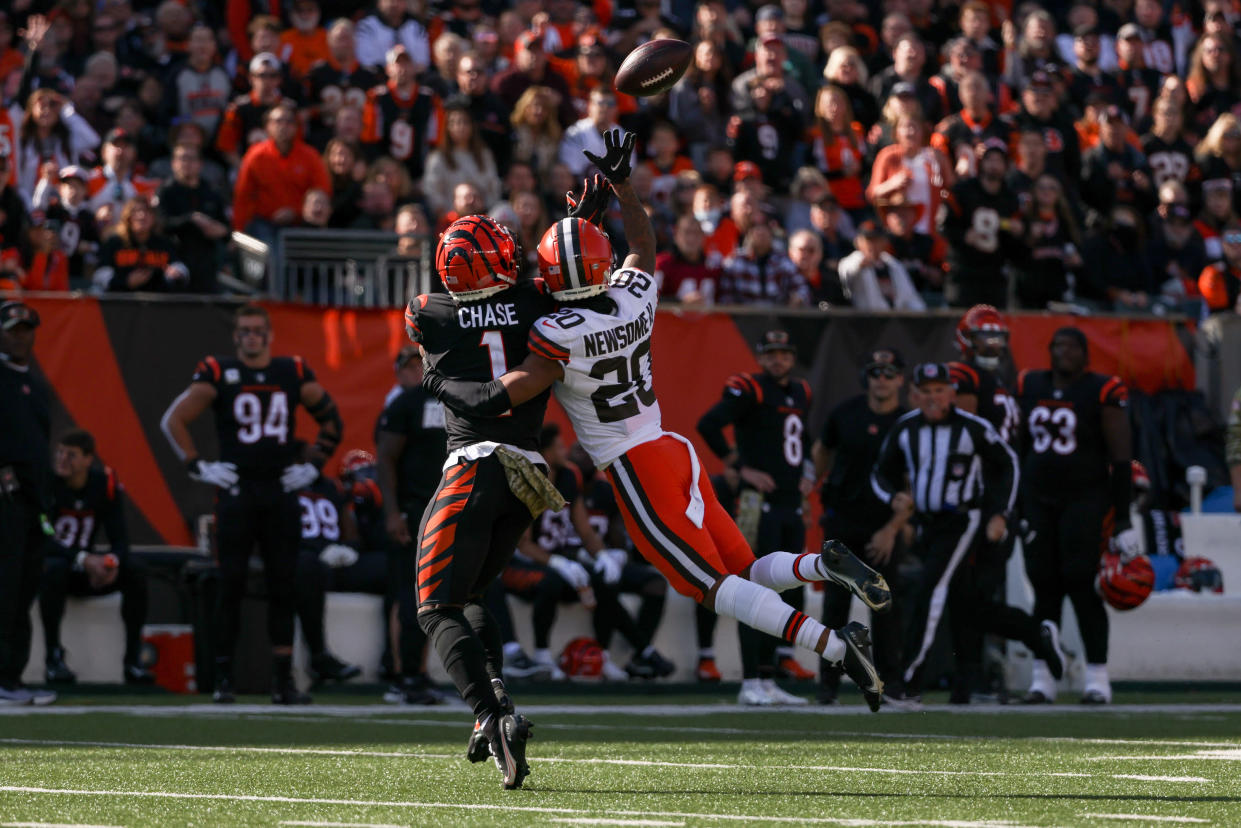 And that was just the top of Round 1. The remainder of the 2021 draft bore some impressive talent:

Although some positions clearly were stronger than others, this draft was loaded from top to bottom. And we mean that quite literally — even Mr. Irrelevant, Buccaneers LB Grant Stuard, led the defending champs in special-teams tackles and forced fumbles.

As one talent evaluator told us, “I’ve been (in college scouting) since 2005, the year after the Eli-Ben-Philip Rivers class. I think this last (draft) has a chance to end up the best. Not saying it is already. But it has a chance. But so far, it's not because of the quarterbacks.”

No slouch was the class of 2016 — Dak Prescott, Jalen Ramsey, Joey Bosa, Derrick Henry, Michael Thomas, Tyreek Hill, Chris Jones, Ronnie Stanley, Laremy Tunsil and others. It too was a smorgasbord of talent.

And in a way, the 2016 and 2021 classes have a common thread: the uneven quarterback play. The first two picks in the 2016 classes, Jared Goff and Carson Wentz, both were traded this offseason after signing monster extensions with the franchises that drafted them.

Both have had their high points. Wentz likely was leading the MVP race in 2017 before suffering a torn ACL the year the Eagles won the Super Bowl. Goff led the Rams to the Super Bowl the following season, losing to the Patriots, and put up some big numbers in Sean McVay’s system.

But both were dealt for a reason. Goff’s strong finish to the season has put a sheen on his first year in Detroit, although Wentz’s nightmarish finish with the Colts has left his immediate future in doubt.

Neither has been as good to date as Prescott, who has a chance to make the Super Bowl this season and whose comeback from a devastating ankle injury in 2020 has been one of the feel-good stories of the season.

The picks between Wentz and Prescott, however … avert your eyes. Third-rounders Cody Kessler and Jacoby Brissett have carved out nice careers as backups. But there’s not too much we can say to sugarcoat the careers of the 2016 class’ big QB misses — Paxton Lynch, Christian Hackenberg and Connor Cook.

Lynch last took an NFL snap in 2017. Hackenberg, the 51st overall pick, never took an NFL snap — one of the biggest busts imaginable. And Cook’s best known for starting the Raiders’ playoff loss in Houston out of desperation; it would be his only career start.

Quarterbacks coming up short so far, but promise remains

We can’t hide the elephant in the room. Through one season, the performances of the first five quarterbacks drafted last year have been — on the whole — disappointing.

Mac Jones, the fifth QB drafted, helped lead the New England Patriots to the playoffs. He was good to very good at times, especially for a rookie and especially for the demanding Patriots. Following in Tom Brady’s footsteps is no easy chore, either.

Jones deserves credit for his accuracy (67.6% completions), his relative productivity (3,801 passing yards and 22 TDs for a team that totalled 2,890 pass yards 12 TD passes a year ago) and his poise. But he also appeared to hit the proverbial rookie wall down the stretch, completing only 60% of his passes for 951 yards with a 6-5 TD-INT ratio in the final five games, leading to questions about how much he can truly accomplish in the playoffs.

But Jones was hardly the class’ problem. Neither was Houston Texans rookie Davis Mills. Despite being QB8 in this past draft, he started 11 games this season — the same number he started in his entire college career — and finished second among the rookie QBs behind Jones in TD passes (16) and completion percentage (66.8), plus third in passing yards (2,664). 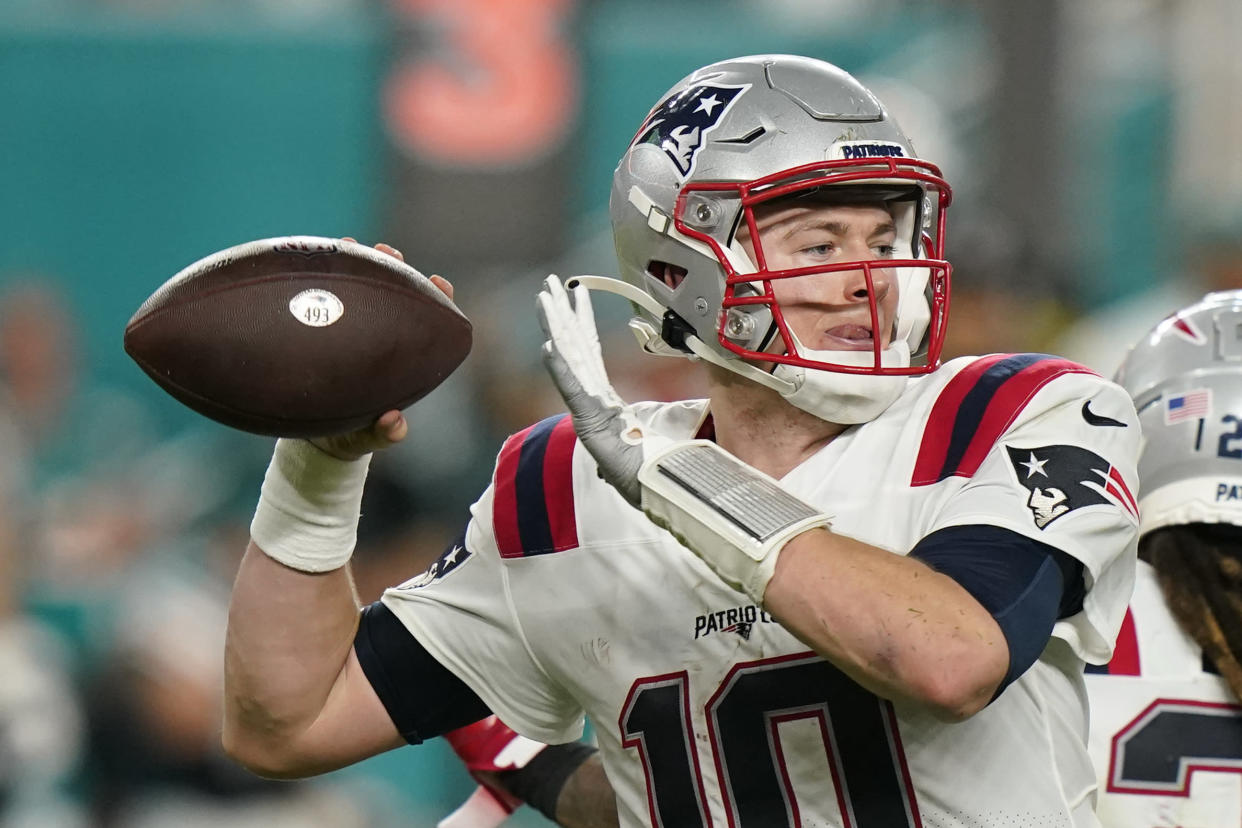 It’s at the point where the Texans seriously must consider giving Mills a shot to compete for the starting role in 2022. He at least looks like a steal compared to the quarterbacks drafted three spots (Kyle Trask) and one spot (Kellen Mond) ahead of him, at the start of Round 3. Given a chance to see more of Mond with Kirk Cousins out, former Vikings coach Mike Zimmer didn’t seem too interested in the idea.

But for a draft that featured quarterbacks going 1-2-3 for only the third time ever, it was mostly a disappointing first year for that trio. Nos. 1 and 2 overall picks Trevor Lawrence each started in Week 1, and each were thrown to the wolves early.

Lawrence started all 17 games, enduring losing streaks of nine and five games and leading the NFL in interceptions. His Week 18 performance, leading the Jaguars to a shocking upset over the playoff-hopeful Colts, was the perfect silver lining to a frustrating year. And perhaps only so much blame should be put on his head following the Urban Meyer fiasco.

But was he a Year 1 disappointment after being touted as one of the best draft QB prospects since Andrew Luck? Absolutely.

So too was Wilson. It was clear early that his freewheeling style was not going to bear the same fruit immediately as it did during a breakout season for BYU (against a pretty soft slate of defenses).

His season overall was a curious study. He finished with a completion percentage of 55.6, had 13 TDs (nine passing, four rushing) to 12 turnovers (11 interceptions, one lost fumble) and took the third-most sacks of any quarterback in the NFL, despite missing parts of five games with injury.

Yet there’s a sense that he finished a long season as a better QB than he was at the start of the year, even as the Jets’ receiver and offensive line positions were hit hard by injuries. Still, you could have said the same thing about Sam Darnold in his rookie season of 2018 with the Jets, and we know how that turned out.

Justin Fields, the fourth QB drafted, also had an up-and-down rookie season for the Chicago Bears. Of course, it’s hard not to have been that way considering his strange ascension to the starting role, along with two interruptions after earning it.

Like Wilson, Fields took way too many sacks — an unsightly 11.8%, the highest rate in the NFL among qualified QBs — and completed less than 60% of his passes. Fields also was far too prone to fumble (12, five of them lost) and too inconsistent as a thrower.

Still, there were enough encouraging moments, such as the second half at Pittsburgh or his final game of the season against the Vikings, despite taking a loss. Saddled with an ankle injury and later stuck on the COVID list the final few weeks of the season, Fields wouldn’t play the final three weeks. He remains a promising but unfinished product for a new head coach to try to craft into a star.

The same questions remain, with a much smaller sample size, for Trey Lance and the 49ers. For now, they’re riding Jimmy Garoppolo’s solid finish into a huge playoff game against the Dallas Cowboys. The results of that game could impact Garoppolo’s future in San Francisco, although some believe it’s only a matter of time before Lance is handed the keys to Kyle Shanahan’s offense in 2022.

We didn’t see enough in Lance’s 179 regular-season snaps to make any kind of judgment on the 21-year-old’s future. But at least there were some encouraging signs in his two starts (six games) to think that the 49ers didn’t waste a high pick, even though it was one they paid a pretty penny to trade up for.

Right now, the story of the 2021 NFL draft class is that it has to be considered one of the better first-year returns of any group we’ve had in recent years outside of the QBs. Chase, Parsons, Slater and Pitts displayed some real star power. Another dozen or more non-QBs possess star potential. Beyond that, there’s respectable depth and promise.

But for this class to join some of the all-time great drafts, the quarterbacks eventually must hold up their end of the deal. In a few years’ time, we should have a pretty good idea where to fairly rank the 2021 NFL draft properly.

Spoilers: Sienna is destroyed as she admits Liberty is Faith's mum in Hollyoaks