THE five areas of the UK where coronavirus cases are falling have been revealed.

Researchers from the ZOE Covid Symptom Study app say that half of the regions in Britain are seeing infections decreasing. 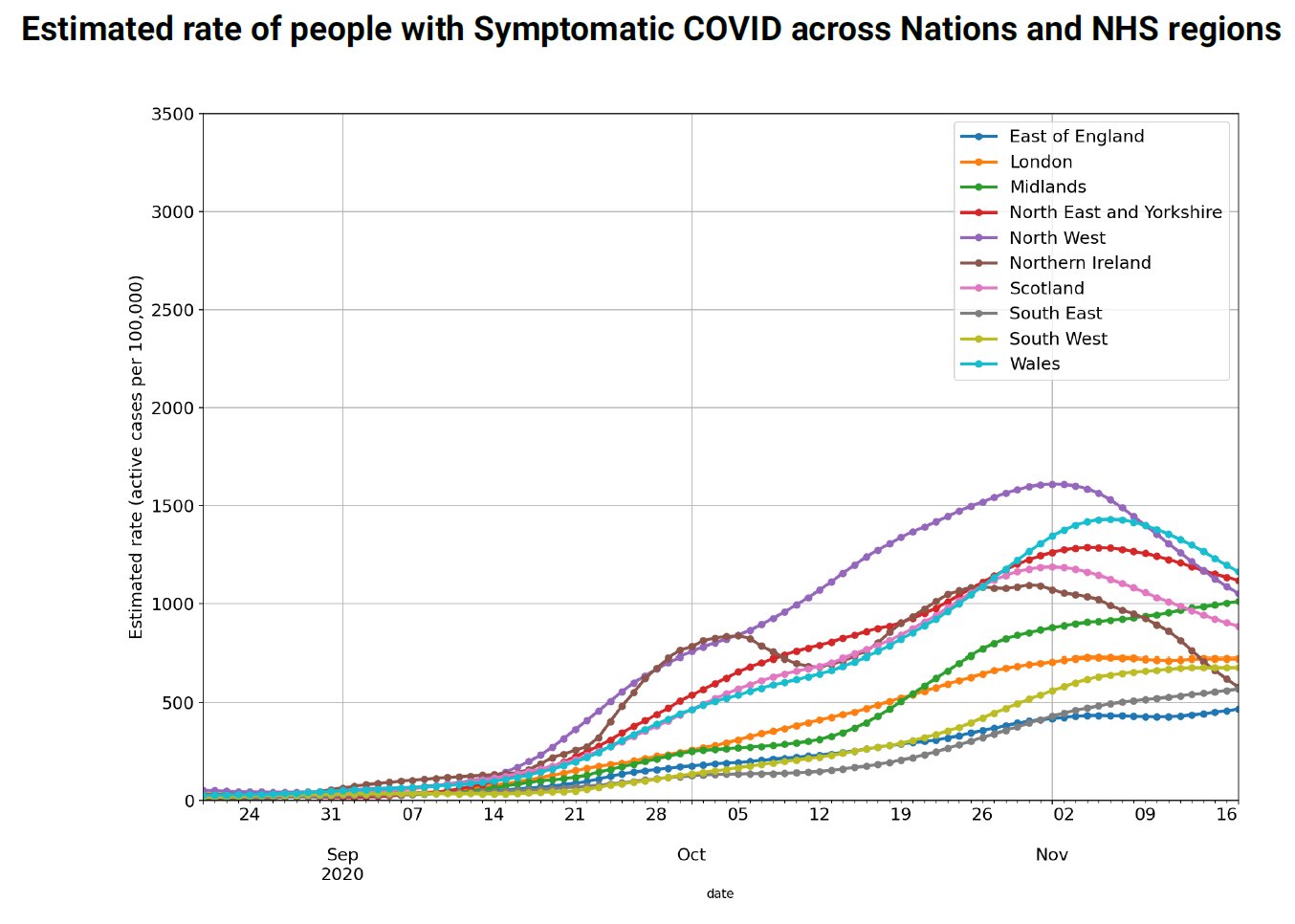 This includes previous hotspots such as the North West of England and North East and Yorkshire, where parts were under strict Tier 3 restrictions before the national lockdown came into effect on November 5.

But the number of number of symptomatic people in the population has gone up in the remaining five regions, according to app experts.

Professor Tim Spector, who is leading the study, shared the latest app data on Twitter today showing a slight rise in the East of England, South East, Midlands, London and the South West.

He also said the UK is continuing to see around 35,000 new cases per day – a similar figure reported last week, suggesting cases may have levelled off.

Posting on Twitter today, Prof Spector said: "In UK today similar picture with 35k cases per day – but this picture of prevalence (number of symptomatic people currently in the population) shows 5 regions decreasing and 5 increasing – showing how the epidemic spreads over time- regionally."

On Friday, the app data – which is based on a million weekly users self-reporting symptoms and positive swab tests – revealed the R rate was below 1 across the country. 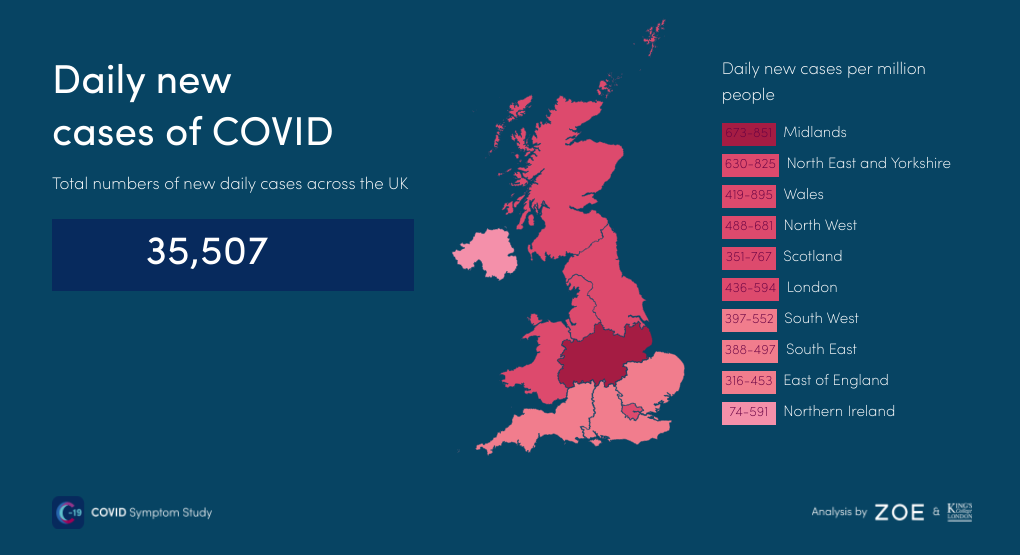 It also suggested the crucial value in the North West is at 0.8 – the lowest in the country, despite being the Covid epicentre just weeks ago.

New cases in Scotland have also declined with 54 new cases per 100,000 with an R rate of 0.9, according to the most recent data on Friday.

It comes as First Minister Nicola Sturgeon is to announce whether the toughest Covid restrictions are to be imposed in the west of Scotland, which is currently operating a tier system.

Prof Spector tweeted: "Hard to see why @scotgov is concerned their tiered system in Scotland is not working- as they seem to be doing better than the other UK nations." 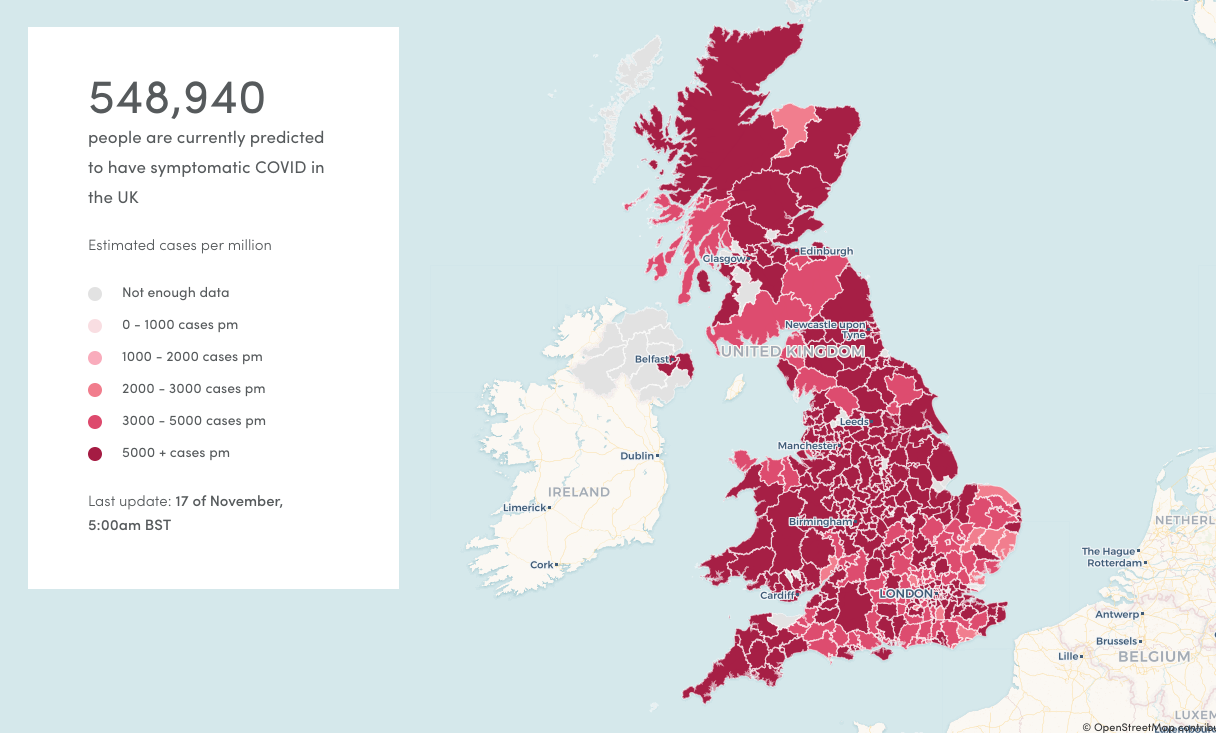 Meanwhile, he warned that cases are on the rise in other areas which is causing concern – particularly the Midlands.

The graphs suggest the wave in the Midlands is around two weeks behind a similar wave in North West, according to Prof Spector.

Speaking last week, he said: "A caution is that rates are still increasing in the Midlands for reasons that are unclear.

"We aren’t out of trouble yet, but with numbers falling and the news of a vaccine, it feels like the end is in sight.”

The ZOE Covid Symptom Study figures are based on around a million weekly users self-reporting symptoms and positive swab tests.

Prof Spector's snapshot today is based on data from October 30 to November 13, which is much more up-to-date than other official figures.

The latest official Government data suggests there was an average of 47,700 new cases of Covid per day in England between October 31 and November 6.

Figures from the Office for National Statistics (ONS) published on Friday showed a drop from the previous week when there was an estimated 45,700 new cases per day.

It showed the rate of new infections has increased in recent weeks but remained at around 50,000 new cases per day.

Positivity increased in the South East, South West, East Midlands and the North East – whereas some other regions appear to have levelled off during this time period, they said.

The highest Covid-19 infection rates remain in the North West, and Yorkshire and The Humber, despite the low R rate prediction from the app.

Secondary school children, older teenagers and young adults are still seeing the highest positivity rates, although it's started to fall, the ONS said.

The figures do not include people staying in hospitals, care homes or other institutional settings.

The Government will decide next week how to end the current lockdown with scientists warnning a tougher tier system is needed until vaccines can drive back the Covid-19 pandemic.

Susan Hopkins, medical director of Public Health England (PHE) and chief medical adviser to NHS Test and Trace, said ministers would have to look at "strengthening" the tier system.

Tier 1 restrictions that covered huge parts of England had "very little effect", she said, adding that even Tier 2 only worked in some areas.

Documents released last week from the Scientific Pandemic Influenza Group on Modelling (SPI-M), which reports to the Scientific Advisory Committee for Emergencies (Sage), said there was a "clear effect" on infection rates from strict Tier 3 interventions but "much less from Tiers 1 and 2". 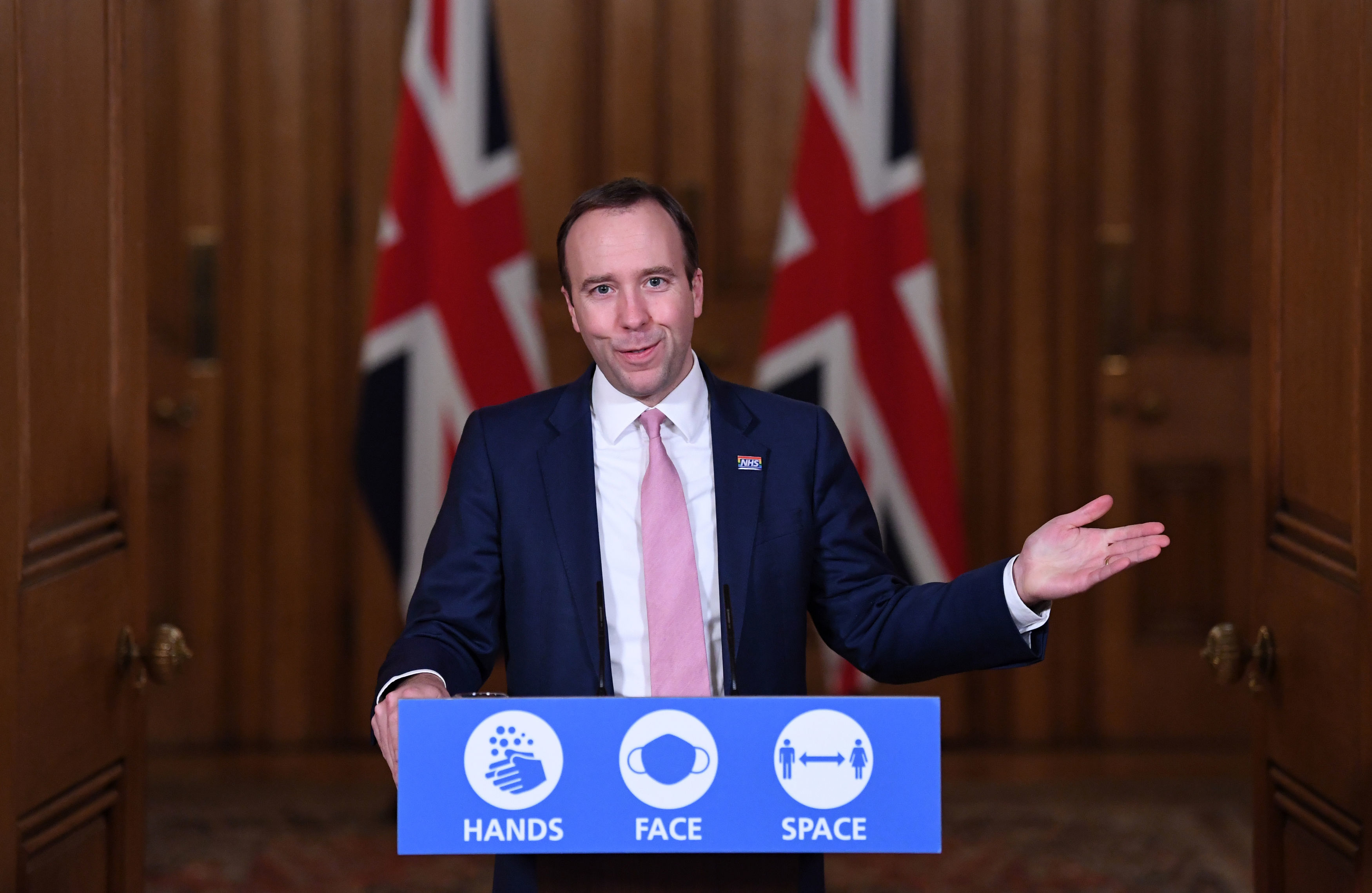 SPI-M believe infections will rise at the same rate as before if the same three-tier system is brought back in on December 2.

At a a Downing Street press conference last night, Matt Hancock said it was "too early for us to know" whether coronavirus cases will be brought down sufficiently to ease the lockdown.

But he added: "We hope to be able to replace the national lockdown with a tiered system similar to what we had before."

She said Tier 3, and especially Tier 3 with further restrictions in the north, had had an effect in reducing cases.

Of Tier 2, which saw a ban on meeting people from other households indoors, including in pubs and restaurants, Dr Hopkins said it seemed to hold cases down in some areas but "not so well in others".

She added: "We see very little effect from Tier 1 and I think when we look at what tiers may be there in the future, we will have to think about strengthening them in order to get us through the winter months until the vaccine is available for everyone."

It comes as the Government announced a further 213 people had died within 28 days of testing positive for Covid-19 as of Monday, bringing the UK total to 52,147.

Islands like Canaries, Ibiza & Mallorca could be added to safe travel lists