The biggest cruise ship in the world sets sail: It has an ice rink and 19 swimming pools, room for 9,200 people and is longer than London’s Shard is tall

She is a true behemoth of the ocean; a city on water longer than the Shard is tall with her own Central Park, ice rink, casino, 19 swimming pools, 20 restaurants and 11 bars.

Weighing in at 236,857 tons – five times that of the Titanic – the Wonder of the Seas, the world’s biggest cruise ship, set sail in spectacular style on Friday for her maiden seven-day voyage from Fort Lauderdale, Florida, to the Caribbean.

The record-breaking 362 metre (1,188 ft) long Royal Caribbean liner carries 6,988 passengers and 2,300 crew… and enough beer to fill each of her swimming pools twice over.

But is bigger always better? Those on-board definitely think so. Speedy wi-fi has allowed passengers to fill social media channels with comments. 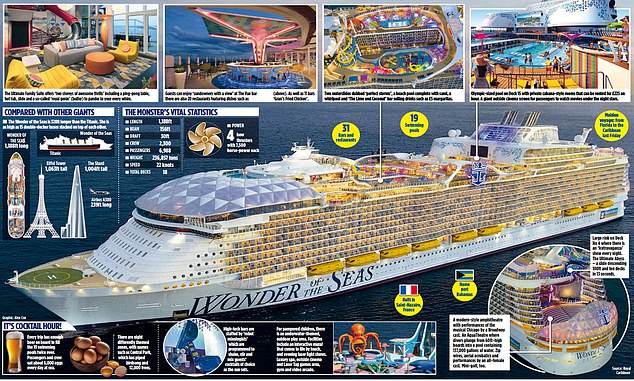 Weighing in at 236,857 tons – five times that of the Titanic – the Wonder of the Seas, the world’s biggest cruise ship, set sail in spectacular style on Friday for her maiden seven-day voyage from Fort Lauderdale, Florida, to the Caribbean

One woman holidaymaker said: ‘It’s hard to believe you are even on a ship. It’s a city on the water. There is everything you could ever want. There’s no reason to ever get off.’ Another quipped: ‘We’re going to need a bigger ocean!’

The monster ship has 18 decks – 16 for passengers. For propulsion, she uses three 20,000 kilowatt diesel-electric thrusters under the stern and four bow thrusters, each with 7,500 horsepower, allowing her to cruise at 22 knots (25 mph).

Built over three years at a cost of more than £1 billion in Saint-Nazaire, France, she was originally set to launch in China last year – until the pandemic put paid to that. A source said: ‘Restaurants have been renamed and signs in Mandarin have been changed to English. She will sail around the Caribbean before switching to European cruises this summer.’

The ship includes a Boardwalk based on the famous US Coney Island attraction, lined with restaurants offering Italian, French and German food alongside American staples like a hot-dog and pizza joint. There is also a full-sized carousel and Vegas-style casino.

Another sprawling deck holds Central Park, packed with more than 20,000 plants and trees. On the Royal Promenade, cocktails are shaken but not stirred by robots in the Bionic Bar.

And the Rising Tide Bar is a moving platform where guests’s seats glide up and down between the Promenade on Deck Five and Central Park on Deck Eight so they can enjoy the best views of the sunset while sipping on cocktails.

Entertainment includes the musical Chicago performed by a Broadway cast, an AquaTheatre where high-divers plunge from 60ft boards into a swimming pool and nightly ‘icetravanganzas’ in the indoor ice rink.

VIP guests enjoy private suites which come with a ‘royal genie’, or butler, who caters to every whim. The ten-person Ultimate Family Suite has a two-storey slide from the bedroom to the living room, meaning even the most lethargic teenager has no excuse for running late. 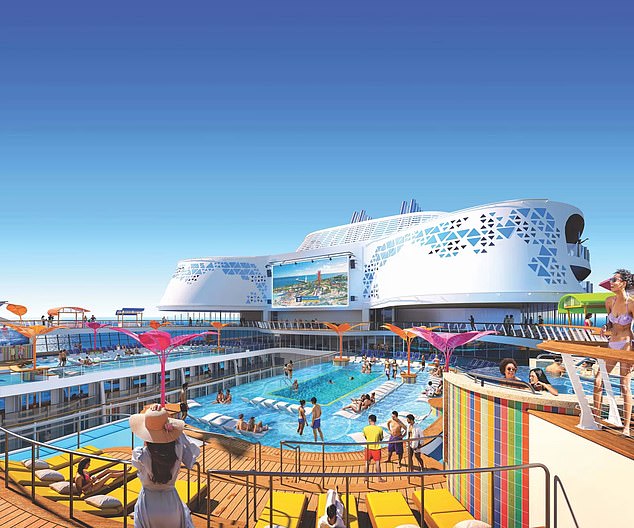 VIP guests enjoy private suites which come with a ‘royal genie’, or butler, who caters to every whim

There are clubs for children of all ages including Playscape – described as ‘an onboard wonderland for kids’ – which has a slide that lifts riders up a near vertical wall on a raft before flinging them back down with a giant splash.

Then there is Ultimate Abyss, a 100 ft slide which plummets from Deck 16 to Deck 6 in 13 seconds.

Royal Caribbean claims bookings are back to pre-pandemic levels. Chief executive Jason Liberty said: ‘We are eager to move forward this year. We expect 2022 will be a strong year as we bring the rest of our fleet into operations and approach historical occupancy levels.’

Will Rick Die on ‘The Walking Dead’? Chandler Riggs Weighs In

Kylie Jenner May Already Be Pregnant Again With Baby No. 2, ‘Life & Style’ Reports