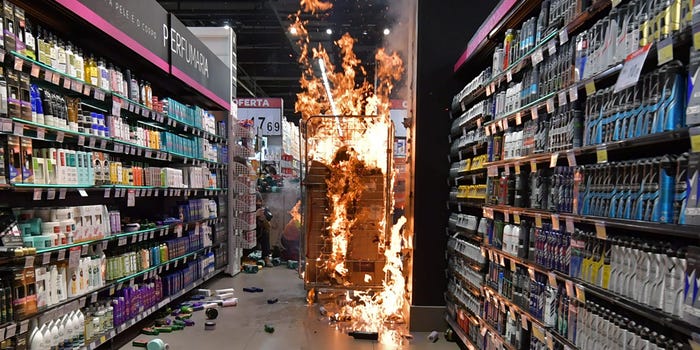 White security guards beat a Black man to death at a grocery store in Porto Alegre, Brazil, on Thursday, in a case highly reminiscent of George Floyd's in the United States in May, according to multiple media reports.

The beating occurred after a supermarket employee called security on Joao Alberto Silveira Freitas following a dispute. Freitas was punched and knelt on by the security guards outside the store, The Guardian reported.

The incident happened the day before Black Consciousness Day, a recognized holiday in Brazil intended to shed light on racial discrimination. Brazilian media reports said Freitas told the guards "that he could not breathe," similarly to the words Floyd cried out while pinned under the knee of a Minneapolis police officer, France24.com reported.

"Today is the #DiadaConsciênciaNegra (Black Consciousness Day)," the governor of Rio Rio Grande do Sul, Eduardo Leite tweeted on Friday. "Unfortunately, on this date when we should celebrate public policies and progress in the fight for racial equality, we are faced with scenes that leave us indignant at the excess of violence that led to the death of a black citizen."

The guards — one reportedly identified as an off-duty military cop — accused of killing Freitas' death were arrested, according to the Associated Press. A Brazilian police chief, Nadine Anflor, told the news outlet that the officers "are being investigated for homicide due to the victim's asphyxiation and his inability to defend himself."

In addition, on Friday, representatives of the supermarket announced they had suspended the company's contractual relationship with the security firm that the guards worked for, according to Al Jazeera.

"Carrefour Brazil has taken immediate internal measures, particularly targeting the security company involved," the supermarket company said in a statement on Twitter on Saturday. "But these measures will not be enough. Racism and violence go completely against both my own values, and those of Carrefour."

Footage of the incident spread rapidly on social media and triggered protests against racism in Brazil on Friday, BBC News reported.

Protesters rallied at different supermarket locations in Brazil including Proto Alegre, Sao Paulo, and Brasilia, the capital of the country. They held "Black Lives Matter" signs,  and videos of the protest on social media show fire, looting, and broken windows by frustrated demonstrators.