MISSISSAUGA, Ontario (Reuters) – Canadian Conservative leader Andrew Scheer, who has a chance of defeating Prime Minister Justin Trudeau in the Oct. 21 election, is running as a fiscally prudent, minivan-driving dad whom Canadians can count on to rescue the country from the tax-and-spend Liberal leader. 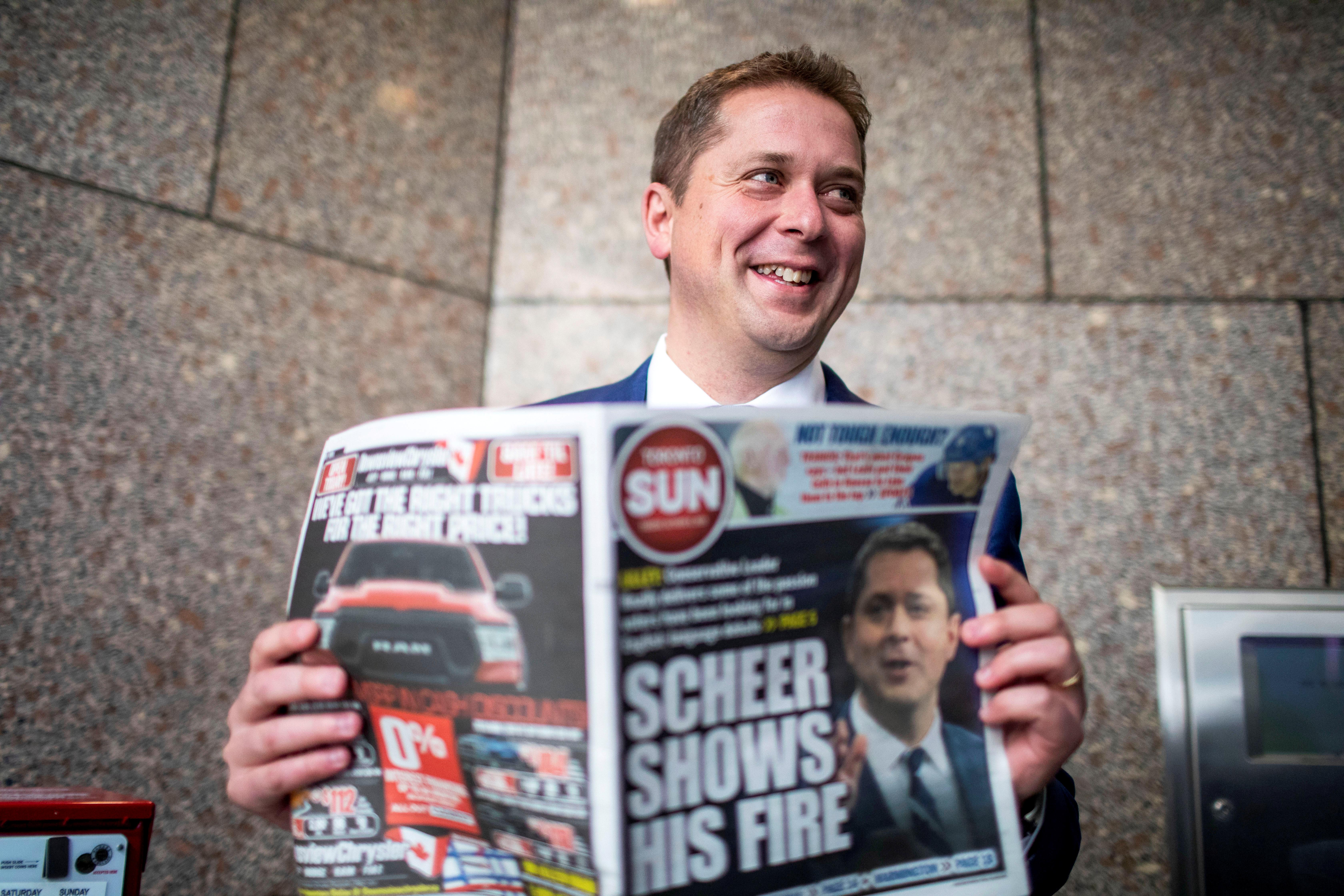 Scheer’s carefully cultivated everyman persona contrasts with his more charismatic opponent, whose star has faded after four years in government. Just since August, Trudeau has been embroiled in a blackface scandal and condemned by Canada’s ethics watchdog.

That has given the normally mild-mannered Scheer reason to go on the attack. In an election debate on Monday, Scheer attacked Trudeau as a blackface-wearing “phony” and “fraud” who does not deserve to govern, drawing gasps from the live audience.

With an untested leader at their helm, the Conservatives are counting on public fatigue with Trudeau to propel them to victory in a race that opinion polls show as virtually tied. Scheer was elected Conservative leader in 2017.

Scheer, a 40-year-old father of five, says his vision for Canada’s future is fiscal prudence and free markets, plus backing for the struggling oil industry and a little help to households for cost-of-living increases.

His first act in government, he says, will be to cancel Trudeau’s national carbon pricing scheme – a federal tax on fossil fuels that is intended to bring down carbon emissions, most of which is later refunded as a rebate.

Scheer has also vowed to balance the budget within five years, although unlike the Liberals and others, he has yet to release the full cost of his campaign promises.

“At the end of the day, the debate is always more government or less government,” Scheer told Reuters in a recent interview, saying his view was that the free market “has done untold good” throughout history.

But he has struggled under the spotlight at times, looking stiff behind the podium, and has seen his oft-used refrain that Trudeau, 47, is “not as advertised” turned against him when it was disclosed he holds dual Canadian-U.S. citizenship, which he is in the process of giving up.

Scheer, who along with others in his party, has criticized politicians in the past for holding dual citizenship, told reporters he had not disclosed it because “no one’s ever asked me.”

Asked why he had kept it to himself for so long, Scheer said in the interview: “The first time a reporter ever said: ‘Is he a dual citizen?’ I said: ‘Yes.’”

Scheer has also been taken to task repeatedly for his anti-abortion position – although he insists he has no plans to roll back women’s rights in Canada – for a 2005 anti-same sex marriage speech and for his refusal to take part in gay-pride marches.

In less than two weeks, Canada’s famously progressive Trudeau government could be dislodged by a social and fiscal conservative who spent little time in the working world before first being elected to parliament at age 25.

Four years ago, “change” was the overriding theme of the election for Trudeau after almost a decade of Conservative rule. While there is no single theme this year, Scheer is capitalizing on the sense that Trudeau has not delivered that change.

“This election is more about not voting the Liberal Party because honestly, I don’t really like what they did in the past four years,” first-time voter Vlad Gnatenko, 21, said at a Scheer rally outside Toronto.

In 2015, Conservatives argued that Trudeau lacked the experience to be prime minister, but the party has thrown its full weight behind Scheer, who has even less experience than Trudeau did.

“Justin Trudeau doesn’t get the daily struggles that we go through,” said Ted Hurley, a Conservative volunteer, at a small barbecue rally in Ottawa last month. “You can tell he’s a family man … who has driven a minivan and understands what families are going through.”

While the blackface scandal initially hurt Trudeau in the polls, the effect has since worn off. Now the Liberals appear to have a slight advantage in the vote-rich provinces of Ontario and Quebec, which have more parliamentary seats than the Western prairies where Scheer dominates.

Trudeau also has history on his side.

Not since 1935 has a Canadian prime minister who won a parliamentary majority in his first term been booted from office in the next election.

In response to Scheer’s balanced budget pledge, Trudeau has responded that it will lead cuts to services and will hurt households.

“You can’t cut your way to prosperity,” he says.

Kate Middleton Gets Real About Struggling with "Mom Guilt"