Home » World News » ‘The need to be here overrides the concern’: Fans wary of Omicron but flock to MCG

The Buckley party from Brisbane made a plan to come to Victoria for a cricket holiday and they were determined to stick to it despite the threat of COVID-19 and some morning rain.

The travelling group admit they are “cricket tragics” and were dressed in bright yellow Cricket Australia shirts, albeit with jumpers as light rain greeted them on Sunday morning for day one of the Boxing Day Test at the MCG. 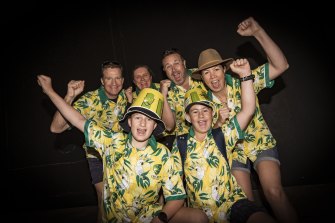 They plan to spend multiple days at the MCG and also enjoy a Yarra Valley wine tour on Monday. On Sunday they joined well over 60,000 supporters at the people’s ground for the third Ashes Test.

“Of course, it is a concern with the way Omicron [variant] is kicking off, but we made our plan to come to the Ashes and we stuck to that and here we are,” Karen said.

“We were super excited this morning and we are lucky enough to be staying walking distance away from the MCG so we enjoyed the atmosphere while we were walking to the game.“What better way to enjoy Boxing Day?”

Adrian and Jacob Buckley were both looking forward to the opening day of play, Jacob hoped Australia would bat first but was just happy to see the national team playing live.

“I like cricket and I play cricket for school,” Jacob, aged 11, said.

“We go to the Gabba to watch Big Bash sometimes but being here today is cool.”

“It’s always good fun. My dad used to take me to the cricket and I get to take Jacob to the game today,” Adrian said.

“I was hoping for better weather but it’s Melbourne so it could be sunny in half an hour.”

Wimbledon champion Ash Barty was at the MCG on Boxing Day to watch the game as her Australian Open preparations continue. Multiple grand slam winner Dylan Alcott was also in the stands.

Former Cricket Australia chief executive James Sutherland was on hand to watch play while the AFL and AFLW were well represented as always with Kevin Sheedy, Katie Brennan and Robert “Dipper” DiPierdomenico all at the stadium, as was Australian netballer Liz Watson.

Richard Rudzki has spent 30 years in Australia but he still enjoys every chance he can get to cheer for his native England.

Rudzki was part of a group of friends and family taking in day one of the Boxing Day Test on Sunday with his son Stefan and grandson Teddy.

“It will be 50-50 Aussies and English group and we do this every few years and do it for the soccer too,” Richard said.

“It’s just a great day out with the boys.” 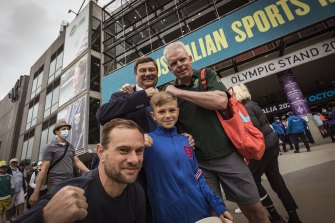 Scott Patterson is an Australian supporter who has been coming to Boxing Day tests since he was a boy. He looked forward to enjoying the day with Richard and the group.

“I’ve been coming to Boxing Day tests since I was five years of age so that’s over 50 years,” he said.

Both Patterson and Rudzki admit they were concerned about the COVID-19 numbers and the spread of the Omicron variant but did all they could to protect themselves and enjoy the day.

“There was a bit of concern but I will put on my mask in a minute [when we walk in] and fingers crossed,” Patterson said.

Richard said he was concerned but didn’t want to miss such a special event.“The need to be here overrides it, but there is some concern,” Richard said.

His son Stefan said he was a neutral supporter, while his son Teddy was looking forward to seeing England captain Joe Root play.

“He was up before the alarm this morning and couldn’t wait to get on the train.

Mount Isa teenager Thomas struggled to sleep last night ahead of his first visit to the MCG for a Boxing Day Test.

Thomas, dad David and their family travelled to Melbourne for a Christmas holiday and included a day at the cricket as part of their trip.

“It will be a massive experience,” Thomas said as he waited to go into the MCG.

“I’m really excited. I didn’t get much sleep last night so I’m hoping I don’t fall asleep during the game.”

David said the family was concerned about how COVID-19 restrictions could mess around their holiday plans but they wanted to make the most of their chance to have a family holiday before Thomas leaves home in the coming years.

“We were still having our doubts up until a day or two before leaving but it was an opportunity to have a holiday so we are just taking precautions, wearing masks, hand-washing and doing the best we can,” David said.

“The young fella is into cricket and we thought it would be a good opportunity as he will be moving away in the next couple of years so it could be the last family holiday.

“The kids have never been to Melbourne before so we thought it would be a good chance to go to day one of the Boxing Day test and have a look around Melbourne.”