Home » World News » ‘The only one who made it out’: Incredible Manus Island escape revealed

Toronto, Canada: Jaivet Ealom understands if you struggle to believe his story. At times, he can hardly believe it himself.

Ealom, 27, is a political economy student at the University of Toronto with a soft voice and a lively mind. Most of his classmates know him as a Rohingya refugee who fled Myanmar.

What few of them know is that he escaped Australia's offshore detention centre in Manus Island by posing as an interpreter. Or that he lived as a fugitive in Papua New Guinea and the Solomon Islands, where he obtained a passport by pretending to be a local. Or that he arrived in Toronto broke and alone, and was forced to sleep in a homeless shelter. 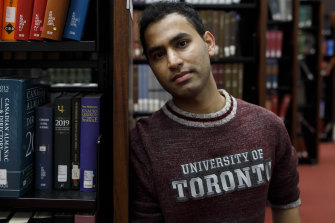 Jaivet Ealom is now a political science and economics student at the University of Toronto with a promising future. Just a few years earlier he was a stateless fugitive.Credit:Cole Burston

Had Ealom been caught during his daring and secretive cross-country journey, he risked being fined and imprisoned. Instead – after teaching himself a new language, altering his appearance and mastering global visa rules – he found freedom in the most unexpected of places.

Ealom is the first known asylum seeker to be resettled in a third country after successfully escaping from Australia's offshore detention system. He has never told his story publicly until now.

"I thought I would be stuck there for the rest of my life," he says of his three-and-a-half years on Manus Island. He was detained on Christmas Island for six months before that.

"I didn't want to rot in detention. I realised I needed to get out."

He says if he'd known what he was getting himself into, he would never have done it. "I took so many risks," he says, shaking his head. "There were many times I thought it was all over."

When told the details of Ealom's unauthorised journey from Manus to Canada, Paul Power, chief executive of the Refugee Council of Australia, says: "Nothing like this has ever come to light before. It's extraordinary." 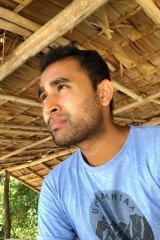 Ealom pictured during his time as a prisoner on Manus Island.

After six months on Christmas Island, Ealom was sent to the Manus Regional Processing Centre, which he calls a prison. He describes his experience in detention as "systematically designed torture".

Ealom was only 21 when he arrived in Manus, and had braces on his teeth that went unadjusted for years. "I was never given a chance to see a dentist," he says. "My mouth was bleeding constantly."

He was beaten up during riots that broke out between Papua New Guinean locals and the detained asylum seekers. He was also held in solitary confinement for weeks after being caught with a mobile phone and SIM card.

"It felt like psychological warfare," he says. "The guards knew your name but they would call you by your number. We were treated like animals."

Ealom was one of an estimated 60 asylum seekers who did not participate in the initial refugee assessment process. At the time, the Australian government's official stance was that all refugees would be resettled in PNG, a prospect many asylum seekers considered unsafe and undesirable.

Because of his status – known as "negative without assessment" – Ealom had no hope of being accepted into the US under the Australia-US resenttlement deal.

"I realised I had to take things into my own hands and do something," he says. "I was stateless, I didn't have any documentation. I could see things were just going to get worse." 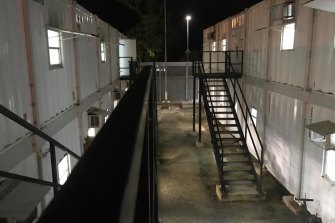 Ealom says his escape in May 2017 was the culmination of a year's worth of planning and preparation.

Ealom scraped together enough money for a plane ticket by exchanging rationed cigarettes for local currency. He also carefully studied the movements of staff members flying in and out of the island, using these patterns to help determine the safest time to attempt to leave.

Stephen Watt, a refugee advocate in Toronto who has become friends with Ealom, says he has specific personality traits that allowed him to get off the island.

"Jaivet is very good at figuring out how systems work and finding where the cracks are," Watt says. "He can see opportunities that other people can't."

Ealom says he was inspired by the hit show, Prison Break, which he had watched as teenager in Myanmar. It tells the story of prisoners on death row in Illinois who use an underground tunnel to escape jail.

He also learnt from the experience of Loghman Sawari, an asylum seeker who used fake documents to travel from Papua New Guinea to Fiji in February 2017. He claimed asylum there but was sent back to PNG and charged with passport forgery, which carried a jail term of up to six months and hefty fine. (The charges were eventually dropped.) 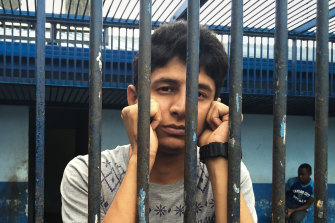 Iranian refugee Loghman Sawari, pictured in 2017, was arrested and sent back to PNG before charges against him were withdrawn.Credit:Alex Ellinghausen

He has asked for them not to be identified to protect them from any reprisals.

Other than his three allies, he kept everyone in the dark – including his fellow detainees on Manus.

Ealom chose to board a flight to Port Moresby that was commonly used by interpreters from different ethnic backgrounds. This allowed him to blend in with the other passengers – as did his new clothes and sunglasses.

"I put my earphones, with no sound playing, in so no one-would talk to me," he recalls. "My heart was beating so fast."

To his relief, he made it to Port Moresby without being detected.

Ealom's friend, Amir Sahragard, an Iranian asylum seeker who was also detained on Manus Island, noticed that he had gone missing at this time. But he didn't think much of it at first. 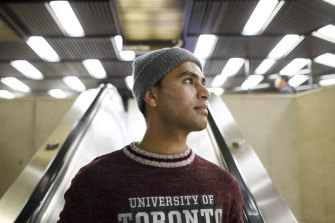 Ealom’s friends say he is good at examining systems and identifying weaknesses. He has had plenty of experience with that.Credit:Cole Burston

"I thought he must have gone into town, that he might come back soon," he says.

But as time passed, he became increasingly worried. "Jaivet disappeared, he deactivated his Facebook and Instagram," Sahragard says. "I thought something bad might have happened to him."

After a couple of months in Port Moresby, Ealom moved on to the Solomon Islands where he believed he would be safer. He lived in Honiara for several months at the home of a non-profit worker who allowed him to stay rent-free.

As part of a strategy to obtain citizenhip, Ealom learnt to speak the local Pjin language and took up chewing betel nuts, a popular local practice that stains your teeth red. This helped him fool the authorities into thinking he was a local and to hand him a Solomon passport.

He had never considered going to Canada, and didn't know anybody there. But he booked a flight to Toronto.

To get there, he had to fly first through Fiji, where immigration authorities suspected him of travelling illegally. He was detained there for two days, but he eventually managed to talk his way onto a flight to Hong Kong.

At Hong Kong airport, he again came under suspicion.

The airline staff eventually allowed him onto the plane, but he had no idea what would await him in Toronto.

"I was worried they would put me straight on a plane and I'd never see the other side of the airport."

In Canada, he tried a different tactic. He told the immigration official his story and confessed to travelling on a fake passport.

"He had every right to detain me but he didn't," Ealom says of the officer.

"He was so shocked by my story and how far I had come. He went out and bought me Subway with his own money. It was completely the opposite experience I'd had with Australia. Finally, I saw light at the end of the tunnel."

Broke and below freezing

Ealom arrived in Toronto in December, when it can be as cold as minus 30 degrees. He had no winter clothes and only about $50 to his name.

He took a bus to an overcrowded homeless shelter, where he slept on the floor.

He says he received an expedited hearing from the Canadian Refugee Board, which granted him refugee status after a 40-minute interview.

When Ealom told Amir Sahragard that he was living in Canada, his friend thought he was joking. "It's unbelievable," he says. "He was the only one who ever escaped from there and made it out." 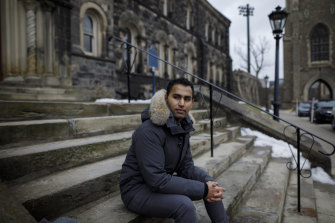 Ealom arrived in Toronto during a bitterly cold winter with $50 to his name and no support network.Credit:Cole Burston

The friends were reunited in November when Sahragard was resettled in Toronto under Canada's unique private refugee sponsorship program.

Ealom, who studied industrial chemistry in Myanmar, had originally been drawn to the hard sciences. But his experience in immigration detention sparked an interest in social justice.

In 2018, he enrolled to study political science and economics at the University of Toronto and will complete his degree this year.

He has become a prominent spokesmen for the Rohingya community in Canada and works at a company that provides software to non-profit organisations.

He rarely speaks about his experiences on Manus to Canadians, who usually have little knowledge of Australia's offshore detention policies.

"Nobody outside of Manus will ever be able to grasp the depth of it so I find it better not to tell," he says.

Ealom still suffers from post-traumatic stress disorder from his time in immigration detention. The sound of sirens or an unexpected knock of the door – reminders of his life on Manus – make him panic. But feels safe in Toronto, and has hope for the future.

"In Manus, I thought there was nothing good in the world," he says. "When I arrived in Canada, I felt human again."

Friend Stephen Watt says he is astounded at Ealom's successful integration into Canadian life and how he has thrived in his work and his study.

"Opportunities are falling into his lap," Watt says. "He has a lot of sweet things coming his way."