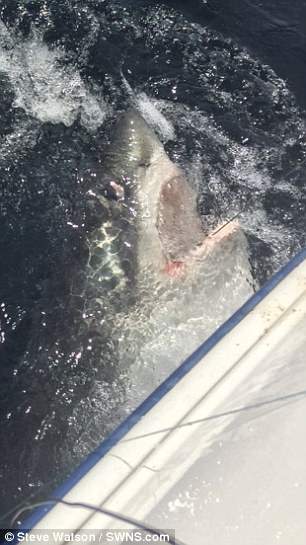 A third monster shark closely related to the Great White has been caught in UK waters – just days after a fisherman was attacked in Cornwall.

An angler has told how he fought an epic 40-minute battle to land the monster catch – a whopping nine-foot long Porbeagle shark.

Steve Watson reeled in the 250lb (17 stone) shark on a fishing trip off the coast of Whitby.

The catch comes just days after a porbeagle bit a fisherman in Cornwall.

It is believed the shark was being released back into the water from a boat’s deck when it bit the man’s leg.

After the Coastguard were alerted, a helicopter crew was scrambled from the Cornish town of Newquay to the vessel which was 107 nautical miles west of Lands’ End.

Max Berryman, 21, was airlifted to hospital after the shark went for him 110miles west of the Isles of Scilly on Sunday.

On Monday, a 28-stone porbeagle was caught off the Devon coast, at Hartland Point.

In the same area, a week previously, John Kruppa and Dan Hawkins caught another weighing in at 22-stone and measuring eight-foot. 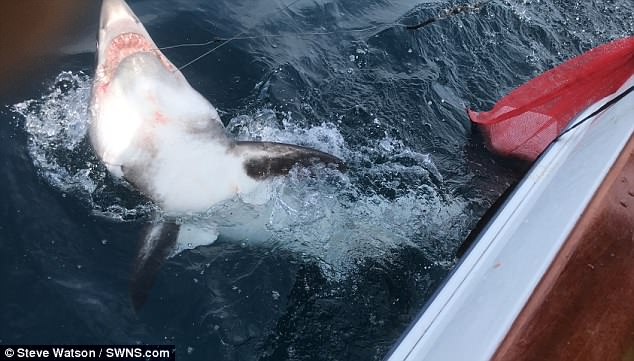 The hulking 17st beast, believed to be a porbeagle shark, was reeled in by Steve Watson and his two friends 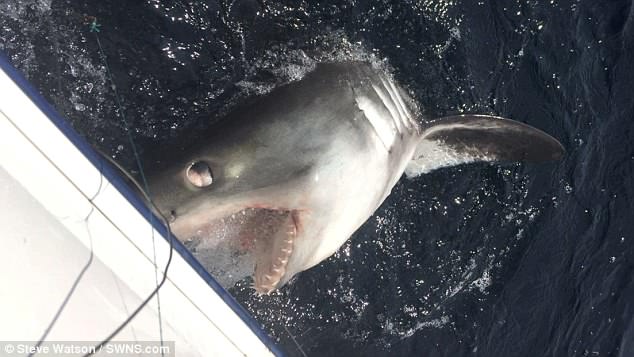 The catches come as fears grow over a monster shark lurking off the British coast. Beach-goers found the half eaten corpses of dolphins on the sand in Great Yarmouth, Norfolk at the weekend.

The first dolphin was found dead on Saturday morning on Yarmouth’s Pleasure beach and another was found days later leading to concern over how they came to be part devoured and dead on the shore.

Steve, along with Andy Watson and Matt Ward, came across the mammoth shark 15 miles out at sea and couldn’t believe their luck.

But reeling the shark in was no easy task and the anglers were locked in a tense contest described by Steve as ‘very difficult’ before releasing it back into the wild.

He said: ‘It was incredible. They come up to the surface and swim round the boat, it’s amazing to watch.

‘They are very delicate when they take the bait but after about 30 seconds we decided to tighten the line. It took about 40 minutes to land.

‘They look very, very much like a great white, the only way to tell the difference is by their fins – they are very, very similar.’

The group from Wakefield and Dewsbury have previously caught sharks believed to be around 500lb (35 stone) and say they estimate this shark to be 250lb (17 stone).

Porbeagles are a cousin of the Great White and are one of the most common types of shark spotted in UK waters. 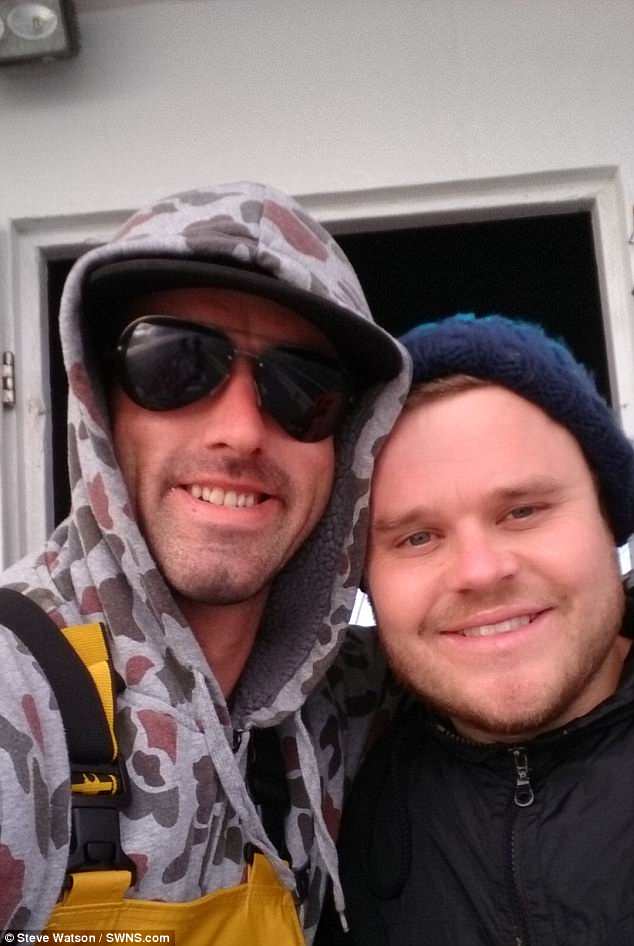 Andy Watson (left) and Matt Ward, two of the friends who reeled in a whopping nine-foot long shark off the coast of Whitby

The porbeagle is a ‘playful’ species of mackerel shark which lives in the cold and temperate marine waters of the North Atlantic and Southern Hemisphere.

The numbers of porbeagles has dwindled over the last few decades after a rise in them being sought by hobby fishers.

Only a handful of non-confirmed shark attacks have ever been attributed to the porbeagle.

The International Shark Attack File attributes three bites to the species – one provoked and none fatal and two on boats.

Steve added: ‘Talking to local charter boat skippers, we think this could be the first shark caught off Whitby this year. ‘Using special hooks which we get from USA, we were able to easily unhook the fish in the water, enabling it to swim off safely.’ 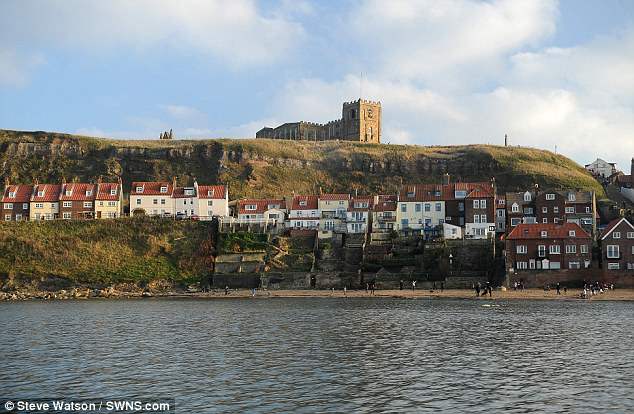 Rich Cope, 38, who runs the Whitby-based boat charters, Mistress Sea Angling, said at the time: ‘It was like trying to control a car on a fishing rod! ‘We were about 20 miles off the Whitby coast. We see them in the summer some seasons, but we don’t see many.

‘This last month there have been a couple of sightings in that area. We had only been fishing about 15 minutes when we got it on.

‘We knew it was a shark, it was very exciting. I don’t suppose many people have a job like mine, I love fishing and get a lot of excitement.’

In 2017 three porbeagle sharks weighing 238lbs, 392lbs and 500lbs were caught off the coastline of Devon and Cornwall.

What is a porbeagle shark and is it dangerous?

Porbeagle sharks come from the family of Lamnidae sharks and can be found in the the North Atlantic Ocean.

The shark has been spotted all around the UK in deep waters, usually several miles offshore in the summer time where it hunts mackerel herring and squid. 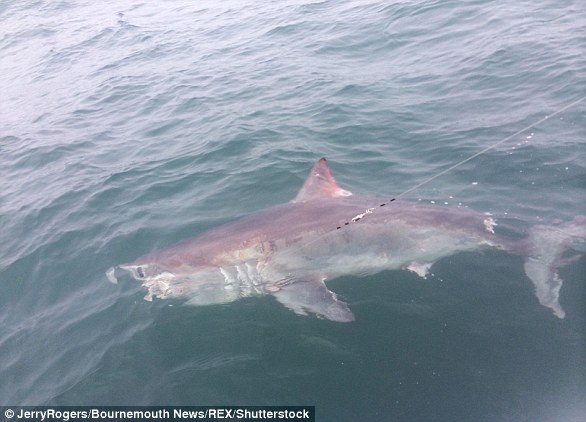 There have been sightings of the shark off Scotland, Devon and South Shields in recent years.

The porbeagle is also found around the coasts of North Africa, in the Mediterranean and around Australia and New Zealand.

The gigantic shark can reach more than eight-foot in length and can weigh up to 22 stone.

Despite being related to the great white shark the porbeagle is not known to be dangerous.

There are three recorded shark attacks involving porbeagles, two involving boats and another which did not result in serious injury.