Three men have been found guilty of kidnapping, gang-raping and murdering a university student in South Africa last year.

Hannah Cornelius, 21, was carjacked by four men while dropping off fellow student Cheslin Marsh, 22, at his home in Stellenbosch, west of Cape Town, after a night out in May 2017.

The men robbed and assaulted Mr Marsh and left him for dead, before brutally raping Ms Cornelius, stabbing her in the neck and crushing her skull with a rock.

Geraldo Parsons, 27, Vernon Witbooi, 33, and Eben van Niekerk, 28, have today been found guilty of the rape and murder, as well as the kidnap, robbery and attempted murder of Mr Marsh. 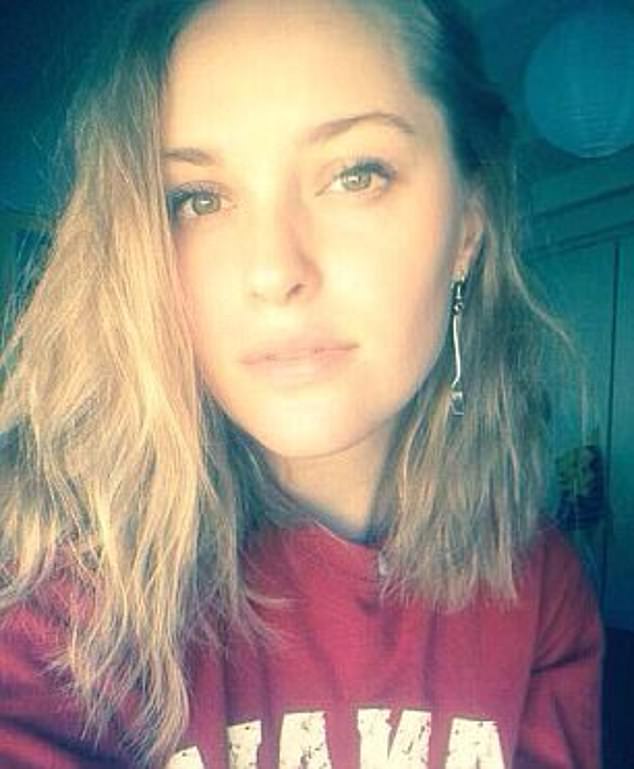 Justice: Hannah Cornelius, 21, was raped and murdered in Stellenbosch, South Africa, after she and her friend were carjacked by four men in May, last year 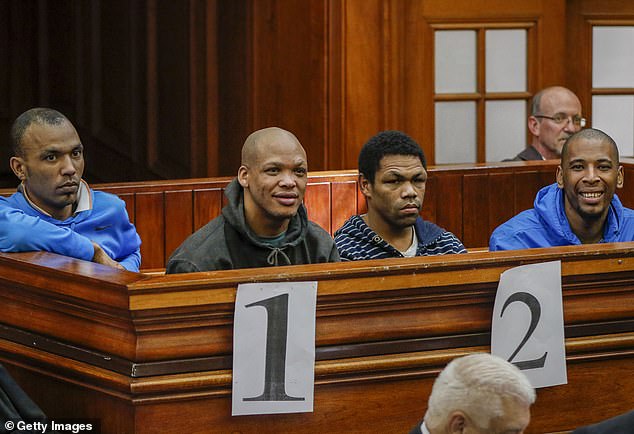 Video footage from the court posted on social media by Times Live hears Parsons and Witbooi being asked in Afrikaans if they are sorry, to which Parsons responds that he is.

Witbooi, whom the judge revealed to the court has a criminal record going back 19 years, is then seen walking out of the room while giving a thumbs up to the camera.

Parsons had previously told the court during the trial that the quartet had only intended on stealing Ms Cornelius’ car and that the incident spiralled after they saw the two students still inside.

He said the desperate student had bargained with them, agreeing to let the men sexually assault her – as long as they let her live.

However, several of the men brutally raped her, after which they threw her into the boot of her own car, and drove her to a secluded spot where they murdered her.

CCTV footage released during the trial shows how the incident began in the early hours of May 27, 2017. 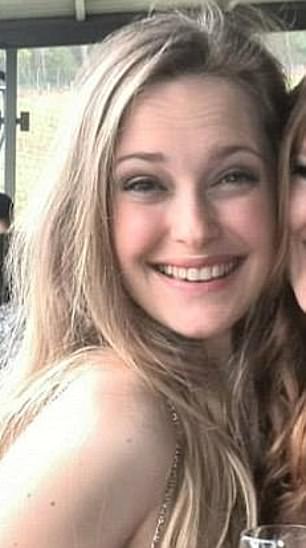 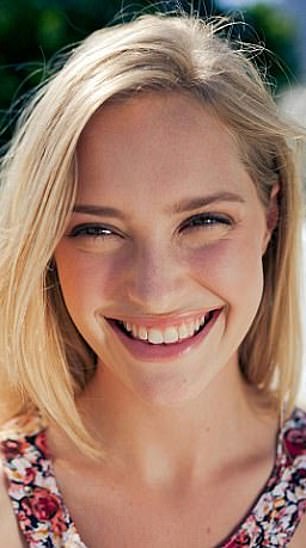 Taken: Ms Cornelius, a second year university student, had driven her friend Cheslin Marsh home, and the pair were carjacked outside his block of flats 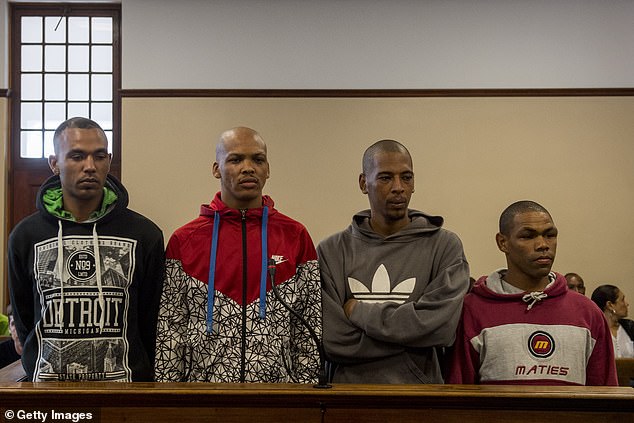 Evil: Ms Cornelius reportedly bargained with the men in order to try to convince them to let her live, but they ended her life by crushing her head with a large rock 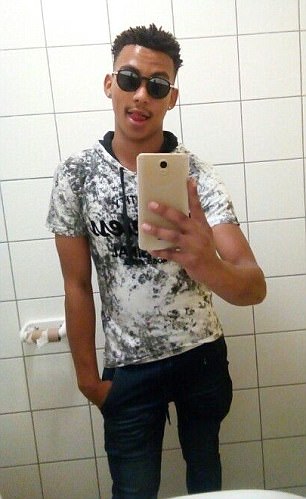 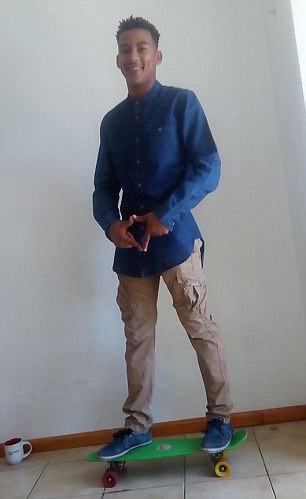 Scarred for life: Mr Marsh survived, but has been left deaf in one ear and has been unable to return to his studies 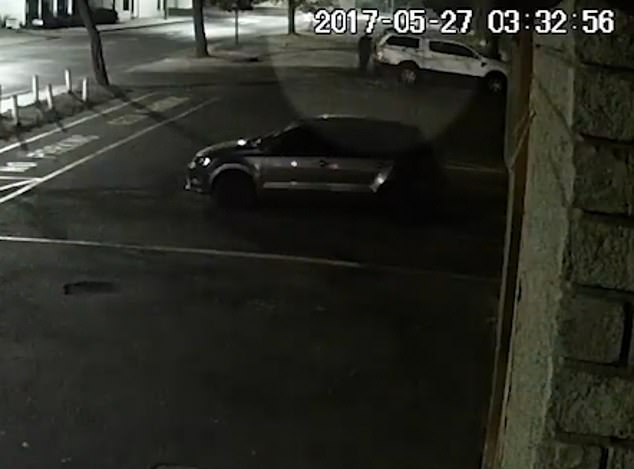 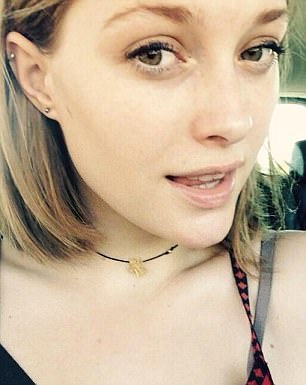 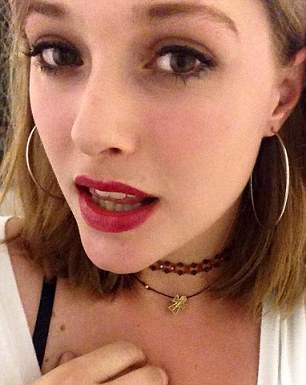 Pure evil: Describing the sexual assault Ms Cornelius suffered, a state pathologist told the Western Cape High Court it ‘would have been a very painful experience to the person’

Mr Marsh says they had ended up chatting in the car, and were interrupted by a man putting a screwdriver to Ms Cornelius’ chest through the open window.

They were forced out of the car, after which Mr Marsh was robbed of cash and his phone and locked in the car boot.

The four men forced Ms Cornelius to get back into the car with them, after which they drove to a drug dealer’s home to smoke crystal meth, before they drove out of Stellenbosch and pulled over near a local vineyard.

They reportedly dragged Mr Marsh out of the boot and made him lay his head on a rock on the ground before battering his skull with bricks until they thought he was dead. 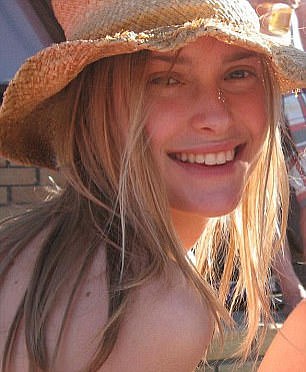 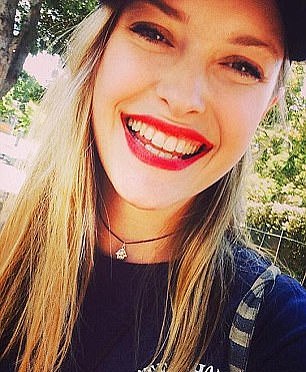 Shocking: Ms Cornelius was dragged from her car and raped by at least three of the men, the court heard last month 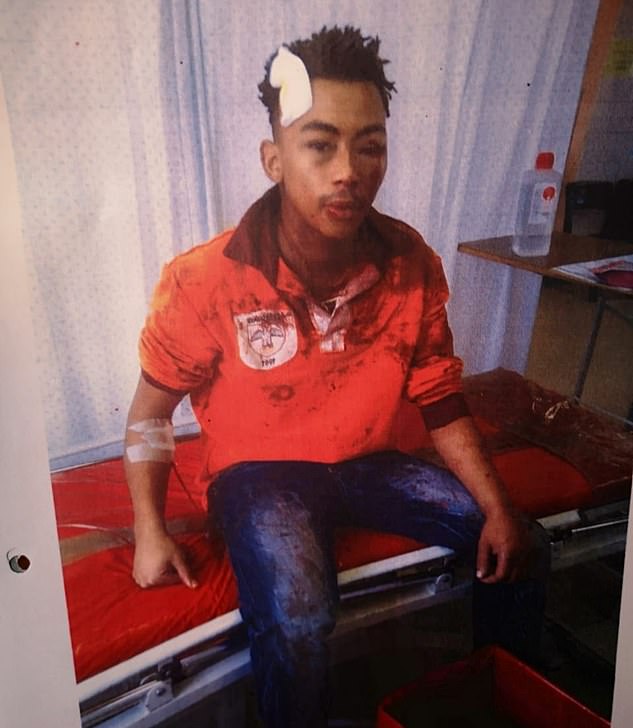 Injured: Three men made Mr Marsh (pictured after) put his head on a rock then battered his skull with house bricks until they thought he was dead 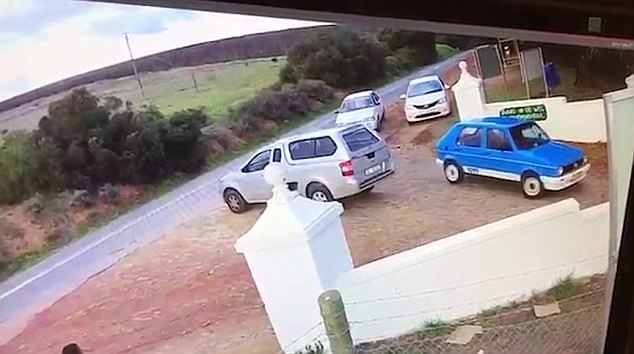 Mr Marsh recovered consciousness the following day, and staggered to a nearby home suffering severe head injuries and a broken arm to raise the alarm about Ms Cornelius.

Unknown to him her body had been found just hours earlier, dumped by the roadside.

After the rape and murder of Ms Cornelius, the gang went on a crime spree in the hijacked car, robbing at least three women before the stolen car was spotted and a high speed police chase began.

Three were arrested after dumping the car and fleeing and the fourth was arrested later.

The Psychological Reason You’re So Obsessed With Fall