Thug is jailed for 12 months for attacking girlfriend on trip away moments after asking hotel worker: ‘What beer would you recommend I have before killing somebody?’

A nurse has been left ‘in constant fear’ and unable to sleep after her violent ex-boyfriend publicly beat her and almost broke her finger in two while staying at a hotel.

Faye Welding booked into a Premier Inn with Lee Cunliffe for a trip away to the Trafford Centre near Manchester where he hit her across the face, pulled her arm and bent back her left index finger so it almost broke.

The couple, who had been together for nine years and have since split, had an argument at the shopping centre and became separated but arranged to meet up again at 1am.

When he arrived back at the hotel Mr Cunliffe, 35, berated his ex-girlfriend, who works as a practice nurse at a GP surgery, over the phone and asked a concerned receptionist: ‘What beer would you recommend I have before killing somebody?’ 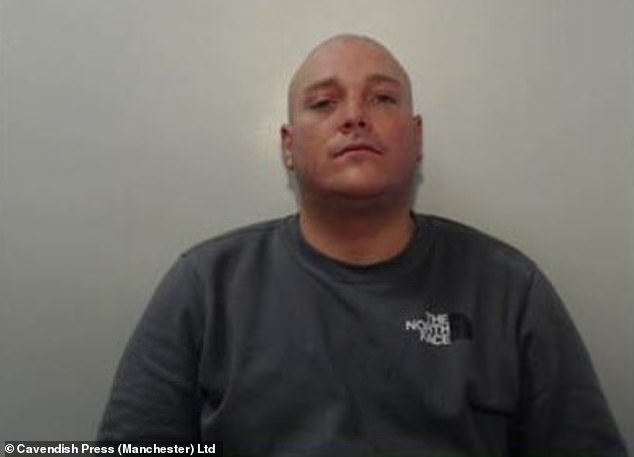 Lee Cunliffe, 35, attacked his girlfriend of nine years, Faye Welding, while they were on a trip away to the Trafford Centre in Manchester

Mr Cunliffe, who has been jailed for 12 months for the vicious attack, walked out of the Premier Inn and met Miss Welding, in her 30s, in the middle of a large roundabout where another argument began.

Prosecutor Kate Gaskell said on January 4 at around 12.30am he began to hit her and slap her across the face with an open palm before she ran towards the hotel through some bushes to get to the entrance.

The 35-year-old from Warrington, Cheshire, ran after her and swung her round by her arms and hand and pulled her hair.

People inside the hotel became concerned when they heard the noise outside and Mr Cunliffe, who had been heavily drinking in the run up to the attack, ran off before the police were called.

Officers noted the crying woman had leaves in her hair and there was a red mark on her right cheek.

Miss Welding underwent tests for a possible fracture after the thug bent her finger back but she was found to have suffered severe ligament damage.

Kate Gaskell added: ‘It was a sustained and repeated attack on the complainant which involved pulling of her hair, hitting her and chasing her as she went for help.’

In the attack, Cunliffe repeatedly hit Faye Welding, in her 30s, pulled her hair, slapped her and chased her as she ran for help

The nurse had to take several weeks off work but is thought to be back and helping other NHS workers beat the coronavirus crisis.

In a statement to police she said: ‘Since the incident I have had a lot of feelings of shame and embarrassment from this incident.

‘I am in constant fear of going outside as I don’t want people staring at me and I’ve had trouble sleeping as I am constantly afraid that when Mr Cunliffe gets out he will try and hurt me.

‘My sleep has been so badly affected I have had to see my GP in order to get sleeping tablets due to me not getting more than one hour uninterrupted sleep.

‘I recently had a nightmare that Mr Cunliffe was chasing me and upon waking up I couldn’t go back to sleep and instead had a 1,000 questions as to what he might do to me.

‘I am not sure how he will react after this. He has previously told me he will kill me and will make a mess of me and that no-one would want to date me after that.

‘I feel safe now he’s being arrested but I feel pain on a day to day basis when I grab things with my left hand or drive my car.’

At Minshull Street Crown Court, Cunliffe admitted assault occasioning actual bodily harm and was jailed for 12 months. He was also made subject of an indefinite restraining order banning him from contacting Miss Welding.

He had previously been convicted in June last year of public order matters and possessing an offensive weapon and was handed a 12 month jail term suspended for two years.

He also had other convictions for drink driving and assault.

In mitigation defence lawyer David Polglase said his client had suffered a brain injury as a result of an incident several years ago and added: ‘Whilst there is a degree of sustained and repeated nature of the assault it doesn’t go on for the longest of times. Miss Welding has not had to leave her home.’

But sentencing Judge John Potter told Cunliffe: ‘You hit your victim over the head and slapped her across the face on a number of occasions. She was frightened by that appalling behaviour by you but you continued to assault her.

‘Thankfully she has not suffered long term injury to her hand but it is an unpleasant injury which results even now in pain when she is at work as a nurse.

‘Unsurprisingly she remains in fear of what you might do to her. The fact you have suffered harm in your life gives you no excuse to abuse those whom you are in a relationship with.’

Make Your Own Animated Movies, Frame by Frame