Fugitive Hong Kong legislator Ted Hui has become the first Hong Kong politician to be granted a travel exemption by the Australian government, as exiled pro-democracy leaders fan out across the world.

Hui, who fled Hong Kong on bail and is still facing money laundering and national security charges, arrived in Darwin on Monday and will now settle in Australia with his family.

The decision to grant Hui a repatriation flight and a visa is a significant escalation in Australia’s response to Beijing’s ongoing suppression of democracy in Hong Kong. The father of two has spent the last three months in Europe and the United Kingdom lobbying for stronger international responses to the national security laws that punish dissent against Beijing with sentences of up to life in prison. 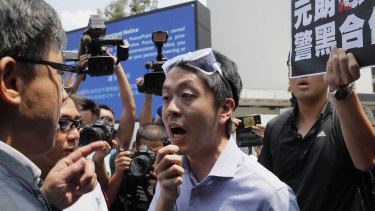 “It is time to move on to a different battleground,” Hui said in a phone interview from hotel quarantine.

The former Democratic Party legislative councillor was a leading campaigner against the mainland extradition bill that sparked more than 18 months of protest in Hong Kong in 2019 and 2020. He drove a criminal prosecution case against the Hong Kong police force for shooting an unarmed teenager, was forcibly removed from the chamber after scuffling with pro-Beijing legislators over the national security laws and later led protests after Hong Kong pro-democracy politicians were disqualified en masse by Beijing. 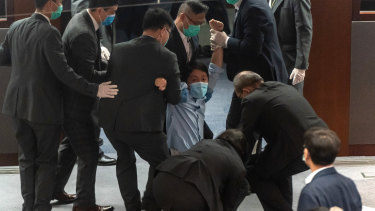 Pro-democracy member of the Hong Kong Legislative Council Ted Hui Chi-fung being removed by security during a scuffle with pro-Beijing legislators.Credit:Getty Images

Hui, who has denied allegations of money laundering, said he declared all of his charges and convictions to Australian authorities before being granted a visa. The claims relate to HK$850,000 ($141,000) in crowdfunding raised for a civil injunction against alleged police brutality that was allegedly transferred to Hui’s family accounts.

In December, Hui had his and his families accounts locked by HSBC, Hang Seng Bank and Bank of China after Hong Kong police ordered the financial institutions to freeze his funds over money-laundering allegations.

“I believe the Australian government is fully aware of the fact that I am on the Hong Kong government’s wanted list for arrest,” he said.

The 38-year-old said he would be meeting by video link with Australian MPs over the coming days to push for the Morrison government to legislate Magnitsky-style financial sanctions for Chinese officials, diversify its economy away from China, and escalate its response to Hong Kong by providing safe-haven visas for people wanting to leave the city.

He said while there was a large Hong Kong population living in Australia, there were few prominent pro-democracy leaders who had now decided to spread out across the Five Eyes intelligence and security network of Canada, the UK, New Zealand, the US and Australia.

“It is strategic for our advocacy and the division of labour,” he said. “I am happy to be the one who does the work here for Hong Kong.”

On Thursday, the Chinese Communist Party will pass new laws that will complement the national security legislation and give Beijing the power to vet candidates for Hong Kong’s legislative council and stack the committee that will vote on its chief executive.

“I’m glad that the central authorities have, again, exercised its constitutional powers to help address this problem for Hong Kong,” she said.

Hui said the new laws showed the Hong Kong regime and Beijing would not tolerate any resistance.

“It is a huge step backward and we can foresee that no pan-democratic politicians will be allowed to run in public elections,” he said. “It is a further step to execute and silence dissent.”

Victorian Jane Poon, a member of the Australia-Hong Kong Link advocacy network, said “Australia is one of the main battlefields against the CCP”.

“Most of the other well-known leaders in UK or US, none of them come to Australia,” she said. “Now he is here it will strengthen the Hong Kong community.”

Unlike Europe, the US or the UK, Hui is among the few non-Australian residents or citizens to be able to travel to Australia since borders were shut at the start of the coronavirus pandemic. In December 7156 visitor visas were granted, down from 519,586 at the same time in 2019. The visas can be granted in emergency circumstances or for work purposes. Hui said he planned to stay for the foreseeable future in a yet-to-be disclosed city and that the Australian government had given him assurances beyond his initial year-long visa approval.

The move is expected to trigger another rebuke from China’s Ministry of Foreign Affairs. Last week it hit out at Australia after new figures, first reported by SBS, showed less than five Hong Kong passport holders had been granted Hong Kong protection visas.

Australia’s relationship with China has hit its lowest point since diplomatic relations were established in the 1970s after a year of disputes over the coronavirus, blocked foreign investment deals, claims of human rights abuse in Hong Kong and Xinjiang, prompting Beijing to launch trade strikes on more than $10 billion worth of exports.

The Department of Home Affairs and Foreign Minister Marise Payne were contacted for comment.