Tina Tchen was a senior official in the Obama White House, holding posts that included chief of staff to the first lady and assistant to the president. A lawyer by training, Tchen has since been instrumental in spearheading the Time's Up Legal Defense Fund. The Chicago-based 63-year-old also chairs a taskforce on diversity and inclusion for the Grammys and consults on gender inequity and sexual harassment. 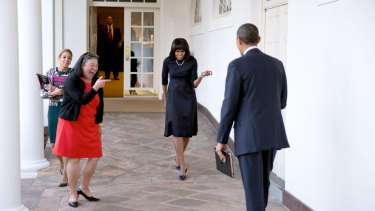 Tina Tchen was a senior official in the Obama White House, holding posts that included chief of staff to the first lady and assistant to the president. Credit:Alamy

You helped found Time's Up, the movement against sexual harassment which began in Hollywood. Why is it that after years of mistreatment, the world recently decided to listen to women's stories?

The women who were coming forward in the entertainment industry were women people knew. Here we are in this celebrity-driven culture and we watch Ashley Judd on TV and we all think we're Ashley Judd's friend. So when all these women in Hollywood started speaking out, it resonated, because they were people you knew. Coupled with that is the fact that this is happening in the social-media age. Years ago, if you were moved by something, you'd tell 10 friends. But now you put a hashtag on it and millions of people hear it. Seeing other people have similar experiences gives you courage. And then corporate America had no choice but to listen. I mean, people came forward in 60 different industries [to share stories of harassment].

In his speeches, Barack Obama has often paraphrased Martin Luther King jnr in saying that the arc of the moral universe is long, but it bends towards justice. Amid great tumult and the erosion of political norms in the past few years, do you still believe that's true?

I do. You have to take the long view on these issues. When we first got elected in 2008, it was a big debate whether anyone was entitled to healthcare. It was an open question of whether healthcare was something we should spend money on. Now, people are trying to undo Obamacare, but no one is saying we should go back to a period where people don't have healthcare, even on the other side. And look at LGBTI rights. In 2008, Don't Ask, Don't Tell [a Clinton-era policy which forced soldiers to lie about or hide their sexual orientation, repealed in 2010] was still a thing. You could not be an LGBTI military person. You couldn't be married if you were LGBTI. [The US Supreme Court legalised gay marriage nationwide in 2015.] We're never going back on those issues. That's an incredible amount of progress in 10 years. And it shows that fundamental cultural change is possible.

Your parents fled communist China in 1949 to settle in Ohio. Later, you helped the Obamas host two Chinese presidents at state dinners. What was that like?

At the first Chinese state dinner [for President Hu Jintao, in 2011], there was an amazing moment when I went through the receiving line, and President Obama introduced me to the president of China as a good friend. The president of China said, "Oh yes, I know Ms Tchen." Oh my god, I thought, the president of China knows who I am! Of course, when you think about it, it wasn't that surprising. There were few Chinese-Americans at the top of the administration. But at that point in time I had no idea that was the attention I would be given.

You spent more than two decades working at law firms and have since returned to that world. Just how sexist an environment was the law when you started in the mid-1980s?

It was like a lot of corporate environments. There were very few women, very few people of colour, even fewer women of colour, especially Asian-American women. There's a stereotype of them being quiet and demure, which is definitely not who I am. More often than not, I was in rooms where I was the only woman. Because of my upbringing, being the "only" of something, that was a situation I was accustomed to.

What's your advice to a young person who might find themselves in a similar situation?

You may be the "only" in the room but don't let it get inside your head. Know that you're there for a reason. You know what you're talking about, do your homework, and then own your space in the room.

What are you most proud of accomplishing in the White House?

When I was executive director of the Council on Women and Girls, we did a lot of things around combating sexual assault on campus. It was the first time there was a comprehensive federal approach to that issue. We also put in place a whole agenda for working families, including paid family leave and retention efforts. At the Office of the First Lady, our last initiative was an international one, Let Girls Learn, to support adolescent education. An all-US government effort helped adolescent girls around the world fulfil 12 years of education. We know how important it is, from the World Bank and others, to educate girls in order to lift the entire economy of a nation and drive peace and security.

You've talked about how it takes time to figure out the degree to which a first lady embraces an agenda. How did Michelle Obama decide on what issues to weigh in on?

The office of first lady has no specific responsibilities or job description. It doesn't even have a salary. Notwithstanding that, it's a huge platform from which to speak out. Mrs Obama was very clear first of all that she only wanted to advance things that would advance the president's agenda, because only one person in the building was elected. Second, they should be things that she cares about and are authentic to her. She never wanted to speak out on something she didn't have personal experience with. Third, she wanted to make sure everything she did had an impact. Not just awareness raising, but issues on which people would be able to see and feel change happening. That was how, for instance, we arrived at the cause of helping military families.

As well as being what you call your "forever boss", Michelle Obama is a longtime friend. What's something about her that would surprise people?

Now that she's written a book, there's not that much. It's pretty candid.

Her candour in that memoir, Becoming, has been surprising to many readers.

That's mostly because the role of first lady is constrained. People have commented on an openness in the book, but that directness was always there. With Mrs Obama, you understand that the person in front of the camera is exactly the same as the person behind the camera. She's not any different in public than she is in private.

A recent Gallup survey named Michelle Obama as America's most admired woman. What's she like as a friend?

Enormously thoughtful and caring. She knows about and asks about your family. She remembers birthdays and other milestones in people's lives. She wants to know what you're doing and is genuinely interested. So much so she'll sometimes challenge you. You see in the book how much she challenges herself. She also challenges her friends to be the best people they can be. So for me, she asks, "Are you sleeping?" "Are you exercising?" Which is, by the way, a big failing of mine. She is as invested in her friends as she is in everything else.

How does it feel to watch a very different first lady at work?

I don't want to comment on the current administration. I don't know what's going on inside the building. I do know that what you see is only a fraction of what is going on. I will say that for our job and how we viewed it, you are under a microscope unlike any other, down to the shoes someone is wearing on any given day. You had to be careful walking around the building with papers in hand, because if you walked past the press, someone would catch what was written on the paper. Any small thing would become the issue of the news cycle. At the same time, the scrutiny is warranted because the impact you can have is astonishing.

You're a high achiever. How many hours' sleep did you get last night?

Five hours. It's become something I'm known for – that I only need a few hours' sleep to function – but I can't take any credit. It's genetic.

Tina Tchen appears at the All About Women festival, Sydney Opera House, on March 10.

UK could legalise cannabis in next five years say tycoons

Hospitals could run out of beds by December 17