Home » World News » To Melbourne protesters: The Shrine is not for you

As a child of a veteran, it infuriates me that anti-vaccine protesters in Melbourne chose to demonstrate at the Shrine of Remembrance (and in fact, more broadly, that right-wing extremists of all persuasions have had a history of conflating their causes with events and spaces meant to honour veterans).

The Shrine is there to remember actual people, like my father, who served in the military. 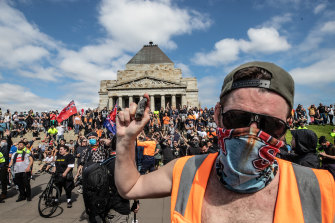 Protesters gather at the Shrine of Remembrance on Wednesday.Credit:Jason South

The Shrine does not stand for warped ideologies or whatever it is that this group imagines about it that gives them the right to align with and stand on, as they describe it, the “sacred ground” that is the Shrine.

The Shrine is about remembering people who have died or been traumatically impacted by their war experience.

The Shrine is a solemn place where veterans and their families gather to think about all they have lost.

Protesting at this site is akin to dancing on the graves of fallen soldiers. I feel so deeply saddened for every veteran and veteran family that they have to witness people like these tainting their experience in this way. 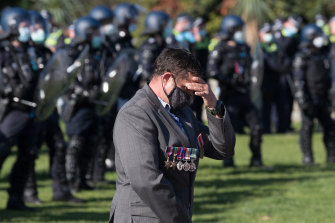 A visibly upset man at the Shrine on Wednesday. Credit:Jason South

I know a lot of people have not grown up in a family where military service has been part of their lives. But I did. For me, the Shrine is a place where I feel the grief of losing my dad when he was only 52 because his exposure to Agent Orange gave him the melanoma cancer that killed him.

It’s where I spend time hating the stupid war that gave him the PTSD that made him act out so violently to his family. It is a place where I indulge in the wishful fantasy of how our relationship might have changed if he had lived long enough to receive the psychological help he needed.

The Shrine is also a place where I think about all the serving members who are struggling with their own, often lifelong, mental health issues or have suffered injuries in the line of duty or been killed in service of our country.

I do not like violence and I do not like war. But veterans, and this landmark that has been created to honour their service, deserve to be treated with respect.

Veterans are people who know what it is to make great sacrifices. They have taken bullets for their country.

No one in the crowd of people protesting about their right to put their own individual preferences about vaccination above doing something that is for the greater good, has the first inkling about the concept of sacrifice.

Not one of them has earned the right to stand on that sacred ground.

Ruth Clare is a freelance writer.