‘I’ve £30,000 rotting in the ground’: Truffle farmer who spent a decade nurturing prized spores is now giving away his luxury crop for FREE because he can’t sell to Covid-hit restaurants

A truffle farmer who spent a decade nurturing his prized spores is now giving away his luxury crop for free because he cannot sell to Covid-hit restaurants.

Mike Collison from Stapleton, Shropshire, is handing out his costly yield to locals so it doesn’t go to waste, as restaurants are still reeling from the virus outbreak.

He said £30,000 worth of the underground fungus is ‘rotting in the ground’, as it turns ‘totally unsaleable and worthless’. 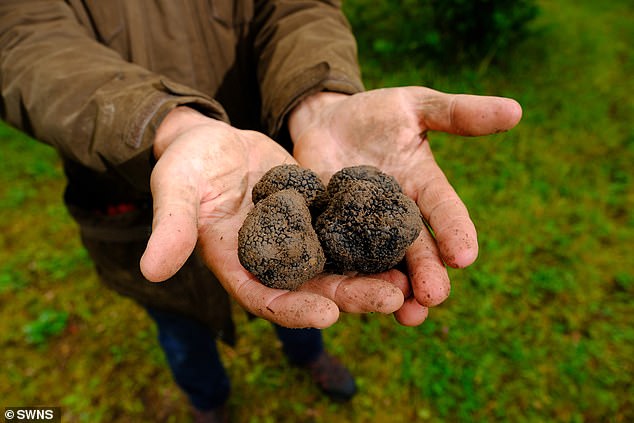 Farmer Mike Collison, 59, from Shropshire near Shrewsbury has been left with a bumper crop that is going to waste at the potential loss of £30,000 as restaurants have only just reopened

Mr Collison told the BBC: ‘As you can see this truffle is totally rotten, totally unsaleable and worthless.

Speaking alongside his dog Oscar, who smells out the truffles, he continued: ‘So this one is a good truffle, smells nice and earthy, solid, and that’s a very saleable truffle.

‘I now give them to locals in the village and probably about 50 people in this village currently have tried truffles who have never had them before, and I’ve not had a complaint yet.’

The farmer’s neighbour, Suzy Brander, said: ‘This morning we had truffles and we also had them yesterday as well in an omelette. They’re really nice, a really lovely flavour, quite earthy, a little bit different.’

Mr Collison added: ‘I’m optimistic that we will sell some come September, October time. Quite how many we will sell will depend on coronavirus and how that pans out in the future.’ 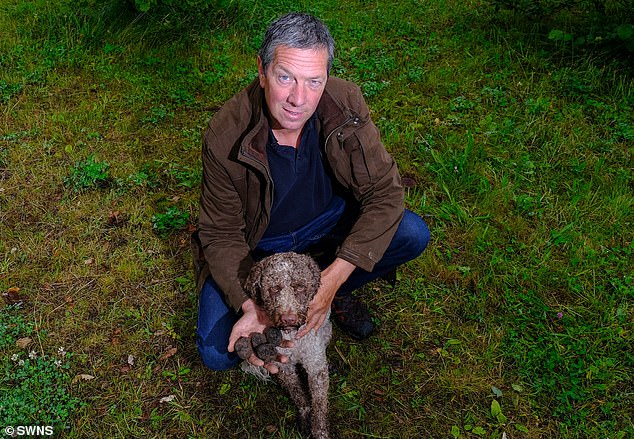 Mr Collison with his dog Oscar, who sniffs out the truffles. The farmer is handing out his costly yield to locals in his village so it doesn’t go to waste 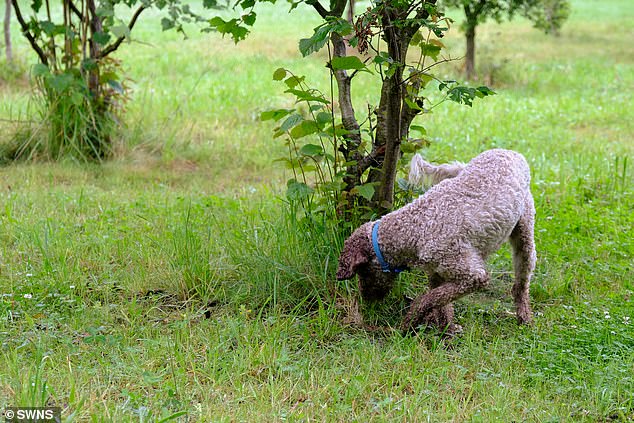 Oscar smelling out the truffles in the farmer’s orchard. Mr Collison said there are ‘about 50 people in this village currently have tried truffles who have never had them before’

It comes as Britons will get 50 per cent off the cost of most meals when dining out from Monday to Wednesday in August, under Rishi Sunak’s new scheme.

Soft drinks will be included in the deal but alcohol will not, and meals must be consumed on the premises so takeaway food won’t count.

However, the Government is already making it easier for pubs, restaurants and cafes to turn pavements, terraces and even car parks into outdoor seating areas. 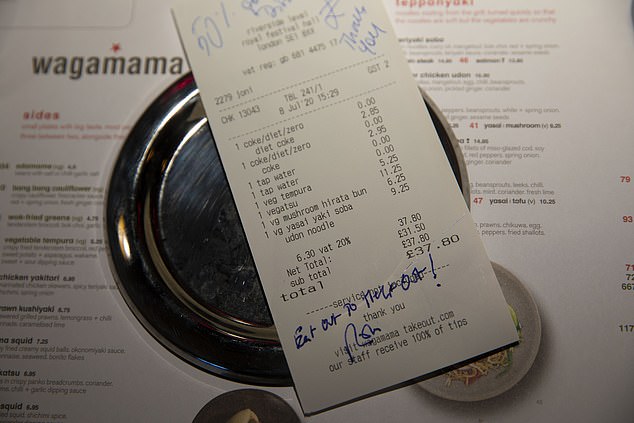 Britons will get 50 per cent off the cost of most meals when dining out from Monday to Wednesday in August, under Rishi Sunak’s scheme (receipt signed by Chancellor, pictured)

The Eat Out to Help Out discount can be used ‘unlimited times’.

Officials had considered dishing out vouchers to everyone, but decided it would lead to an increased risk of fraud and would take longer to administer.

Businesses will need to register on the Government website to take part, with full details due to be published next week.

Mr Sunak said yesterday: ‘This moment is unique, we need to be creative.

‘To get customers back into restaurants, cafes and pubs and protect the 1.8million people who work in them, for the month of August we will give everyone in the country an Eat Out to Help Out discount.’

Brit champion pole dancer hanged herself after ‘struggling’ in lockdown

Girl, four, hanged herself when bike helmet became stuck in a tree