‘I call on ALL American’s to calm tempers’: Trump issues statement calling for ‘NO violence, NO lawbreaking and NO vandalism’ but does NOT address MAGA supporters directly

President Donald Trump issued a White House statement on Wednesday calling for no more violence amid reports his supporters could try and disrupt Joe Biden’s inauguration.

His pronouncement came while the House of Representatives debated impeaching him a second time and House Republican Leader Kevin McCarthy urged him to accept responsibility for last week’s MAGA riot.

‘In light of reports of more demonstrations, I urge that there must be NO violence, NO lawbreaking and NO vandalism of any kind. That is not what I stand for, and it is not what America stands for. I call on ALL Americans to help ease tensions and calm tempers. Thank You,’ the statement read.

The White House blasted the statement out to its press list after Twitter, Facebook and Instagram froze Trump’s social media accounts for inciting violence. Spokeswoman Kayleigh McEnany also tweeted it from her official press secretary account and the Trump campaign texted it to followers.

The statement contained several words in ALL CAPS – which was a regular feature of Trump’s tweets. 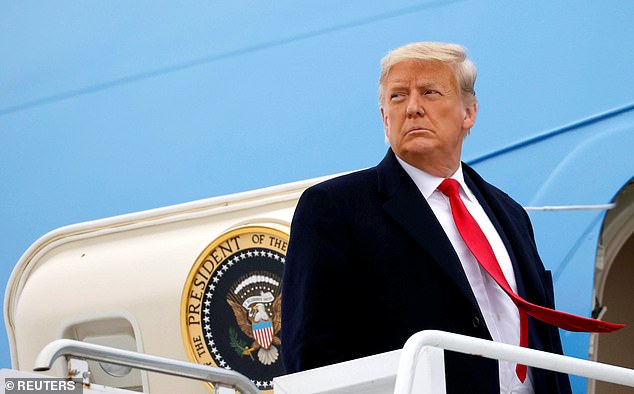 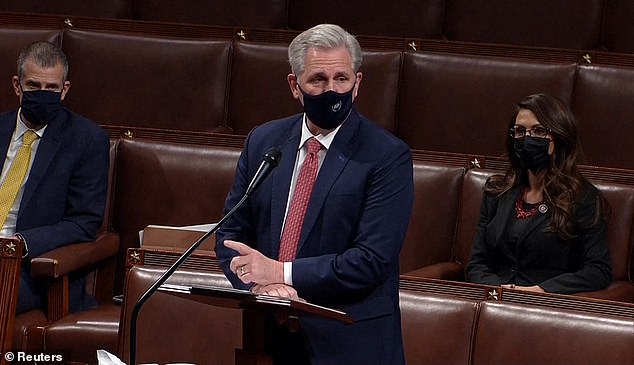 Republican Leader Kevin McCarthy, in a statement on the House floor, called on Trump to accept his share of responsibility for last week’s MAGA riot 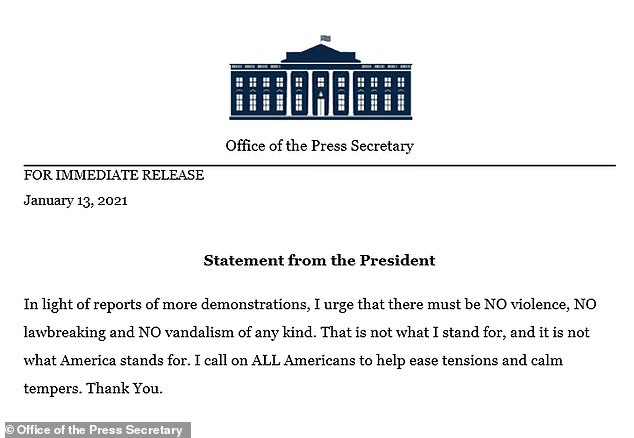 Security has visibly increased on Capitol Hill ahead of January 20th, when Biden takes the oath of office. An eight-foot anti-climbing fence has been installed around the Capitol Complex and has been extended down the National Mall, the area where a president-elect’s supporters watch him be sworn in.

The FBI has warned of armed protests being planned in Washington and all 50 state capitals in the run-up to the inauguration, including three separate plots to attack the Capitol.

‘The FBI received information about an identified armed group intending to travel to Washington, DC on 16 January,’ read a memo, a copy of which was obtained by ABC News. ‘They have warned that if Congress attempts to remove POTUS via the 25th Amendment, a huge uprising will occur.’

There will also be no public access to the Capitol grounds during the inauguration. And officials are increasing the number of National Guard members who will be deployed in Washington from 15,000 to 20,000, about three times the number of U.S. troops currently deployed to Iraq and Afghanistan combined.

About 3,000 National Guard troops bunkered down in the Capitol on Tuesday night, with MREs and water bottles on hand, sleeping on camouflage blankets on the cold, marble floors.

Hundreds of National Guard members, who were deployed to D.C. in the wake of last week’s MAGA mob riots, were spotted cradling their rifles and riot gear as they slept.

Trump’s call for peace also came as the House was debating impeaching him for a second time with at least six Republicans planning to support the resolution.

The charge is inciting violence with last Wednesday’s attack on the Capitol by pro-Trump insurgents.

And if followed a statement from Republican Leader Kevin McCarthy, who, while speaking on the House floor, called on Trump to accept his share of responsibility for last week’s MAGA riot, which resulted in five dead and destruction in the Capitol.

‘The President bears responsibility for Wednesday’s attack on Congress by mob rioters,’ McCarthy said. ‘He should have immediately denounced the mob when he saw what was unfolding.’

‘These facts require immediate actions by President Trump: Accept his share of responsibility. Quell the brewing unrest. And ensure President-Elect Biden is able to successfully begin his term,’ he added. 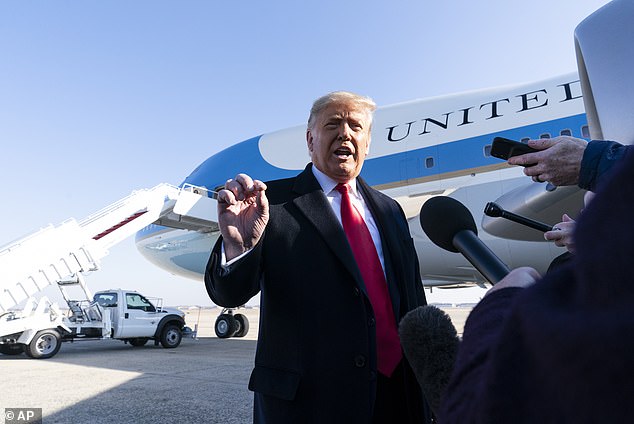 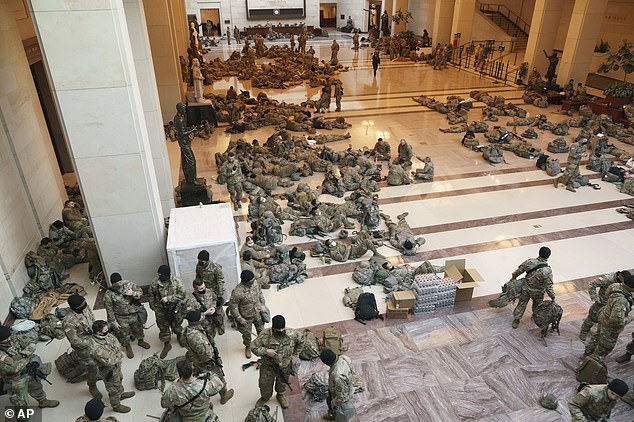 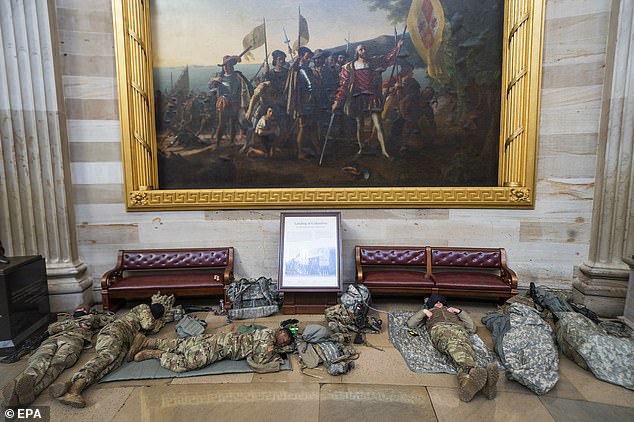 Trump on Tuesday denied all responsibility for last week’s riot, saying his fiery speech to his supporters before they marched on the Capitol was ‘totally appropriate.’

In his first public remarks since Wednesday’s MAGA storming of the Capitol, the president slammed Democrats, accusing them of creating ‘tremendous danger’ with their attempt to remove him from office but said repeatedly he wanted ‘no violence.’

The president defended his speech at a rally on ellipse, where he encouraged his thousands of supporters to ‘march’ on the Capitol.

They did so, leaving five dead and a path of destruction in their wake in the form of busted windows, broken furniture and destroyed office space. Dozens have now been rounded up by police and FBI.

‘If you read my speech – and many people have done it and I’ve seen it both in the papers and in the media, on television, it is been analyzed – and people thought that what I said was totally appropriate,’ he said as he boarded Air Force One to head for Alamo, Texas, on the Mexican border, to inspect his wall.

‘They’ve analyzed my speech and my words and my final paragraph, my final sentence and everybody to a tee thought it was totally appropriate,’ he continued. He offered no indication of who ‘they’ are.

But, he said he wanted no violence from his supporters. Trump reportedly had initially enjoyed the sight of his supporters on Capitol Hill last week, fighting for him to illegally take a second term in the White House. He changed his tune and called on them to stand down when he warned he could be held legally responsible for their actions.

‘We want no violence, never violence. We want absolutely no violence,’ he said repeatedly Tuesday before he left for Texas to tout the completion of a section of his border wall.

‘And on the impeachment, it’s really a continuation of the greatest witch hunt in the history of politics. It’s ridiculous. It’s absolutely ridiculous. This impeachment is causing tremendous anger,’ he said.

He denounced Democratic leaders but made no mention of the Republicans who have called on him to leave office.

The House is expected to approve the impeachment charge in Wednesday afternoon’s vote. 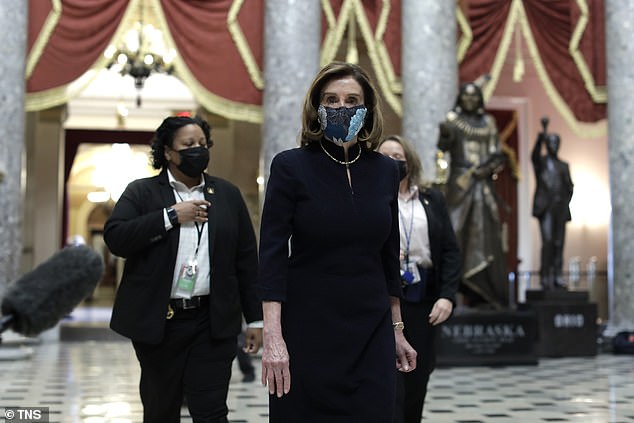 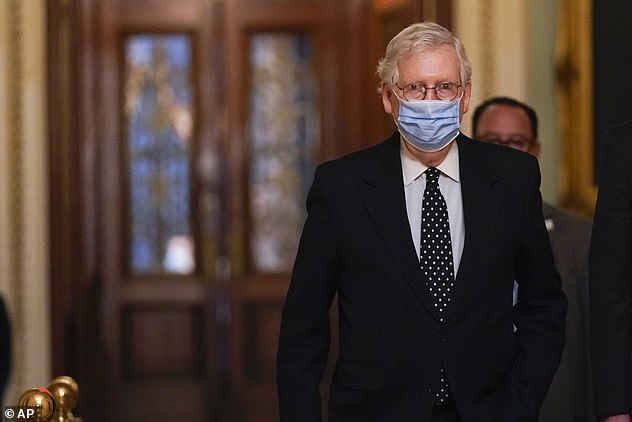 Senator Mitch McConnell’s office said Wednesday that the Senate will not come back early to hold Trump’s impeachment trial, meaning it will start January 19th 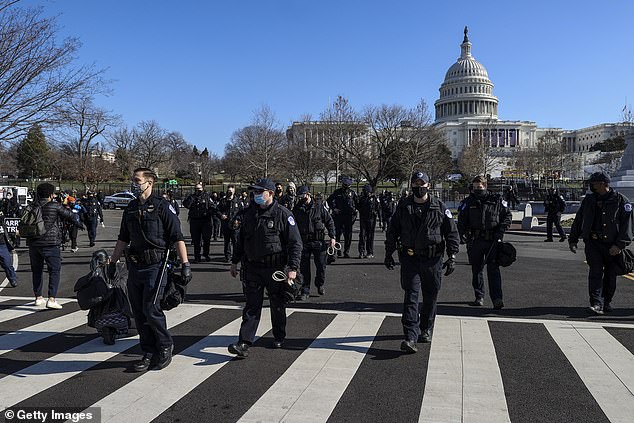 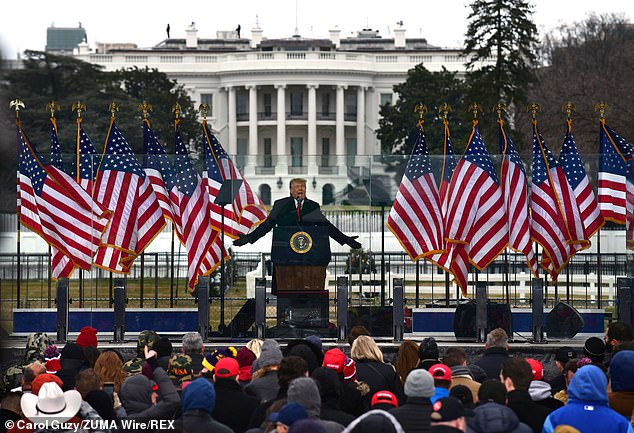 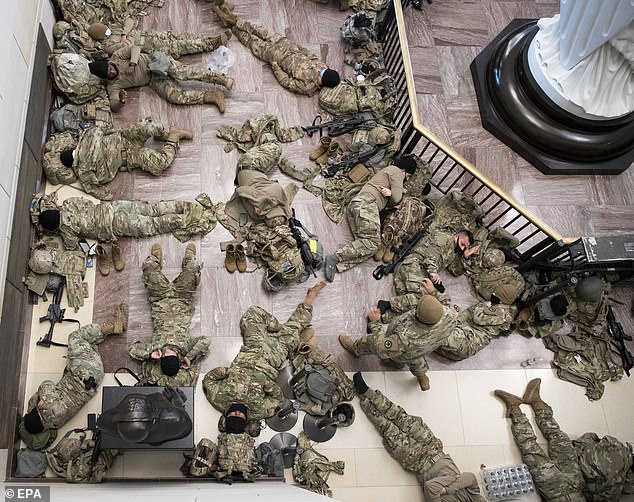 At least 10,000 troops will be deployed in Washington by the end of the week, with the possibility of five thousand more, to help secure the Capitol area ahead of more potentially violent unrest 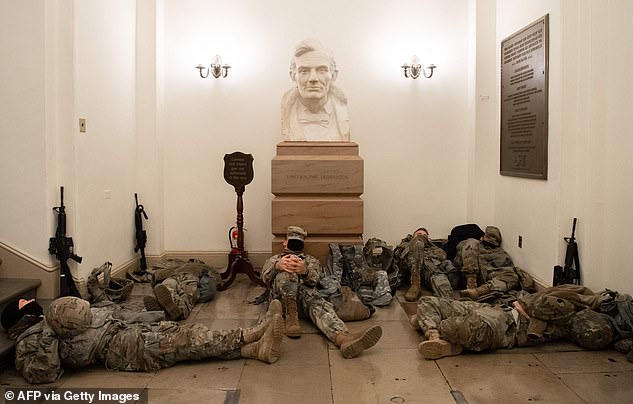 Guard members are pictured sleeping at the foot of a Abraham Lincoln statue; the last time U.S. troops stayed in the Capitol was during the Civil War

But Trump caught a break when Senate Republican Leader Mitch McConnell announced the Senate will hold off on the trial version of impeachment until lawmakers return to Washington D.C. on January 19th.

Trump leaves office January 20th, meaning the early days of Biden’s presidency will be taken up with his predecessor’s trial.

Senate Minority Leader Chuck Schumer had pressured McConnell to agree to bring the Senate back sooner under emergency circumstances with reports a trial could begin as soon as Friday.

But McConnell’s office shot down that idea, meaning Trump will finish out his term in the White House.

If impeached, Trump would not be able to run for president again. Several Republican senators are thought to be considering 2024 presidential bids.

To impeach Trump, a two-thirds majority is needed to convict him, meaning at least 17 Republicans would have to find him guilty.

And there’s a better than 50-50 chance that McConnell will vote to convict President Trump, according to a new report.

McConnell appears to be more set on convicting Trump in an extraordinary turn against the president in the wake of last week’s Capitol riot, which left five people dead and destruction in the Capitol.

A Tuesday night report from Axios cited a top Republican close to McConnell saying, ‘The Senate institutional loyalists are fomenting a counterrevolution’ to Trump.

McConnell has been signaling support for the House Democratic impeachment effort that includes an article charging the president with ‘incitement of insurrection’.

The news comes on the heels of a New York Times report that McConnell told associates he believes Trump ‘committed impeachable offenses’ and he’s ‘pleased’ by the move to impeach him.

McConnell worked successfully to scuttle the impeachment effort during a trial last year on different charges.

His current view follows reports that McConnell never wants to speak to Trump again after the Capitol riots that had Trump supporters invading the Capitol, trashing leadership offices, and endangering the lives of lawmakers.

McConnell backs the effort because it will make it easier to purge Trump from the party, the New York Times reports.

McConnell has made clear in private discussions that ‘now is the moment to move on the weakened lame duck, whom he blames for Republicans losing the Senate,’ according to the report.

Giant 'paperclip' squid may have lived for centuries